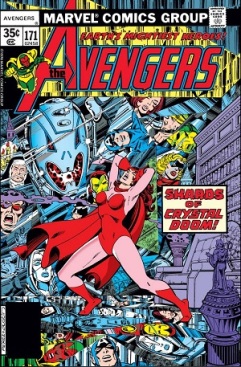 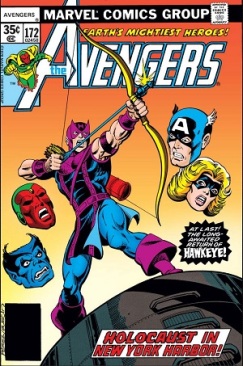 These three issues of Avengers return us to the Korvac Saga, begun in issue #167, but again with minimal involvement from Captain America (and, to be honest, very little to do with Korvac in the first two issues, which deal more with Jocasta and Ultron). In fact, the one image from issue #172 is simply to show what happened to him after he was… well, you’ll find out. Like the last post, much of the interesting content in this one deals with Cap’s aggravation at Iron Man, a theme that will continue and build for decades to come. (Bonus: One page from Thor #271 just for the Hel of it.)

In Avengers #170, we see where Cap huffed off to after the Scarlet Witch called him out during his fight with Iron Man in issue #168.

(Some folks wear sneakers in the gym, but whatever.)

Beast has little faith in the Sentinel of Liberty, especially since the uneven bars were clearly right below him…

…although his landing might not get high marks from the judges.

Seriously, though, below he reminds Beast (and the reader) that he has no longer has the super-strength he enjoyed for a spell, and was recently revealed to have worn off (as the note notes), and more important, that he took Wanda’s comments to heart (giving yet another explanation for his abrupt exit earlier). While most of his displays of humility take the form of deflecting praise, this one comes from accepting criticism (even if he didn’t show it immediately).

If Cap knew who was going to take Beast’s place, he may not have told him to leave. 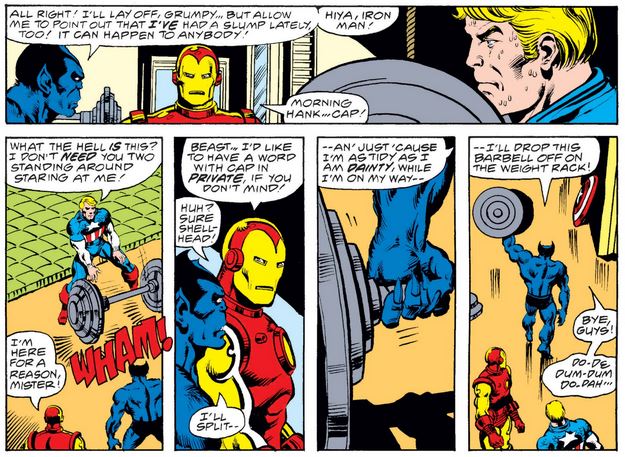 Tony’s that annoying guy at the gym who wants to chat while you’re trying to get your workout in before fighting the Red Skull again—although Cap’s nicer than most of us would be!

…and you just know Tony wants to take the credit, really bad. But to his credit, he sticks to his reason for coming, and they actually have a very mature discussion, both of them showing humility. (It looks good on you, Tony—you should try it more often, especially nowadays.)

Note how Cap links his criticisms of Tony’s leadership with his long-time concern with getting his teammates killed, a central character trait since his defrosting in Avengers #4. (And the very last panel again suggests that Cap might know Tony’s secret, not that he lets it on.)

That was the first three pages of Avengers #170… in the rest of the comic, Hank Pym has Jocasta, Ultron’s self-made bride (complete with Janet van Dyne’s brain patterns), moved to Avengers Mansion, but soon she is reactivated remotely by Ultron and attacks. She fights the other Avengers present until our two recently reconciled best friends come to… her defense?

As if that weren’t enough, Thor shows up—a bit confused, and not due to an excess of mead—and then Cap seemingly violates physics by deflecting Mjolnir with his shield, as he did in Avengers #111. (I don’t care how many times he does this or how cool it is—especially when he throws his shield while falling—I still don’t buy it.)

With no uneven bars to catch this time, Cap needed to be caught, and it is only right that Iron Man be the one to do it… and then he’s got some splainin’ to do. 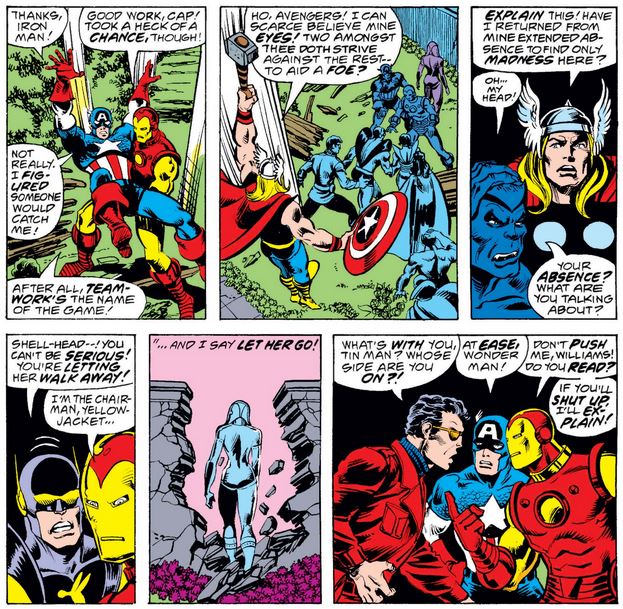 Tony explains that they want Jocasta to get away so they can follow her back to Ultron, which is exactly how issue #171 opens… with Cap (and Wanda) being as polite as normal, though the man Cap apologizes to is awfully cynical.

Wonder Man gets impatient, but Cap defends Iron Man’s decision and his authority to make it. (Either he has truly made up with Tony, or this is a case of “no one hits my brother but me,” no one except a fellow Avenger, at least—I mean, is Simon even a full member of the team at this point?) 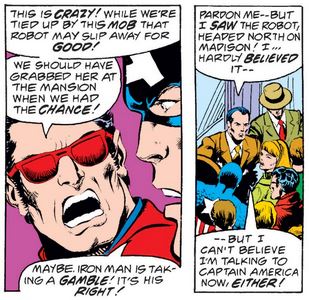 At least that guy makes up for the one fearing pickpockets!

And look who shows up for her first appearance with the Avengers… and with a power she must have lost when the mutant Rogue stole her powers years later (and never got back).

The Avengers and Ms. Marvel follow Jocasta to a convent, but before they find Ultron, they find the Scarlet Witch has vanished. Simon shows why he is the smartest Avenger of them all…

…and Cap reminds us all why he’s the best friend any Avenger can have. (Seriously, though, Cap was usually very supportive of other Avengers’ leadership, especially when he realizes they need it, and even when he probably knows he could do as well if not better.) 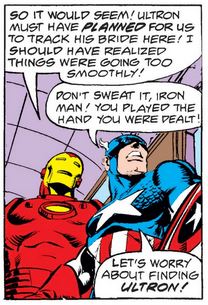 Jocasta eventually resists her creator, and when Ms. Marvel finds and brings back Wanda, we find out how Ultron took her off the board first, as she deals the evil android a decisive blow (as she did in the movie Avengers: Age of Ultron).

Afterwards, while the team licks their wounds and Hank Pym makes it all about him, Iron Man notices his BFF is gone, and Wanda has some inspiring words for the team in response.

Wherefore is Cap? We don’t find out until the last page of Avengers #172, but his abductor’s identity is still hidden. (Who would want to collect a bunch of superheroes? Who knows?)

In the next post, we’ll find out who this person who collects is—which isn’t revealed until the end of Avengers #173, in which Cap doesn’t even appear—when we wrap up the last four issues of this storyline (Avengers #174-177) and four more just for good measure (and so we’ll have enough to talk about to justify a post!).

In Thor #271, the Avengers and Nick Fury face the ominous threat of the sentient computer FAUST (Fully Automated Unit of Structural Technology), and although Thor and Iron Man are the natural choices to fight it, Cap expresses the “all of one, one for all” sentiment we would expect.

Like The Invincible Iron Man, The Mighty Thor, and The Uncanny X-Men, maybe someday Cap will get an adjective in his title, such as The Reluctant Captain America.

All collected in: Avengers: The Korvac Saga, Guardians of the Galaxy: Tomorrow’s Avengers, Vol. 2, and Marvel Masterworks: The Avengers Volume Seventeen.

Collected in: Thor: Gods, Gladiators, & the Guardians of the Galaxy and Marvel Masterworks: Thor Volume Seventeen.