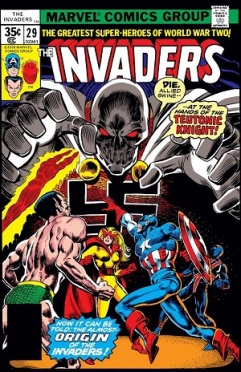 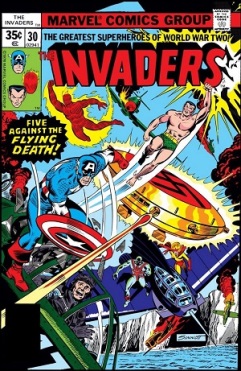 These three fill-in issues, written by future Invaders scripter Don Glut and drawn (with the exception of issue #31) by now-regular penciller Alan Kupperberg, contain little material relevant to Captain America’s ethics, so this will be a quick post. The first two claim to tell the story of the Invaders’ first meeting (even before their previous first meeting), and the third is more than it appears from the cover, actually making an interesting link between a creature of literature and one of the Invaders (who is also a creature of literature, I suppose!).

I’ll break protocol a bit here and start with the opening splash page from issue #30, which (nicely for us) recaps issue #29, an issue that consisted primarily of the proto-Invaders facing the villainous Teutonic Knight separately in flashback after they learned he had returned in the “present day.”

The only relevant panels from issue #29 are during Cap and Bucky’s battle with the Knight, where we see them make the obvious choice to save American soldiers and let the Nazi get away. 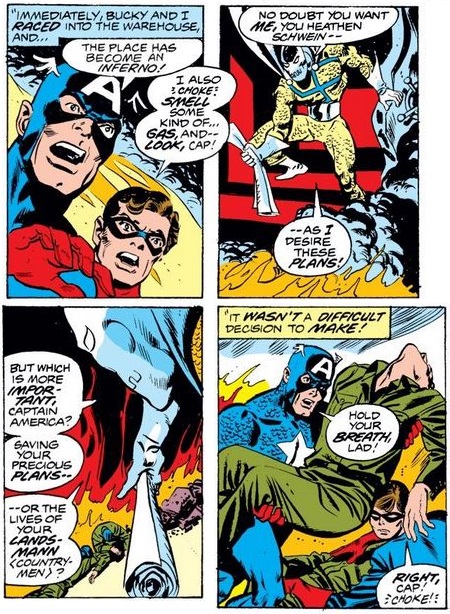 Back in issue #30, after recounting their early encounters with the Teutonic Knight, the Invaders now face off against him and his flying machine, the Fliegentod. Cap and the Torch urge Namor is be careful, and the famously calm and serene Sub-Mariner is offended that his good friends would doubt his patience.

The Knight obviously knows what works, so he again takes a hostage—this time, a human one…

…and reveals the depth of his sinister plan. 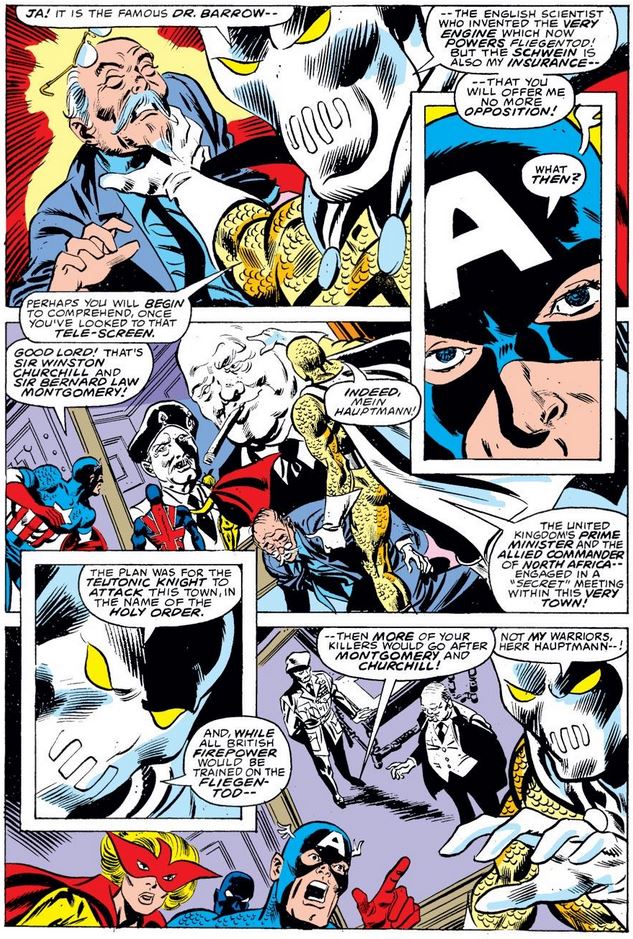 It seems the increased stakes make Cap more willing to take a chance with Dr. Barrow’s life, which serves as an example of justified compromise of moral principle in the face of rising cost of inaction, reminiscent of threshold deontology, discussed on pp. 131-136 of my book. (Think of the standard trolley problem and how a person’s position against pulling the lever might change as the number of riders in danger grows.)

Finally, in issue #31, Cap tells Spitfire yet another story from “the old days” (that is, a year ago—we really don’t have “old days” yet back then), this one invoking a famous name from science fiction (thanks to Mary Shelley). While investigating reported Nazi activity in the Swiss Alps, Cap and Bucky are told by villagers of strange goings-on, including murder, grave-robbing, and two flying demons heading to Castle Frankenstein… the last of which Cap can easily account for.

Of course, being a literary fella, Cap was finishing Dr. Basil Frankenstein’s name, not calling the creature Frankenstein. (No one would dare do that, lest the pedants attack.) Of course, this creature does resemble the creature from Shelley’s novel (as well as Boris Karloff’s movies), especially in one key respect:

It turns out that Basil Frankenstein (introduced as a baby in July 1974’s Frankenstein #11) is a descendant of the famous Dr. Victor Frankenstein of the novel (and comic), but the younger Frankenstein is a Nazi who wants to build monsters to fight for the Third Reich—and he has captured the Human Torch to siphon his “android energy” to make his creatures… bigger. (That’s it, just bigger.)

When Namor frees his fellow Invaders, they all fight the embiggened creature, but one of them is hesitant to harm him… and it’s easy to understand why. (Well, unless you’re Namor.)

As in the novel, the creature was not the true monster, and he ends up killing himself out of self-hatred for what he is, taking Basil and his assistant with him.

And Namor… still doesn’t get it, but after the Torch’s speech to the villagers below… well, I wouldn’t be sure he does even then.

That’s right, dear readers: Thor meets the Invaders in the next issue (and post)!