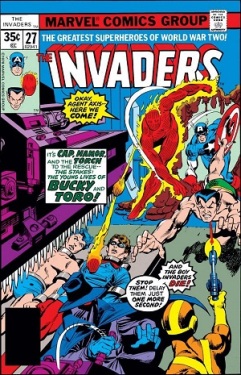 These three issues focus more on Bucky than Captain America, but the historical background is of such importance that I’ll feature many panels without Cap nonetheless. (Fair warning: Some of the images and terms in this post are very disturbing, and the reason why will be clear very soon.) Also in these issues, two of the Invaders leave the team to form a new group with two new heroes. (If nothing else, this guarantees Cap more coverage in future posts!)

As previewed at the very end of the last post, the historical context of this tale is made clear in the opening splash of issue #26. 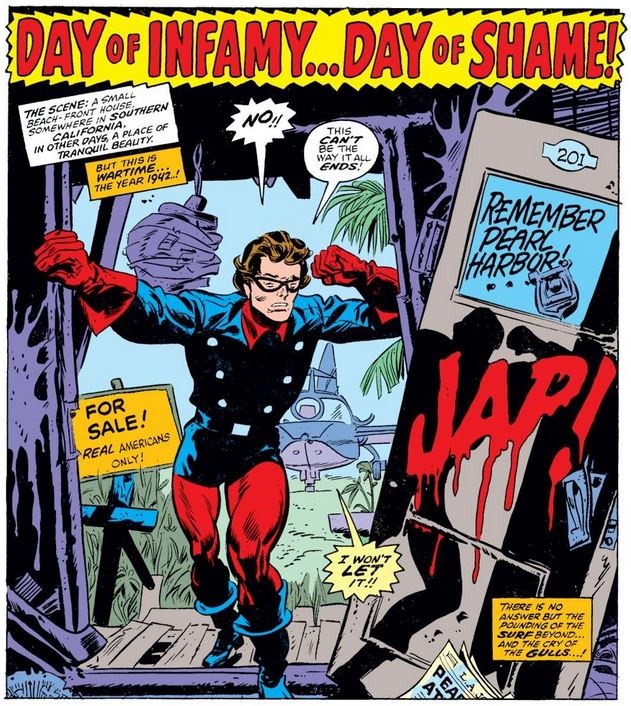 Although he’s angry at the evidence of Japanese Americans having been taken to internment camps, I think Bucky is more personally upset at the fact that the one surgeon who can save his friend Toro is among them.

When he arrives at the camp, Bucky minces no words at what he sees, and even though he realizes the danger that Japanese spies represent, he sees the internment as overly broad and inhumane.

When Bucky is taken to Captain Simms to plead for the surgeon’s release, we see the blatant racism behind this “security measure,” to the extent that Simms does not want a Japanese doctor to operate on a “real American.” (I wonder what he’d say if he knew Toro was a mutant—that not I think people in the Marvel Universe were widely aware of mutants at this time.) Bucky calls this out for what it is, speaking for the readers (and certainly this blogger).

After fighting through a number of MPs, Bucky storms into the camps and remarks on the crowding if not the squalor.

After an interlude with the rest of the Invaders (which we’ll return to shortly), Bucky finally finds the doctor and his daughter.

Doctor Sabuki is heroically willing to try to leave with Bucky, with Gwenny Lou is more resentful, at which her father points out the tragic nature of their circumstances, being American citizens held captive by the American government because of their names and background.

But before they can attempt escape, a subterranean vehicle bursts into Sabukis’ “room,” and after Bucky and Gwenny Lou lose their fight with the agents inside, the leader reveals himself to be…

Agent Axis takes Bucky and the Sabukis away in his machine for purposes to be revealed in the next issue. Meanwhile, let’s catch up with the putative star of this blog and his fellow adult Invaders, who reunite with Lord Fallsworth (the original Union Jack from World War I) and Dyna-Mite, the doll-sized member of the Crusaders who has since “grown up” and decided to get himself a new superhero identity, which used to belong to Roger Fallsworth, the current Union Jack. (Got that?)

In issue #27, Agent Axis takes his captives to hospital where Toro is waiting for Doctor Sabuki, who is “asked” by Axis to cure him of his unique condition. Just before they get there, though, a young man named Davy Mitchell stumbles upon his hero in the hospital.

(We’ll see him again very soon.) Meanwhile, when Axis makes his demands clear to Sabuki, the good doctor makes his loyalties clear, even though they have been betrayed. 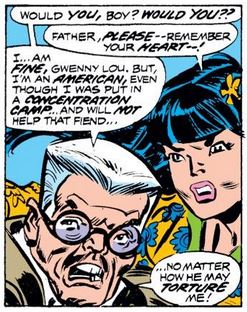 When Bucky and Gwenny Lou decide to fight back, they’re joined by Davy. (Hmm, they make quite a team, don’t they?)

Axis’s threat gets Bucky and Gwenny Lou to surrender, and Dr. Sabuki agrees to work on the villain if the kids are spared.

While this is going on, the three main Invaders have arrived at the internment camp looking for Bucky, and Cap is horrified by what he sees, making the obvious link between fascism abroad and fascism at home. 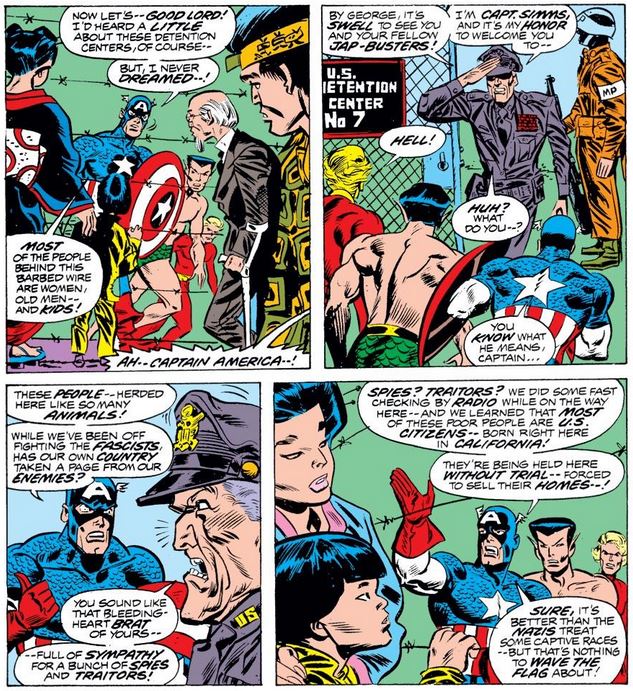 Can’t add anything to that, other than that all people, not just citizens, deserve humane treatment and due process. (And kudos to Cap for anticipating and countering the argument that “other countries treat people worse.”)

While Agent Axis transports his captives (including Toro) to his underground lair, Bucky, Gwenny Lou, and Davy get to know each other better, and Bucky is forced to confront even further what the internment camps mean, hoping their injustice will soon be acknowledged (which took much longer than it should have).

At his lair, Dr. Sabuki operates on Toro, saving his life, and then Agent Axis prepares for his own procedure, going to extraordinary lengths to make sure the doctor doesn’t sabotage his own work.

Sabuki does defend his choice to his daughter by recourse to a noble principle—one that a lesser person might have abandoned after the recent experiences he’s had.

Bucky and Toro attack Agent Axis’s goons, who fire wildly and hit the machine, sending electrical energy through Gwenny Lou and Davy, giving them both powers.

The three adult Invaders finally catch up to their sidekicks at the end of the issue, and they all fight Agent Axis and his men in issue #28…

…with Cap registering his approval.

After the battle is over and Agent Axis is captured, the Invaders welcome each other back and reunite, but Bucky has other plans for himself and young allies.

Gwenny Lou and Davy find outfits in a chest on Namor’s flagship—which raises just so many questions that are never answered—and the Golden Girl and the Human Top are born.

To everyone’s surprise, the Invaders return to the internment camp, where Captain Simms insists the Sabukis return to their imprisonment. Gwenny Lou refuses, which Simms grudgingly accepts (given her new connection to Cap), but her father chooses to remain to help care for the other inmates. 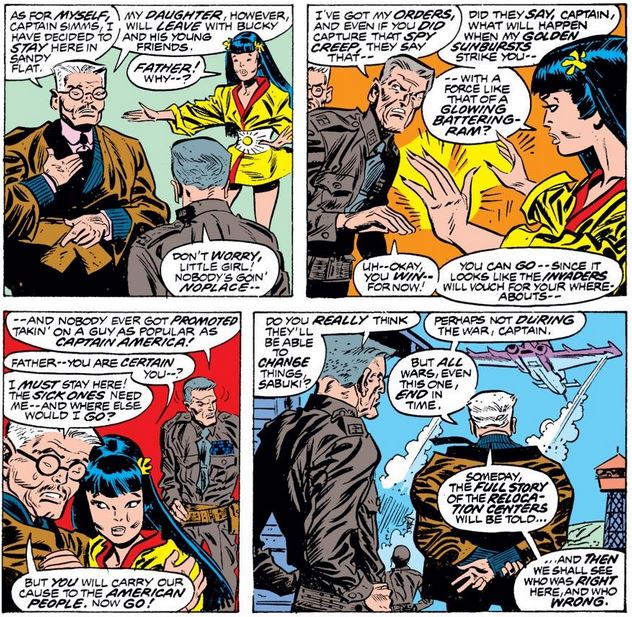 I don’t know if the full story can ever be told, but much of it has—for instance, see here and the books listed here. The important questions remain: Have we learned anything since? Have we learned enough?

In the final panels of the issue, the young heroes reaffirm their plan to stay in the States as the Kid Commandos, fighting threats foreign as well as domestic. 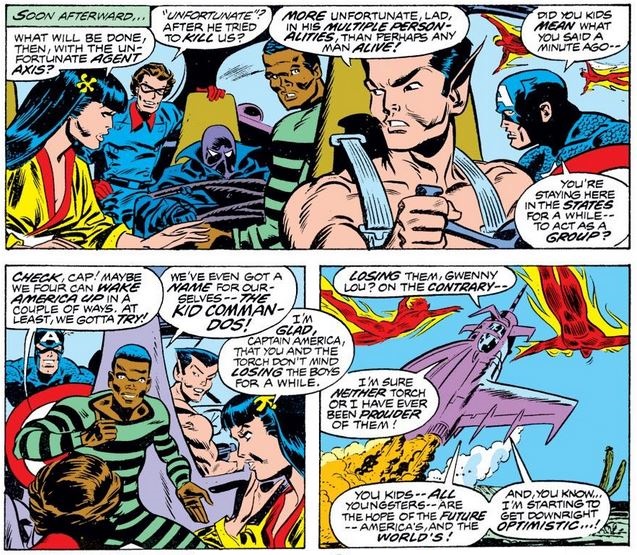 From this point on, Bucky and the rest of the Kid Commandos feature much less in this title, showing up once more in issues #38-39, and leaving the rest of the title to the grown-ups.