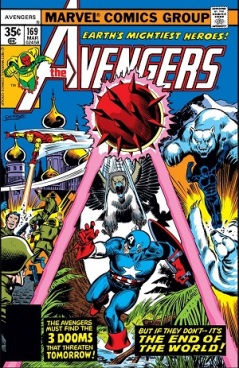 The first two of these three issues comprise the start of the “Korvac Saga,” a ten-issue storyline in Avengers in which Captain America does not play a very prominent role, so I will primarily be highlighting character moments with less synopsis than usual. In this two issues in particular, we see Cap’s first significant conflicts with Iron Man, signalling that the honeymoon may be over. The third issue is a fill-in story highlighting Cap, Tony, and Black Panther that doesn’t continue the conflict, but has some nice Cap moments nonetheless (and a terrific opening splash page).

Issue #167 opens with the latest emergency, and we learn that Cap sleeps in really late. (I don’t think I’ve slept until 6 AM since I was… I don’t know… six?)

When Nick Fury reveals the emergency—not the space station below, but the relatively little thing floating in front of it—Cap utters a quaint invocation of traditional American concerns (more traditional, at least, than the Beast’s trademark “oh my stars and garters!”).

When the Avengers mobilize to investigate the strange object, though, one Avenger is conspicuously late… and Cap is none too happy about it. 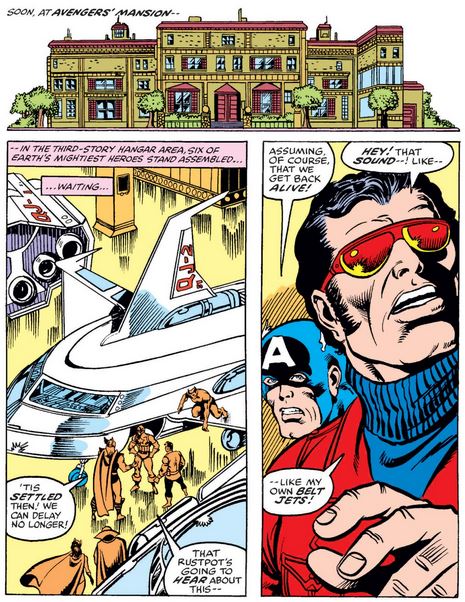 As I said at the beginning of this post, this won’t be the last time Cap blows up at Tony before the story is over. For now, though, he’ll rest content with taking charge, even though Iron Man is the current Avengers chairperson… 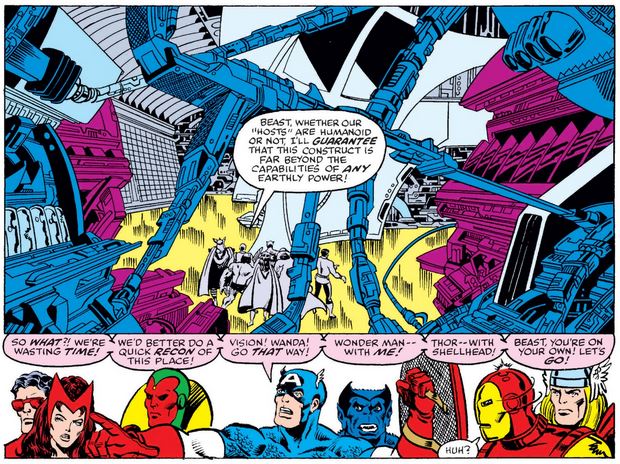 …and Iron Man definitely notices, admirably thinking not only of his own bruised ego but of the mission as well. (It’s also nice to see Wanda’s respect for Cap mentioned, stemming from their early days together in “Cap’s Kooky Quartet,” although it will be tested soon enough.)

It isn’t long before the Beast stumbles on the inhabitants of the celestial object, who are none other than the original Guardians of the Galaxy, whom, as Cap tells the group below, he met in Marvel Two-in-One #4-5 (a meeting he dutifully recorded in the archives, for all the good it did).

As the teams greet each other, Cap respectfully introduces Iron Man as their current chair, whatever he thinks of his service of late (about which we’ll see more soon).

(That’s Nikki Gold, by the way, coming on to Thor. We’ll see more of her later too.)

The Guardians and Thor recount their latest adventure (in Thor Annual #6), involving Korvac, a cyborgnetic ruler from the future who has traveled back to 1978 to kill Vance Astro (the starstruck fella above) before he can travel to the future and found the Guardians, who resist Korvac’s rule.

In issue #168, the Avengers and the Guardians (with the exception of Astro, who fears the ramifications of meeting his younger self) head back to Avengers Mansion, and Cap seems more concerned than Iron Man does that Jarvis doesn’t reply to their hails.

(Darling Nikki… you don’t mince words, do you?)

Cap and Tony continue to disagree about the impending danger…

…and it turns out Cap was right (although I trust he wishes he weren’t), and he lets Tony know it.

The Avengers soon meet their new best friend—although they’ll end wishing it had been Ultron instead.

Gyrich, who has been sneaking around since issue #165, will go on to serve as the liaison to the Avengers on behalf of the US government and the United Nations for years to come. (He does not make a good first impression, but to be fair, it is an accurate one.)

For now, Gyrich is appalled, appalled, by the Avengers’ lax security. 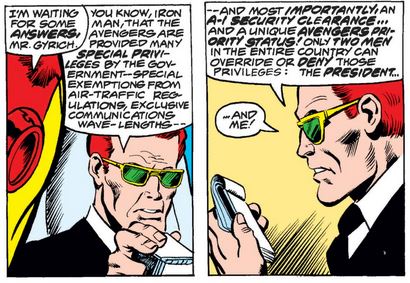 Again, Wanda knows Cap very well. (I always appreciate allusions to their long-time friendship, and I only wish there were more.) However, even she may not guessed that Cap’s raw nerve ends at a certain Avenger’s armor… until he shows her (and everyone else).

The panels above remind us that Iron Man’s secret identity is still a secret from most of the Avengers at this point… although I suspect Cap would be even more angry if he knew that his fellow Avenger was not just Stark’s bodyguard but Stark himself, with all of his other responsibilities.

When Tony cites statutory authority—Matt Murdock would be so proud—Cap loses it, going overboard by questioning Shellhead’s motives (and showing us that Tony’s helmet makes a KANG! sound when you punch it).

When Cap and Tony threaten to come to blows, the Scarlet Witch steps in and gives her old friend Cap a piece of her mind, reminding him of his own recent absences from the team (although, to be fair, he isn’t the current leader of the team).

Cap concedes—although his sincerity, unfortunately, must be questioned—and storms off to have a workout (as we’ll see in the next post). We might accuse him of immaturity for  leaving as he did, but perhaps he realized that he had lost control and needed some time (and exercise) to calm down.

The Korvac Saga picks up again in issue #170 (with which the next post begins), but in the meantime we have issue #169, a fill-in issue, which opens with a much more tranquil scene with Cap, Tony, and the Black Panther, all engaging in most virtuous pastime (which, surprisingly, has nothing to do with the ominous title to the story).

(I’m sure that’s the only answer Tony didn’t know, uh-huh.)

No sooner is the task at hand completed than a mysterious foe clad in verdant armor barges in—confirming Gyrich’s opinion of the mansion’s security—and attacks our three heroes, who seem to work together well at the moment. (Those more knowledgeable than I place this story somewhere in issues #162-164, which would be prior to the current tensions between Cap and Tony.) 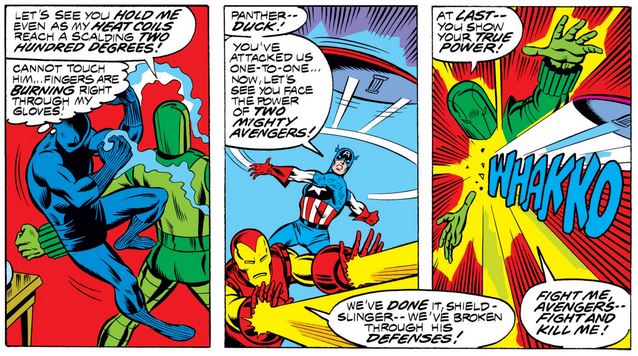 Cap picks up on their foe’s last statement and tries to call a stop to the fighting, but Tony keeps on keeping on.

It’s obvious to all by now that the green man (not this green man, nor this one) has a death wish, and Cap feels he must stop Tony from granting it, though Tony claims to know what he’s doing.

To make a short story even shorter, beneath the armor is Jason Beere, one of Tony Stark’s competitors, who is dying from heart failure and wants the world to die with him, so he has four bombs linked to explode when his heart stops. (He sure makes Tony look better, huh?)

The three Avengers split up to find the bombs, which gives us a solo Cap story for the rest of our coverage of the issue. 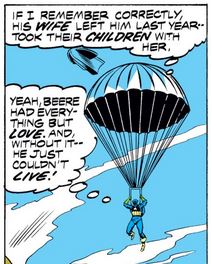 While Cap flies to Peru to find one of the bombs, he contemplates Beere’s plan, musing on the irrelevant nature of worldly pleasures and desires and emphasizing the central importance of love (as we see in the partial panel to the right). Cap seems a little too sympathetic here: After all, it’s Beere’s failing heart that is killing him, not the loss of love, and it was his choice to take the world with him when he dies, including his children and ex-wife.

When Cap tries to retrieve the bomb from a temple, he finds the local bird-worshiping natives protective of it, having been forewarned of his arrival. 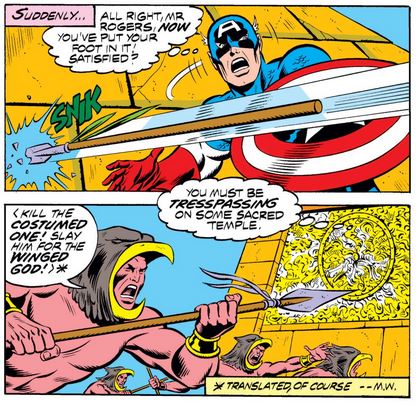 Cap is also sympathetic here, and more justifiably so, to the Peruvians’ religious beliefs, but makes the judgment call that his mission to save the world is more important (while not dismissing the importance of their concerns).

When one of the locals tries to shoot Cap with a poison dart, Cap spins at just the right moment, and the dart ends up in someone else, but Cap rests easy that they have antidotes before delivering a silent soliloquy on his refusal to kill—one that is very similar to the main reason given by a certain caped crusader, putting the preservation of his own moral virtue above the causes he is sworn to protect. (For more, see chapter 6 of Batman and Ethics.)

Although Cap is generally a more virtue-oriented character than Batman is—and is definitely more protective of his role as a symbol, as seen in the second panel above—he doesn’t often give the same reason for refusing to kill that Batman does, preferring to emphasize the conflict of principles along more deontological lines (as we’ll see in later instances when he confronts this issue).

As for the story… the Avengers find the three bombs but not the fourth, and Tony realizes the fourth is actually in Beere’s heart, so he freezes him to keep him alive so it doesn’t explode. (Apparently the bomb in his heart is powerful enough to destroy the world, and apparently they can’t take Beere off-planet or to another dimension and let it explode… or they would have, I guess. I don’t know.)

Both collected in: Avengers: The Korvac Saga, Guardians of the Galaxy: Tomorrow’s Avengers, Vol. 2, and Marvel Masterworks: The Avengers Volume Seventeen.