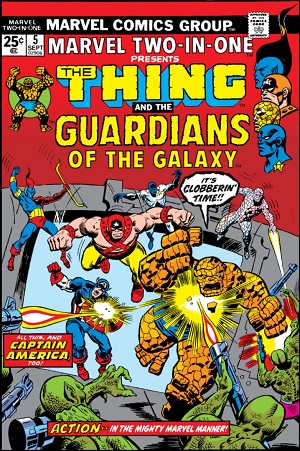 This two-parter represents Captain America’s second appearance in a Marvel team-up title, this time in the ever-lovin’ blue-eyed Thing’s book Marvel Two-in-One. This story also fits in between Captain America #175 and 176, after he had learned the extent of the Secret Empire’s reach into the highest echalons of the American government, but before he had decided what to do about it—not that this was referenced in this story, unlike the interregnum issues of Avengers #125 and 126. (This is an exception to what I said in the post of Marvel Team-Up #13 about Marvel’s team books being more tied into current storylines than DC’s were, although there were ongoing storylines throughout much of MTIO itself.) Instead, we get a fun and decidedly wild story of Cap, the Thing, and, in issue #5, the O.G.G.—the original Guardians of the Galaxy (with no one who looks anything like a raccoon).

Issue #4 begins with the Thing at New York’s Central Park Zoo with Wundarr, a child-like alien from space, a story thread running throughout the early issues of this title. Of course, guess who else is enjoying the zoo that same day—again, with no mention of his current existential crisis regarding his role as representative of the American dream when his faith in his country has been shaken. As he learned all too well, all the monkeys aren’t in the zoo—every day you meet quite a few.

Of course, he is Captain America, and this is a comic book, so a day in the zoo is never just a day in the zoo, especially when Wundarr innocently let the animals out of their cages. (Or you could say, things are not going his way.)

As usual, Cap acknowledges and appreciates the efforts of his fellow heroes, both above and below, and then notices a situation calling for his own talents… 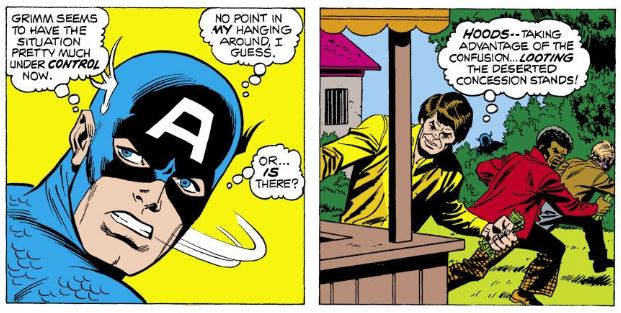 …and even gets a little sarcastic?

And then he gets a little grim (with one ‘m’), more like Dirty Harry or a certain dark knight detective than the Cap we’re used to. (Maybe this is his current mental state peeking through at last.)

Ben lets Wundarr leave with Namorita (cousin of the Sub-Mariner) and her friend, which sho-o-ocks Cap, who seems to have forgotten his trademark compassion as well. But coffee has a funny way of smoothing things over.

At the Baxter Building, Reed is as attentive to the world around him as ever…

…but once he realizes Cap is there, he makes sure to use his elastic powers to puff out his chest while he sits next to his hero. (“See what I can do, Cap? See? See? Are you looking, Cap? Look at me, Cap! I’m big now too!”)

Yes, I would expect good conversation to be “all too rare among men and women of the heroic breed,” especially when the women of heroic breed are sent to fetch the coffee. (Sigh.)

It isn’t long before a mysterious stranger suddenly appears in Reed’s lab, a woman named Tarin from the 31st century where super-heroes are not legion, but there are a few Guardians of the Galaxy.

(Sure, Reed has a great track record sending people off on missions he isn’t fully prepared for… what could go wrong?)

As we would expect, Cap leaps into the fray, with Sharon right behind him (“men and woman of heroic breed” indeed), even if she has to remind Ben who she really is. 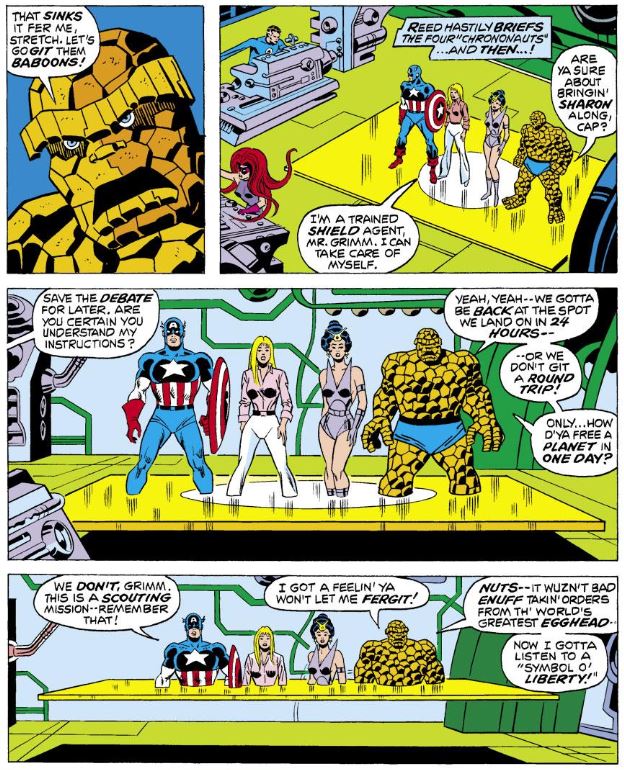 Sentinel, Ben… it’s Sentinel of Liberty. (Does he even read this blog?)

Soon after arriving in the year 3014, our heroes are attacked by the Zom. Who are the Zom, you ask? Well…

(I’ve “heard” it a thousand times, but I still smile every time Ben says that.)

Eventually, the Zom are joined by the Monster of Badoon. (Unimaginative naming there, but they all can’t be winners… not like the Zom.) Together, they manage to defeat our heroes, with the Zom taking advantage of Cap being momentarily distracted by Sharon being struck.

As issue #5 opens, we see where the Zom took their captives… to a not-so-secret Empire!

Of course, Lord Drang—the Badoon on the thr-oon—recognizes strength of will when he sees it, and when he invokes the notion of a sovereign, the living symbol of democracy kicks into gear.

The memory probe was a crafty device to allow the storytellers to give a quick recap of the last issue’s events, back when funny books bothered to do that. (To be fair, modern Marvel books do have a text-based recap page, presumably because repeatedly reviewing plot details every 22 pages would get tiresome in the now-standard trade paperback collections.)

Once our heroes break free, Cap and Sharon learn that nobody tells Ben Grimm what to do with a car. 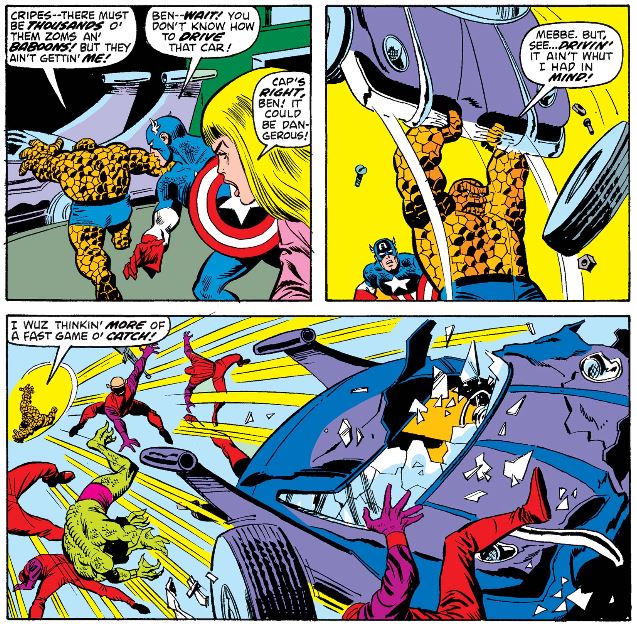 His impulse to provide advice of caution and restraint satisfied (and rejected), Cap receives the spirited exposition he has come to expect from his writers.

Oh yeah… what about the Guardians of the Galaxy, the erstwhile costars of this issue? Here they are, on page nine. 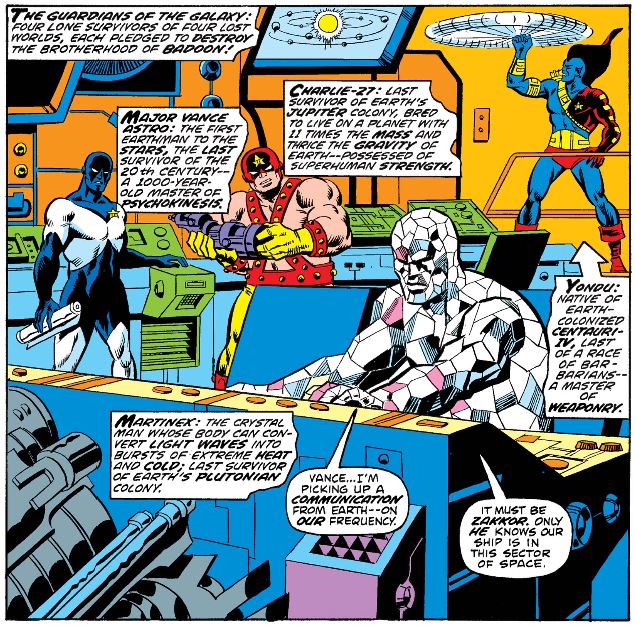 Not who you expected? Well no, these are the Guardians 1.0, originating in Marvel Super-Heroes #18 (January 1969) and making their second appearance here (after which writer Steve Gerber brought them into Defenders before writing most of their ten-issue run in Marvel Presents in 1976-77). You will, however, recognize Mary Poppins in the upper right-hand corner, and you might have caught a glimpse of Martinex in the second Guardians movie. Remember too that these Guardians are from the 31st century (although Vance Astro is originally from our time), whereas the more familiar crew’s adventures take place in the current day.

Astro, in particular, sees a familiar face while browsing unboxing videos on YouTube.

After the Guardians help our heroes fight more Badoon, Vance meets his hero and provides some background, revealing something they have in common. 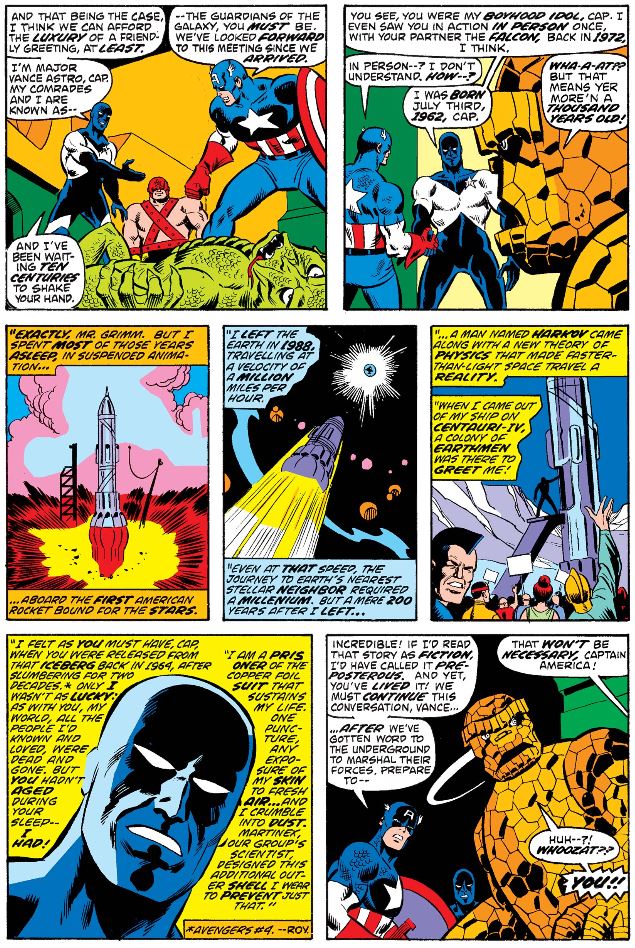 The next time Cap bemoans his own “man out of time” status, I hope he remembers to be grateful for his youth!

Just then, Tarin appears with some fellow warriors, whom Cap admires for their fighting spirit (while Astro just admires Cap).

Someday, Cap will learn that Ben Grimm isn’t one for careful deliberation and planning. But this will not be that day. (I would have liked Cap to make a crack about flyboys being impulsive, but oh well.)

After an intense battle, Tarin and the underground capture Drang (although Sturm is yet unaccounted for), and Cap gets in a few final words about humankind’s instinctive resistance to tyranny.

For a different take on Marvel Two-in-One #4, listen to episode 182 of the Fantasticast, featuring yours truly alongside two much funnier and more knowledgeable fellas.