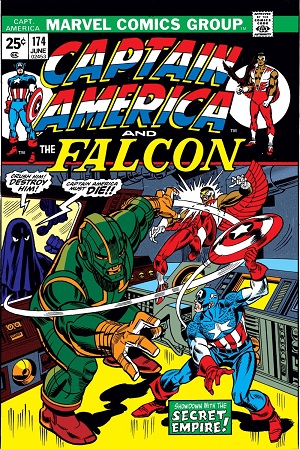 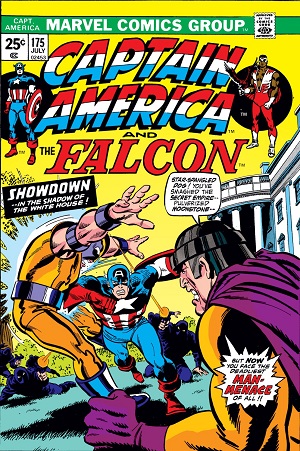 These two issues close out the “Secret Empire” storyline, as all is revealed, including the identity of the evil organization’s leader. This leads to a different kind of existential crisis for Captain America that culminates in the next issue and will be traced out throughout the next extended storyline.

At the end of issue #173, Cap and Falcon—in disguise as rubes Roger Stevens and Willie Samuels—earned their way into the Secret Empire by stealing an electron-gyro (while leaving a note explaining why they did it), with Professor Xavier, Marvel Girl, and Cyclops of X-Men trailing close behind.

Meanwhile, Cap takes a chance to reminisce (leading into a longer recap for new readers)—note how this episode is leading him to question his general attitude of trust in people (and theirs in him), and also acknowledging the power of the manipulation of information… and all this before the existence of social media. (Quite the statement in the first bubble in the final panel.)

Before long, our heroes meet Number One. (“You are Number Six…” Up the irons!)

Number One graciously explains his evil plan, including how CRAP, Moonstone, and Captain America all fit into it.. none of it a surprise by this point.

Note that Number One mentions Watergate, which he find “fortuitous,” and was actually unfolding in the real world as writer Steve Englehart was crafting this story. (In his opening text piece to Marvel Masterworks: Captain America Volume Eight, Englehart lays out the timing of the key real-world events along with his development of the events in the story.)

Once Number Thirteen shows Cap and Sam their room, Sam gets a feeling that they were made. Kudos to Cap for trusting Sam even when he was literally hearing voices… specifically, Professor X’s psychic warning, sent after he probed the Secret Empire headquarters.

Remember Mr. Black, the boss of the factory from which they stole the electron-Gyro, and how it seemed he believed them after they left the note? Well, he did believe them, but… 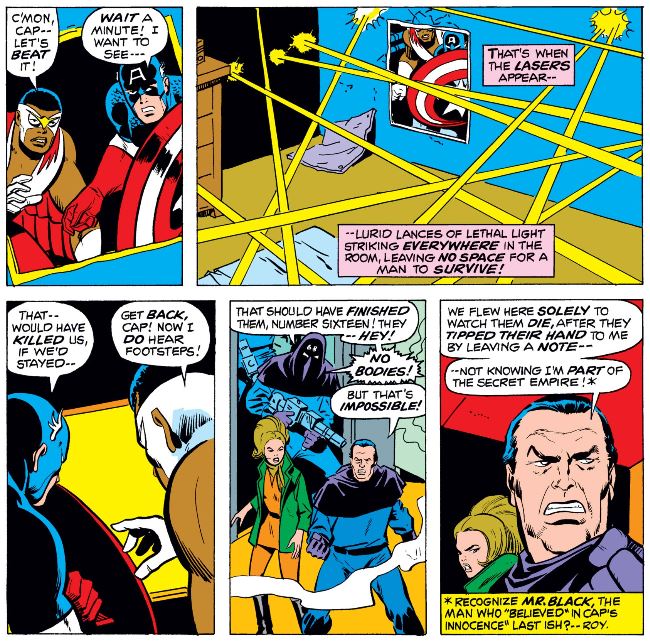 Maybe Cap was right that he’s been too trusting, hoping that there were still people on his side—which there are, no doubt, but the problem is that it’s very difficult to tell them from the ones who aren’t, as he realizes below. 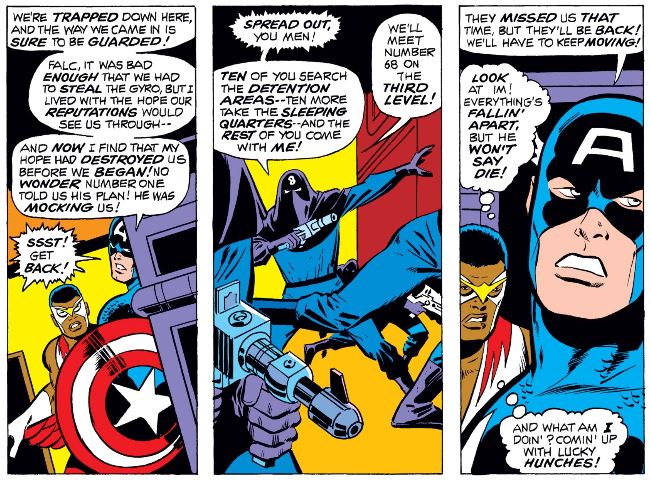 Nice of Sam to note Cap’s perseverance in the face of despair… though he doesn’t yet know his “hunch” was more than mere luck.

Cap and Sam manage to escape (after fighting a giant robot, of course) and, after connecting with the X-Men, together find the group of mutants (X-Men and Evil Mutants alike) who were abducted by the Secret Empire… who aren’t very happy about this latest development, and everybody fights!

At least Cap has something to take his mind off the deeper implications of the episode that were bothering him earlier! And after Professor X tells Jean Grey to be careful and she dismisses it, the exposition tells of the relief of all of our heroes, including the subject of this very blog.

Despite their heightened spirits, however, Number 68 brings out the Atomic Annihilator, which easily knocks out our heroes—pretty tame for something called an Atomic Annihilator, but then again, it ain’t the Ultimate Nullifier—seemingly leaving them at the mercy of Number One, who promises to deliver the same fate in America.

As issue #175 opens, Number One has our heroes taken to the dungeon of the Secret Empire headquarters, and Cap is the first to be roused… by welcome faces. 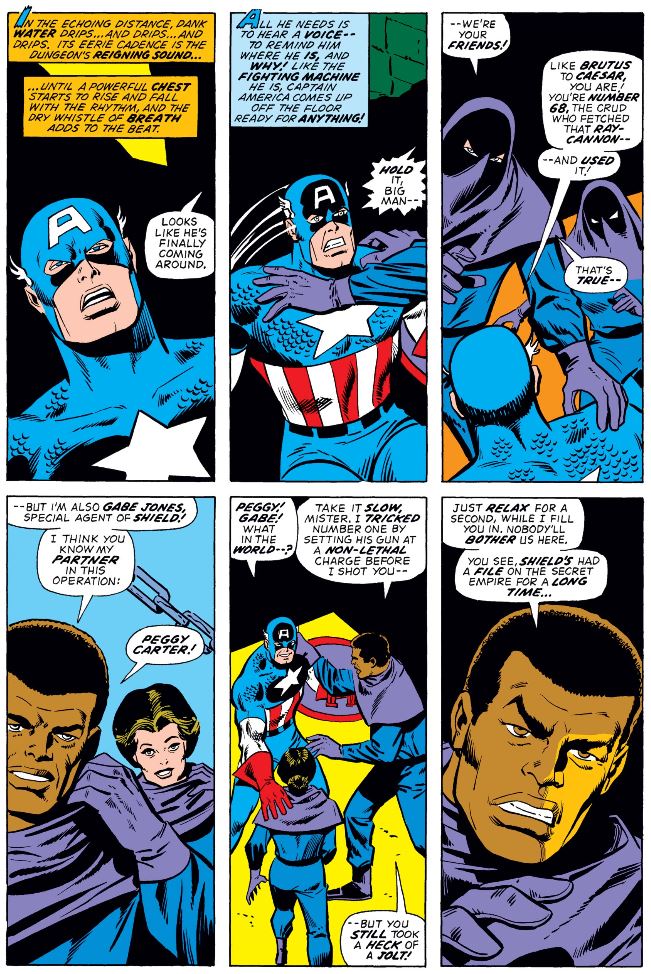 Well, that explains why the Atomic Annihilator didn’t exactly annihilate them.

After Gabe recaps other recent storylines about the Secret Empire, Cap is all caught up, and starts putting two and two together himself, especially regarding why Nick Fury was there to ambush Cap, Sam, and the X-Men in issue #173. 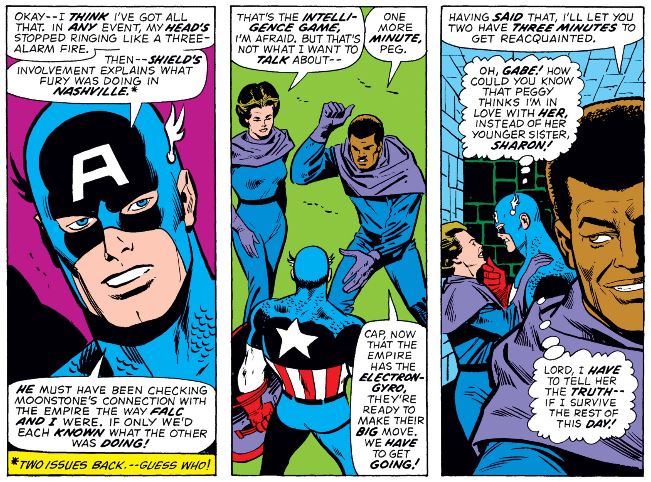 We also see the Carter drama reintroduced to our storyline… because the whole “destruction of faith in the American people” theme just wasn’t enough.

Meanwhile, in Washington, Harderman furthers his own plans, with Moonstone echoing another timeless line: 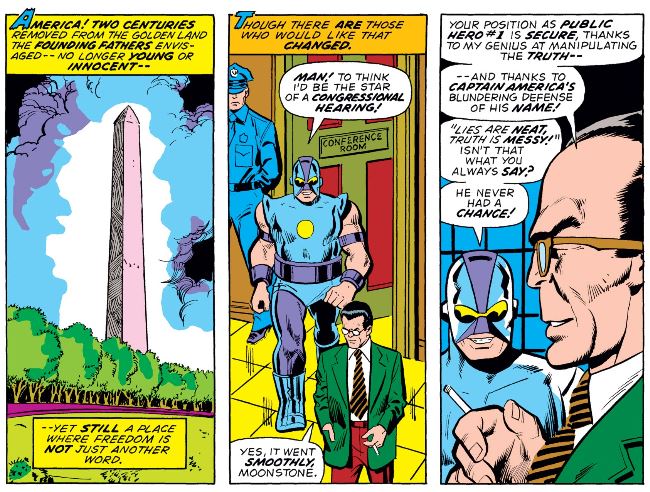 We like to think that “the truth will out,” but much like “good always triumphs,” it doesn’t just happen, but requires diligence from the righteous to push back against the forces of ignorance and injustice.

At this point, the Secret Empire’s plan really kicks up a notch, predating Close Encounters of the Third Kind by a few years. 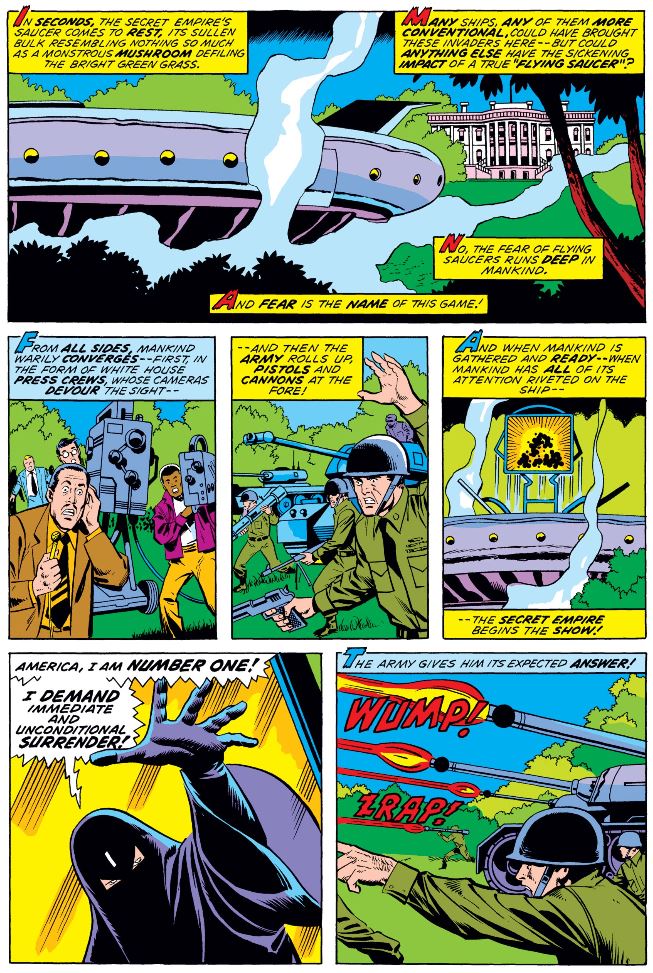 Again, subtlety is not one of the Secret Empire’s chief weapons.

Soon, Moonstone arrives, proclaiming that he alone will protect America from the invaders, and “fights” the armored Number Two, only to be beaten and taken in the ship, after which he returns to “admit defeat”… all part of the plan, natch.

Unbeknownst to Number One, all of our heroes are hidden in the ship, and they stand ready to emerge, with Cap affirming what they’re fighting for. (Odd choice of words, especially “retribution,” but we needn’t be too nitpicky.)

Below, as Cap finally strikes out against Number One, the narration again emphasizes his improving mood, as he is once again in his element and confronting his foe… and his other foe… rather than the less material villainy of rumors and negative press. 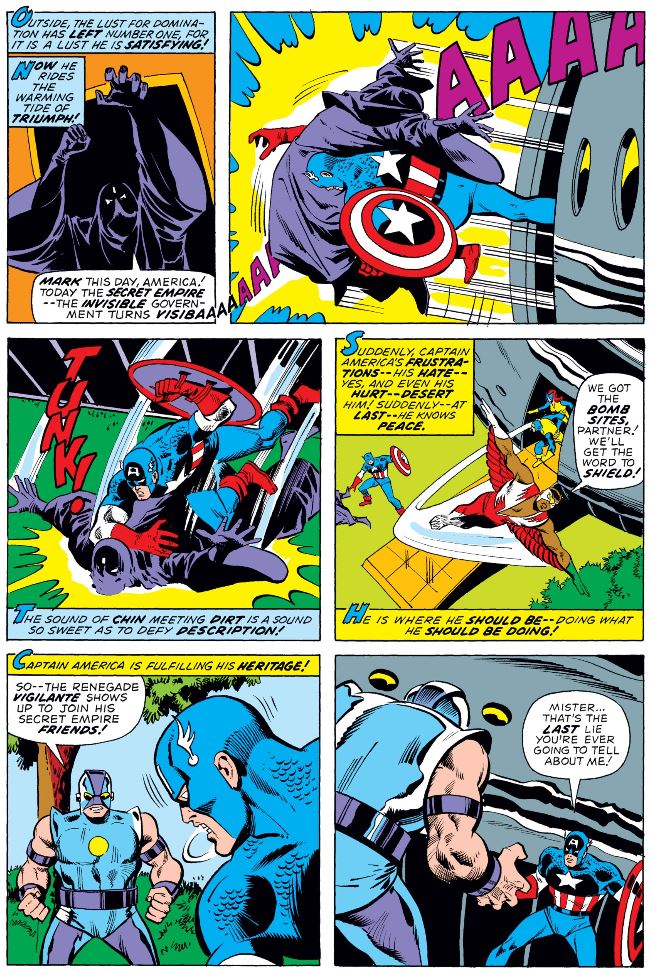 This continues below, with a description of Cap’s warrior spirit and total devotion to his cause. 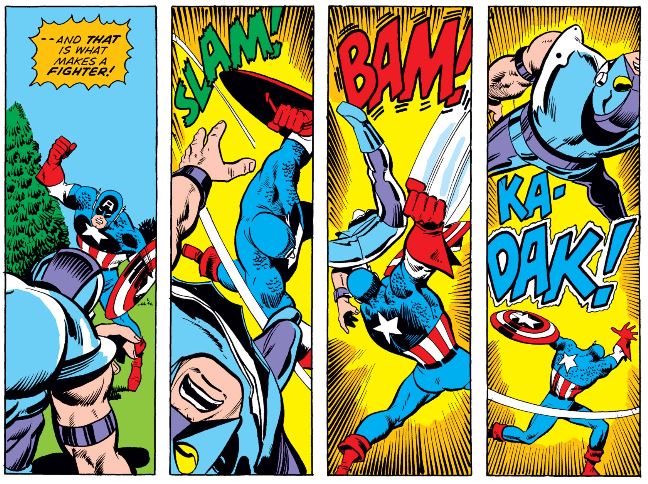 Harderman tries to pivot, but Moonstone spills like a drunk toddler carrying a pitcher full of lemonade…

…and Cap is quickly vindicated (very neatly, as acknowledged below), as he always seems to be, such as in Tales of Suspense #91, after being manipulated by Red Skull into proclaiming his allegiance to his archfoe, as well as the more recent “Secret Empire” storyline. 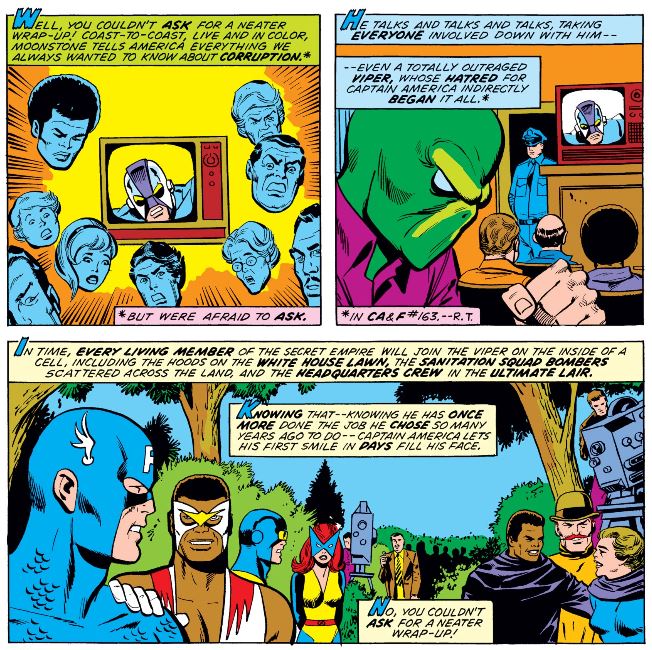 Whew! I guess that’s over, huh? Wait… what about Number One?

Yes, dear reader, Number One was meant to be none other than President Richard Nixon, which has been confirmed many times since by Steve Englehart. As he wrote on his website:

People often ask if Marvel hassled me for the political vibe in this series and others, and the honest answer is that they almost never did. It was a wonderful place to be creative. Here, I intended to say the President was Nixon, but wasn’t sure if Marvel would allow it and so censored myself – probably unnecessarily.

Regardless, we see some of the impact of this on Captain America below, echoing the disillusionment felt by many Americans in the aftermath of Watergate. I particularly appreciate, as the exposition makes clear, that Cap was not so naive to think America was perfect or flawless, but still believes it to be rooted in principles of justice and equality… foundations that have now been shaken, perhaps irreparably.

There is much more of this to come in the next issue, when Cap ponders his future, as well as in the rest of the “Nomad” storyline to follow.