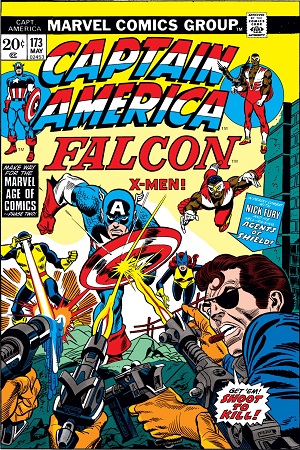 We have been covering the classic “Secret Empire” storyline since issue #169, and having established the main theme—Captain America struggling against an America turned against him by a coordinated media campaign and becoming an outlaw and fugitive from justice, no big deal—these two issues reveal the identity of his true foes, and introduces to our story the X-Men, who have been battling the same foes (hate is hate, it turns out).

You’ll remember from our last post that the villainous Moonstone defeated Cap and the Falcon—and luckily for our heroes, “Quent” stops him from ending them forever (and for good reason).

Quentin’s reasoning is sound, and acknowledges the limitations of even the most devious publicity campaign, but Moonstone’s is questionable: “People always want new thrills, but death is too oppressive”? Which “thrills”? Does he mean his faux heroics? If so, yes, killing your fallen foes might be seen as “oppressive” except for the most bloodthirsty.

But why am I wasting so much space on Moonstone? Especially considering he leaves Cap and Sam with the “Sanitation Squad”—the goons who broke Cap out of jail—whom our heroes easily evade, and then do the same to Moonstone, eventually returning to Harlem, where Cap threatens another masked hero’s claim to be the World’s Greatest Detective.

I really like how, in the first panel below, Cap tries to dissuade Sam from accompanying him to Nashville, citing the danger, and Sam dismisses it with a comment about outerwear. (He might have been insulted; we’ll never know.) 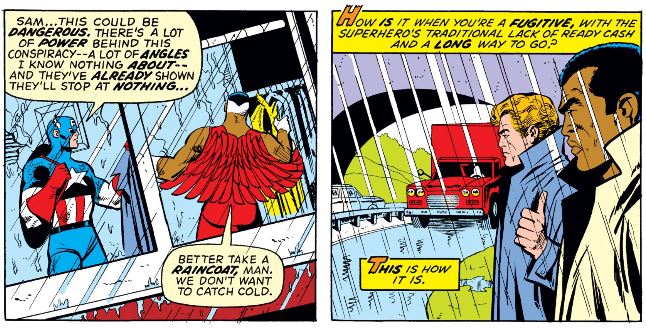 It’s difficult for us modern people, especially the young whippersnappers among you, to understand how common and acceptable hitchhiking used to be—but I don’t think the sight of Captain America and the Falcon doing it would ever not have been shocking!

Ironically, it seems Sam to the protective one here, considering Steve’s mental state and being careful to guard his secret from our Good Samaritan.

As it happens, the mutant (and sometimes X-Man) Banshee is also in Nashville, fleeing the forces hunting mutants (more on that soon), when he crosses paths with Cap and Sam, and they all fight for most of the rest of issue #172. Cyclops arrives just as Banshee seems to have won, and while he tries to convince Banshee that the X-Men only want to help him, the angry mutant flees, and Jean Grey (Marvel Girl) telekinetically brings Cap and Sam to an awaiting Professor Charles Xavier. And as so often happens in comics, thanks to clever writers, it turns out that our disparate bands of heroes are all fighting the same foe…

I wonder why Cap is so surprised—I always assumed that Nick’s contract stipulates that he has to appear in Cap’s book every few issues.

Of course, the question of why Nick and S.H.I.E.L.D. are here is still a valid one… and one the narrator is asking as well. 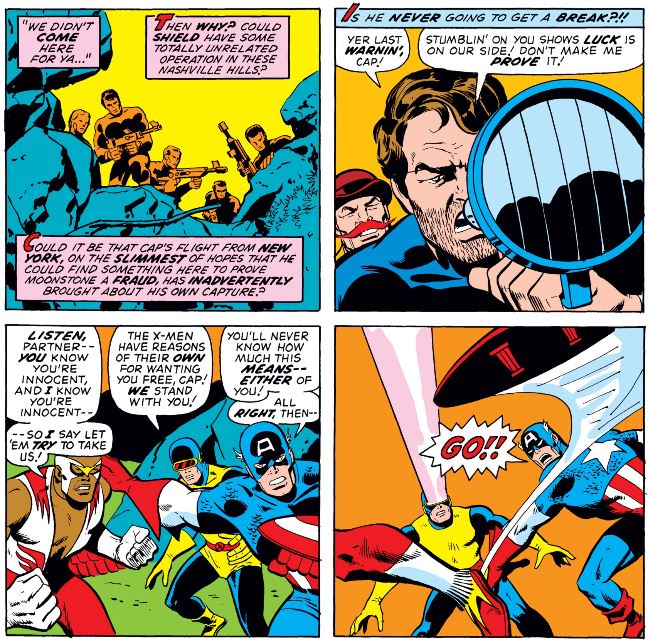 Cap’s outlaw status continues and extends to S.H.I.E.L.D.—and even more worrisome, he’s siding with Cyclops, which is never a good sign. (I mean, your buddy Tony is bad enough, but Cyclops? You do have an image to protect, Cap.)

Fans of Gail Simone’s epic Twitter trolling about Cyclops’ optic beams will undoubtedly get a kick out of the panels below.

Xavier sounds a lot like Cap above, recognizing that those whom they fight are only doing their jobs for reasons they believe righteous. (And Cap is, officially, an outlaw and fugitive.)

At least Nick confirms below what the Contessa Valentina Allegra de Fontaine told Cap in issue #169: that Nick turned against Cap (though it isn’t clear exactly why), and also that he’s a bit mixed up by everything, starting to buy into Harderman’s publicity campaign at the same time that he’s starting to piece everything together (and ultimately exonerating Cap).

Once they’ve escaped, Professor X explains how the X-Men have been tormented of late, and by whom… the Secret Empire, an offshoot of Hydra that has also fought S.H.I.E.L.D. (which, as we will learn later, is why Nick and the rest are there, which Nick is gradually figuring out, bless him). Note that even though this storyline has come to be known as “Secret Empire,” and I’ve been calling it that all along, the group itself wasn’t mentioned in it until this issue. 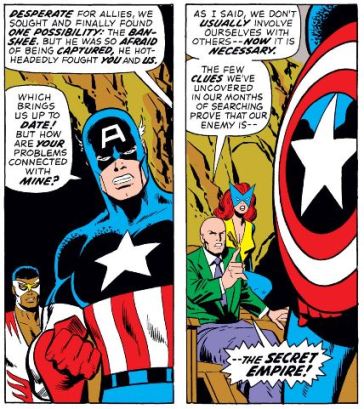 I don’t know if a man who just proclaimed that he doesn’t like to involve himself with others necessarily wants a friend, but Cap is determined to be his all the same!

Cap, Sam, and (dammit) Cyclops set up a ruse to infiltrate the Secret Empire, and it involves the first disguising themselves as vagrants with a heart of gold…

The woman Cyclops is pretending to attack is Linda Donaldson, a former girlfriend of the Beast, whom Xavier suspects is an agent of the Secret Empire. Once Cap and Sam chase Cyclops away (which is always a good plan), they make friends with Donaldson, and Sam gives him Cap’s very best fake name from issue #120: Roger Stevens. (It ain’t exactly “Matches” Malone, is it?) 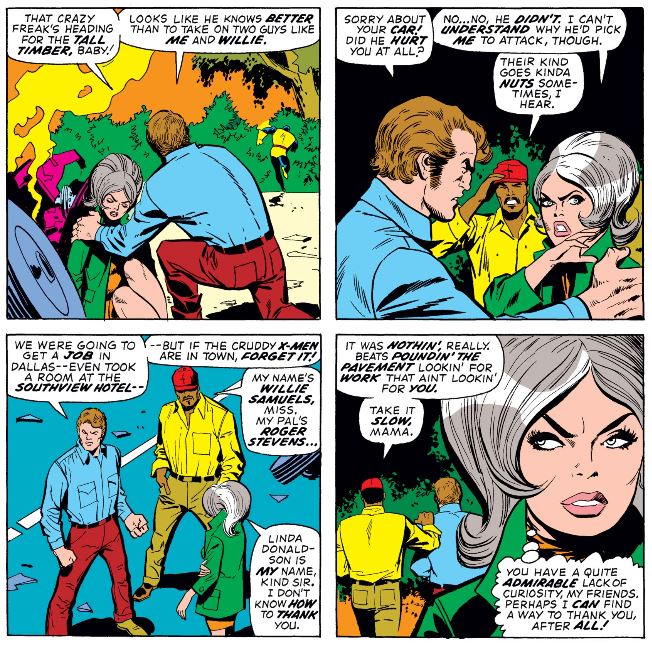 As we see below, Cap has never been comfortable with deception or subterfuge, even when he finds it necessary… and even more so when he’s not sure it is.

Cap needn’t have worries so much, for their plan worked, and it turns out the Secret Empire has no use for subterfuge… or subtlety, for that matter.

Cap and Sam get an audition—or, more precisely, an old-fashioned gang initiation—but Cap has had it with sneaking around in disguise. 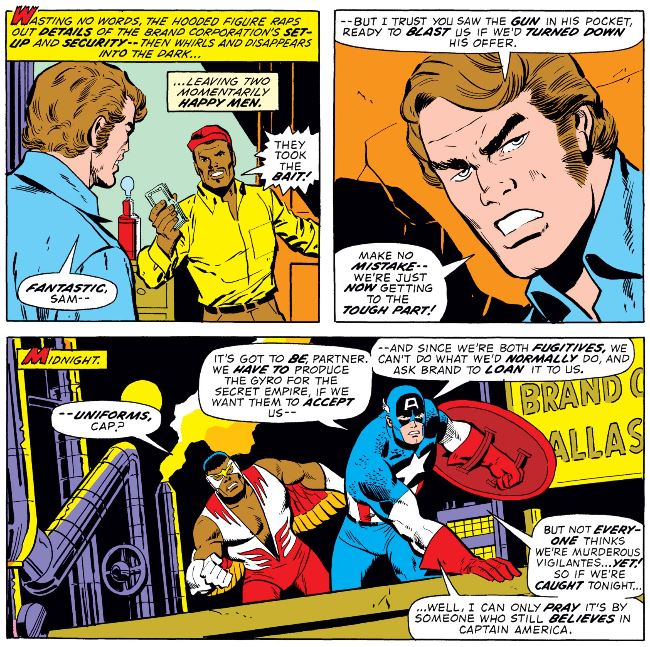 It seems Cap is a fan of risk: If they’re caught in uniform, the outcome can either be great (if their captors like them) or terrible (if they believe Harderman’s lies), while Rogers and Willie would just be treated as random thieves. (Strange logic, to me.)

Nonetheless, as the exposition below makes clear, they are now intentionally breaking the law, a fact which is lost on neither of our heroes, of course.

And to think, that guard might have had faith in Cap, until he saw him engaging in theft.

They escape with the thingamabob, both of them still burned up about what they did… but it seems Cap’s faith was merited after all.

Or was it? We’ll see in the next issue, after Cap and Sam give the electron-gyro to Number 13 and are granted entrance into the hidden headquarters of the Secret Empire (with the X-Men following closely behind).

Be sure to read the next post, as the “Secret Empire” races toward its epic conclusion!