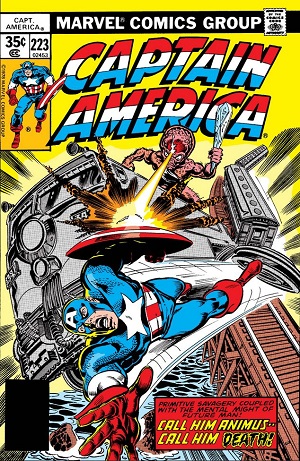 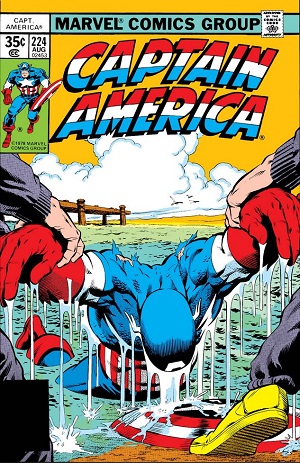 These two issues of Captain America are oddly related: Only the first continues the current “Who Is Steve Rogers?” storyline, while the second is a fill-in which also deals with confused identity (which must have been even more confusing for readers at the time). On the bright side, the fill-in also features the first cover and interiors by one of my favorite Captain America artists, Mike Zeck. Finally, this post is rounded off by Cap making an appearance—however brief—in an issue of Marvel Team-Up featuring his old pal the Falcon.

Captain America #223 picks up where it predecessor left off: With Cap fighting a strange creature bearing the name Animus but apparently bearing none toward Cap. (Just wait, it gets stranger.) 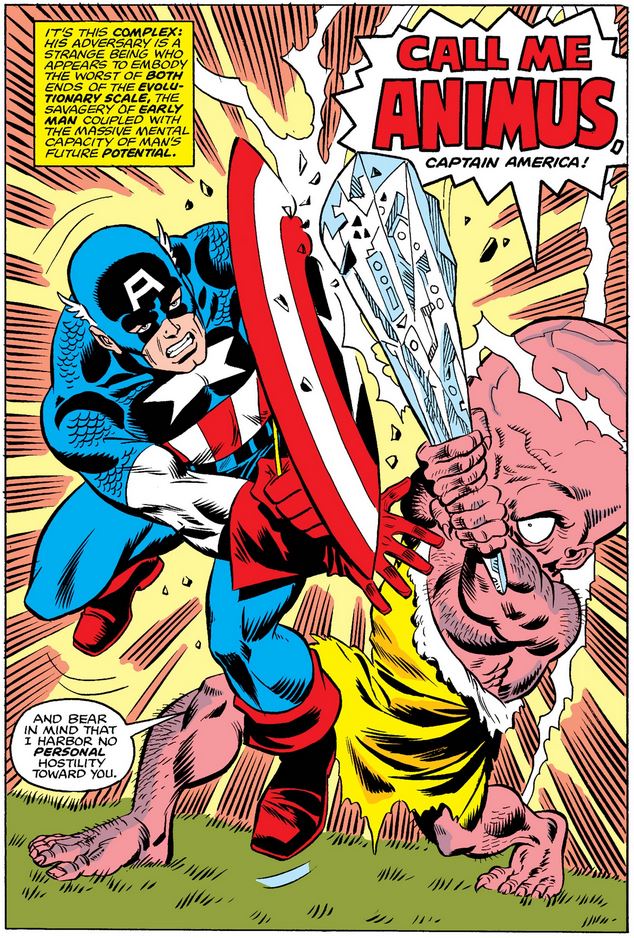 The exposition above is strange, implying that modern humankind’s cognitive capacity is “the worst” thing about our current stage of evolution. (Of course, 1978 was the height of disco, so…)

Below, Animus defends himself based on the preservation of his own life, despite his own moral disgust for the situation in which he finds himself. 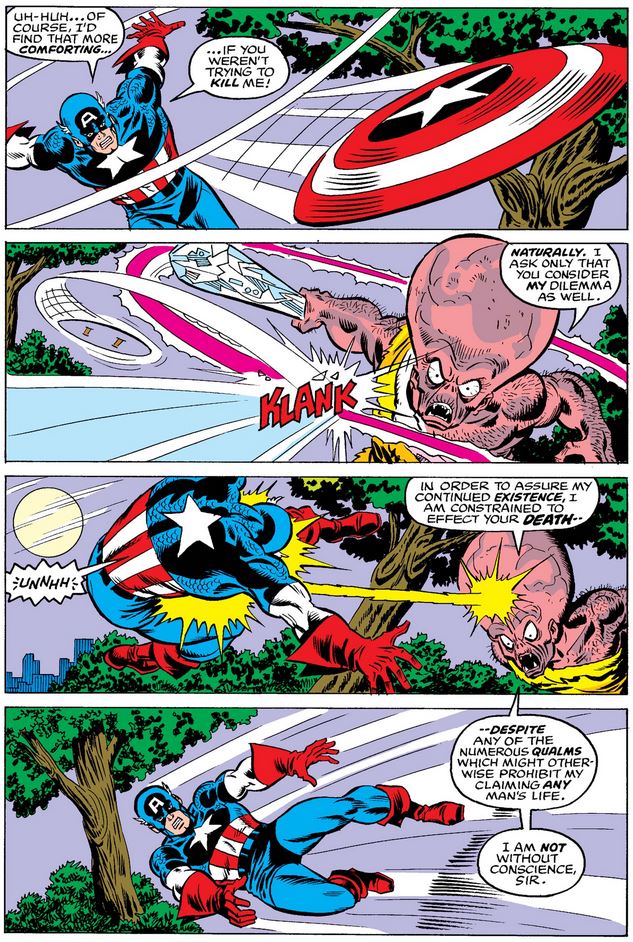 Cap is wise enough to realize that, in defending himself, he is using the same logic as Animus (albeit in defense rather than offense), and shares his “qualms.” 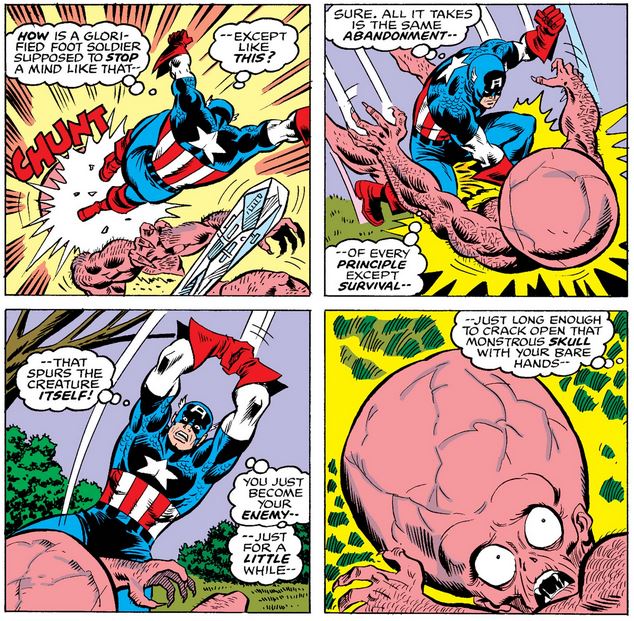 As he strikes what should have been the killing blow, Cap realizes that his remorse is a welcome signal of his humanity…

…before he realizes that Animus vanished into thin air before his blow landed, allowing Cap to return his malaise over his missing memories of his life before Project Rebirth (the underlying if intermittent storyline since issue #215). 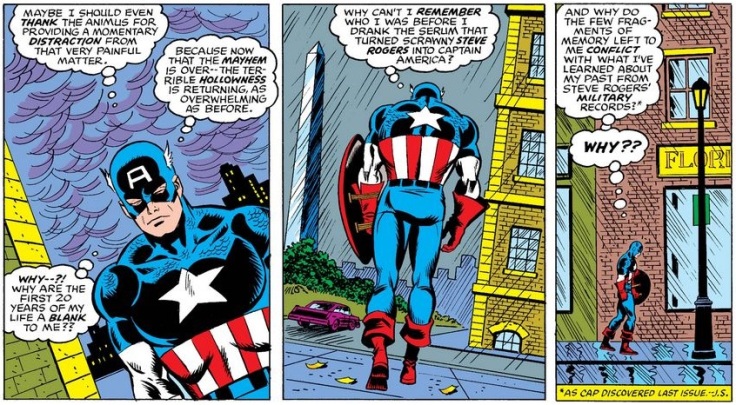 His preoccupation with his mysterious past, as well as the more pressing problems with Animus and the Corporation, who have both tried to kill him, nearly gets him killed on his own. Of course, he is unfailingly polite to the irate cabbie, and learns a lesson from the experience. 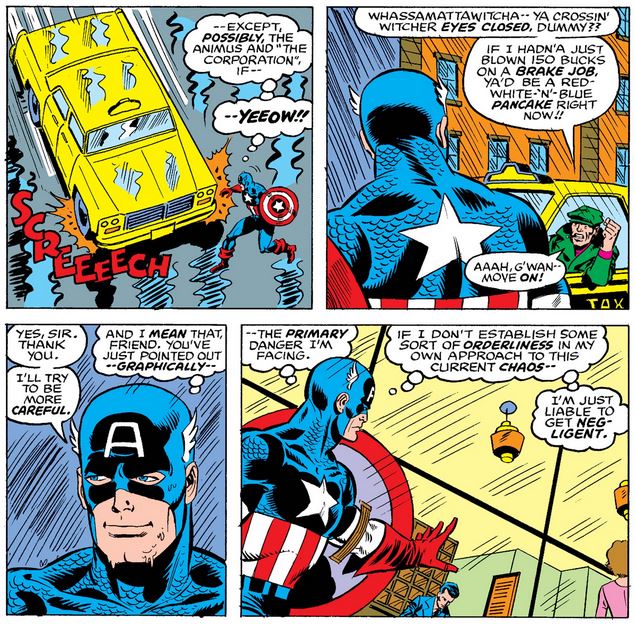 Cap returns to his apartment, only to have a V8 moment. Luckily or not, his mysterious friend Veda is there to lend a hand, even though he is still unaware that she works for the Corporation. 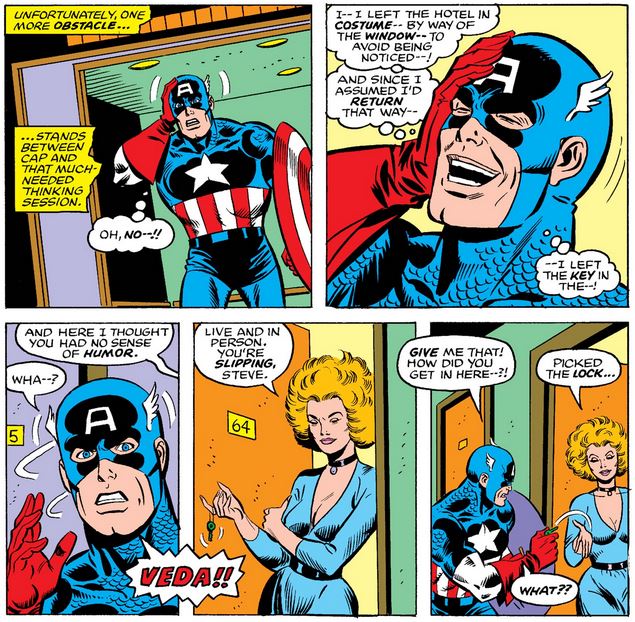 Yeah, nothing to be suspicious about there, Cap.

After he claims exhaustion to make Veda leave, Cap discovers tracers on his shield and calls Nick Fury to chew him out for it (the “small victory” referenced below). (We won’t be seeing any more of Veda: Her Corporation “ally” Kligger, fearing her affections for Cap as well as their rivalry in the organization, kills her in issue #225.) And then Cap has a strange dream, hinting not only toward his “true past” but the nature of the creature Animus as well. 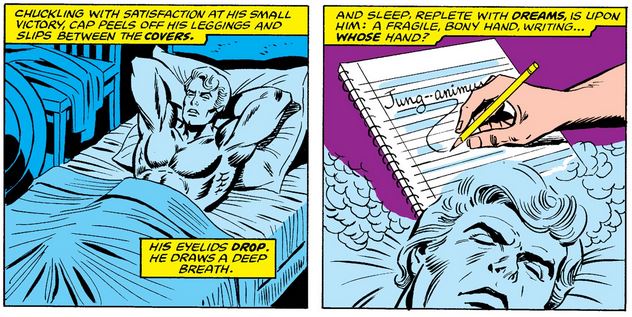 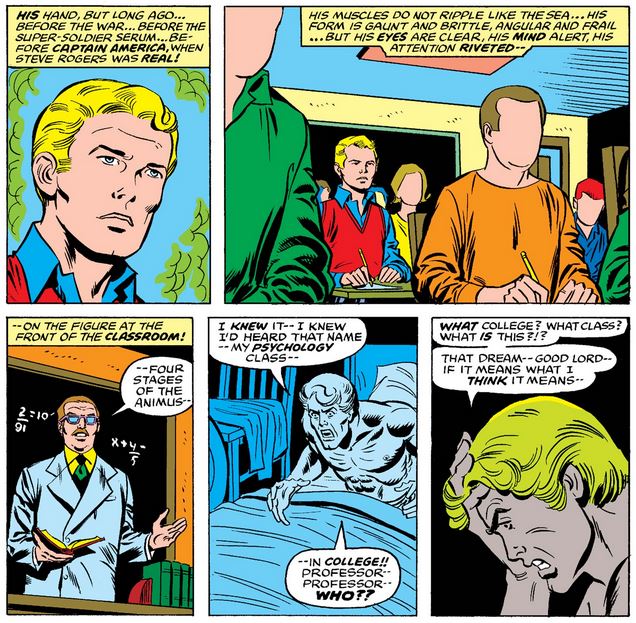 I don’t know why his psychology professor was lecturing in front of a chalkboard with basic algebra on it—unless the previous professor neglected to wipe the board before they left, which is an evil the likes of which Cap has never faced— Don’t get me started, people!

As it happens, in Jungian psychology, animus is the unconscious male aspect of a woman (while anima is the unconscious female aspect of a man), as he described in Psychology of the Unconscious. In fact, as the professor in Steve’s dream said, Jung did think of the animus as having four stages—man of physical power, man of romance, man as professor, and man as spiritual guide—although our Animus seems to be stuck at the first stage, assuming there’s any connection at all.

As Cap travels by train to find someone to help him probe his brain for answers, who should attack the train but Animus, and Cap becomes enraged thinking of all the other passengers endangered because of the creature’s quest for him. 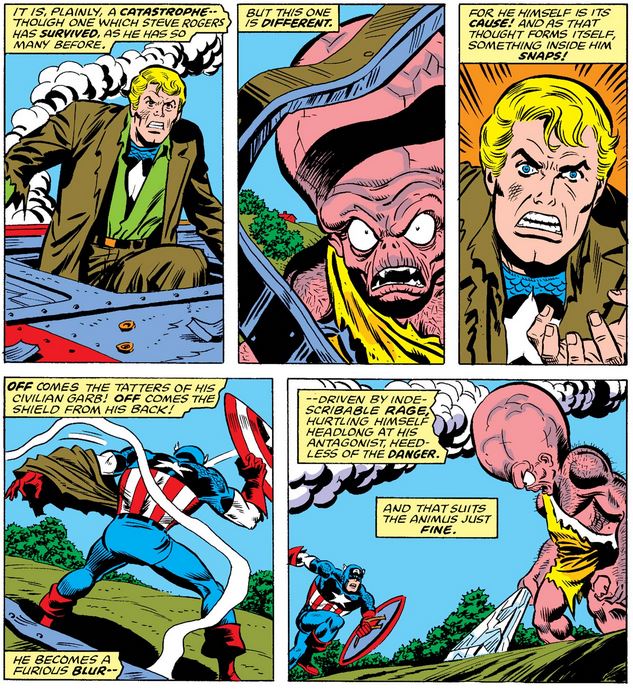 I suppose we can excuse Cap’s anger due to his precarious mental state, but I cannot and will not excuse the ludicrous fiction that he can hide his shield under his jacket.

Cap’s rage does not subside as he attacks Animus… 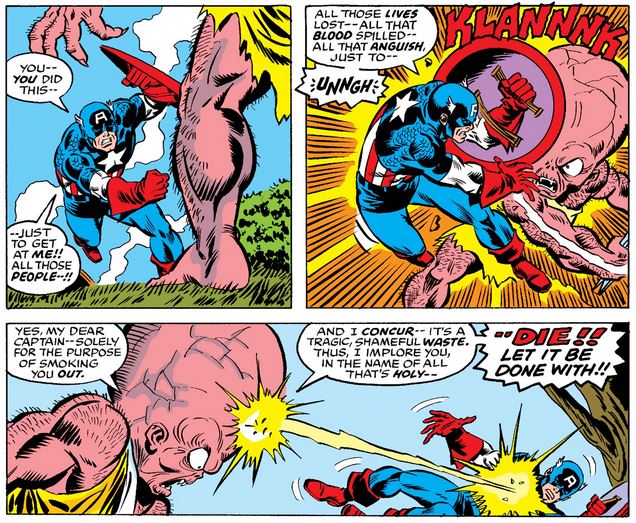 …and whether because of it or despite it, he does get the upper hand, only for the creature to disappear again. We do, however, learn an additional detail that lends some import to the Jungian interpretation of “his” name (and also connects Animus with the Corporation through mention of Kligger). 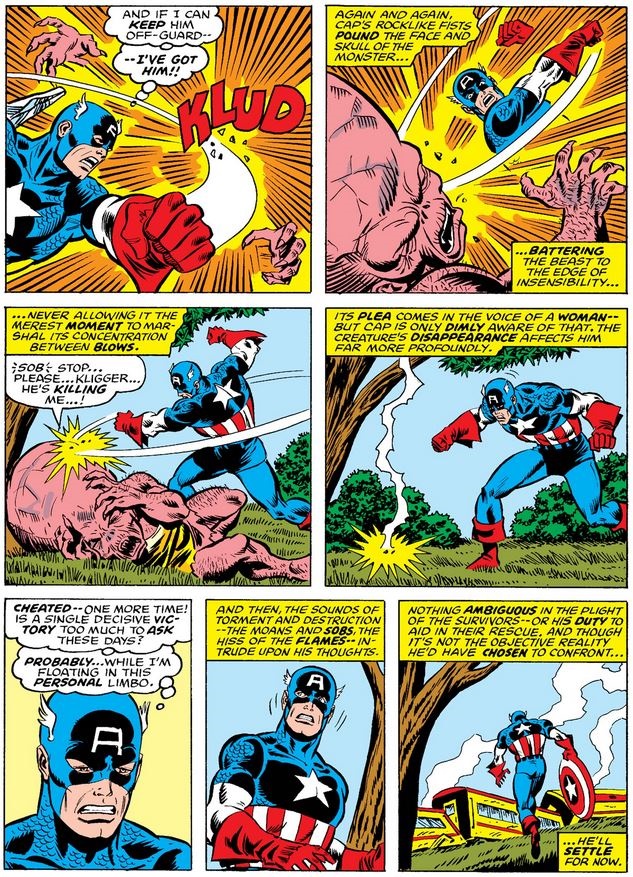 For his own good, likely, Cap’s rumination is interrupted by calls for help that trigger his duty… even if, as the exposition says, he’d rather be thinking of other things.

Cap will learn more of his supposed past life in Captain America #225, but this forward progress in the “Who Is Steve Rogers?” storyline is set aside for a fill-in issue that, as fill-ins go, is relatively interesting, starting with an homage, intentional or not, to the Avengers’ discovery of Cap in the similarly freezing waters in Avengers #4. 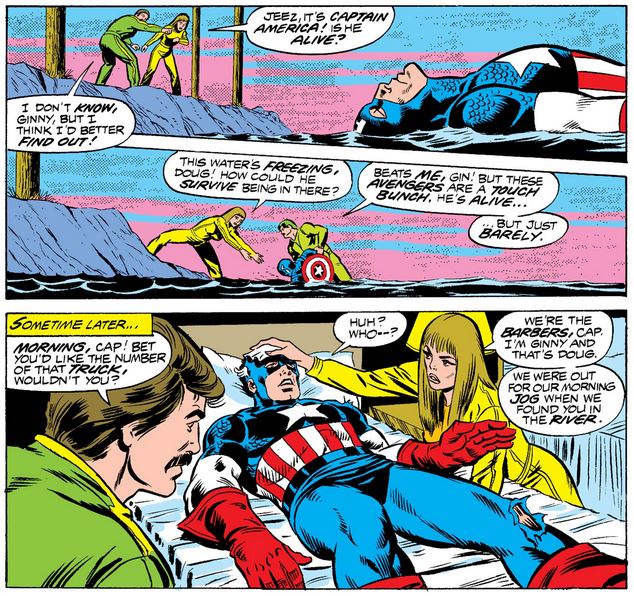 When Cap gets up and looks in the mirror, though, he sees not Steve Rogers—whoever he might be—but rather a guy who looks like a bat flew in his window or something. 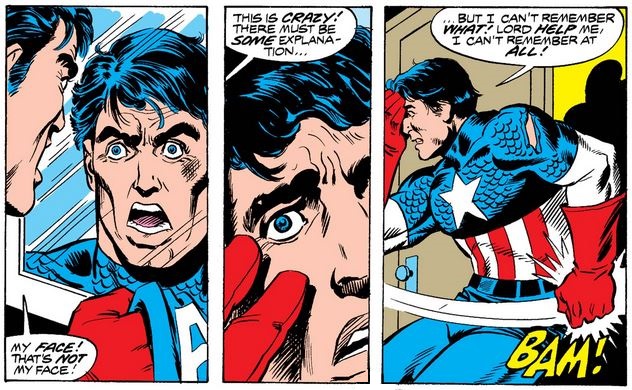 He heads to Avengers Mansion to find Alfred… I mean, Jarvis… and any Avengers that can help him…

…and Iron Man discovers that Cap’s “new face” is synthetic skin, which leads Cap to investigate and discover a covert mission for which he had to wear a disguise, and then was captured, poisoned, and left for dead in the water, with no memory of any of it.

The red-bordered panels below are Cap’s recovered memories of the battle, including a fight with Tarantula (a two-bit Spider-Man villain). 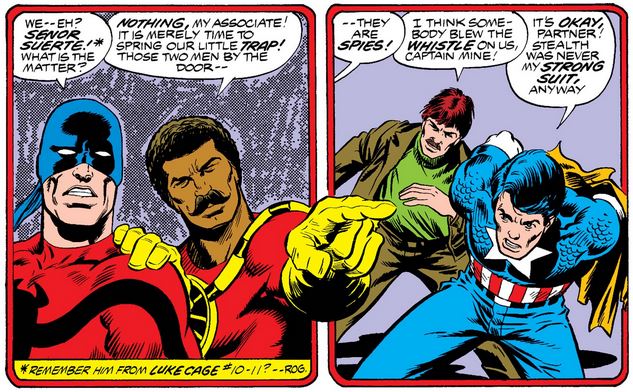 I think Cap is giving Tarantula too much credit below (“enemy of humanity”), but whatever. 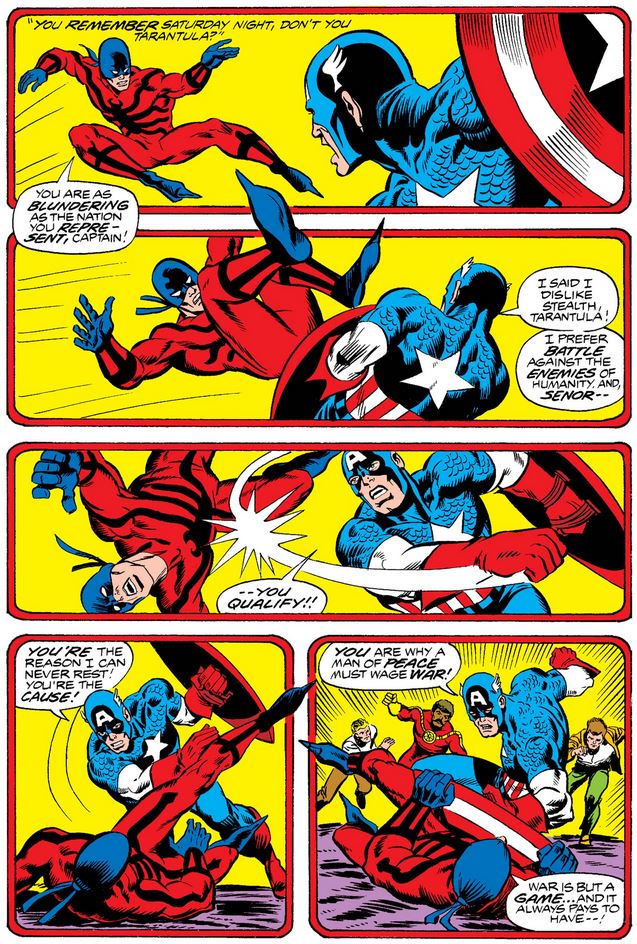 If Tarantula is enough of a threat to make a man of peace feel he has to wage war, that bar seems set awfully low!

And if that wasn’t melodramatic enough, wait until he find Tarantula again! 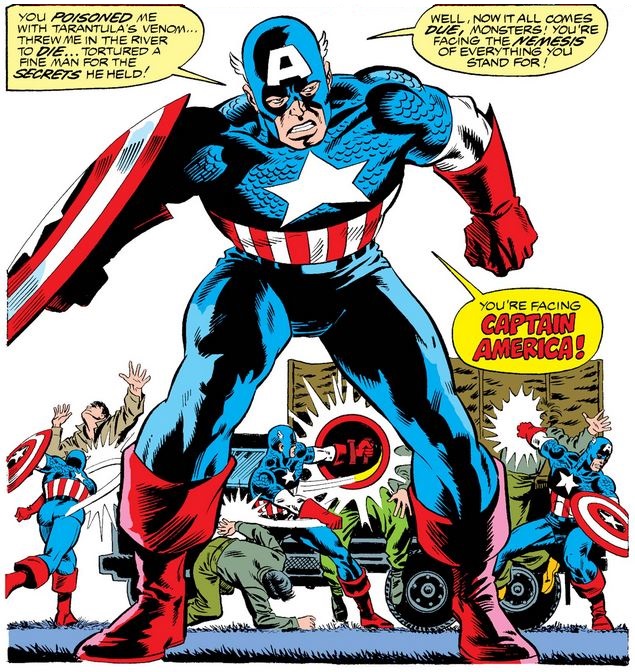 And one wonders if Cap still has some of his temporary super-strength left, given the last panel below. 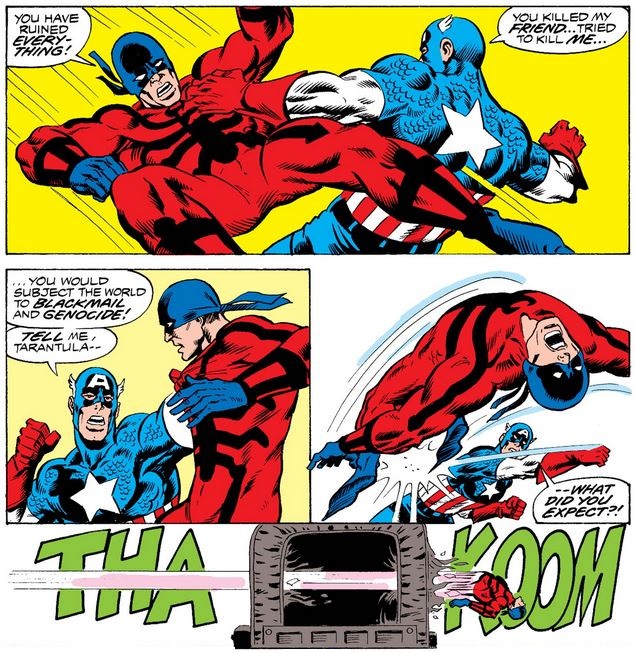 And with that., we’re back on track with the mystery of “Who Is Steve Rogers?” in the next issue and post, when we get the full (but false) story behind Steve’s life leading up to Project Rebirth.

Finally, over in Marvel Team-Up #71, Cap starts the story unconscious… 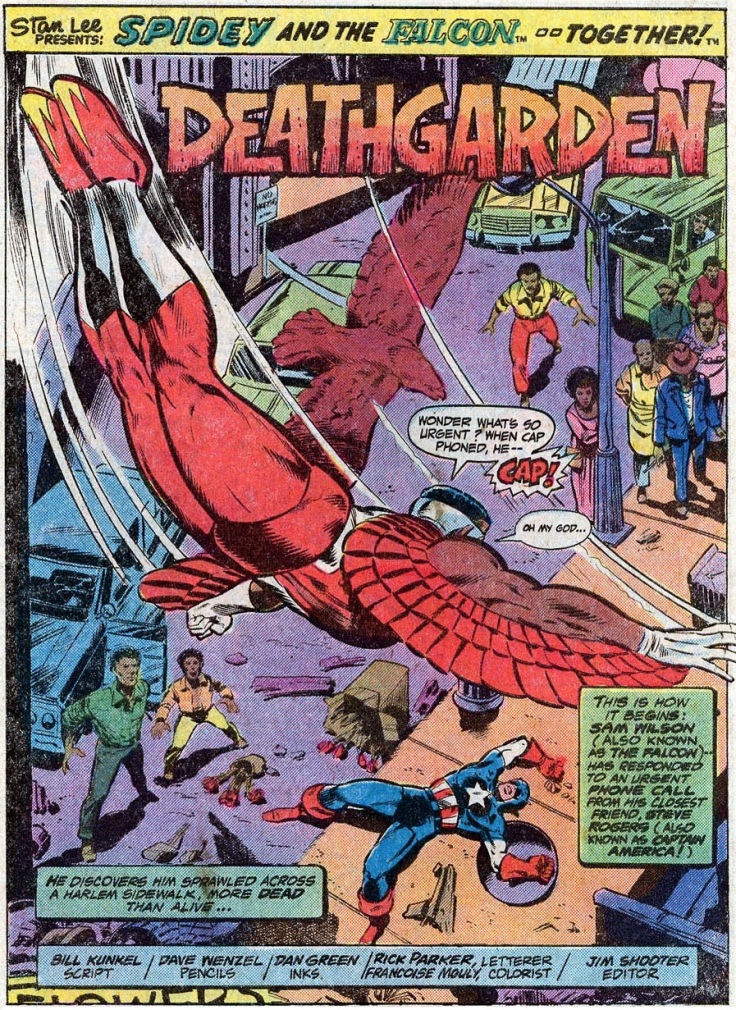 …floored, or flora-ed, by his greatest foe! 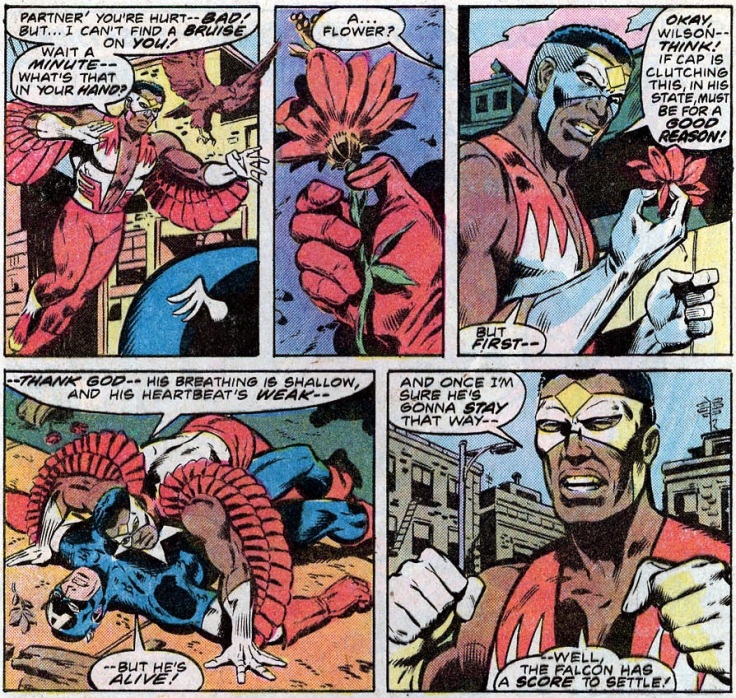 Get that flower, Sam… but watch out for its pistil!

After Sam gets Cap to the hospital and is joined by Nick Fury, we meet the only doctor with less tact than Nick himself. 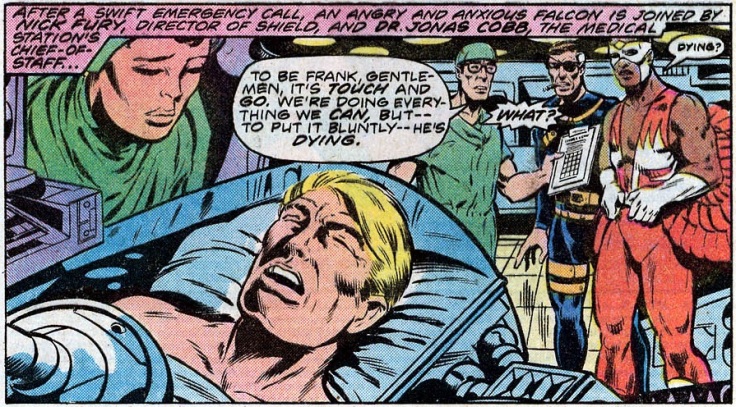 You thought I was kidding about the flower? 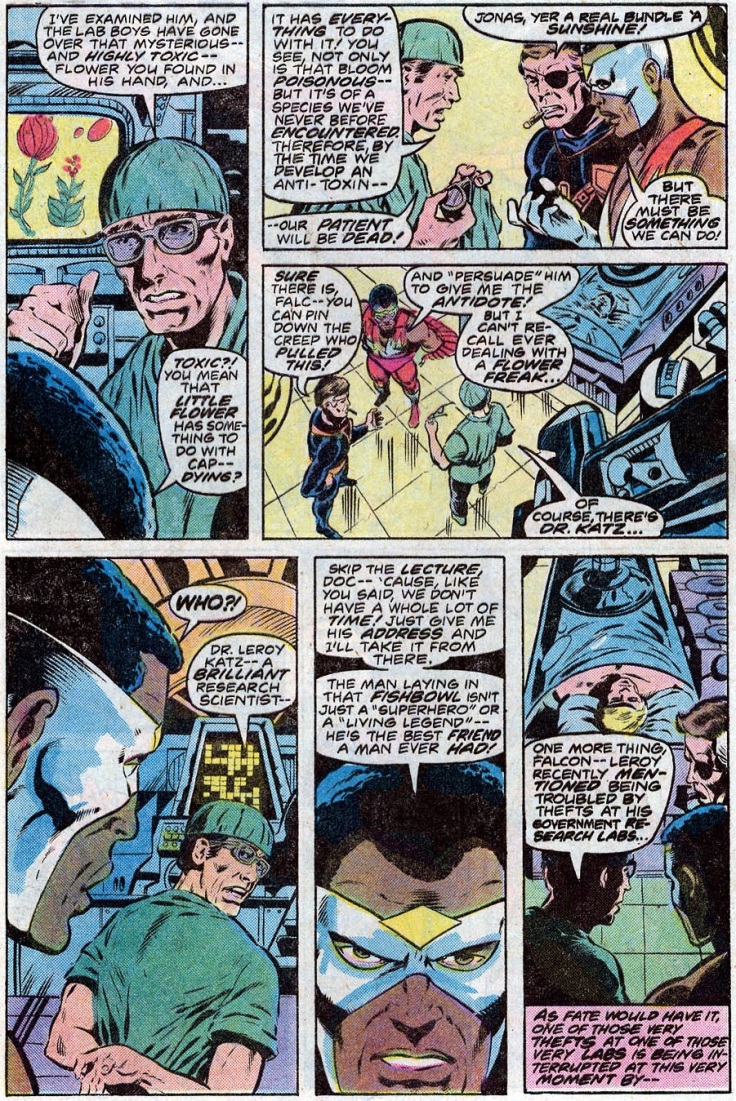 Sam affirms his friendship with Cap before he leaves to find Katz, in the process meeting, fighting, and then joining with Spider-Man to find the villain behind the flower—or, should I say, at the root of the problem. They get the antidote and use it to revive Cap, who, judging from the huge smile on his face, obviously got a huge kick out of my root joke, and also finds time to express his gratitude to his friend and (sometimes) partner.

Also not yet collected in color (or available digitally), but is collected in black-and-white in Essential Marvel Team-Up Volume 3.