In this issue, we finally learn the secrets of what is supposed to have been Steve Rogers’s life before he underwent Project Rebirth, which we later learn are false details, explained away in issue #247 and replaced in issue #255 by the now-familiar ones.

This issue starts with the aftermath from the last, a horrific train crash caused by Animus, a creature working for the Corporation, an organization determined to end Captain America’s life and perfectly willing to harm or kill innocent civilians to do so. 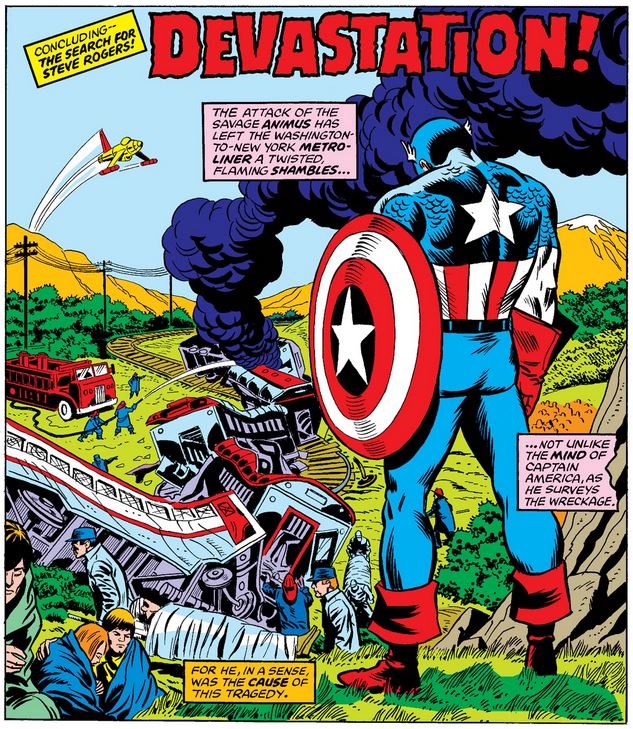 Always the considerate gentleman, Nick Fury sticks his nose where it doesn’t belong, and Cap does his best to be polite… but it is Nick, after all.

To be fair, Fury does suggest a way for Cap to access his lost memories, one that involves Mason Harding, the inventor of the Madbomb from the storyline that started in issue #193 (the beginning of Jack Kirby’s 1970s run). We saw in issue #201 that Cap was sympathetic to the situation that led Harding to work with the Elite against his country, and we see below that he still maintains an attitude of compassion toward him. 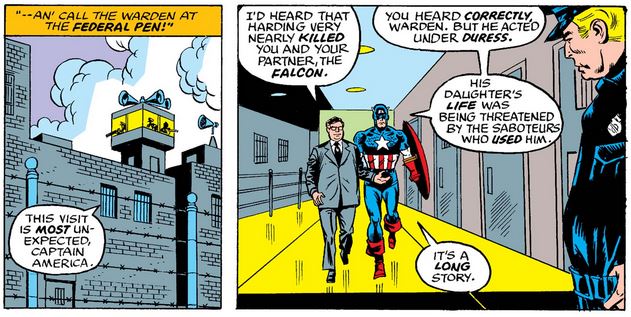 Cap explains his predicament to Harding… 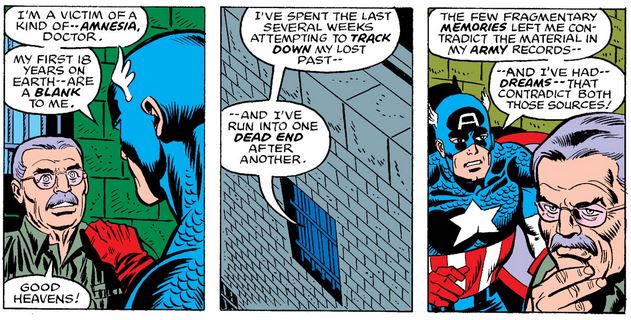 …and Harding suggests hypnosis, which doesn’t work due to Cap’s training to resist it. (There is no clue whether this training was from the military or S.H.I.E.L.D.)

Cap truly seems at his wit’s end, but Harding has another idea, one that leads Cap to arrange for his temporary release to work at his lab, supervised by one Nicholas Fury. Once Harding activates his device, we enter Cap’s “memories” (for what they’re worth), which build on what Cap learned in issue #222. 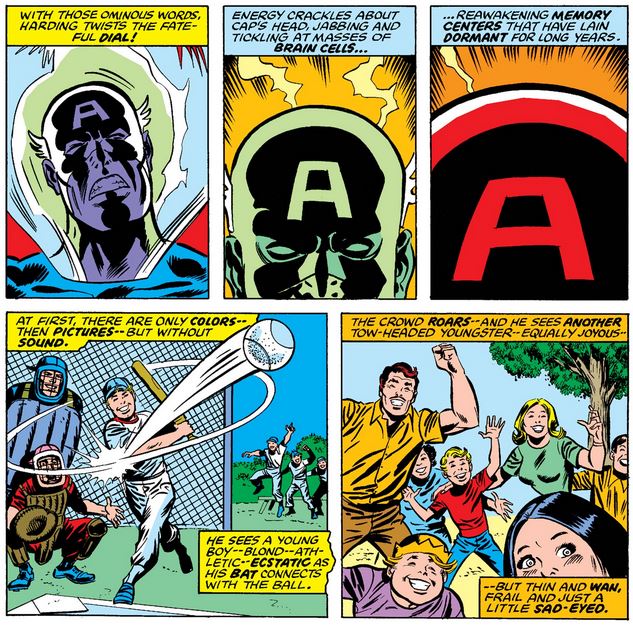 Can you guess which child is Steve?

Below, we get our first glimpse at his father Walter’s attitude toward him compared to his brother, as well as the first sign of Steve’s artistic talents (which, unlike most of these memories, is accurate, as we see in issue #237 and going forward).

Maybe if Steve cut down on the Cubism, his father Walter would appreciate his art more. (No, probably not.)

His dad tosses the ball to Steve, who catches it with his head, triggering the reactions we now expect and confirming Steve’s devotion to art and academics instead of athletics, which is consistent with his traditional portrayal as frail and sickly. (I never said there was no rationale behind this new history, just that it didn’t last long as canon.)

We do see hints of a temper in Steve’s father and sympathy in his mother, which is retained in his eventual, more permanent backstory. 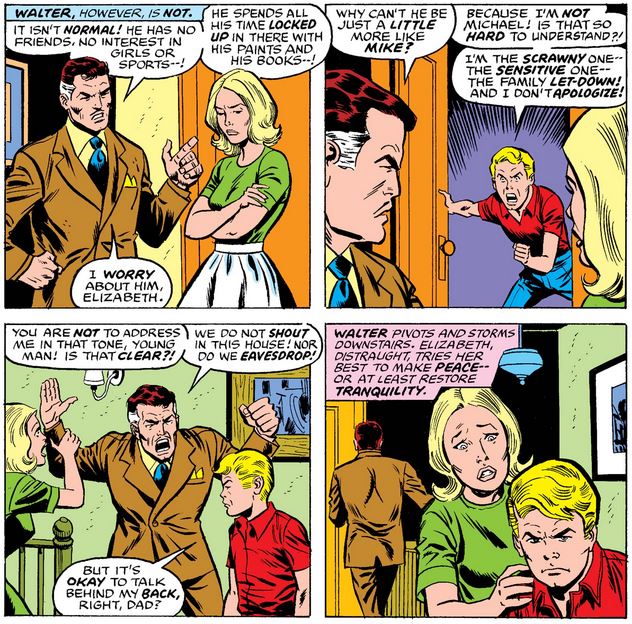 Later, when his brother Mike returns from the Navy Academy, we see Steve’s traditional distaste for battle and war, exaggerated here to full-blown pacifism (perhaps, to some extent, just in resistance to his father).

Steve leaves for college at Empire State University, the school Peter Parker and his friends would eventually attend, located in upper Manhattan, although Steve prefers to spend his time in Greenwich Village towards the lower end of the island—at least until December 7, 1941…

…when we finds himself confronting the often irreconcilable moral dilemma of confronting evil while maintaining one’s principles. His decision leads him to the enlistment center where the familiar story begins of being rejected as 4F before invited into Project Rebirth, which he happily accepts now to avenge the death of his brother as well as to defend his principles.

But at what cost does Cap rediscover his last memories? 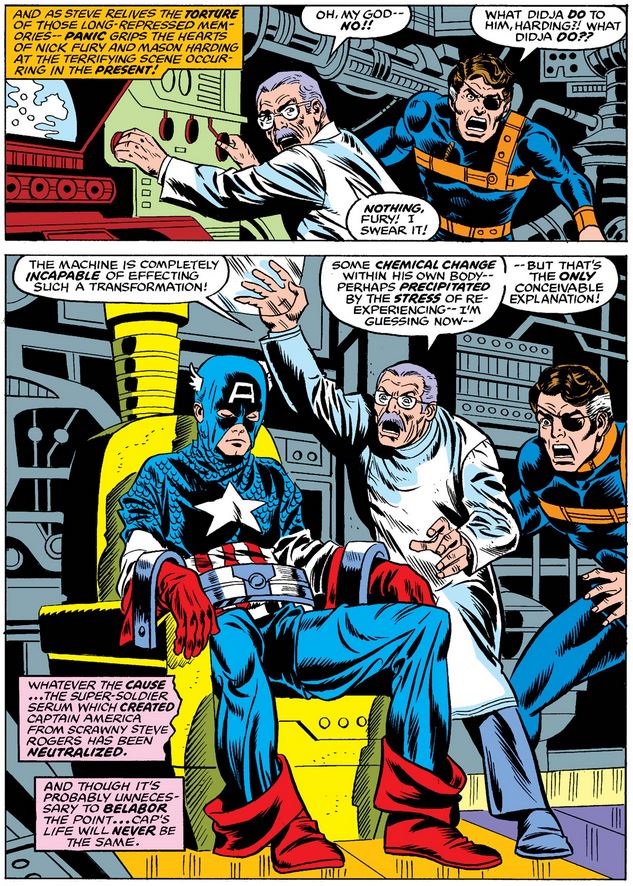 Cap may look like a child above, but he has actually been reduced to his original scrawny form, the ramifications of which, as well as the return of one of his archfoes, we will see in the next two issues (covered in the next post).