KIRBY IS BACK! As America’s bicentennial year opens, we see Captain America co-creator return to his title as writer, penciller, and editor, where he’ll remain for almost two years, from issue #193 to #214 in October 1977, plus two annuals and a special “Bicentennial Battles” issue. Kirby injects a science-fiction feel to his run, where fantastical concepts and high drama take precedence over ethical displays or moral dilemmas, so I’ll cover much of this run in batches.

The two issues in this post begin an eight-part storyline dealing with a conspiracy to overthrow America from within, using a hysteria-inducing device called a Madbomb, and touching on some concepts related to artificial intelligence and “deep fakes” that will seem all too familiar to current readers.

After a symbolic opening splash, issue #193 opens with a slice of life, with Cap and Sam’s friendly competition interrupted by a strange mind-control beam… and as they say, things escalate quickly.

While Cap and Sam find the inner strength to resist the beams, one finds Leila, and Cap characteristically shows more concern for her safety than for his or Sam’s.

After Sam subdues Leila, Cap goes outside to find an out-of-control crowd, and struggles to maintain his own composure while finding it impossible to stand up to the crazed masses.

As he continues to resist the mental control, he finds its likely source. 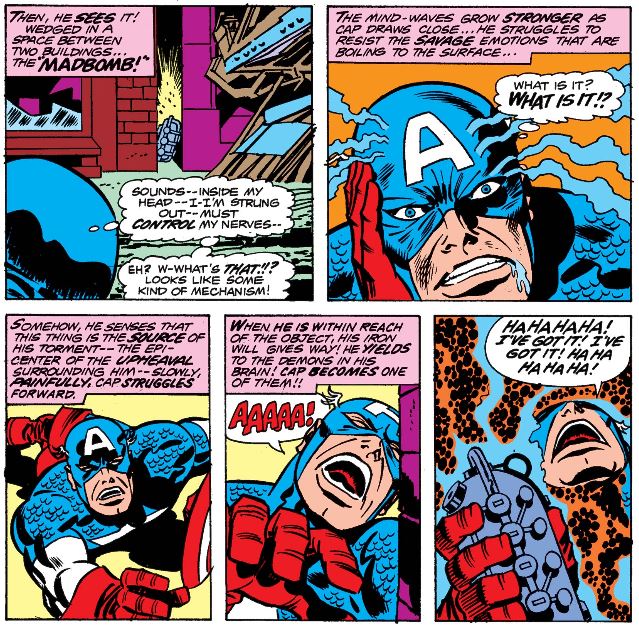 Even though he succumbs to the Madbomb’s power in such close proximity, ironically its effects lead him to destroy it (just as the wannabe Thor behind him wields his mighty hammer over Cap’s head). 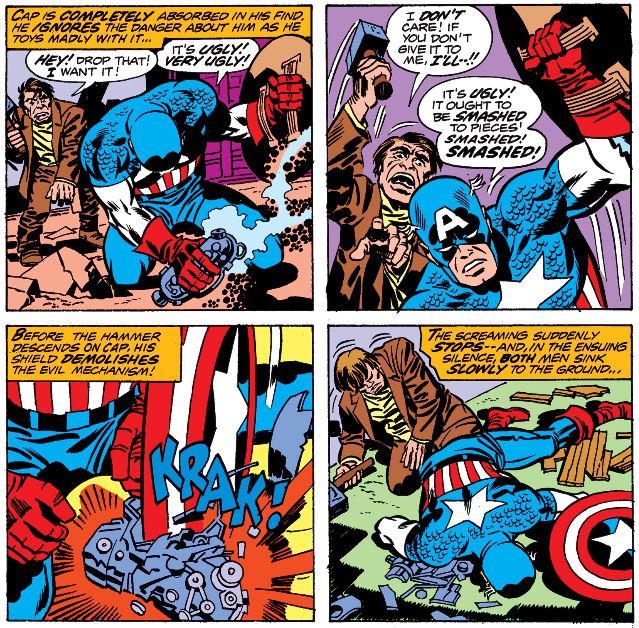 Cap rises to survey the ruins of the city, and sees a woman in need… and a heroic partner arriving just in time, whom Cap appreciates (even if Sam humbly deflects his praise).

Soon, a S.H.I.E.L.D. agent arrives and tells our heroes about the Madbomb, and takes them in a government installation where they face a number of deadly traps, including one that readers at the time would soon see in the theaters (from a galaxy far far away). 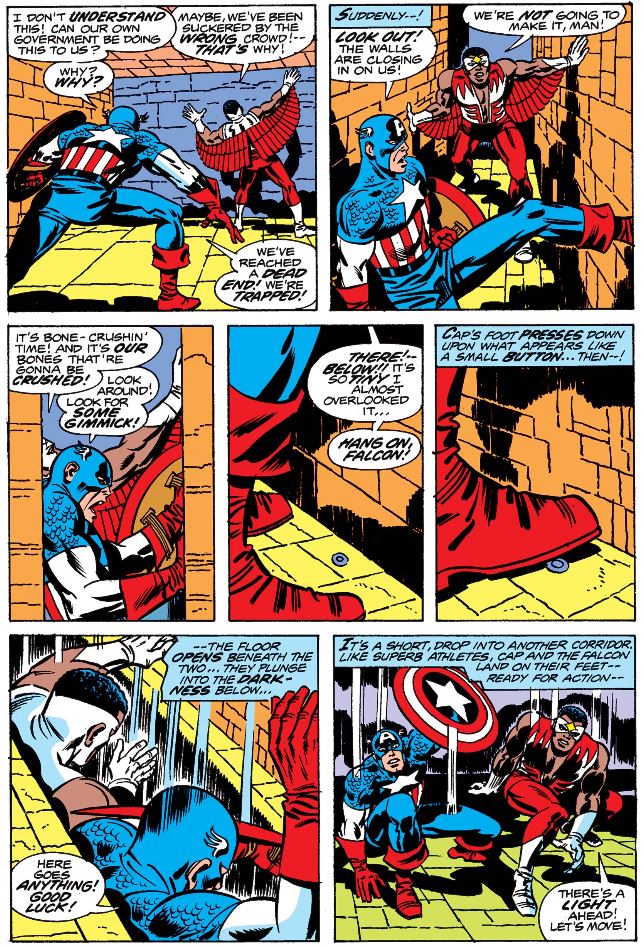 Yes, that is Henry Kissinger. (Comics!) After Cap and Sam pass his tests, Kissinger tells them about the various Madbombs, ranging in size from tiny, to the larger one Cap destroyed in New York, to the one our heroes are looking at a picture of below.

I like to think Cap and Falcon would be fighting the scourge of Adam Sandler movies, but unfortunately that’s not where this story is going.

In issue #194, we get this amazing two-page spread from Kirby, showing Cap daydreaming about the current danger.

We also meet the conspirators behind the Madbomb, led by William Taurey, who plans to overthrow democracy and restore the elite to power… or, umm, more power, I guess. 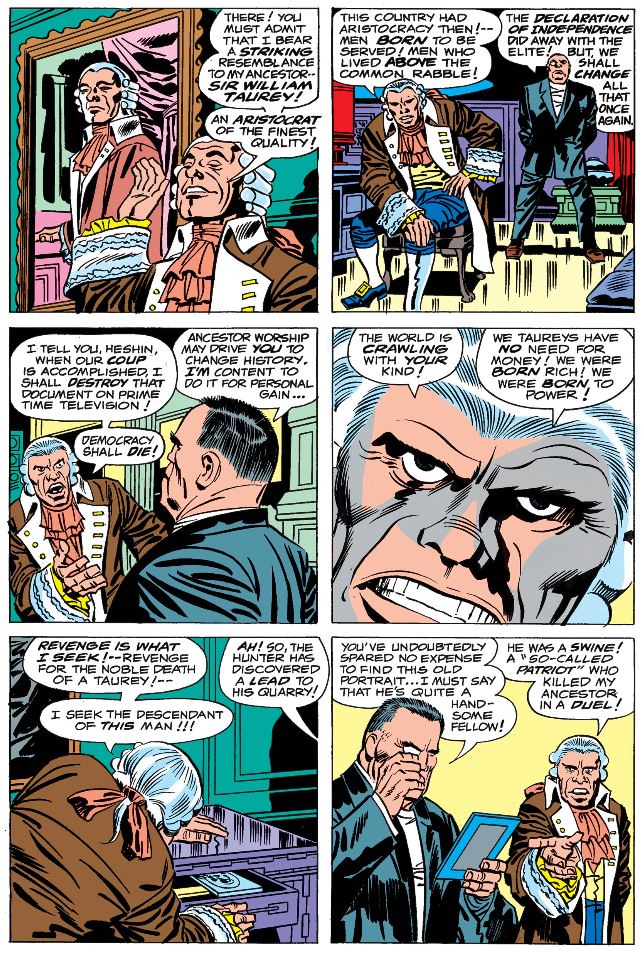 And he even has a link to Cap… 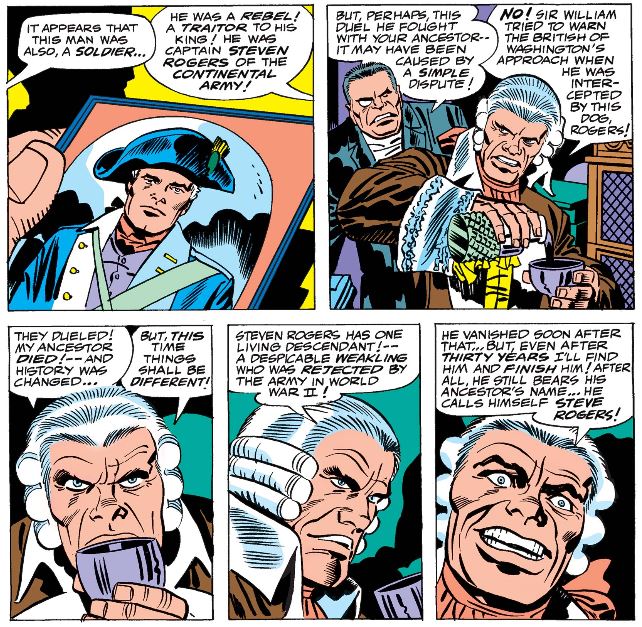 Strangely enough, Cap is thinking about his ancestor too, but Sam interrupts his revelry with some cold hard supposition. 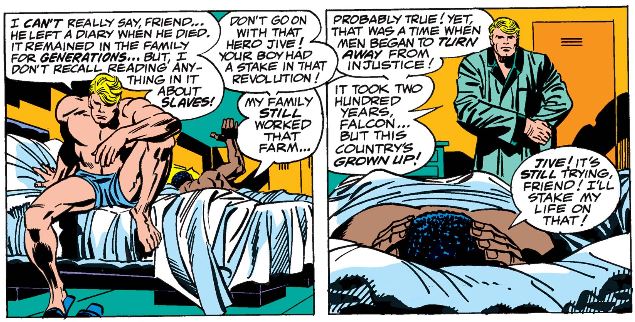 And still trying, even over forty years later.

Out of costume, Cap and Sam manage to infiltrate the “Royalist Forces of America,” but are caught and imprisoned with experimental subjects transformed into mindless beasts—the fate awaiting our heroes as well.

Once Cap and Sam put two and two together, they launch into action, while Cap expresses sympathy for the creatures—especially after he and Sam realize who some of them are. 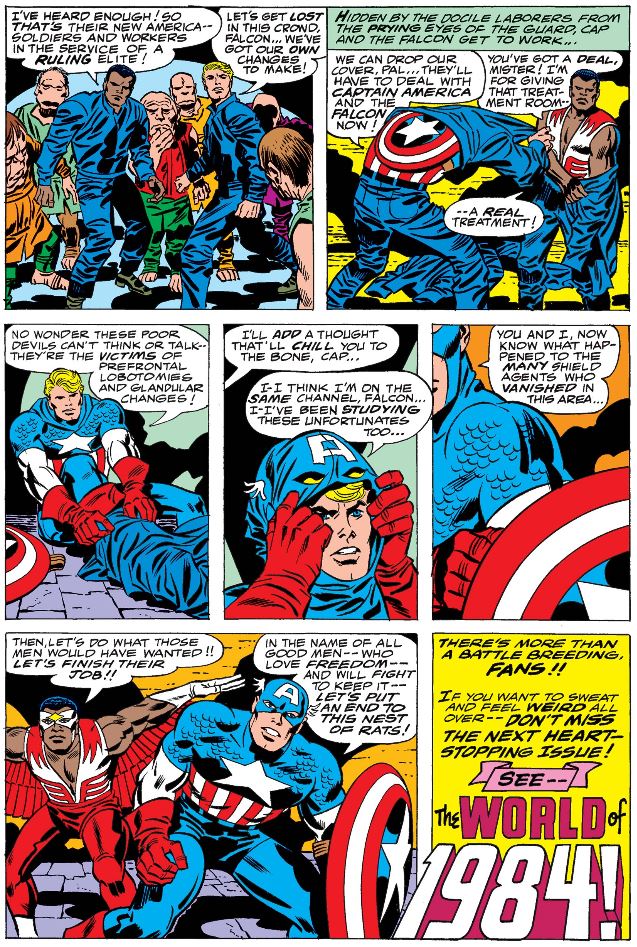 That’s right… the next issue (and post) invokes some themes from George Orwell’s famous novel of creeping totalitarianism, and shows some disturbing prescience on the part of Jack “The King” Kirby.