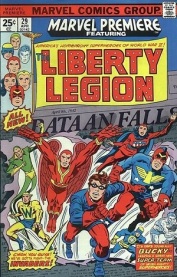 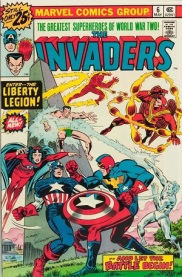 These four issues, a crossover between Invaders and the anthology series Marvel Premiere (best known for some amazing Doctor Strange stories by Steve Englehart and Frank Brunner), introduce the Liberty Legion, yet another retconned assemblage of once-forgotten Timely Comics heroes from the 1940s, several of whom would live on in Marvel infamy. Captain America doesn’t feature a lot in these stories—for a reason that will soon become clear—but hey, forgotten Golden Age heroes!

Invaders #5 opens with a scene so disturbing that I cannot in good conscience inflict it on you, my loyal readers: Cap, Namor, the Human Torch, and Toro destroying an American defense plant and pledging fealty to the Third Reich, culminating in a radio address from none other than the Red Skull, announcing that the Invaders are now invading the U.S. on his behalf.

Not until the bottom of page 7 do we begin to learn the truth about this heart-wrenching Spencerian display of betrayal on the part of our heroes. As FBI agent Stuart tells President Roosevelt, it started out just like any ordinary day in 1942… 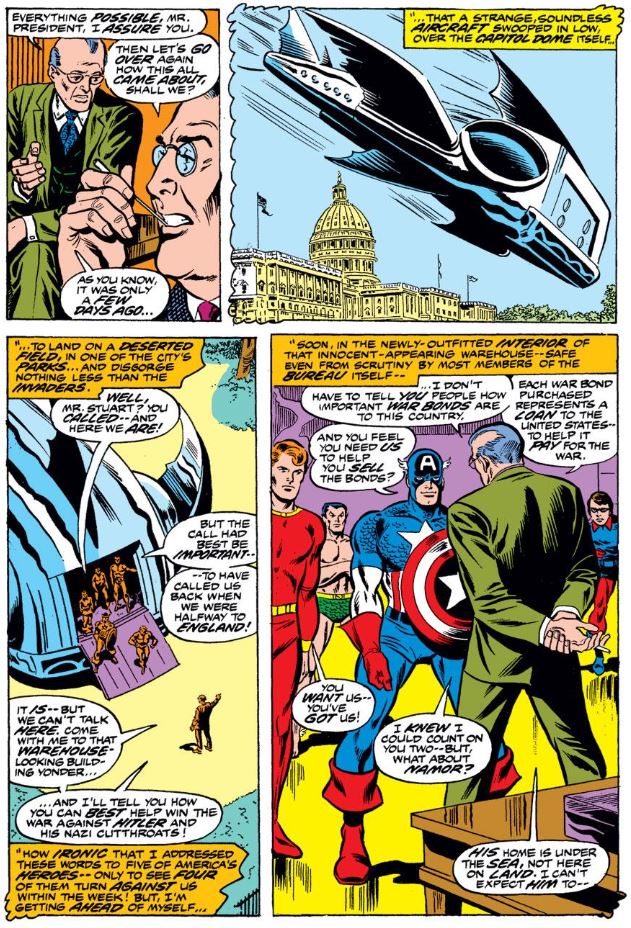 Many celebrities pitched in to sell war bonds at that time—some gave everything, such as legendary actress Carole Lombard, who died in a plane crash between bond rallies—but I have to wonder if the Invaders might have better things to do with their particular skillset. (This ain’t the movies, after all.)

But I digress… while Namor joins the war bond effort, Bucky and Toro catch up on their comics, showing that even in World War II, there were Timely Comics being published in their universe about the heroes in that universe (as they still do today). And like true fanboys, Bucky and Toro are very demanding in regards to accurate detail… especially concerning their own adventures.

Just when Namor’s had it, Cap makes lemons into lemonade, inspiring the rest of this four-part tale.

I appreciate how Cap refuses to claim the red, white, and blue as “his own” colors, reminding Bucky that he doesn’t embody the country, but only proudly represents it.. (And he’s not the only one, as he learns!)

Soon thereafter, while the Invaders are appearing in a war bond parade down Fifth Avenue in Manhattan, Nazi gunmen attack, posing no serious threat themselves but heralding a much greater one.

Four of the Invaders either fly into the Skull’s vortex or are sucked into it, but the Red Skull rejects Bucky, calling him a mascot with no use to him (implying that he plans to brainwash the other heroes into working for him, which explains the alarming beginning to our tale). But James Buchanan Barnes is not taking this insult lying down, instead bursting into FDR’s office and asking him and Stuart to get him on the radio… only to be rejected again.

In Marvel Premiere #29, Bucky “invades” a national radio broadcast featuring William Mace, otherwise known as the Patriot. If that name seems familiar, you deserve a cookie… or at least an explanation, which you’ll get later in this post. (The cookies are all mine!) 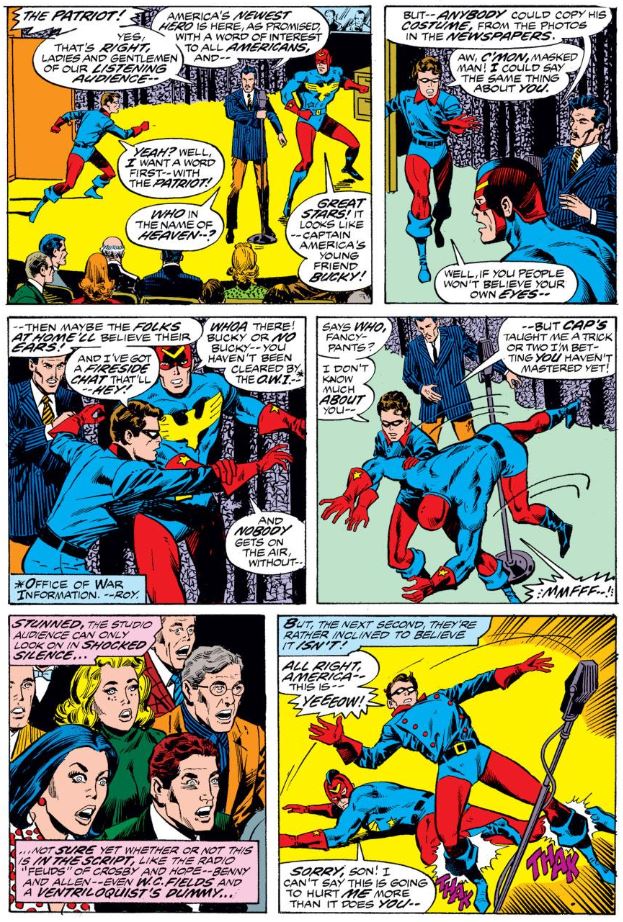 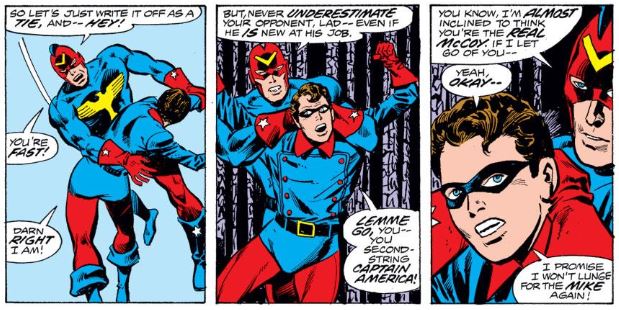 Naturally they fight, and the Patriot comes out on top (even without any special powers or abilities), and decides to trust the young man, who explains his plan.

Bucky puts out the call over the air waves, and for the rest of the issue he and the Patriot review the files on the other heroes (and showing a bit of their adventures) while they wait. I’ll show you just Miss America’s, because she shares Cap and Mace’s patriotic theme, and has superpowers to boot. (And besides that, she’s just really cool.) 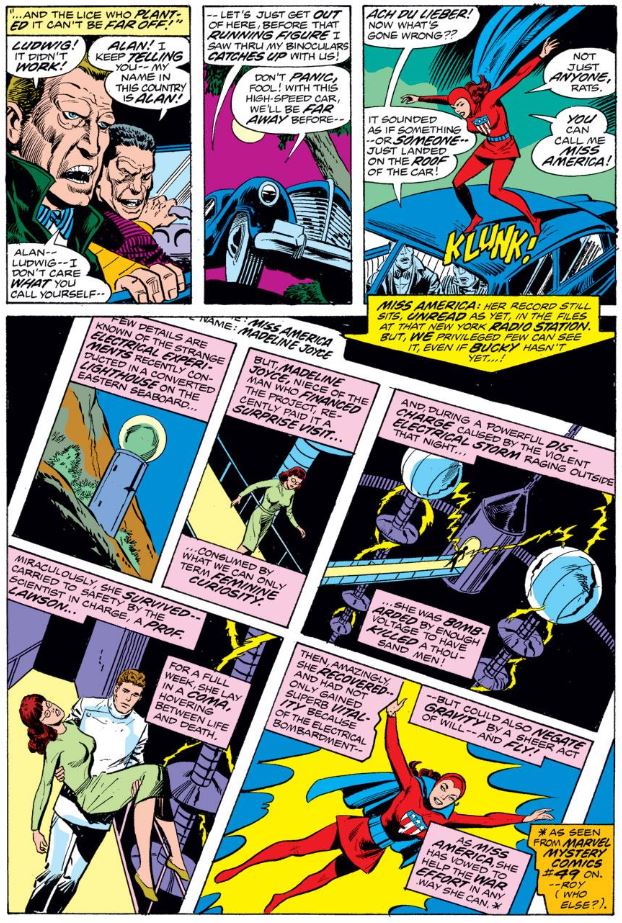 (A bit of trivia: Miss America was co-created by legendary comics writer Otto Binder, who also had a hand in creating Mary Marvel and Supergirl, three great heroines for three different comics companies!)

Below we see the entire new team, the Liberty Legion, designed to protect the United States while the Invaders are in Europe… or mind-controlled by the Red Skull. (Whichever.)

From left to right: Jack Frost, Patriot, Miss America, Bucky, the Blue Diamond, the Red Raven, the Thin Man (yes, named after the Dashiell Hammett novel and the movie starring William Powell and Myrna Loy), and the Whizzer, whom we know from modern-day appearances in the Avengers (starting with Giant-Size Avengers #1). Of course, Roy Thomas—being Roy Thomas—gives plenty of background information on each of these heroes, not only in the editor’s notes in the panels but also in text pieces at the end of this issue of Marvel Premiere and the next.

In Invaders #6, Bucky holds his very own press conference to introduce his new team. 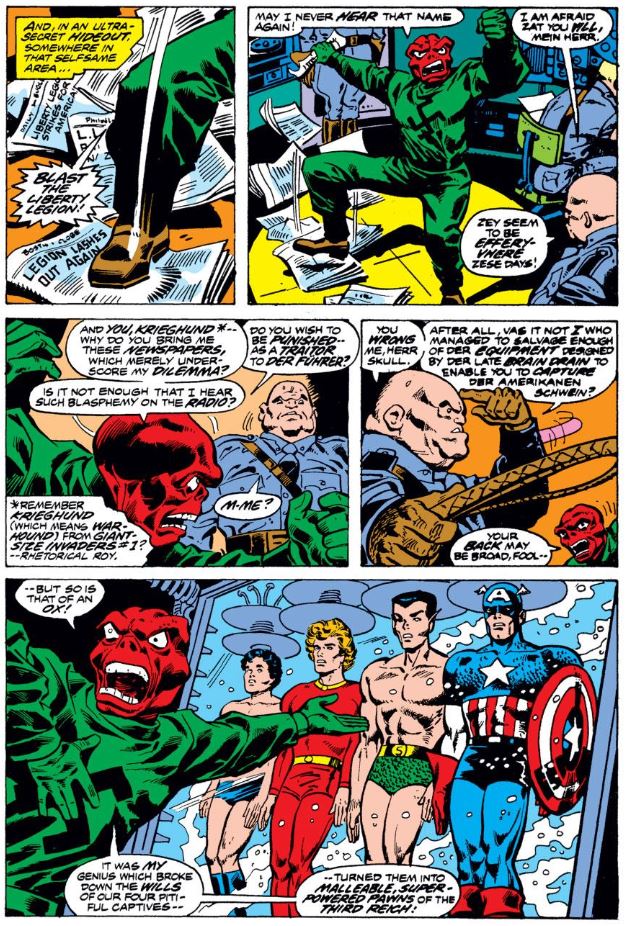 …and reminds us of his secret weapons (now that we’re back in their own book again).

The Skull announces over the radio—the Twitter of its day—that he’s sending the Invaders to various American landmarks to face the Legion, with the brainwashed Cap going to Independence Hall in Philadelphia to face (naturally) the Patriot and Miss America.

(Does everyone know that, though? I didn’t know that, and I’m not sure it’s right, but I am pretty sure the Red Skill twisted the Invaders’ thinking, so it’s all good.) 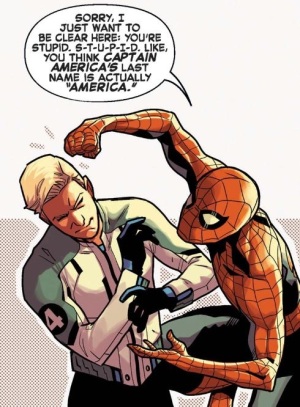 I get a kick out of Miss America’s comment above about she and Cap having “the same last name,” which reminds me of the more recent panel to your right with Spider-Man and Johnny Storm (a different Human Torch), from Marvel 2-in-One #4 (May 2018) by Chip Zdarsky, Valerio Schiti, and Frank Martin.

One can certainly commiserate with Patriot here—feelings that will become even more poignant once he becomes one of Steve Rogers’ replacements after his “death” (as we learned in our discussion of Giant-Size Avengers #1, and which is shown in What If? #4).

The Red Skull, observing the fight, deduces that Cap is losing because the “nulla-rays” interfere with his reflexes, so he recalls him until the rematch between the two teams at Yankee Stadium in Marvel Premiere #30. 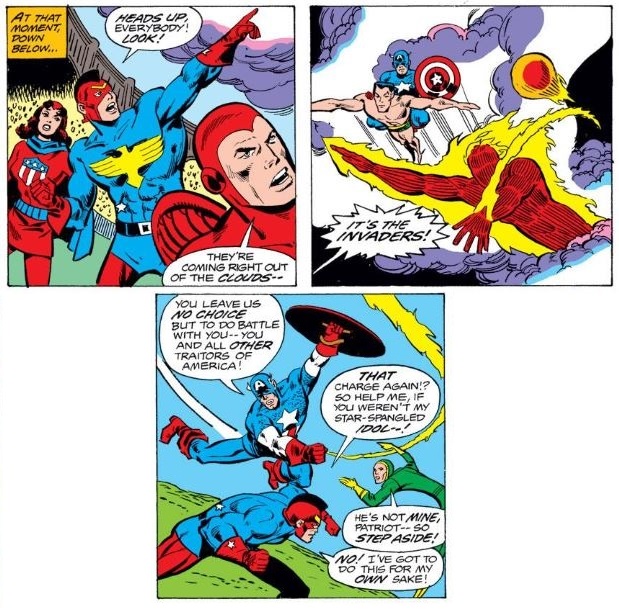 The Patriot has the same misgivings, but doesn’t let that stop him, and he echoes the same point Cap made in Invaders #5, proving that he will make a worthy successor. (Perhaps this was already in Roy Thomas’ mind when he chose to revive the character here.)

While the grown-ups are fighting, Bucky manages to capture Toro and break his hypnosis, after which the young Torch flies up to the Red Skull’s blimp with predictable yet satisfying results, including breaking the hypnosis of the rest of the Invaders and freeing Cap to be concerned about the onlooking baseball fans.

He also makes sure to note the Patriot’s courage and to thank his young partner, demonstrating his generosity and gratitude.

As the story comes to the end, Cap is wisely suspicious of yet another “death” of Red Skull (of which there will many more to come), the Patriot threatens to make Bucky’s head even bigger, and the collection of heroes pledges to work together to defeat the Third Reich once and for all. 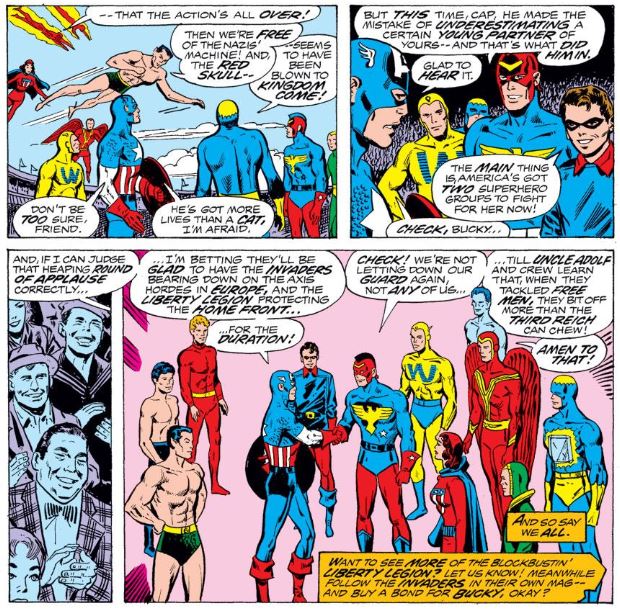 Stay tuned to see which members of the Liberty Legion work with the Invaders again in future issues!

Collected in: Invaders Classic: The Complete Collection Volume 1 and The Thing: Liberty Legion