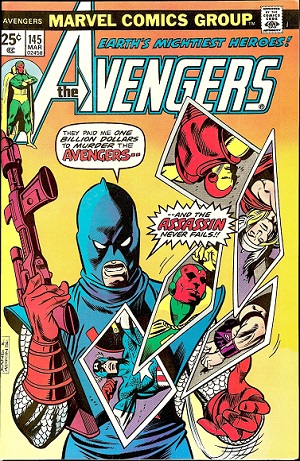 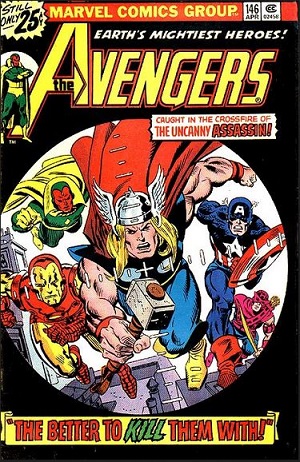 This two-issue tale, inserted in the middle of the Serpent Crown story, was originally planned for Giant-Size Avengers #5 (which ended up being a reprint issue), but was instead used as a fill-in story in after Avengers #144 because of deadline difficulties. As such, it’s a relatively self-contained story, apparently fitting in continuity-wise between issues #149 and 150 (because Cap rejoins the team during the Serpent Crown storyline that ends with issue #149 and Thor leaves the team in #150). As a story, it focuses less on Cap’s behavior than on the other Avengers’ thoughts about him, considering he spends most of the story… well, we’ll get to that.

Issue #146 starts with the mysterious Assassin and his equally mysterious benefactor watching game film, with some insightful commentary on Captain America. 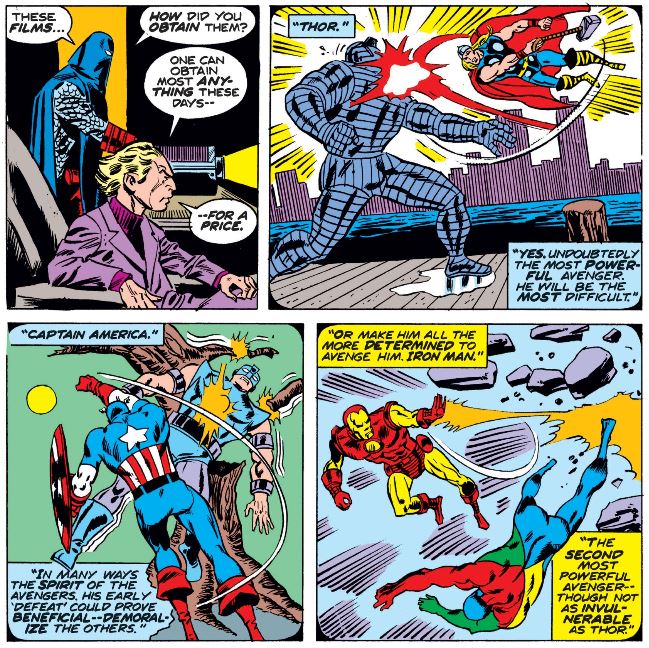 Once their plan is set, they follow their own advice and make their first… 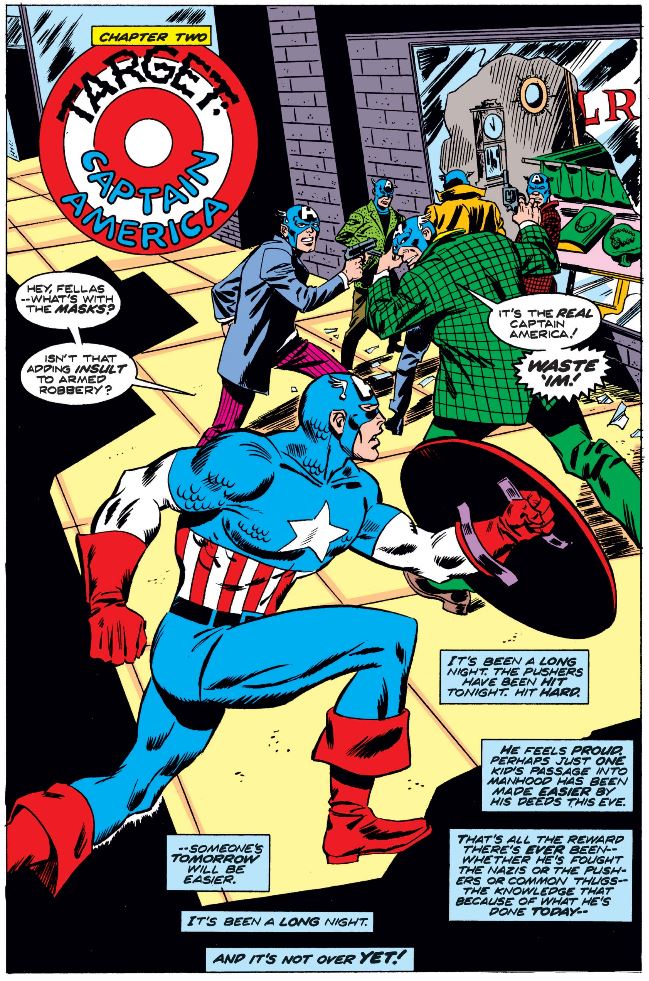 The exposition above, regardless of the odd placement of the text boxes, is a nice expression of the general mission of the hero… and one that any of us can live up to, powers or not.

Below we get a fairly pedestrian battle with some frankly exasperated banter from Cap, assuring the thugs that this is hardly his first rodeo. 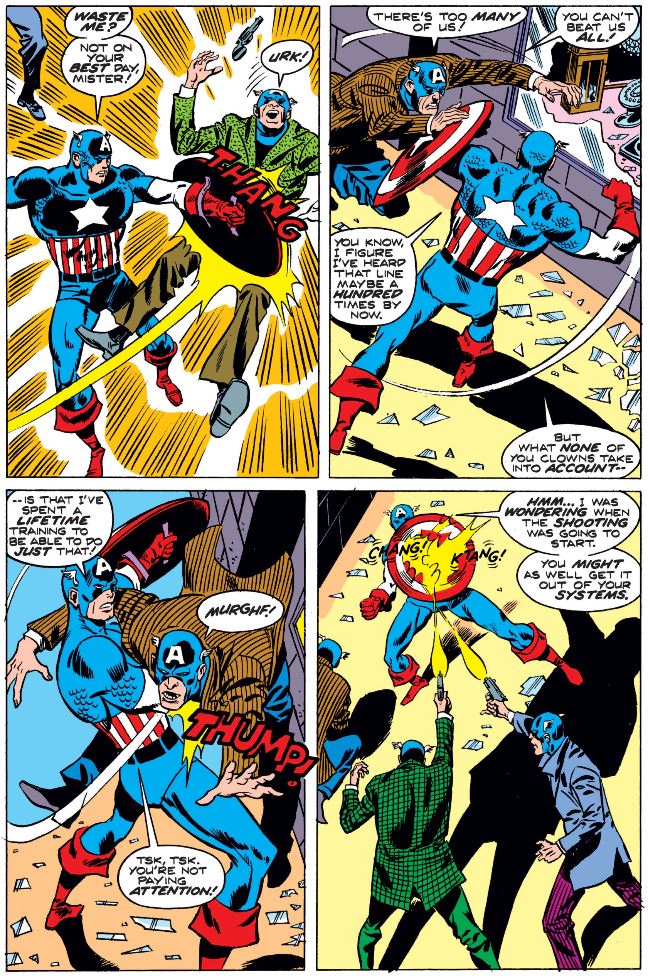 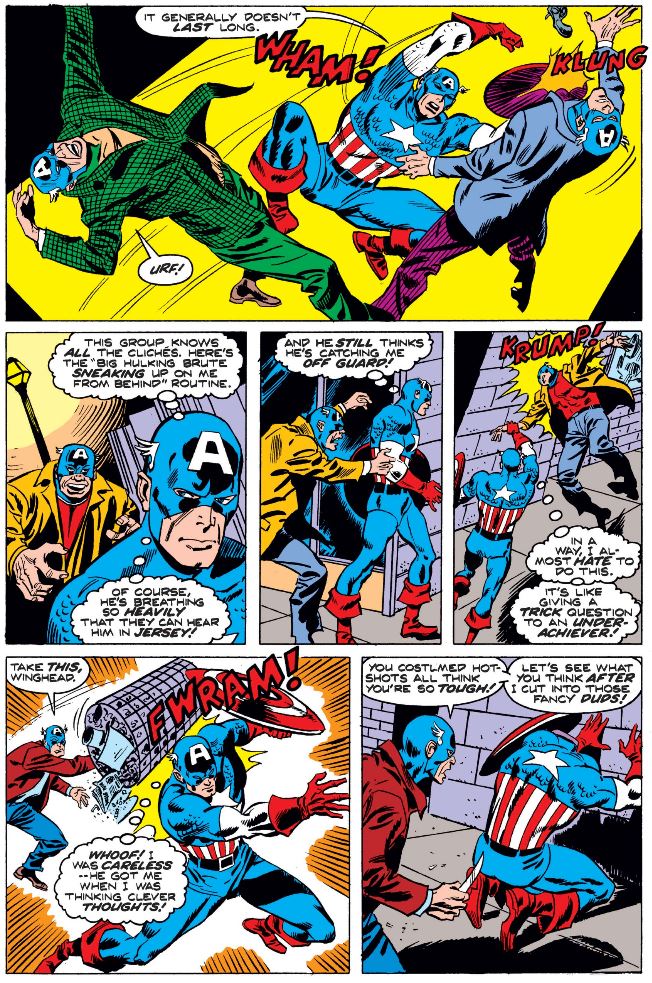 Above we see that even the weakest foe can take advantage of overconfidence. (Save the clever thoughts for Twitter, Cap!)

I wonder if his comment below was at all in reference to his recent escapades out of costume. 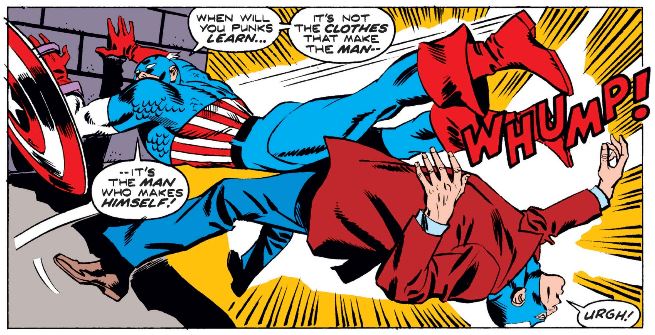 Eventually, the Assassin reveals himself, and has the gall to criticize Cap’s momentary lack of eloquence before incapacitating him. 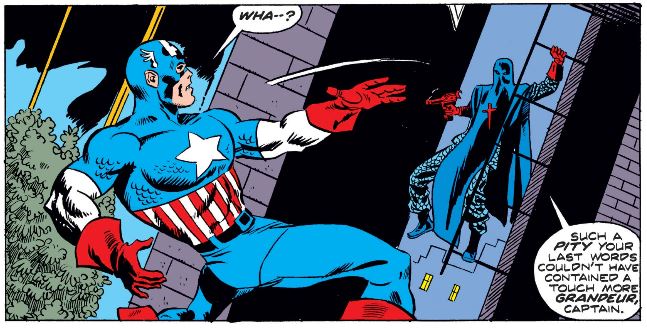 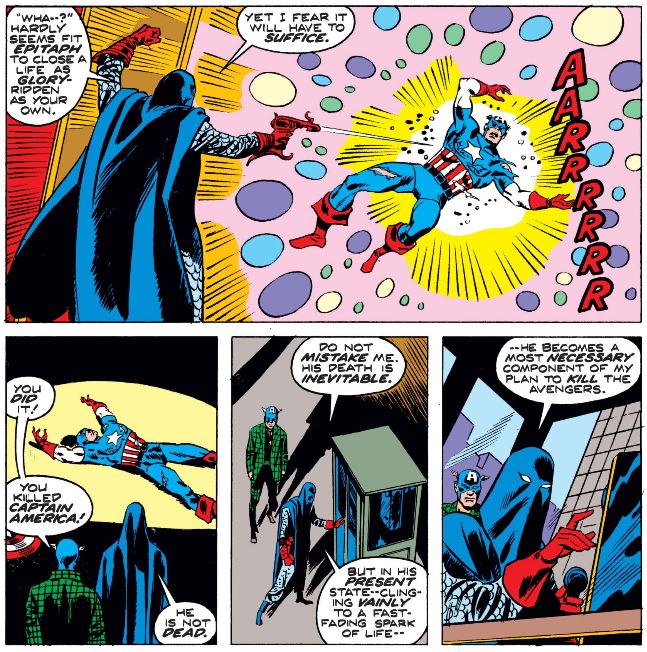 After paying an elderly woman to call the authorities to report a “dead” hero in the street (and then killing her), the Assassin achieves the first part of his plan: “demoralize” the other Avengers, as we see in the rest of this issue as his teammates worry at his bedside and consider his importance in their lives. 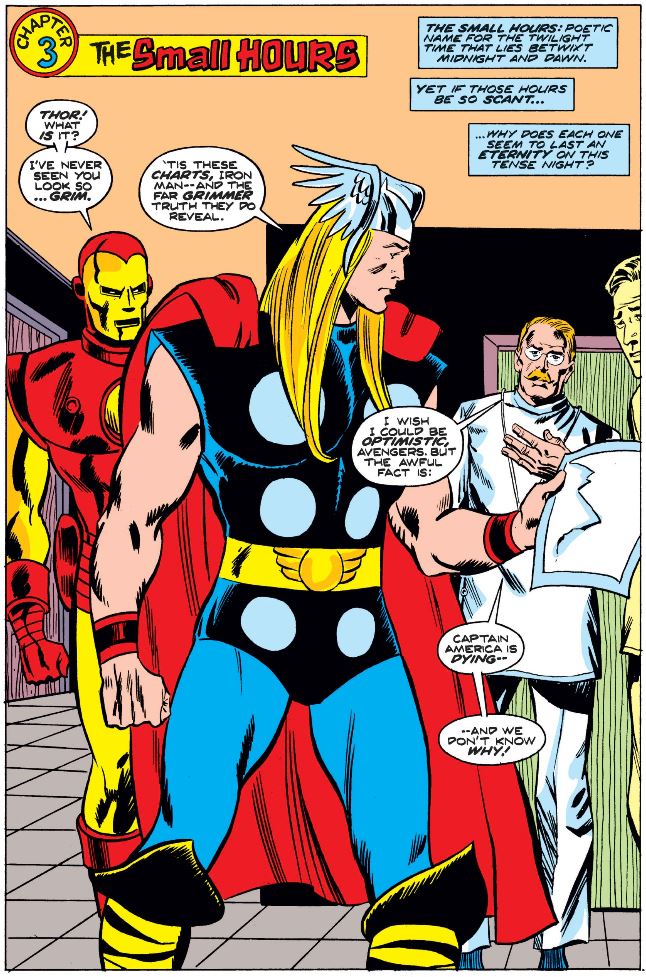 And it’s not just his fellow Avengers, as we see from his attending doctor below, and also Hawkeye, from whom we’ll hear more soon. 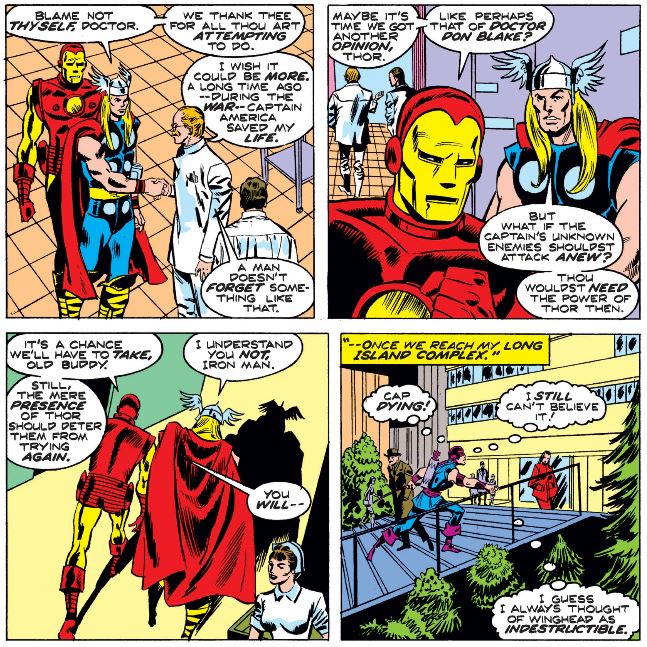 (I guess we can’t blame Clint, after he served as one of Cap’s pallbearers in Captain America #113, only to see him “return from the grave” soon thereafter… and that won’t be the last time!)

While Clint fights some of the Assassin’s goons elsewhere in the hospital, we see others of the team at Cap’s bedside (or close to it), with Wanda in particular reflecting on her history with Cap (and perhaps subtly thinking of her crush on him in the early days of Cap’s Kooky Quartet). 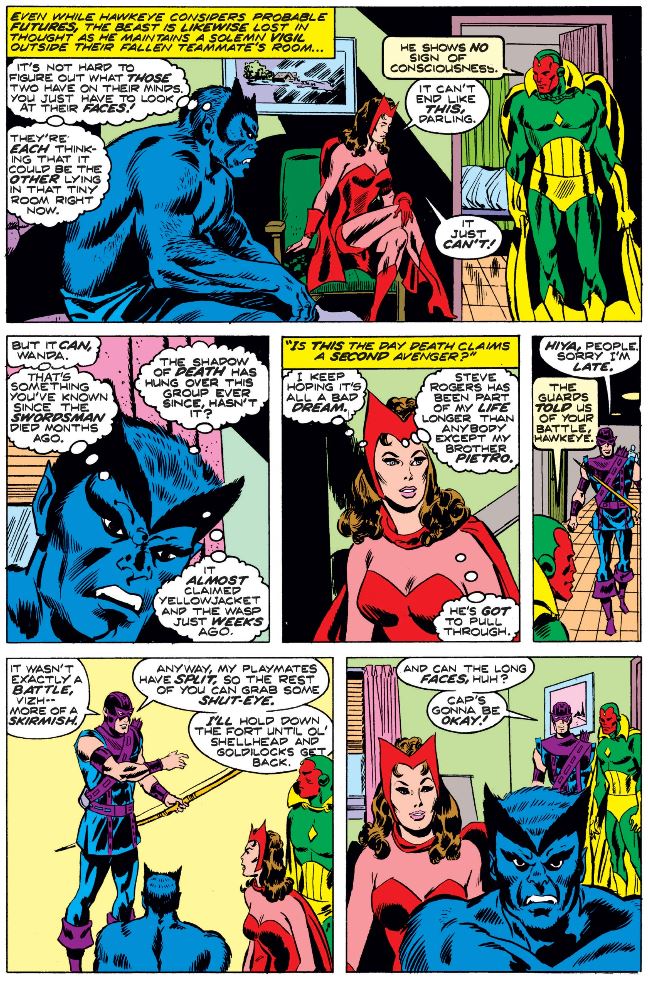 Hawkeye gets in a joke about Cap’s age—another welcome callback to the Kooky Quartet days when Clint regularly razzed Cap, about which he reminisces a bit before remembering how he came to respect the old man.

Even the Vision recalls his own debt to the man lying in bed with his mask still on. 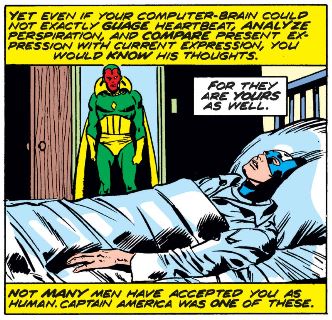 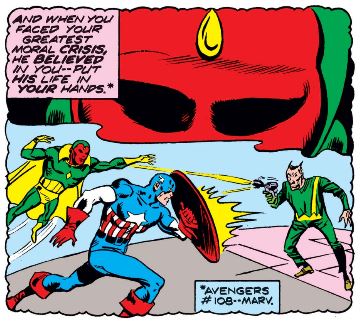 As issue #146 opens in Avengers Mansion, Wanda is joined by the Falcon as well as Yellowjacket and the Wasp. (This is one more clue that this story takes place after the Serpent Crown story, during which both were recovering in the hospital from an earlier battle, although in issue #150 they say they “just” got out of the hospital to attend an Avengers meeting to discuss the team roster.) 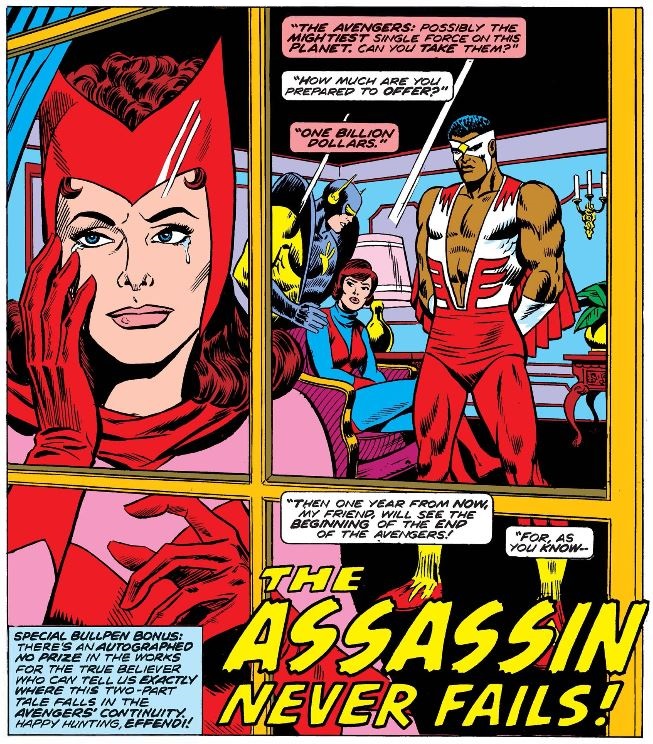 (No kidding! Not an easy one to place, this story.)

Below we see Cap in the operating room—still with his mask on—under the care of Dr. Donald Blake, the mortal side of Thor… but then who’s that waiting outside the door? 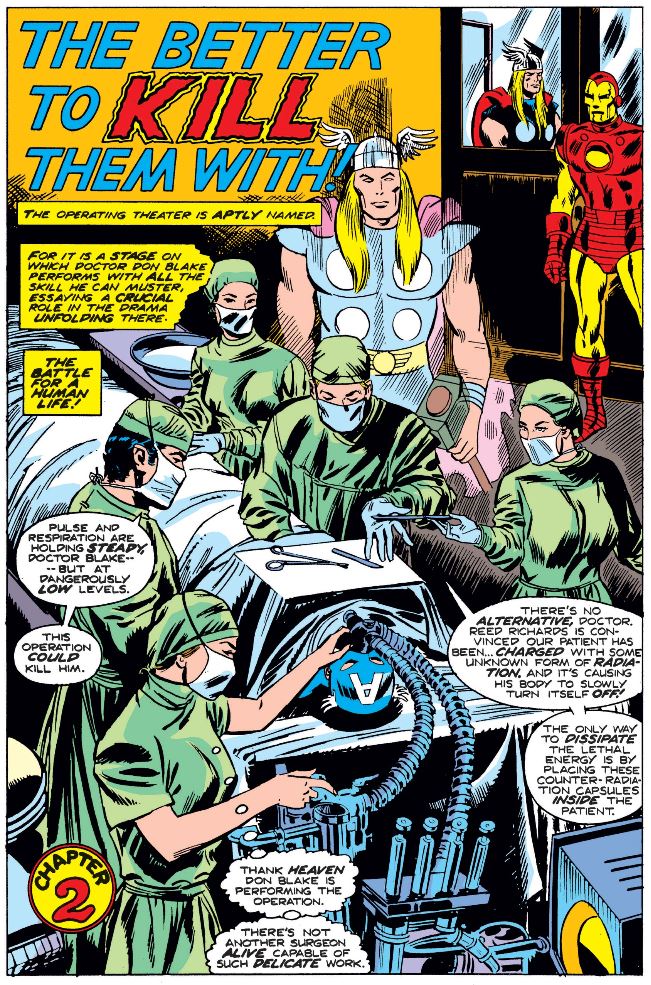 I guess Tony is making his own life model decoys now. 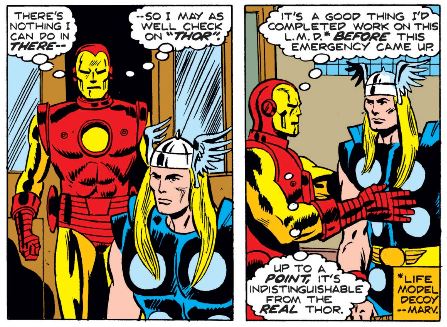 I’m not sure we want Tony making fake Thors, though, as readers of the “Civil War” storyline will surely attest.

Cap spends the rest of the issue unconscious, so there’s not a lot more to say. The Assassin makes his move, shooting the Thor L.M.D. in the back and poisoning Iron Man, Hawkeye, and the Vision with tainted coffee—the monster!—which is designed to paralyze the drinker and then stop their heart. (In other words, exactly the opposite of the effects of normal coffee.)

All three escape their fate, but Hawkeye’s “method” is by far the most interesting. 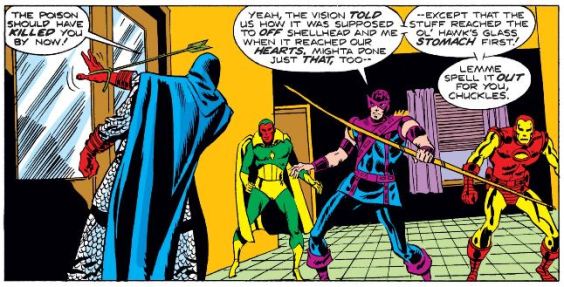 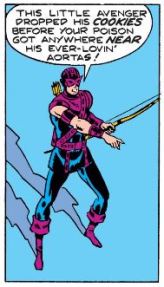 They can’t all be winners, folks.

We don’t even see Cap in the rest of the issue… we have to read about it in the newspaper. (At least he gets top priority in the headline and story.)

Collected in: Avengers: The Coming of the Beast, Marvel Masterworks: Avengers Volume Fifteen