This issue and the next are a return to traditional superheroics after the presidential diversion of the last issue as two classic villains—at least one of them beloved on this blog—team up to face Captain America, who continues to adjust to his new life as Steve Rogers, freelance artist, with new friends and neighbors in his apartment building in Brooklyn.

But first, Cap indulges thoughts of his past and future while surveying the city he loves.

Naturally, much of this reminiscence, as he notes below, is a result of his “reawakening” in issue #247, when his real memories replaced the false ones, seen in issue #225, implanted by the government during WWII.

This leads into a short recap of how Namor and later the Avengers found him, and the key points of his life since then, including friends and foes… 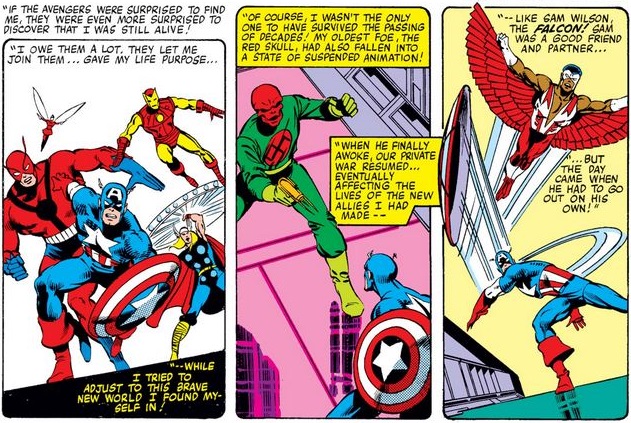 …as well as the love he recently lost. (I love the shadowing on his face here.) And just in case you forgot what S.H.I.E.L.D. stands for, we have you covered.

His reverie breaks when he remembers his present dual life and his future awaiting him… which evidently does not involve sleep, at least for the time being.

Seriously, though, this unnecessary display of acrobatics for nobody in particular (except the reader) shows us his improved state of mind, aware of his past, secure in his present, and looking forward to what is to come. Good for him!

After a few pages explaining the backstory of this issue’s villains, we return to Brooklyn and our hero, just finishing up an all-nighter, when who should stop by… 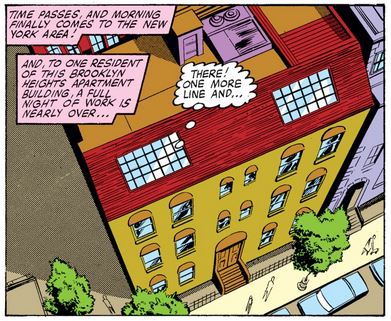 …but his new neighbor Bernie Rosenthal, with whom Steve seems very comfortable already (perhaps reflecting his more positive state of mind, and perhaps something else—I’m not telling!). 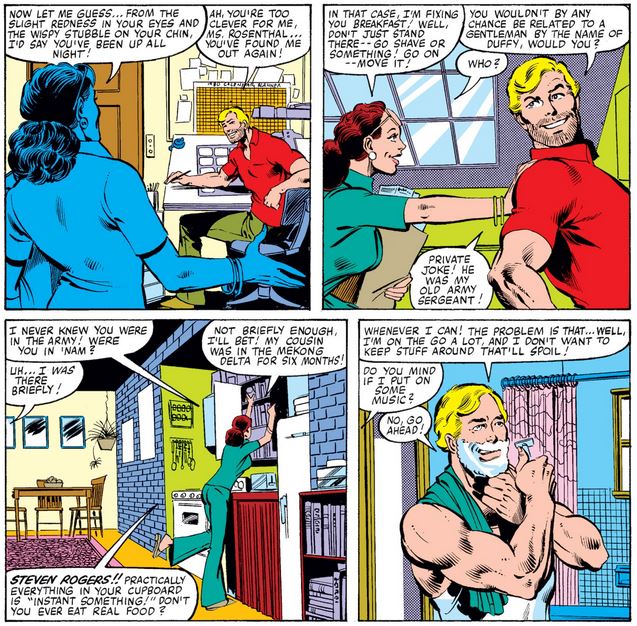 As someone currently reading an Artie Shaw biography, I must say I have no idea what Bernie’s point in the first panel below is. But I completely understand her reaction at seeing the photo about his stereo. (His sister… nice try!)

We can only imagine his reaction if he hadn’t just been remembering Sharon the evening before. But Bernie deftly changes the subject to something cheerier… a prison break!

Yes, that’s very nice, Bernie, but I want to talk about the excellent job Steve does here prioritizing his two duties, and judging that his work deadline takes precedence over the supervillain problem that plenty of other superheroes in New York can handle, especially two that have dealt with Mr. Hyde. And did I mention that he recognizes that he’s exhausted and can’t be the Captain America that New York deserves at this moment? This is quite an admirable degree of self-awareness of both limitations and multiple responsibilities that we may be used to seeing in Spider-Man comics but not Captain America.

While on his way to see his current employer, Steve gets a clue as to those responsible for the prison break, and his boss notes his sleepiness…

…and so does Steve, but he can’t help leaping into action once he realizes who the Frenchman in question likely is. (And I guess an empty stairwell is as good as a phone booth for a mild-mannered artist for a metropolitan advertising agency!)

Below, Cap shows he’s budget-conscious (even if he wasn’t necessarily aware that the U.S. inflation rate in 1980 almost reached 15%) while he heads to see the district attorney.

While Cap is in is office, the D.A. receives Batroc and Hyde’s ransom demands—including a very specific choice of hostage, one who has no choice but to comply when innocent lives are threatened.

In the fourth-to-the-last page of the issue, Cap finally comes face-to-face(s) with his foes, but he already has a trick up his sleeve…

…or under his foot, as it were.

Above we get confirmation of Cap’s distaste for subterfuge, which nonetheless I seem to have to note on this blog an awful lot—the lesson being that Cap would rather not do it, but that preference is easily outweighed by the benefits in most cases. (In other words, he’s principled but not stubborn enough to regard all principles as being equally deserving of upholding at any cost.)

Below, John Byrne and Josef Rubinstein pay tribute to one of my favorite Jack Kirby panels (from Tales of Suspense #85) while Cap questions Batroc on his uncharacteristically dishonorable behavior (which you’d think would really hurt coming from Cap, if Batroc were as honorable as he claims).

And the other guy? 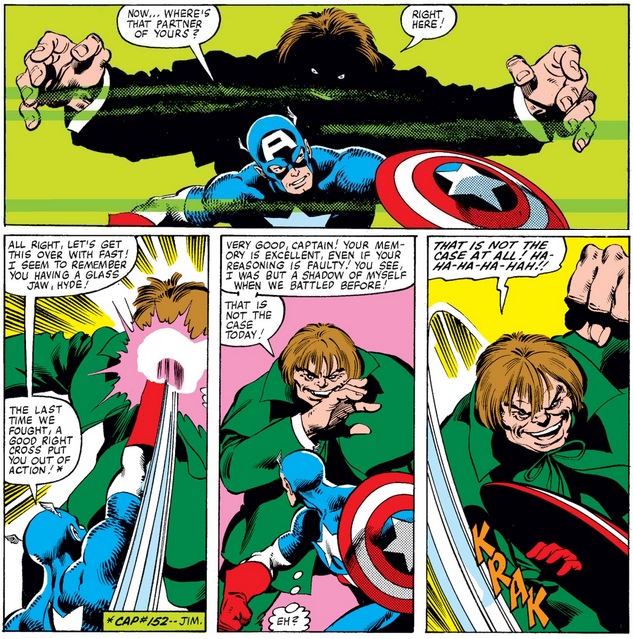 Now we see Cap’s exhaustion finally catch up with him, and Batroc perhaps shows some of the honor Cap accused him of having… 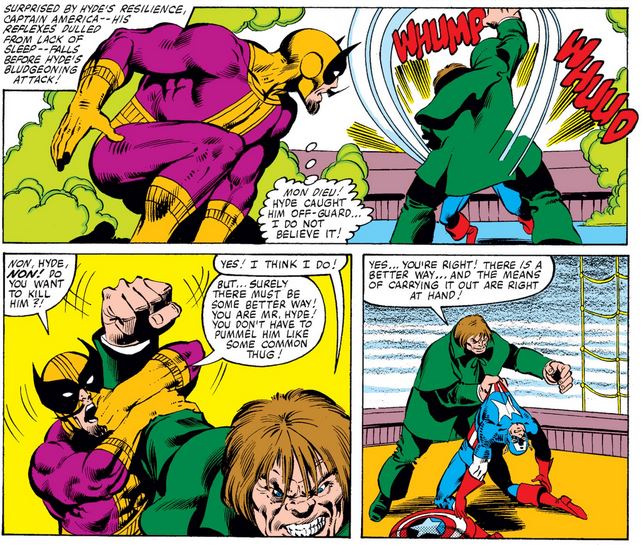 This is certainly a classic Batman TV show ending, isn’t? Come back for the next post, same Cap-blog, same Cap-time… but a different day, you know, because I post on Mondays and Fridays.