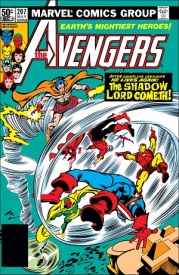 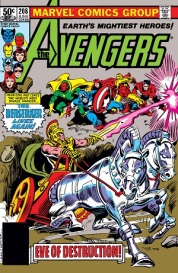 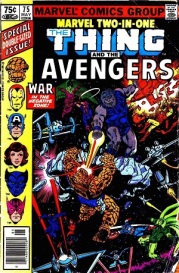 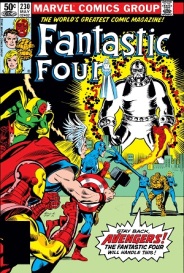 These four issues, like those in the last Avengers post, have minimal ethically-relevant Captain America content, and I will not include as much story context as I often do, but they all contain something of interest for the discerning reader (by which I mean you).

In Avengers #207, the mysterious Shadow Lord has raised a city off the shore of Spain, not far from where Wonder Man just happens to be shooting a movie (with Beast tagging along), so Cap calls with orders and Iron Man offers a ride—courtesy of his “boss,” of course. 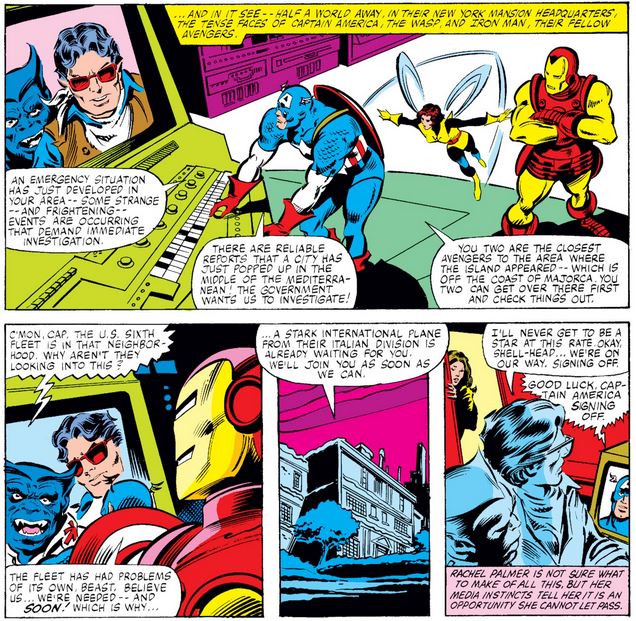 Things escalate, requiring the whole team, and some strategy from Cap… 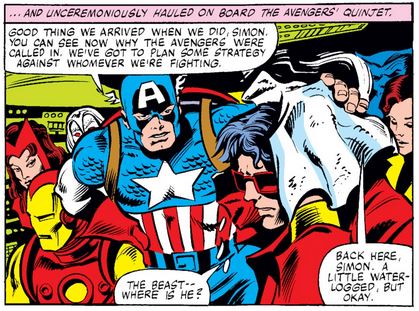 …which we see below. (That’s Shadow Lord at the upper left, if you hadn’t guessed, with his hostage, Wonder Man’s publicist Rachel Palmer.) 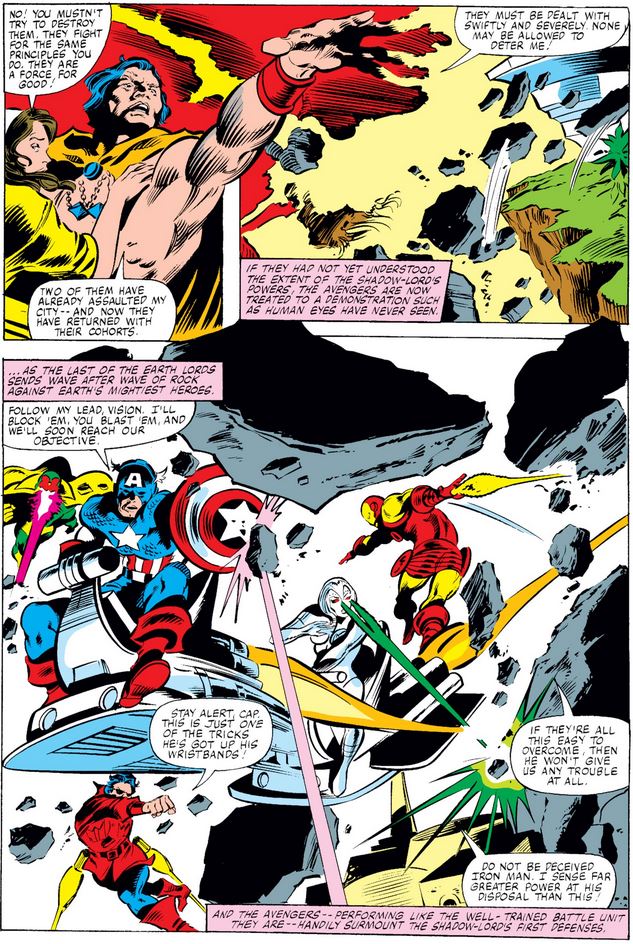 In Avengers #208, Rachel summarizes the end of the previous issue: The Avengers manage to defeat the Shadow Lord, who reveals, before he dies (from non-Avenger causes), that he was trying to protect the world from a greater threat named the Berserker. In the nonsequential pairs of panels below, Cap tells Rachel he regrets what happened but defends their actions as the best they could do with the information they had at the time. Then, like a good leader, he asks for more information to make better choices next time. 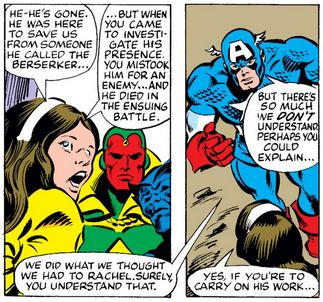 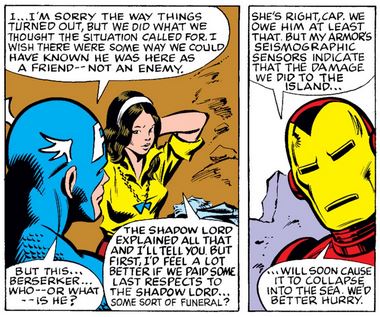 Before pursuing the Berserker, the team pays the Shadow Lord the respect and dignity he’s owed as a fallen comrade-in-arms—an uncharacteristically solemn and touching sequence for a character just introduced in the last issue.

When the team finally faces the Berserker, Cap speaks valiantly and defiantly before eventually falling to his foe. 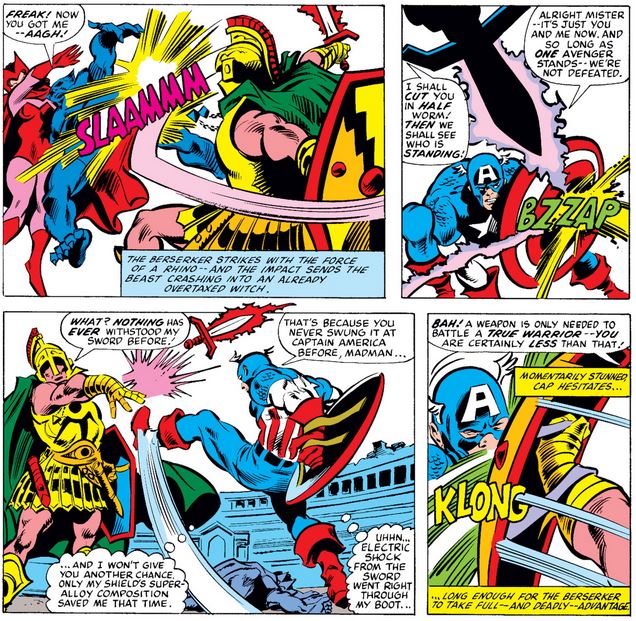 I won’t spoil which Avenger is chiefly responsible for defeating the Berserker. (I’ll just let you wonder.) 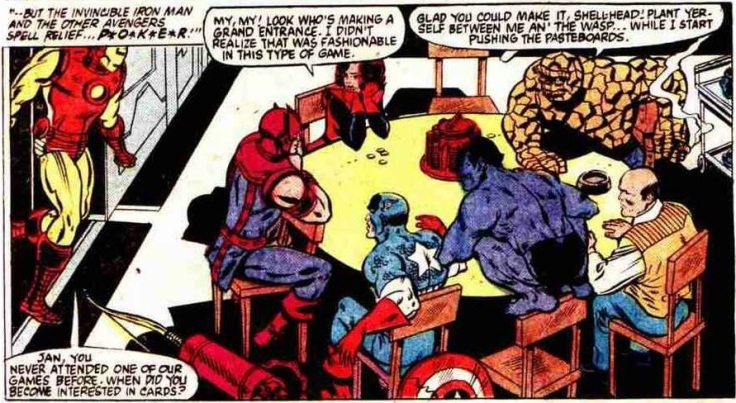 …at which we learn that Cap has an advantage at poker that perhaps even he isn’t aware of. 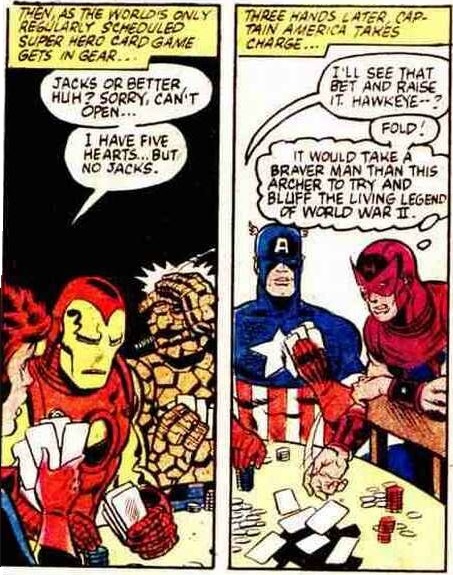 (Maybe Clint won’t bluff, but as we learn later, he does cheat.)

When the assembled heroes receive a distress signal from an alien queen named Nyglar seeking the Fantastic Four’s help against two of their foes, Annihilus and Blastarr, in the Negative Zone—an anti-matter dimension Reed Richards “discovered,” much to the surprise of its inhabitants—they debate whether to help, with Cap predictably wanting to help someone in need, Iron Man and Hawkeye being more pragmatic, and the Beast wrapping up with the most devastating comment of all. 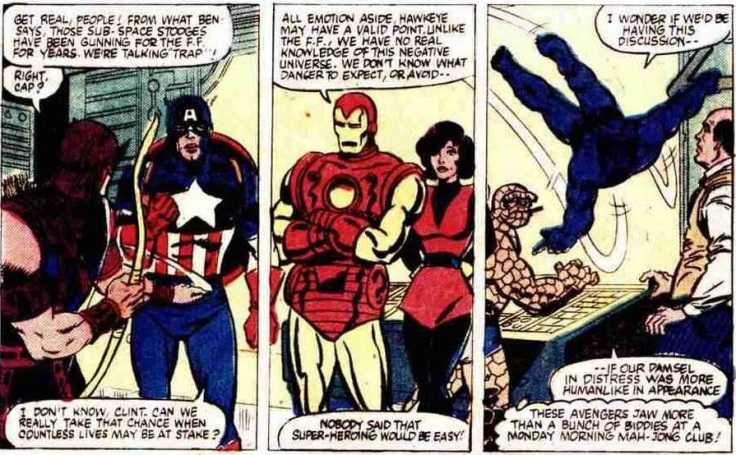 As you no doubt guessed, our heroes do leave for the Negative Zone, where they fight both foes plus the Super-Adaptoid, whom Cap and the Avengers fought back in Tales of Suspense #82-84 and Avengers #45. The Negative Zone is hardly Cap’s natural habitat, but he avails himself well nonetheless, using his knowledge of strategy, leverage, and a little acrobatics.

Later, even a sprained arm doesn’t stop Cap, much to the amazement of his armored friend… 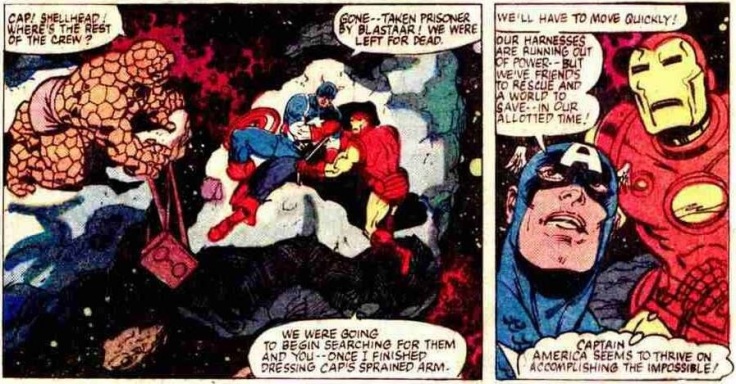 …and, I’d imagine, the Super-Adaptoid himself, who again forces Cap to rely on his hand-to-hand combat skills against a much larger and stronger foe. 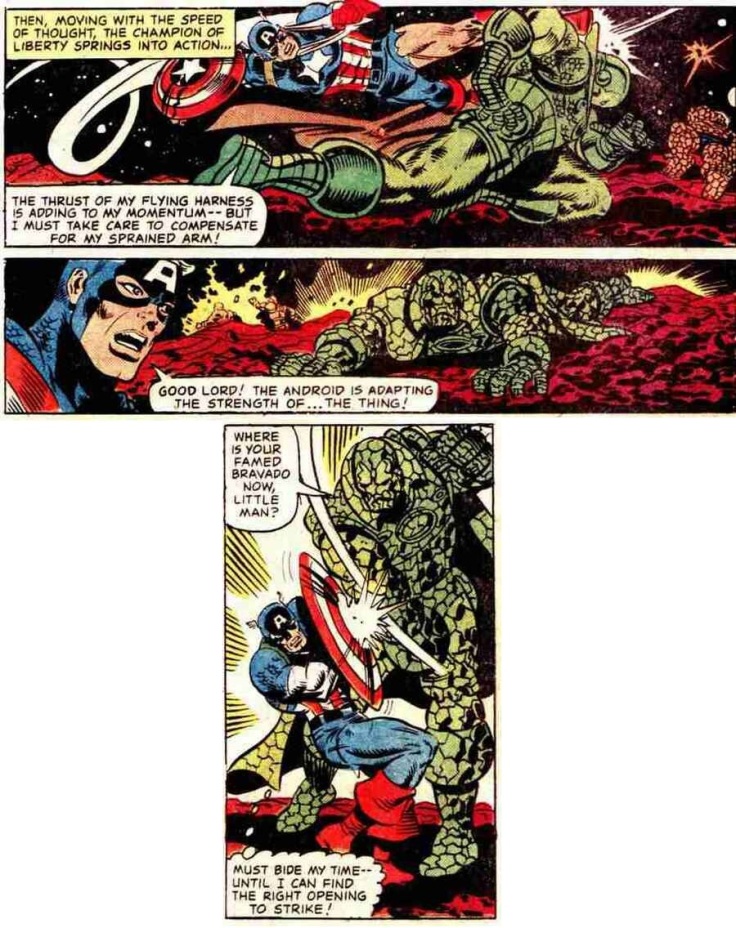 You thought I was kidding about the Super-Adaptoid acknowledging the virtues of Captain America? 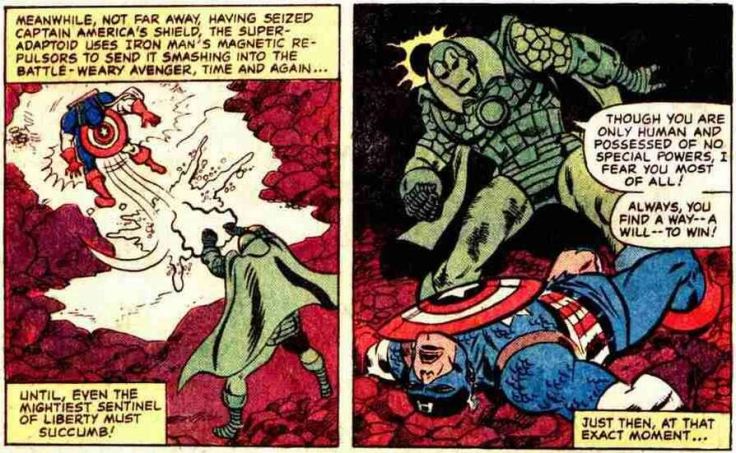 Naturally, the star of the book gets to defeat the bad guy, after which Captain America is the one silently expressing admiration, seeing right through Ben’s self-deprecation. 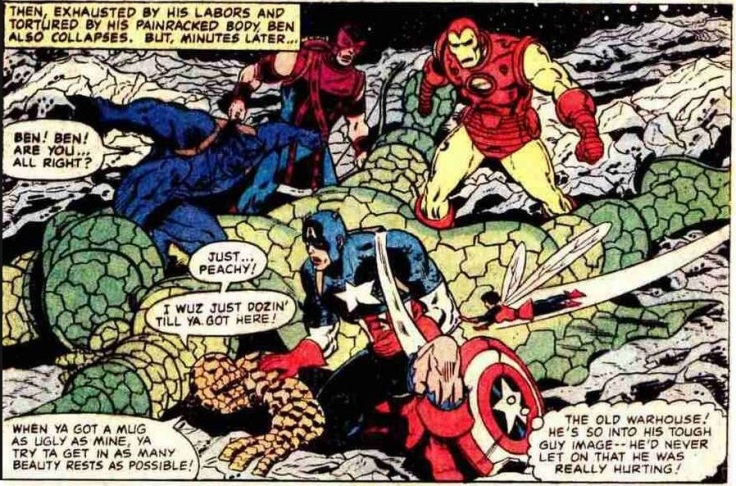 Finally, in Fantastic Four #230—you know, Ben’s other title—we have Negative Zone shenanigans yet again, with the Avengers about to stumble onto, and into, Reed’s plans. 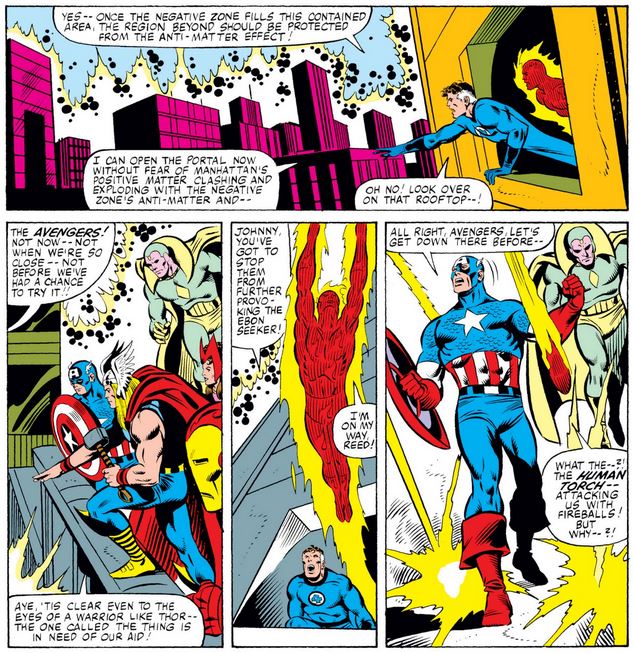 Look at Johnny try to assert himself over the Avengers (literally)…

…and then confuse himself with Jim Hammond, the original Human Torch—which is the only logical explanation for implying that he’s been at this longer than Cap (though he is technically right about his team).

All collected in: Marvel Masterworks: The Avengers Volume Twenty