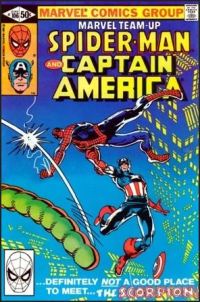 This is a fairly straightforward team-up comic, with the star-spangled guest-star not even appearing until halfway through, and then engaging in a traditional battle alongside the friendly neighborhood Spider-Man against the Scorpion. Nonetheless, as with most of Captain America’s guest appearances, his virtues are highlighted throughout, both by Spidey as well as the narrator.

When Cap first appears in this comic, it is as Steve Rogers, mild-mannered commercial artist, hoping to work for a major metropolitan newspaper… coincidentally, the same one that occasionally employs a young Peter Parker, whom Steve knows from his amazing and spectacular photos of Spider-Man. (Remember that, back then, most heroes were unaware of each other’s secret identities, if they had them.) 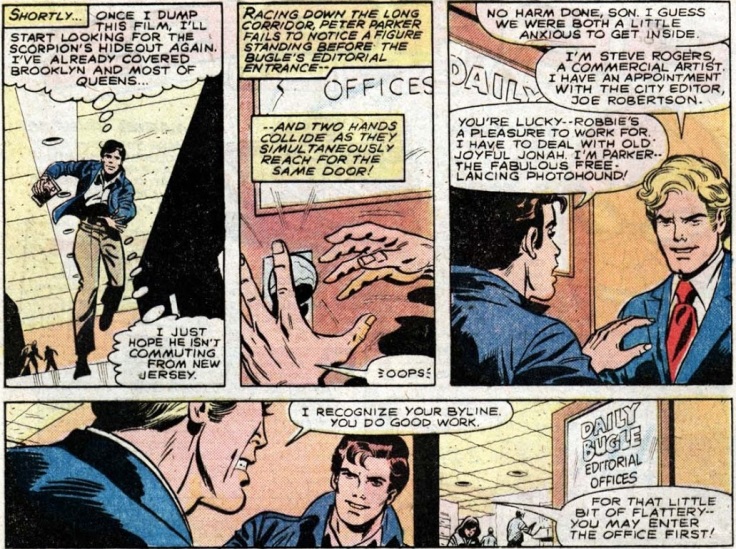 As they head into their respective meetings with bonhomie, Peter’s first impression of Steve is unique if not surprising…

…but when they run into each other afterwards, they’re somewhat deflated. (Watch out, Steve, the Parker luck is contagious.)

I can’t see Peter meeting Steve as an artist without thinking of their later interaction, in May 2012’s Avenging Spider-Man #5 by Zeb Wells, Leinil Francis Yu, and Gerry Alanguilan, in which Steve seems ashamed of his early artwork, and Peter ends up helping him rediscover his love for it. 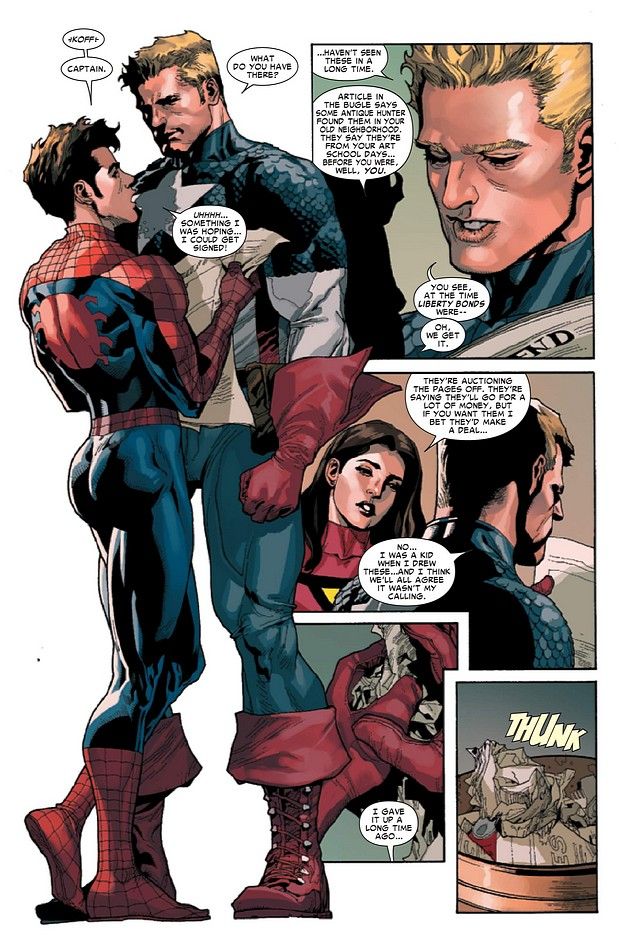 Anyway, back to 1981… we see below that J. Jonah Jameson wants picture of Spider-Man, but does not want jibber-jabber, and he definitely did not want to be attacked by the Scorpion. (If he knew there were two superheroes nearby, he would never have offered such a high reward to his employees for protection!) 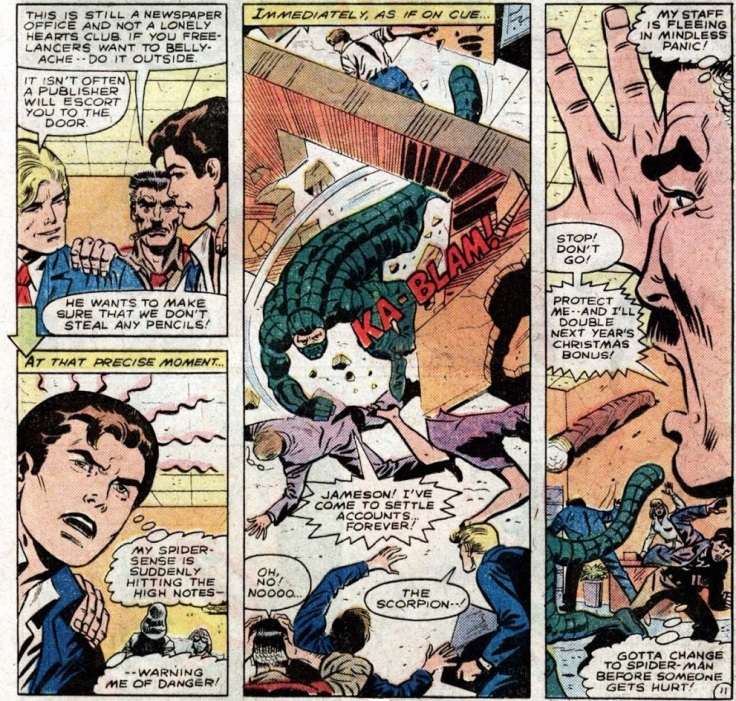 Those two superheroes need to suit up, and it seems Steve beat Peter to the best spot—as well as the Scorpion’s scheme, it seems. 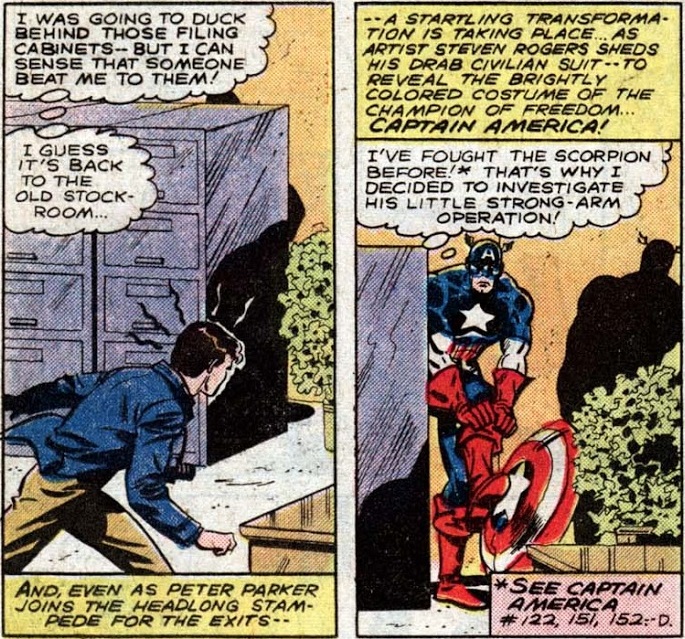 But there is another hero on the scene: Robbie Robertson, who puts himself between the Scorpions and his friend, who (silently) shows a little humanity for a change, before Cap appears and J.J. returns to his normal sour, cynical self.

You heard it here, friends: Captain America has no respect for “dibs.”

Cap wastes some of his best speechifying on the Scorpion… 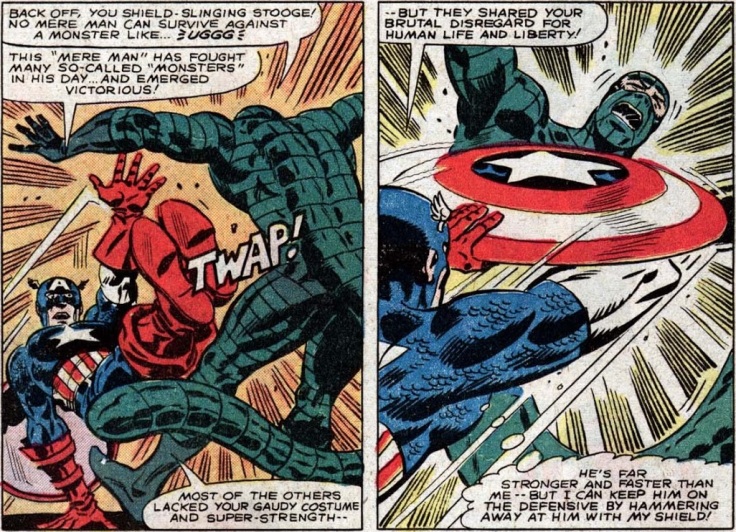 …but the villain manages to get a good hit in just as Spidey finally joins the action. 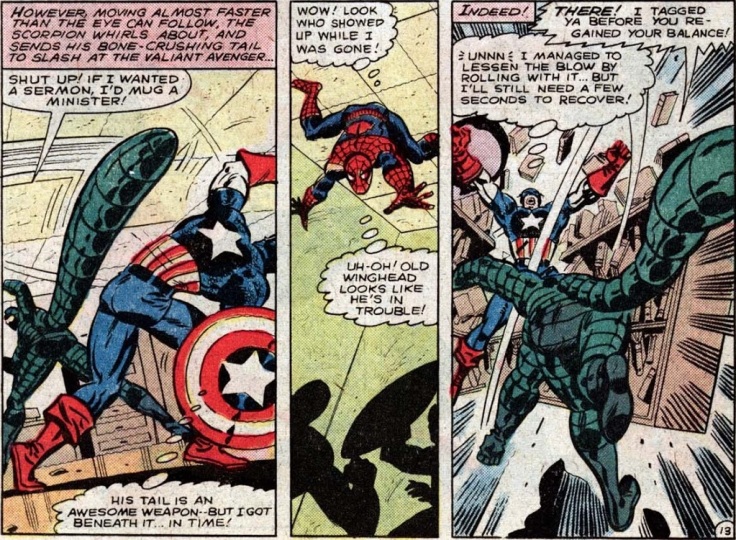 While Cap’s down, the Scorpion manages to get the best of Spidey and then tosses him out a window. Cap reacts instantaneously, jumping out the window after him and then maneuvering midair to try to save both their lives.

The crowd reacts quite differently to the Sentinel of Liberty and “that menace Spider-Man,” while Cap humbly deflects the younger hero’s gratitude. He also apologizes to a civilian for the clothing display they ruined and offers compensation, saving the Manhattan court system a little trouble… 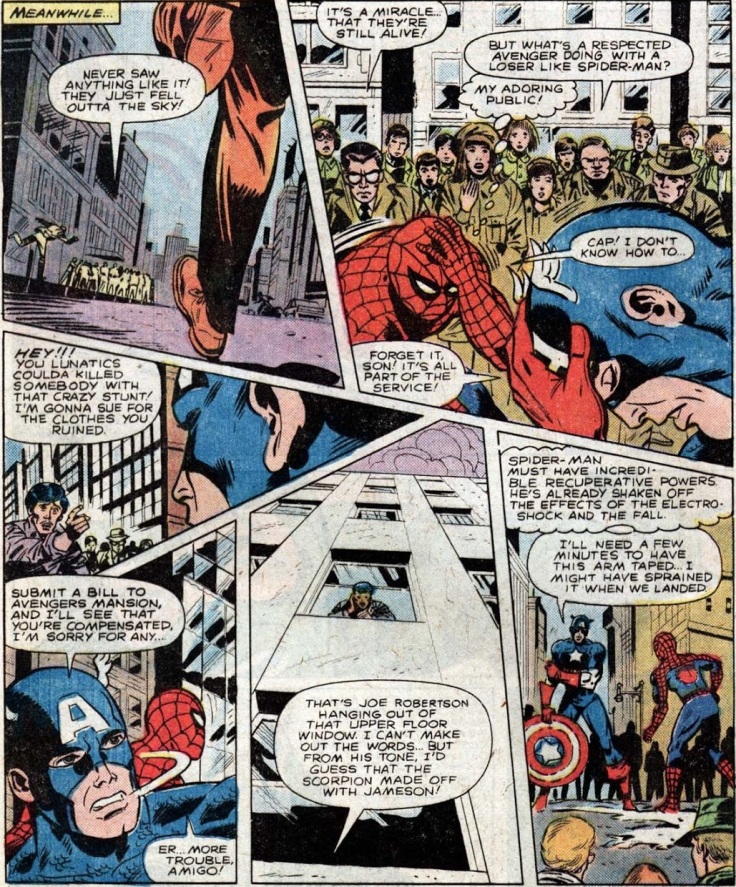 …and marvels at Spidey’s constitution while admitting he needs a little medical care himself, showing that superheroes don’t need to be “tough guys”!

As he leaves the scene, Spidey reveals a bit of jealousy about his city’s love for Captain America…

…even though Cap has to ride in a cab while Spidey swings around the skyscrapers. 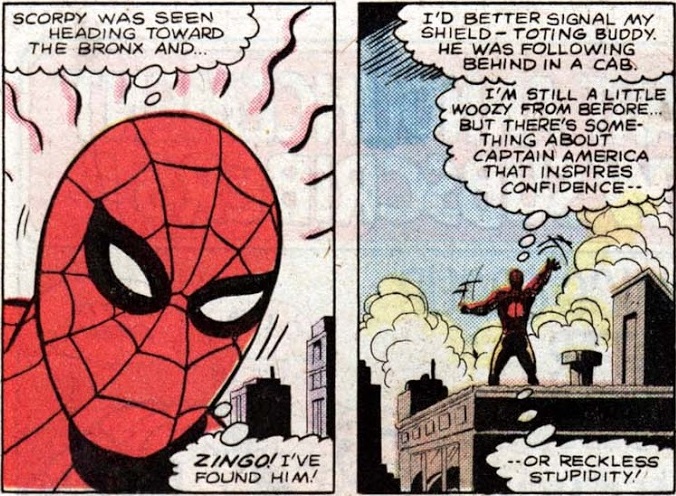 (I vote for the former, but I may be biased.)

The Scorpion’s goons pose no challenge to our heroes, especially when they look out for each other (not that Spidey needed it, of course).

Confident in Cap’s abilities, Spidey chases the Scorpions and his captive, J. Jonah Jameson. Although Cap feels slightly handicapped by his dressing…

…in the end he needn’t have been concerned.

Cap finds the Scorpion shooting electro-shocks at Spidey and J.J., and although he acknowledges that his fellow hero could handle it, he just wants it over with! 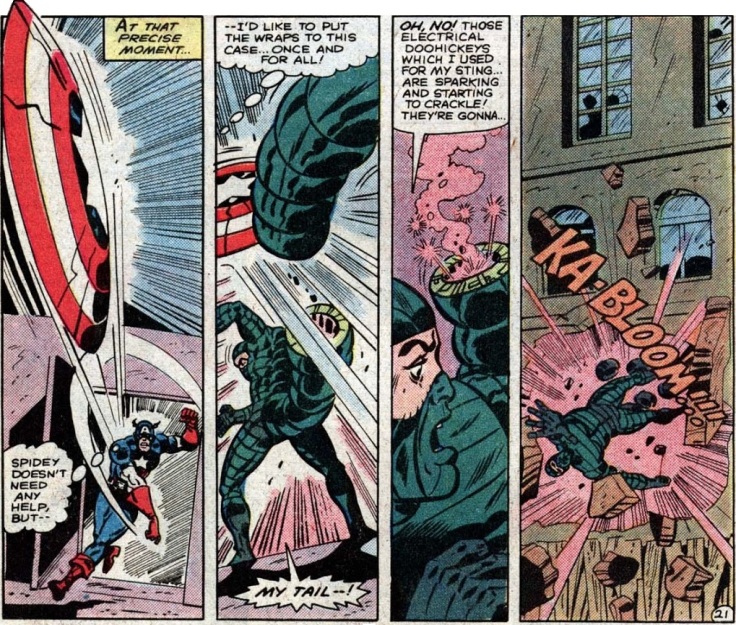 The Scorpion is down but not out, and both heroes are sympathetic—and perhaps tired—enough to realize they don’t need to do much to take him out.

(Still looked pretty painful to me!)

Of course, extending sympathy to the Scorpion didn’t leave much for Spidey to give to anyone else.

Not yet collected, but very likely available from your local comics shop for a song.