This issue returns us to Captain America’s status quo in Brooklyn Heights after adventures and remembrances kept him in England since issue #253 (excepting the origin issue #255). It also welcomes back one of my favorite Cap artists, Mike Zeck, on both interiors and the cover. Best of all, this issue pays tribute to some real-world heroes and the sacrifices they make every day to keep the rest of us safe.

But first… date night! Steve is definitely feeling like a “man out of time” and not enjoying the company of Bernie Rosenthal, whom we last saw when Steve ran out on her to leave for England. (Good to see he’s got his head in game, sigh.) 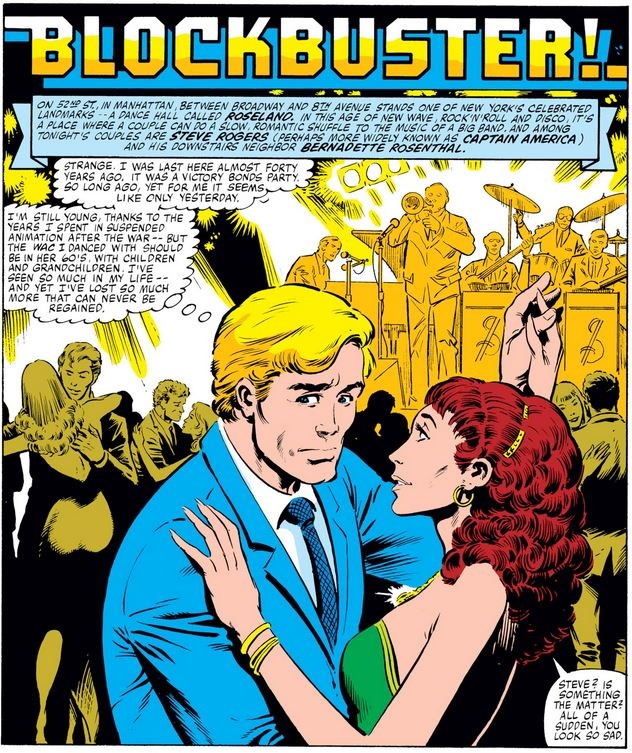 Even when he snaps back to the present, Steve can’t hide that he is very much a man of the past. (And I suspect a certain Leaper gave him a few French lessons!) 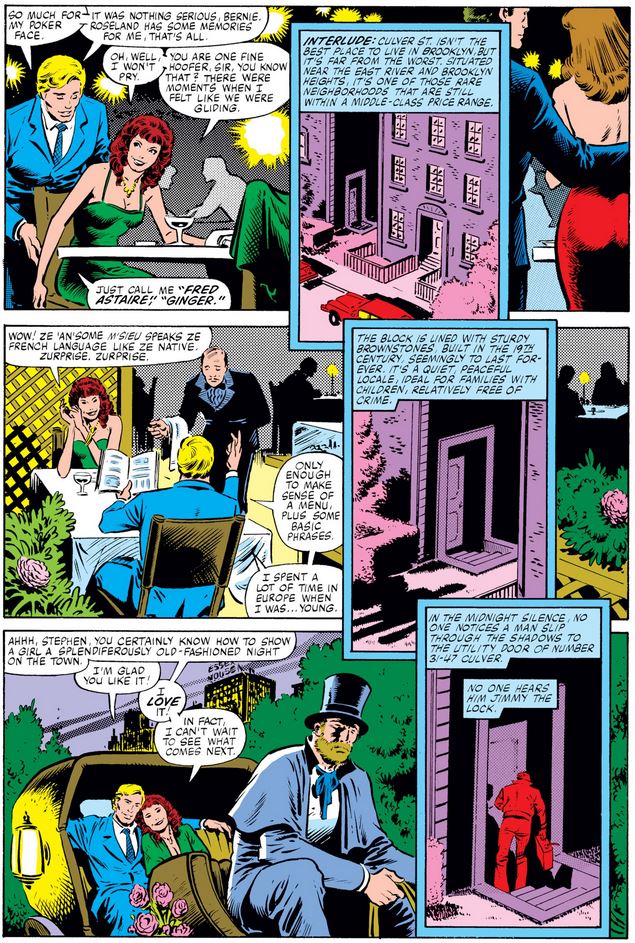 After Steve walks Bernie back to her apartment (in the same building as his), he has an epiphany of sort about the joys of the ordinary life that been denied him for so many years. But just as in issue #253, the moment they approach each other, disaster strikes! 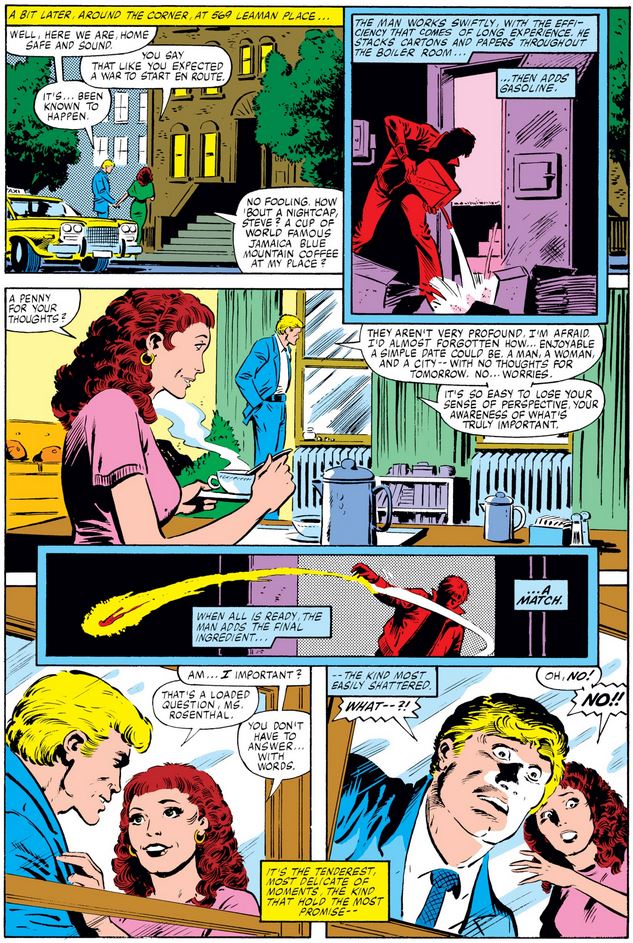 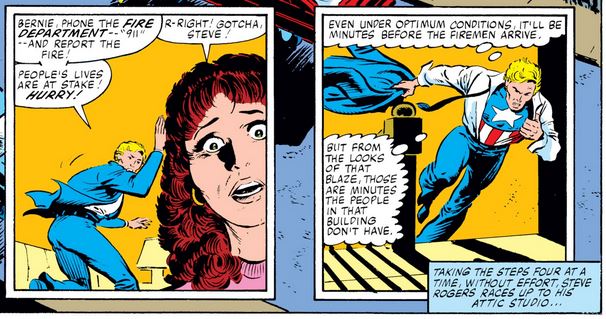 …and rushes to the scene, criticizing himself all the way.

Cap uses his shield to zipline into a window in the burning building while thinking, not about his own safety, but about the danger both the fire and smoke pose to those inside.

He continues to search for other tenants and rejects the help of others, while making sure they know that he appreciates their efforts and intent.

Although he is beginning to succumb to smoke inhalation, Cap perseveres, managing to block a falling ceiling with his shield before the professionals show up to help get the tenants out safely…

…and Fireman Sam Douglas gets Cap himself out, while noting another hardship Cap was ignoring to save more people.

Douglas manages to hand Cap off to his colleague just before disaster strikes.

We interrupt this scene to flash forward to issue #263, in which a firefighter named Jim Baals offers a correction in a fan letter: 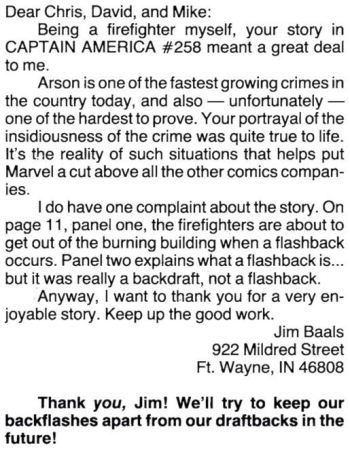 Back to our story… As we learn below, the firefighters battled the blaze all night, saving the adjacent buildings, but still missing one of their own: Sam Douglas, the firefighter who saved Captain America.

On the ground, a nurse tries to convince Cap to have his lungs checked out in a hospital, but Cap is not thinking about himself, especially after he realizes that another hero, Sam Douglas, sacrificed his life saving him.

That’s Cap’s neighbor Mike Farrell helping carry the stretcher above, and when he returns to the apartment building, his friends are waiting to support him. 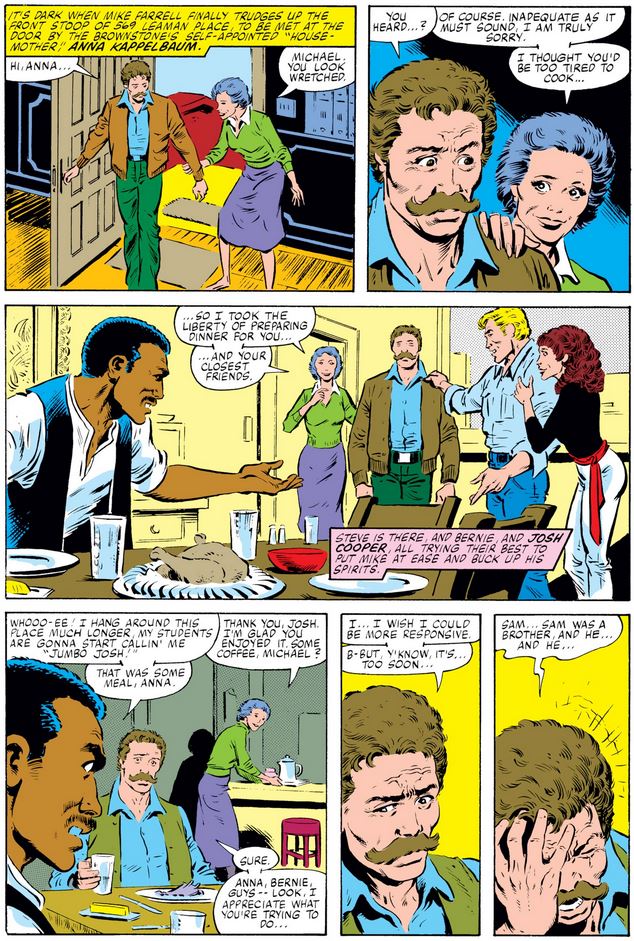 While Anna soothes Mike in his grief, Steve tries to offer sympathetic words. I’m sure he would have liked to tell his friend that Sam died a hero while saving a life, but can’t reveal how he knows that. I’m sure he has many more from his WWII days, but again he can’t reveal that, so he shares a recent experience—one that triggers a memory in Bernie as well.

The exposition in the panel below makes clear that Captain America is hardly the only hero who feels the pull of duty—every firefighter, including Mike Farrell, does the same every day they’re on the job.

For his part, Cap is determined to find the person responsible for setting the blaze that endangered his city… and cost Sam Douglas his life. 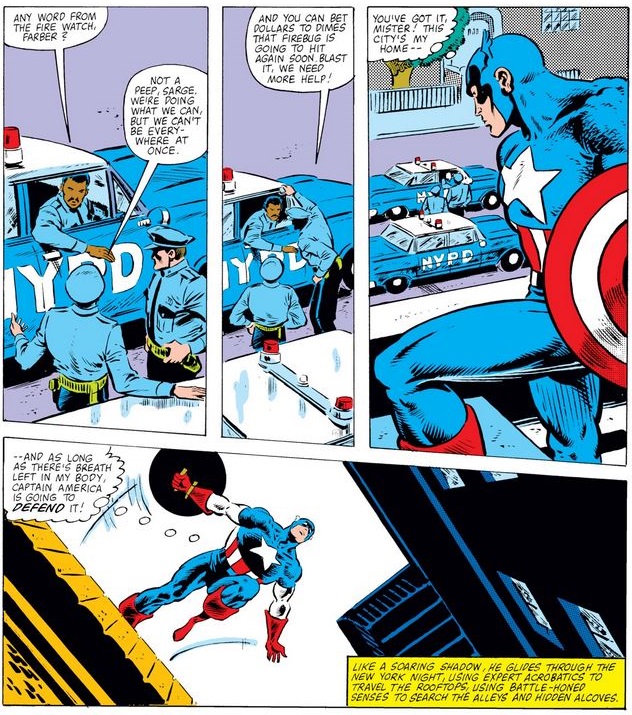 Cap takes a second to admire the Manhattan skyline, until almost Daredevilish sensitivity to his surroundings—or maybe “Cap-sense”—alerts him to… well, you know.

Another burst of flame forces him to an nearby rooftop, where he meets Blockbuster, confessed arsonist.

As Blockbuster unleashes another weapon, Cap lets fly his own, in what has now become a standard play.

Blockbuster literally shakes Cap up before sending him over the side of the building trying to catch his “frisbee.” He’s normally not this worried about losing his shield, but perhaps he realizes that Blockbuster has gotta be caught, he’s gotta be taught, ’cause he’s more evil then anyone here ever thought.

Cap uses distance to his advantage, finding a clever away to strike at Blockbuster. 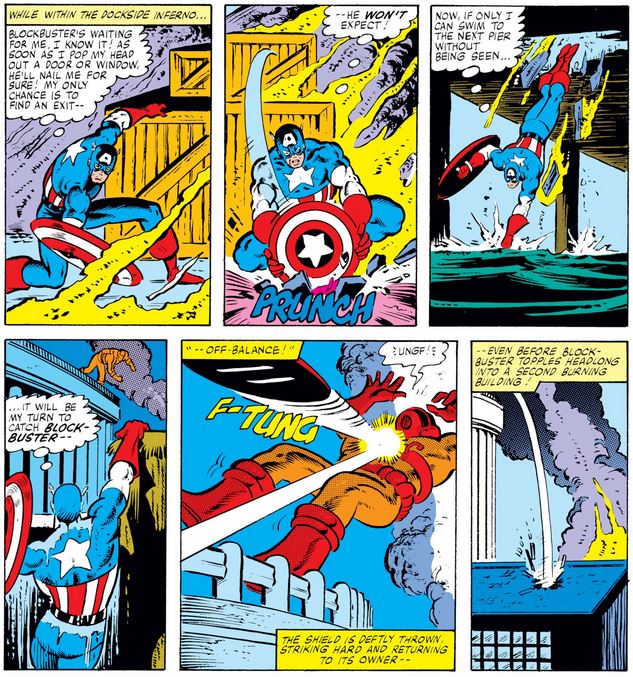 As Cap searches for his foe, he’s once again feeling the effects of the smoke, but he pushes on nonetheless. 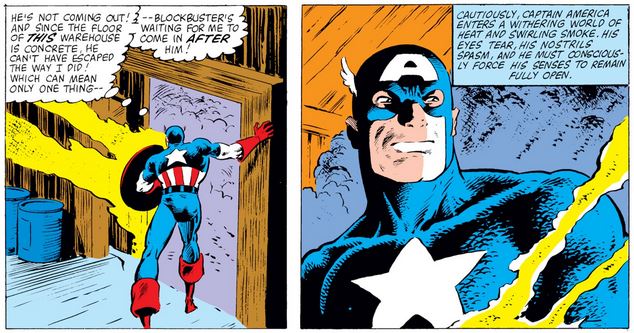 After they battle some more, Cap finds close quarters as effective as distance, especially once he zeroes in on Blockbuster’s point of vulnerability.

(Anyone else get a Batman-versus-Bane vibe from the fight above? Of course you did!)

After Blockbuster is defeated, Cap’s priority turns to getting him out of the blaze alive…

…which he does, and finds himself greeted by firefighters eager to cool him off.

Unfortunately, the man he just saved is the opposite of grateful, and before Cap can spring into action…

…he is saved again by a firefighter, this time his neighbor, Mike Farrell.

Once Mike learns that Blockbuster set his fire that cost Sam Douglas his life, he grabs the arsonist and demands to know why he did it, but a police detective steps in and takes over. As a result, we get a nice short lesson on the pragmatics of the criminal justice system, in which justice for a lesser criminal is sometimes sacrificed to enact justice against a more significant one.

The detective is right: The criminal justice system cannot achieve perfect justice, so it must find some way to try to achieve the “most” justice it can, whatever that might mean. In a utilitarian framework, this is not so hard: Cutting a deal with Blockbuster to help nail his boss leads to a better outcome (“more justice”) than prosecuting Blockbuster to the full extent of the law and letting his boss go. In the retributivist framework implied by Cap’s objection above, however, justice is understood as an ideal that cannot be maximized, so cutting this kind of deal might involve an unacceptable trade-off—even though refusal to cut a deal would imply a failure to see justice done with regard to Blockbuster’s boss. (For more on this topic, see the chapters by Michael Cahill and myself in my edited book on retributivism.)

In the end, we learn as Steve sleeps at his desk that the police succeeded in arresting Blockbuster’s boss, though we never learn the nature of the deal they gave Blockbuster himself.