These two issues of Avengers see Captain America taking charge of the team and very forcefully at that, with questionable reason to do so. At the end, we have new line-up for the team; before that, though, the Avengers appear in Defenders, where Cap is more than happy to defer to a team better suited to deal with what is most likely a supernatural threat.

In Avengers #210, we see what passes for global surveillance in 1981, courtesy of futurist engineer Tony Stark.

Seems a bit melodramatic, Cap… and I’m not the only one who thinks so.

Much to Cap’s relief (look at that smile!), Thor has returned, obviously threatened by someone else exerting supernatural influence on the weather of Midgard. (Will he stick around? Wait and see!)

…with himself and Iron Man, as you see, heading to London, which has been flooded. But see what happens when Cap grabs another flag… talk about a crisis of identity!

As Cap supervises the rescue, he is confronted by a Weatherman—not “the” but “a,” because there is one at each of the five sites.

If you read the issue, you’ll find out who (or what) is behind the Weathermen, how they are defeated by Jocasta and Thor, and where the name Samarobryn comes from. At the end, however, discussion turns to the state of the team, and Cap has some thoughts!

Settle down now, we won’t… in Avengers #211, Cap lays down the law and once again restricts the team to six members, although that definitely would have impaired their performance in the mission against the Weathermen—and even then they only had seven members, plus Jocasta and Thor helping.

Hmm… “lean” and “close-knit” may help the team work better together, but it does not mean “stronger,” much less able to respond to “high stakes” situations (or multiple crises at once). Just compare to Cap and Tony’s conversation in Avengers (vol. 5) #1 (February 2013), by Jonathan Hickman and Jerome Opeña:

For now, though, things are getting smaller. Once again, Cap counsels some rest for the team, while Thor notes how being team leader wears on his old friend.

The team splits up for a while, and Cap goes where he thinks best, keeping his body occupied while he reflects, as Thor did, on his burden of leadership…

…while making a surprisingly bold assertion, one that seems more appropriate in a crisis situation than a roster change with little apparent motivation or justification. (There is a possible explanation for this odd behavior at the end of the issue, though.)

As 4:00 pm—I mean, 1600 hours—rolls around, Cap prepares to address… many more heroes than he had anticipated.

Suddenly the various uninvited heroes start fighting each other, and it doesn’t take long for the Avengers to suspect someone’s behind it… and only Jocasta can see her. 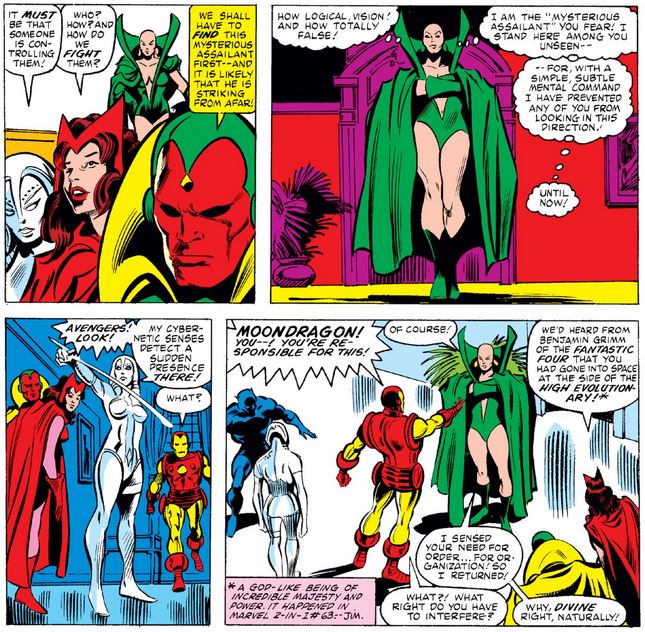 “Need for order,” hmm… and we thought Cap was overreacting before!

The team finally gets down to reorganizing, with Scarlet Witch, Vision, Wonder Man, and the Beast leaving—along with Jocasta, upset at not even being considered for membership (again). Thor and Yellowjacket (Hank Pym) rejoin the team, and Tigra becomes a first-time member. At least the new Avengers had plans for Jocasta…

…and Cap realizes that Moondragon may have manipulated more than the invading horde of heroes, including his ersatz behavior earlier.

And we have the new team:

Before this line-up kicks in, though, let’s go over to Defenders #98, where we can relive the good old days when Beast and Wonder Man were on the team, and Cap calls his doctor for some help. 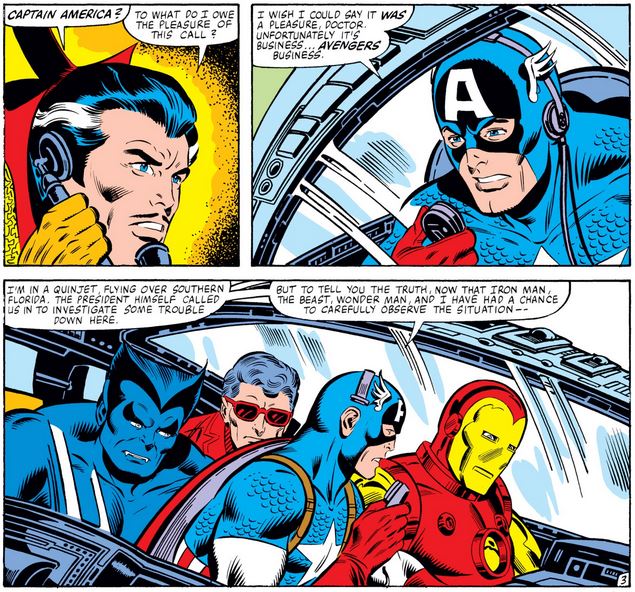 Luckily for Cap and the Avengers, this doctor makes house calls, and takes over the case

Hank’s comment above would suggest he didn’t know Patsy Walker, aka Hellcat, but it was Hank who introduced her to the team in Avengers #141. Oh well… it’s Hank.

Both collected in: Marvel Masterworks: The Avengers Volume Twenty. (Avengers #211 also included in Avengers: I Am an Avenger Vol. 1, which collects issues with significant membership changes.)