This issue leads off a three-issue storyline that welcomes back several old foes as well as one previous identity, as you can see on the cover, although it’s a mystery who’s under the mask. More exciting, at least for me, this issue introduces one of my favorite Captain America writers, J.M. DeMatteis, to the title. DeMatteis writes most of the issues from here on through #300—many of them with the penciller on this story, Mike Zeck, another ones of my faves—and was also generous enough to blurb my book!

The issue opens with a new Rat Pack singing “One for My Baby (And One More for the Road)” in front of a waitress who bears a striking resemblance to a certain Agent 13. 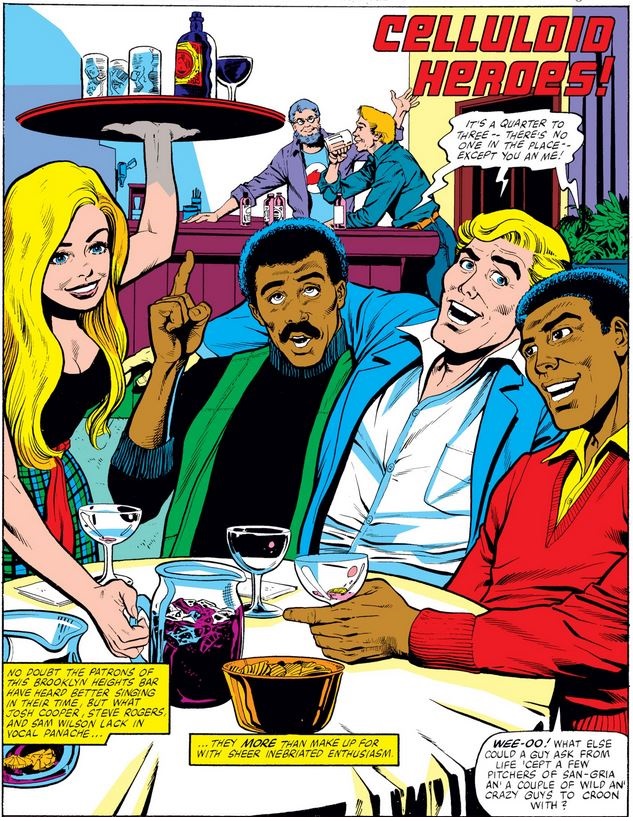 You read correctly: That is indeed Sam Wilson, who almost gives an earful to Steve’s neighbor Josh Cooper (while Steve admits to some dietary indiscretions that are still as wholesome as Mom and apple pie).

After the three friends wobble out of the bar, Steve and Sam notice an assault in progress in a back alley, and decide to put the band back together… but not under the best conditions.

Steve throws a garbage can lid at the other thug and misses, prompting a crack about his thinking he’s Captain America, to which Steve responds (while reflecting on the vice of excessive drinking).

As if Steve and Sam weren’t fully aware of their poor (yet effective) performance, the friendly police officer rubs it in a little.

Sam sleeps it off at Steve’s apartment but is roused by a petulant Beast, calling to remind Steve of a promise he made—and one that, of course, he intends to keep. (And he won’t be arriving alone.)

When Cap and Falcon get to Avengers Mansion, someone is watching them and reporting their movements to an old foe: Lyle Dekker, the Nazi scientist who tried to sabotage the 1940s Captain America serial for the Red Skull. In the modern day, Dekker developed the Ameridroid robot (which looked like a giant Cap), into which he transferred his mind and went on a rampage before being talked down by the real article. (This all happened in issues #218–221.)

Who exactly is calling him “pupil”? Wait and see!

Back at the ranch, Cap is working out with the Beast while Falcon reads a telegram inviting Cap to participate in publicity for a film about his life. Cap has reservations, though, presumably related to how conflicted and immodest it would seem to give his personal endorsement to a commercial film about him. 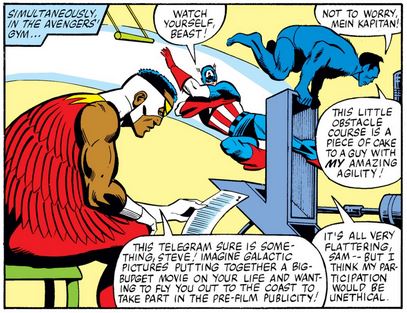 Unfortunately, Cap doesn’t get a chance to elaborate, because Vision slides into the room with some more news which Cap finds much more disturbing.

If you don’t remember from issue #180, Steve Rogers became Nomad after abandoning the Captain America identity in the aftermath of the Secret Empire episode (which culminated in issue #175). Nomad was not seen again after Steve once again took up the Cap mantle again at the end of issue #183… until now.

The appearance of a Nomad in Los Angeles gives Cap an excuse to accept the movie studio’s offer to fly him out there, and he doesn’t so much as step off the plane before he is attacked by the “Nihilist Order,” who are just as quickly confronted by none other than Nomad, who is quite rude… 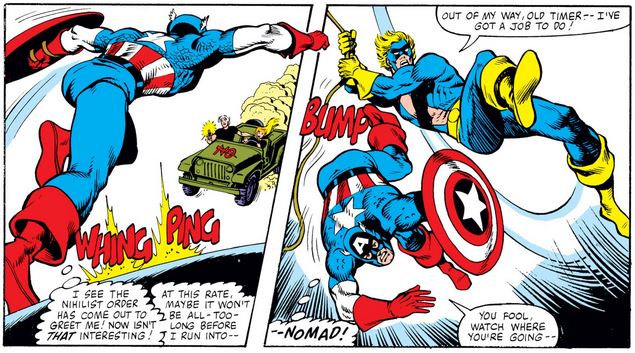 …and, as Cap notes, reckless. 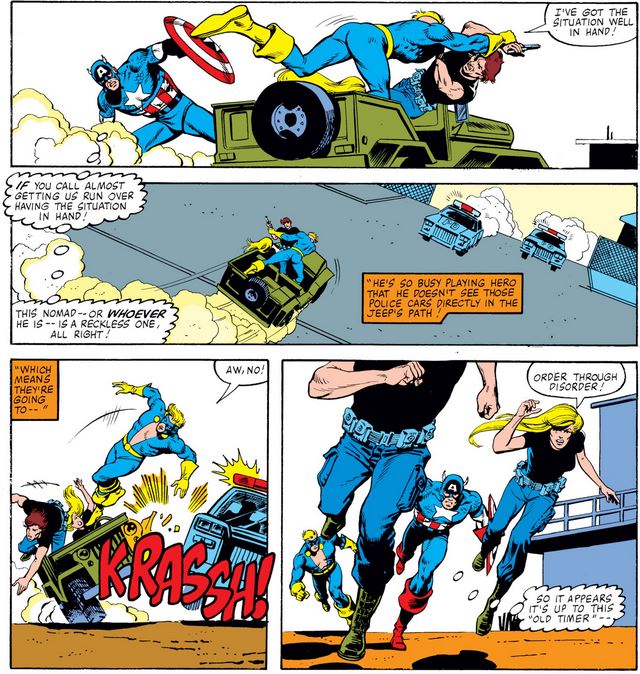 Cap picks up where Nomad left off, despite his advanced age.

Nomad happily soaks up the media attention, while Cap gets a thank you for someone who matters much more him, before he meets someone from the movie studio… someone who does not give Cap the best first impression of modern Hollywood.

Cap’s impression of Hollywood doesn’t get any better once his first publicity event gets underway, although he seems mentally prepared for the worst… 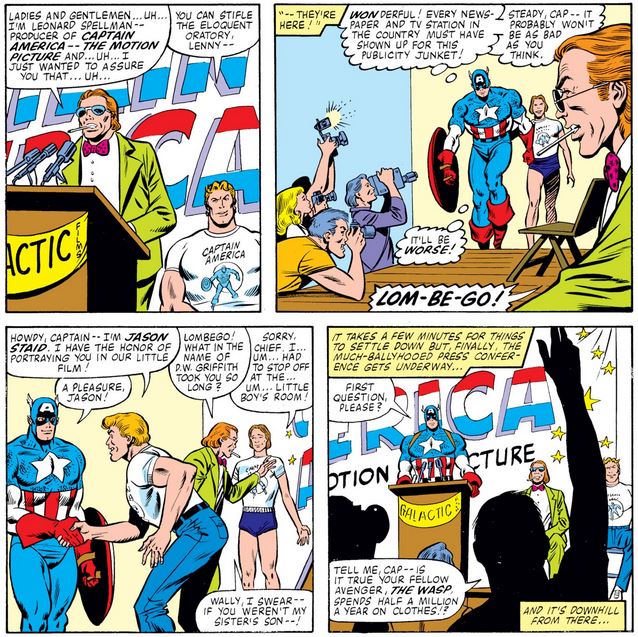 …which actually doesn’t come until after the event, when he gets “that” question. To be fair, it’s probably a question he’s more comfortable answering than one about Janet van Dyne’s wardrobe budget. (Cap’s understanding of the American Dream, as well as his relationship to it, will be significant themes throughout DeMatteis’s run.)

Although the reporter’s question wasn’t unusual, it does stand out in this context, and we soon see why when the same reporter shoots the chief of the movie studio and starts waxing nihilistic. 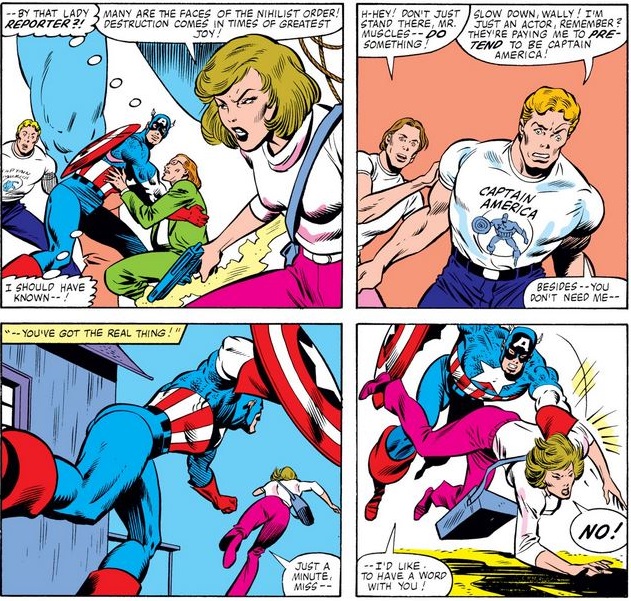 Nonetheless, Cap generously gives her the benefit of the doubt when she seems to break down, which backfires. 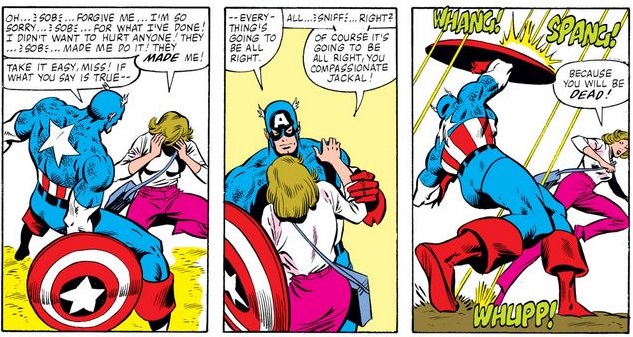 She starts to make her getaway while expressing her amazement at Cap… who continues to impress. 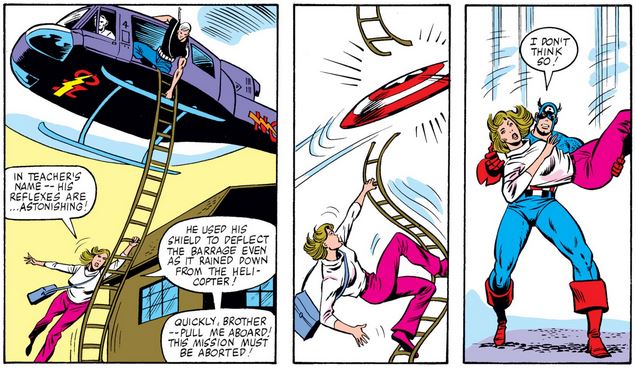 But when his shield “returns,” who should come to the rescue… not that he does any good, other than playing to the press, while Cap turns his attention to the Nihilist Order helicopter.

Nomad tries to help Cap out… or does he? At least he gives Cap a chance to demonstrate his acrobatic skill.

After things settle down, Cap starts to understand some of what Nomad’s really about, though he plays nice until he learns more.

It’s good to see that his gullibility with the reporter/Nihilist Order agent, likely triggered by his old-fashioned chivalrous impulses, doesn’t extend to Nomad… especially once we see who Nomad is working for.

Well, we don’t see yet who “teacher” is, but his attitude toward our hero definitely sounds familiar. Come back next issue to see if your guess is correct, as well as to learn the secret of the new Nomad.