In this issue, we meet Steve Rogers’s new superhero identity, which he doesn’t adopt until halfway through the comic but is spoiled nonetheless on the cover and the splash page. (Sigh.)

Note the language in the exposition below—”the rubble that is politics, 1974″—not far from the language used today. His current disillusionment with politics and the people behind it can be considered his first step in explicitly distinguishing between politics and principle, or the American government and the American dream, which he’ll come to realize fully after his time as Nomad (and about which I wrote a lot in my book). 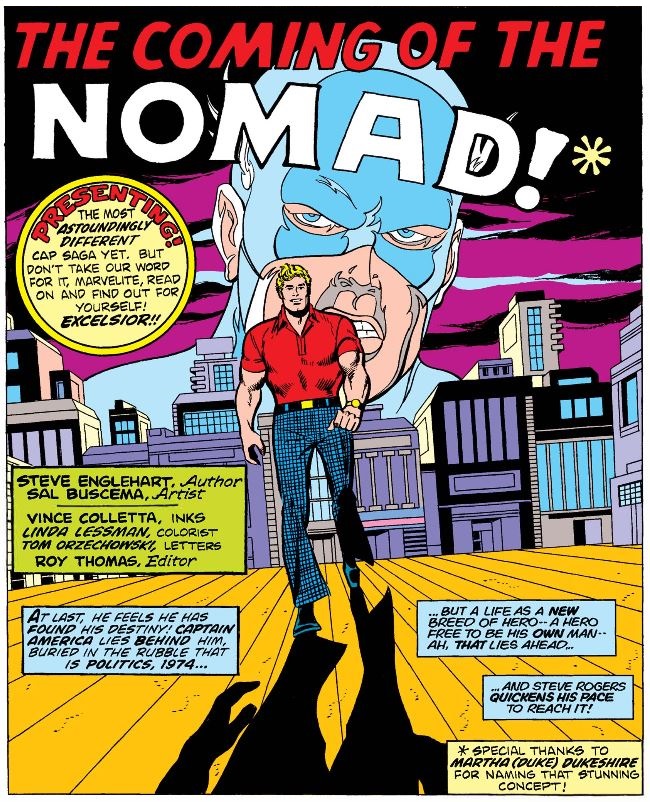 (Martha Dukeshire was writer Steve Englehart’s girlfriend at the time.)

Below we see Steve emphasizing the distinction between politicians’ vision of America, presumably as something to be used for their own ends, and his own, in which America is an end in itself, before remembering the advice he got from Hawkeye and Vision—the latter which I mocked at the time. (Oh well.)

He’ll return to the issue of a name later… first, he has to show up his newfound exuberance, and be called both Aristotle and Robert Redford in the process.

And let’s tie up some loose ends while we’re at it, starting with a call to the NYPD…

…before touching base with someone much less understanding.

I took Steve to task in the last post for the uncharacteristic selfishness of his decision to abandon his responsibility to the American people and dream, but Sharon is not so bound, and has every right to feel betrayed by Steve’s about-face (however much sense it may make for him). From the early days of their romance, the main reason they were kept apart was that they both feel the contrasting pulls of duty and love; Sharon gave up her S.H.I.E.L.D. position to be with Steve, and it seemed Steve had finally done the same for her (especially after she was the sole voice of support for his decision to retire in issue #176). In the final panel above, we see Steve struggling with the same issue of duty and love, a struggle he will deal with for years to come.

Now, about that name… and a new costume! Time for Steve Rogers to break out his long-neglected art skills.

(Another nod to the Distinguished Competition, always nice to see.)

Below we get another nod—one that definitely shows his age—this one to Errol Flynn, the star of the 1935 film Captain Blood and the model for Tony Stark’s original appearance, as you can see to the left (although Flynn didn’t sport his trademark mustache in Captain Blood). 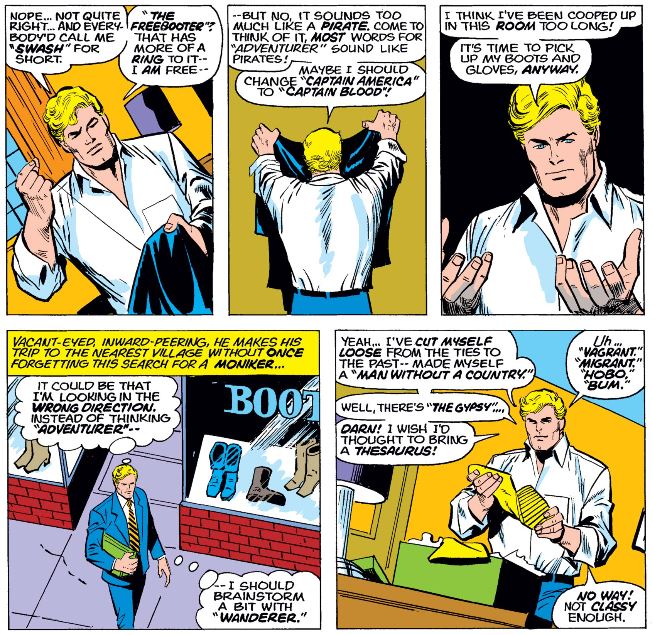 As we see above, he finally hits on the “man with a country” concept—ultimately mistaken, as he’ll realize later—before we makes the most pivotal and dangerous decision yet…

Don’t tell Edna Mode—although she will be vindicated before the end of this issue.

And here we have it… 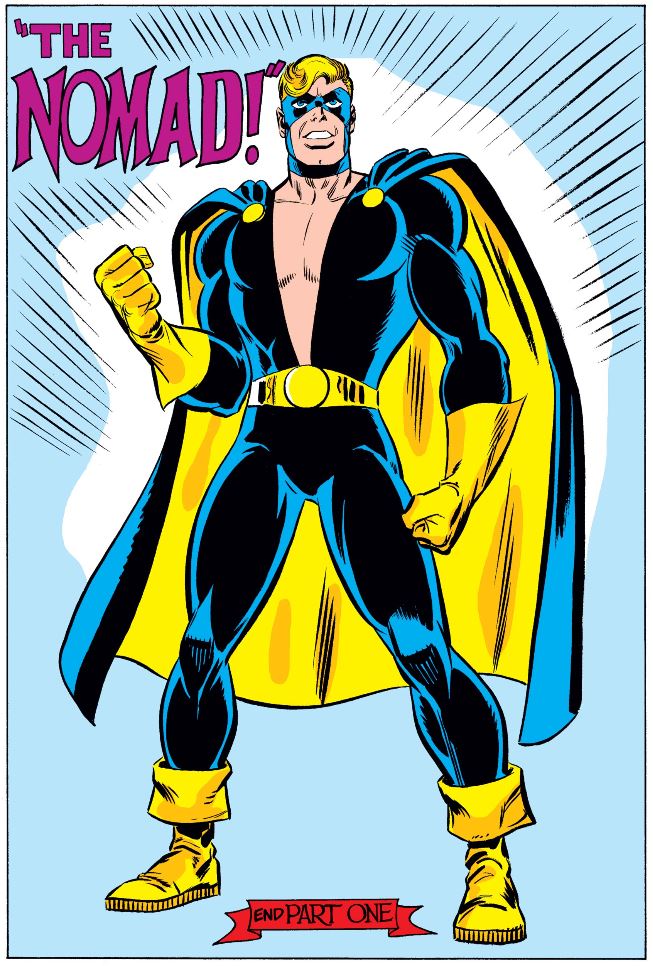 Switching gears a bit, Roscoe (from Steve’s gym) looks for his pal and finds the Falcon instead, and after offending him, proposes that he can do a better job of being Cap than the two guys who loused it up in the last two issues (#178 and #179). 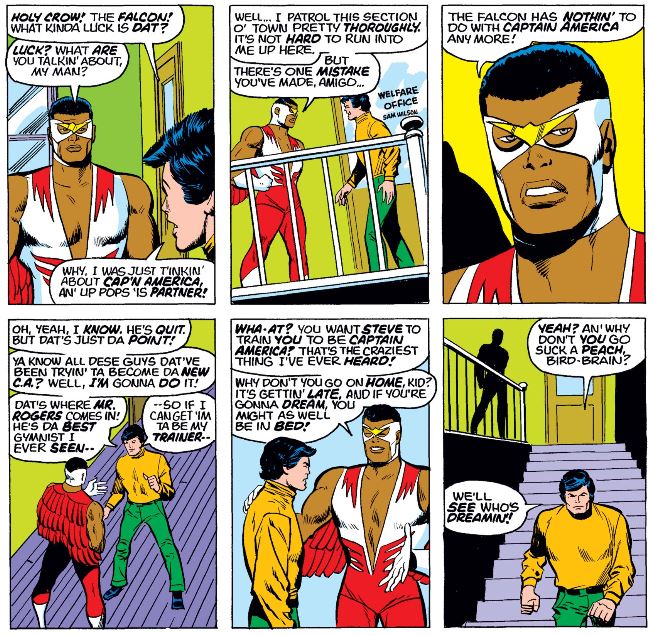 Yes we will, in the issues to come.

Hey, maybe a bat did fly through his window after all… 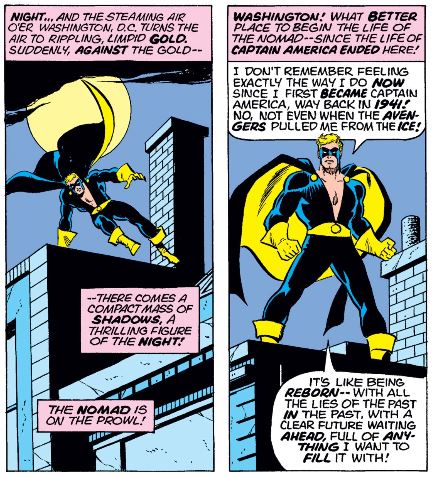 Yes, it’s the first Captain America: Reborn, almost 35 years before the comic of that name. Seriously, though, it’s good to see him reb… renewed and excited to be a costumed hero once again.

And just in time, as Madame Hydra—who appeared to die in Captain America #113 but was actually saved by the Space Phantom, as revealed in the devilishly confusing Avengers #107—is back, now operating under the name Viper after killing the last user of that name (the former advertising exec who started the publicity campaign against Cap), and has now revived the Serpent Squad. Nomad encounters them in a movie theater while a feature about Captain America is showing, and the movie dialogue nicely parallels the action.

It’s unclear whether he wants people to know that this new fella Nomad is Captain America, but he makes it clear below.

The last panel above nicely shows that whatever the name and the colors, Steve Rogers’s goal is the same.

As the fight wraps up, Edna gets her revenge.

Steve is determined to forge on, and so he swears… which gets an editorial comment that emphasizes that swearing a promise or oath is not something that Captain America, sworn protector of the American dream, does lightly.

In the next post, Steve talks to Abraham Lincoln and his old pal Namor—guess who is more pleasant—and even checks in with the Avengers.