These two issues of Captain America—and one page from Avengers #131—show Steve Rogers adapting to his newly chosen role as Nomad, “Man without a Country” as the storyline with Viper and the new Serpent Squad continues, young Roscoe steps into some very big shoes, and a major foe returns.

Oddly, the opening splash page to issue #181 leads with my friends’ nickname for me before a lengthy quote from President Abraham Lincoln, in an homage (intentional or not) to Mr. Smith Goes to Washington.

Wise words, as important today as they were in Lincoln’s day, and very indicative of Steve Rogers’ predicament, feeling dedicated to the founding principles of his country as the same time he feels separated from its current government.

His reverie continues as an old “friend” appears…

No one knows except the people in the movie theater fight in the last issue, that is… but no matter. More important is Krang, a longtime rival of Namor, who has joined with Viper’s Serpent Squad and has brought them the “seven-headed Serpent Crown of lost Lemuria,” a weapon of great power that goes on to appear in many Marvel titles, including Avengers (beginning with issue #141).

Namor and Nomad—I think David Letterman could have fun with that—do battle, of course, and Steve lets slip who he really is. 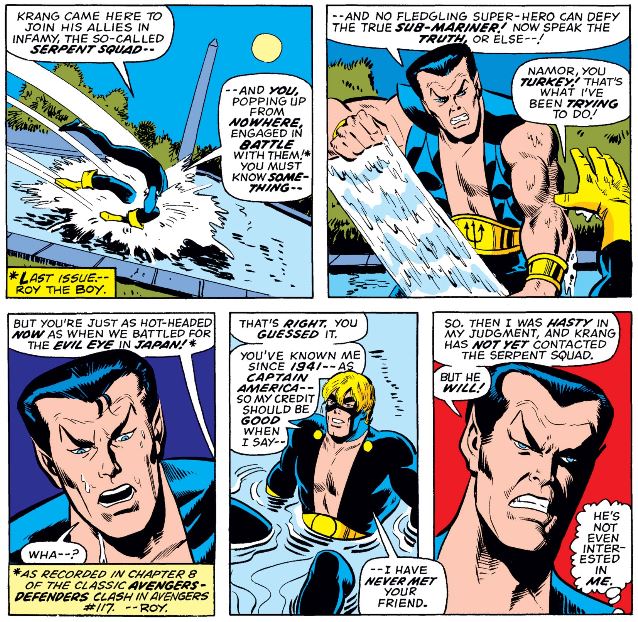 Actually, Namor didn’t guess it, and Krang has contacted the Serpent Squad (as of the last page of the last issue), but otherwise accurate.

After Nomad and Namor chat—with the latter decidedly uninterested in the former’s identity issues—we see Nomad try to call S.H.I.E.L.D., amidst all the drama between them.

(Yes, those “Secret Empire things” have a tendency to do that.)

Nomad and Namor leave to find Krang, who has kidnapped the president of Roxxon Oil, so we turn to the Falcon and… a new Captain America?

Roscoe shows Sam he has skills…

Before Sam has a chance to talk to Roscoe more, someone with a definite interest in the return of Captain America shows up.

Happily for her, Peggy recognizes immediately that it’s not her Cap. (And Sam recognizes a certain “connection” between Gabe and Peggy, wink wink, nudge nudge.)

Nomad and Namor find Krang, Viper, and the rest of the crew at a Roxxon drilling rig near Atlantis, and fight until a helicopter full of Roxxon security show up, causing Viper to flee with the Serpent Crown and leaving Krang to fall to Nomad. And the security personnel and Nomad do not exactly hit it off. 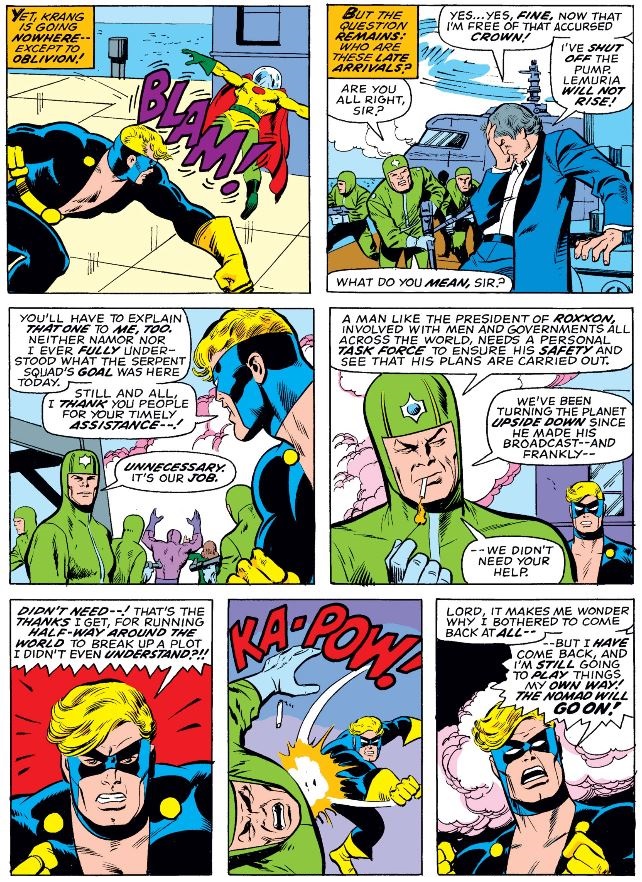 This may be another example of Steve’s quick temper and lack of self-restraint as Nomad compared to Cap that we saw earlier, but it still seems odd… especially in light of his encounter with his old colleagues in Avengers #131, where he reports that his first outing as Nomad went swimmingly! 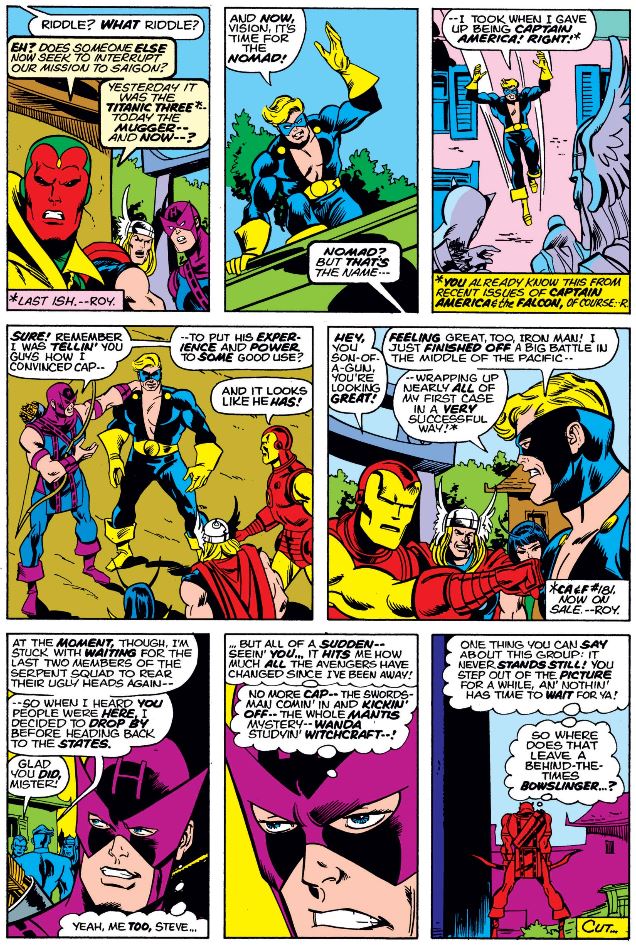 (This page also serves as a tidy follow-up to Captain America #179, when Hawkeye convinced Steve to take up costumed adventuring again, only to raise doubts himself about his own future with the Avengers.)

Steve does hear of a sighting of Viper and the Cobra, so back in Captain America #182, he joins a police siege, but finds the officers less than cooperative… especially because they don’t know him from Adam. (That may also be due to the vigorous pencils of Frank Robbins, which are quite different from the more elegant Sal Buscema work we’ve grown used to.) 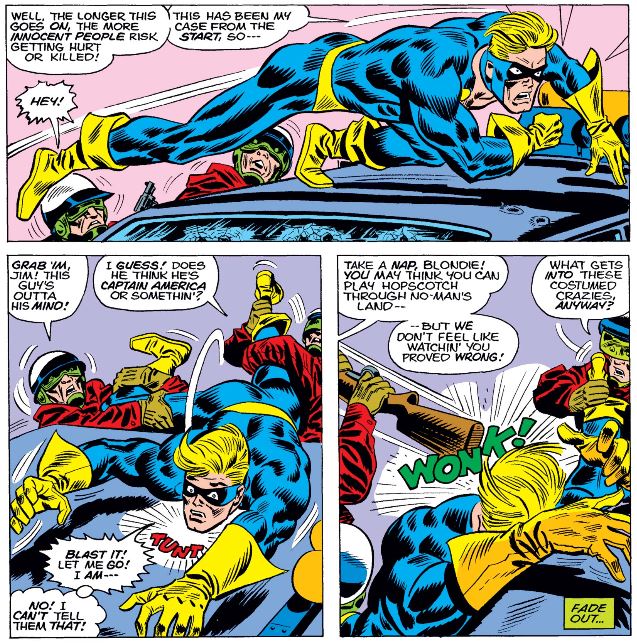 When he does come to, it’s only to see the officers massacred.

Contrary to the exposition that opens the first panel below, I see in Steve’s reaction the face of a hero who regrets not being to help, and slowly realizing that being an unknown hero doesn’t carry the same cache or level of trust as Captain America did (even after the recent injury to his reputation).

Also below, we find Sharon back at the Carter mansion, where she came in the last issue hoping to find Steve, only to suspect that he’d left to take up costumed adventuring again. Here, we see her suspicions confirmed, and her hopes for a more permanent romantic arrangement with him dashed.

And then… enter Dave Cox, the pacifist who so rankled her sister Peggy in issue #163. 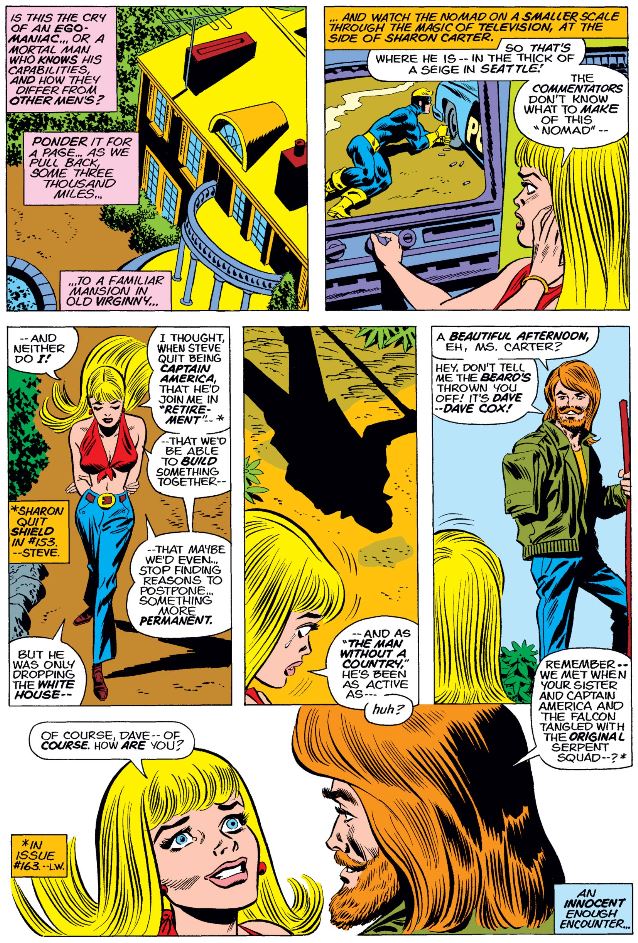 Meanwhile, Nomad reminds himself of his mission to save lives and frees himself from where the police cuffed him (and practices some uniquely Robbinsesque moves).

Did he bounce on his back?

After he finds Viper and Cobra, the battle starts anew, with Nomad fighting them while trying to find them for the fire set by the authorities. (If I didn’t know better, I’d think that Cobra is confusing Nomad for a certain spider-themed hero—no, not that one.) 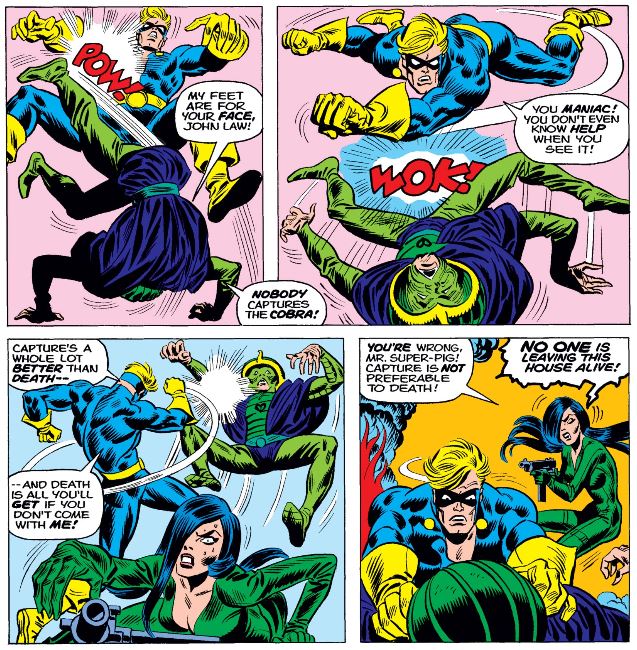 Below, Viper explains why she prefers to die for her cause than be captured, and it’s all too familiar from the terrorist handbook. (Cobra, to his credit, does not agree.) 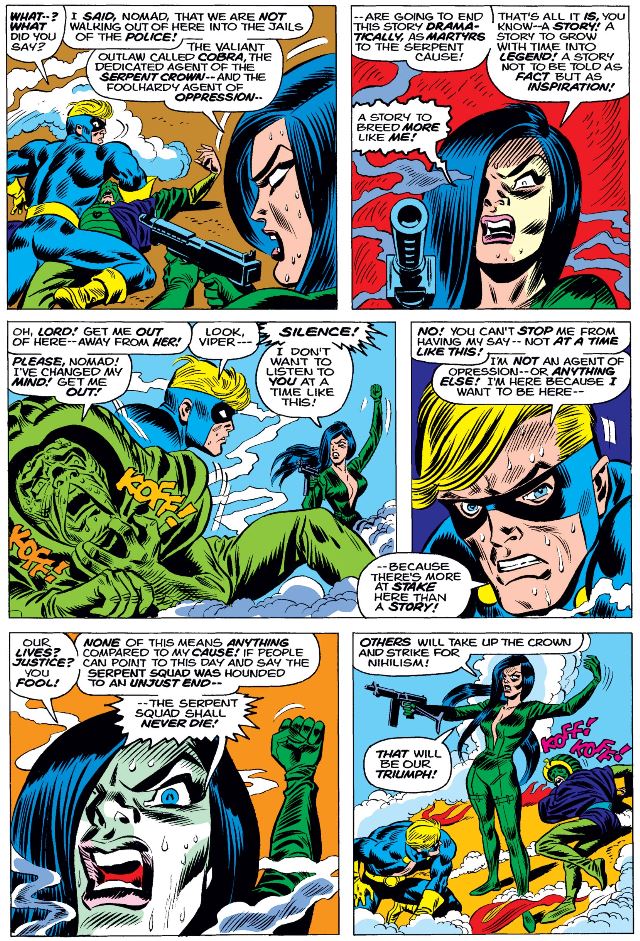 So her great cause, worth dying for and inspiring others to follow in her path, is nihilism, which holds there is no value to anything… hmm. (I guess one could believe there is value to nihilism itself, but that position wouldn’t be very nihilistic.)

Eventually the house collapses, and Nomad is propelled outside by the water from a firefighter’s hose, and wonders if this actually plays into Viper’s plans

Time to check on Lil’ Cap (revealed here to be from Brooklyn, just like his more experienced and illustrious predecessor). 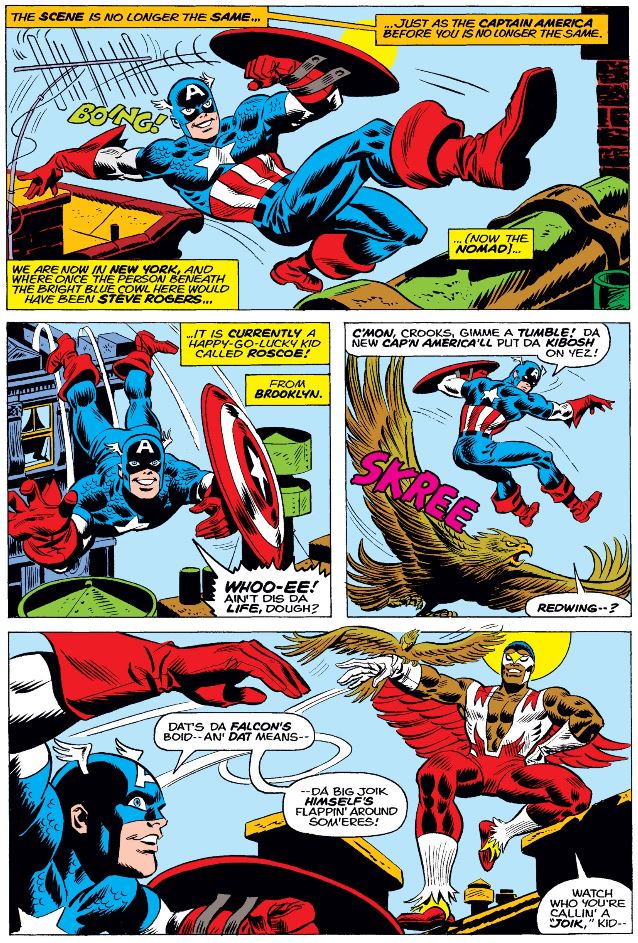 Now look who’s comparing himself to the Caped Crusader (as Steve did in the last issue).

And just as most Robins, early in their careers, encounter Two-Face, Roscoe meets an A-list foe all too soon.

As they say, that escalated quickly!