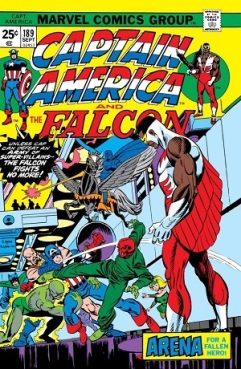 This post covers the first three of the six issues of Captain America between Steve Englehart’s run, which began in issue #153, and Jack Kirby’s heralded return to the title with issue #193. Most of them pick up on threads from the end of Englehart’s run, particularly the fate of Sam Wilson, revealed by the Red Skull in issue #186 to have been “Snap” Wilson, a mob-connected criminal.

Before we start into those, though, we have a single panel from Avengers #137 in which Cap responds to a gentle inquiry into his participation with the group (with Hawkeye referencing their brief encounter with him as Nomad), and in the process reports on the mess his own life is at this point.

It’s difficult to place this panel precisely in the chronology here, but oh well—I’ve never been  a stickler about that. He seems to imply the ordeal with the Skull from the last few issues is still ongoing, but I don’t know when he would have had a chance to chat with Clint during that mess. (Cap will return to the group fulltime in Avengers #141, where the Serpent Crown storyline from Captain America #182 resumes.)

In Captain America #187—the first of two issues written by John Warner, who also co-wrote issue #186 with Englehart—Cap, Peggy Carter, and Gabe Jones are still reeling from the revelations about Sam, who remains comatose after the Skull relinquished mental control of him and fled.

Before long, Cap is drawn by a tractor beam into a mysterious flying egg, which drops him in a hole, giving him a chance to make one of his famous literary allusions. 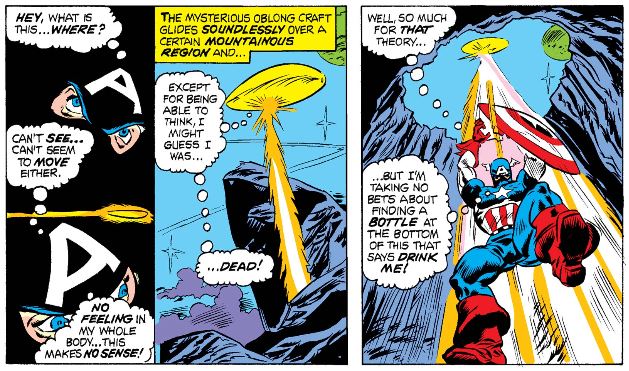 Nearly this entire issue is taken up with Cap trying to find his way through a maze full of various threats, including the robots below. The entire experience, coming at a rather bad time for him (and Sam), tests his patience and brings out the anger that plagued him during the entire Secret Empire/Nomad period (and from which the Red Skull did not give him much chance to recover). 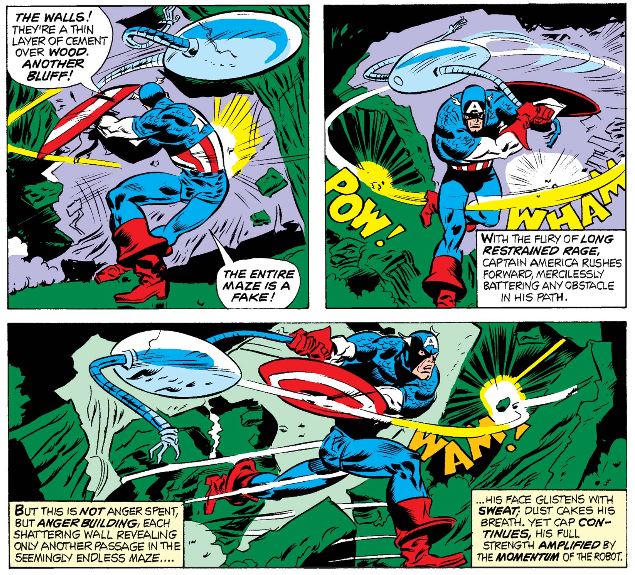 In case we didn’t get the point, we’re told that… 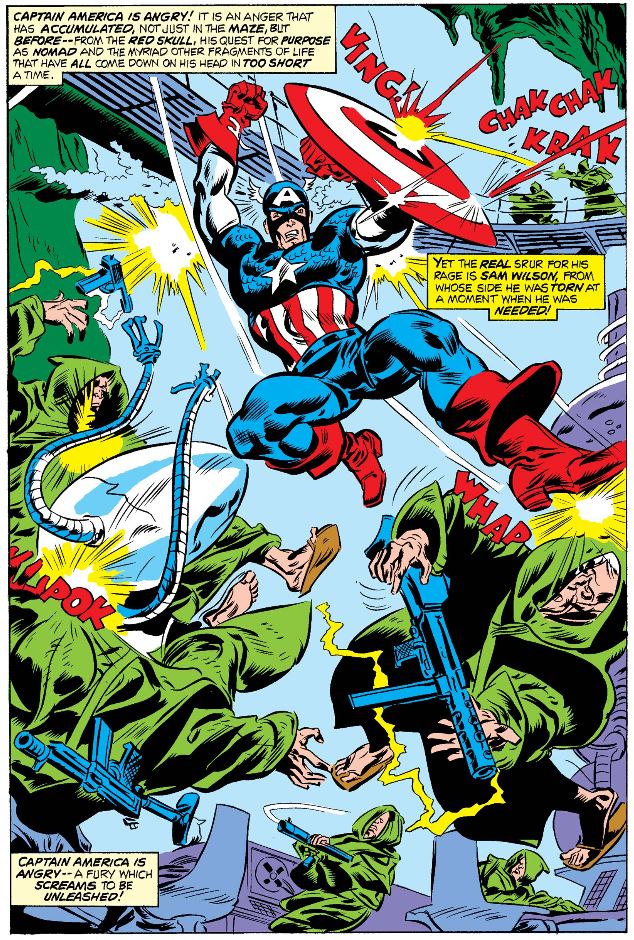 As we’ve seen before, for better or worse, Cap finds that fighting an obvious foe is therapeutic, allowing him to work out frustrations in a “socially acceptable” way and relieve his mind from having to struggle with the moral dilemmas he faces all too often.

It turns out that the mastermind behind all of this is the Druid, a old enemy of S.H.I.E.L.D., who unleashes his pet science project, the Alchemoid, who fights Cap through the first half of issue #188 until the Druid inadvertently makes his own creation explode (and then blames him for it).

Cap, of course, mourns his foe’s death more than the Druid does, and self-consciously lets raw vengeance take the place of his usual noble motivations (which could be considered another manifestation of his short fuse, highlighted in issue #187, if only it weren’t so deliberate). 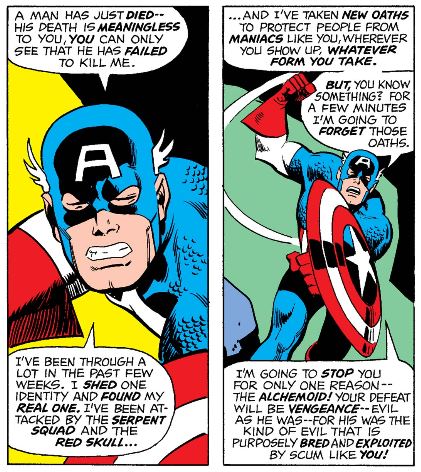 Below this anger is referenced again, augmented by the fact that his foes all too often escape justice (or vengeance).

Unfortunately, even though Cap defeats the Druid… he gets away.

S.H.I.E.L.D. shows up, (almost) just in the nick of time. (Sorry.) Cap is a bit snappish with Eric Koenig but backs up quickly once he realizes it, and openly admits to his mental state of late… not to excuse his behavior but to explain it. Also, he states his number one priority: getting back to Sam, who is recovering in a secret S.H.I.E.L.D. facility.

In issue #189, scripted by new regular writer Tony Isabella—at least for three issues, before Kirby is due to return—we learn that a secret S.H.I.E.L.D. facility may not be the best place to recover… especially for Sam Wilson. (I include the text box at the top of the opening splash because the exposition craftily follows from it and summarizes both Cap’s recent adventures and their contribution to his frustration of late.)

We now return to our regularly scheduled program, already in progress: General S.H.I.E.L.D. Hospital, with a shock ending you had no reason to expect. 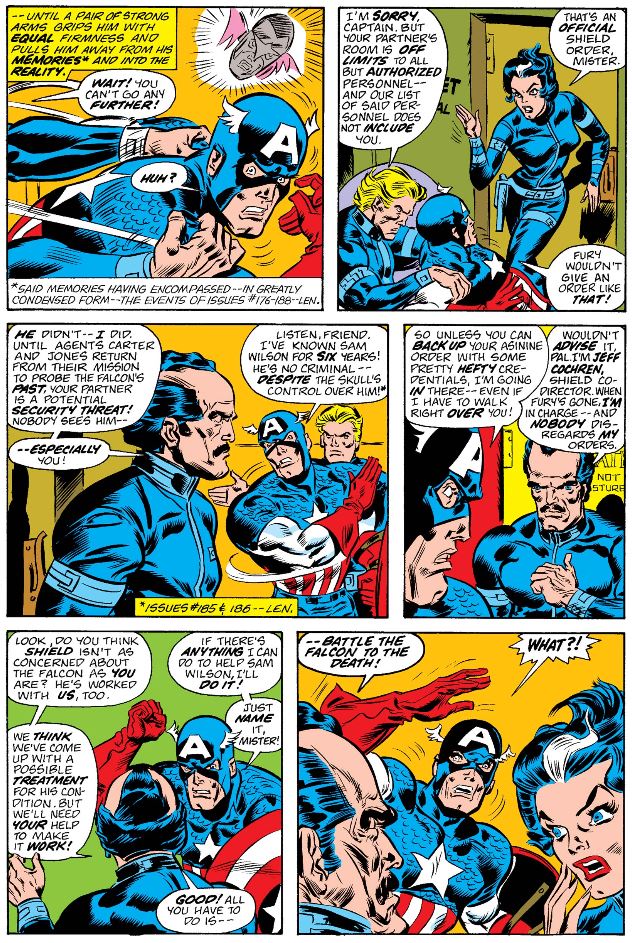 I didn’t think that treatment is indicated, but to be fair, I’m not a medical doctor. (Plus, it’s probably not covered by most insurance plans.)

Cap is little too trusting, even though Sam is effectively a zombie (and Jeff Cochren, the S.H.I.E.L.D. agent in charge, is obviously a couple cans short of a six-pack). 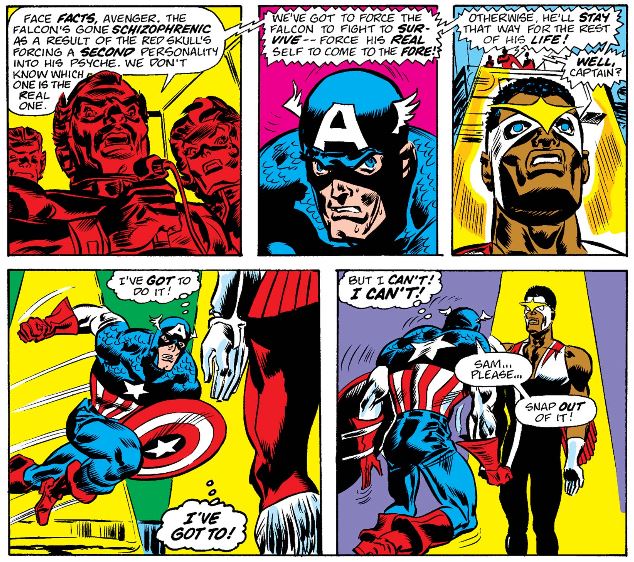 As least Cap realizes fairly quickly that he can’t do it, until Cochren starts manipulating him into thinking Sam is actually one of his foes, starting with the Red Skull—but even as Cap realizes what’s going on, he can’t stop fighting.

Eventually, while the other S.H.I.E.L.D. agents fight back against Cochren, Sam comes to and starts fighting back against Cap, who seems to be free of the illusions that Sam was a foe.

Not so fast, Cap… Sam’s not exactly the Falcon you knew. Cap is forced to run a play familiar with many encounters with brainwashed allies (usually named Bucky). 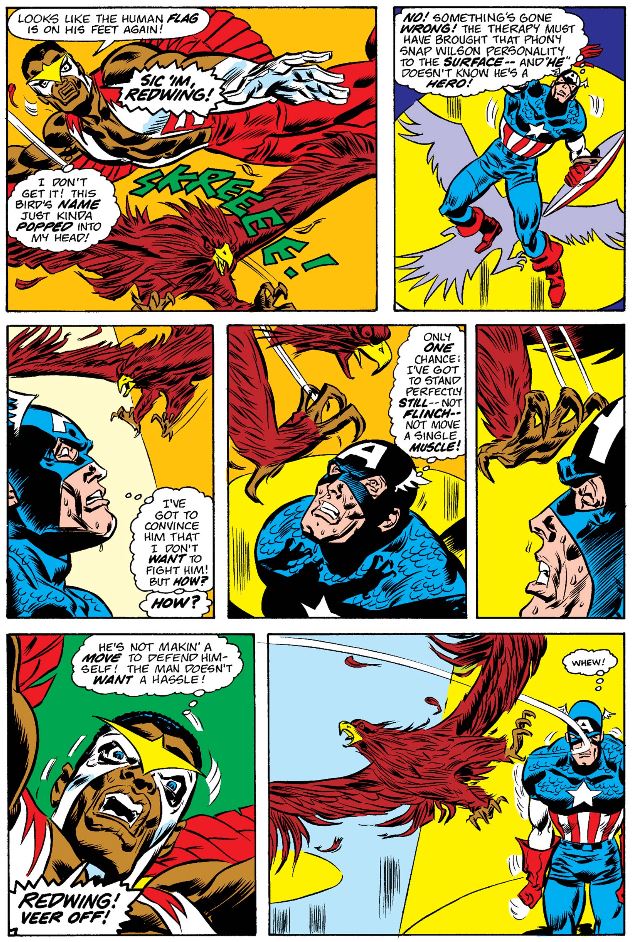 Cap fills Sam… I mean Snap… in on recent history, and despite his criminal past, offers to help him become the hero Cap knew as Sam.

On the final two-page spread (a rarity in itself in this period), we discover the true puppetmaster behind this entire exercise…

Remember her, from issue #164? We’ll see much more of her in the next issue and post.

Collected in: Avengers: The Coming of the Beast, Marvel Masterworks: Avengers Volume Fifteen