This issue is a prelude of sorts to a tale that sees Captain America and the Falcon facing the Yellow Claw, a villain from the 1950s who makes an appearance here after being pursued by Nick Fury and S.H.I.E.L.D. in the pages of Strange Tales. But first, we introduce a new villain to the Marvel Universe, and Sam beats Cap to the honor of becoming a werewolf!

The issue starts with the issue’s villain—whom we’ll meet soon—training monsters to hunt a decoy Cap, which is contrasted with the genuine article, who is (uncharacteristically) having a very good day with his pal.

Mel is a childhood friend of Sam’s who wrote from prison asking for his help. When they arrive at the prison, Cap finds the cowl worn by his unfortunate double, and then discovers what killed him. 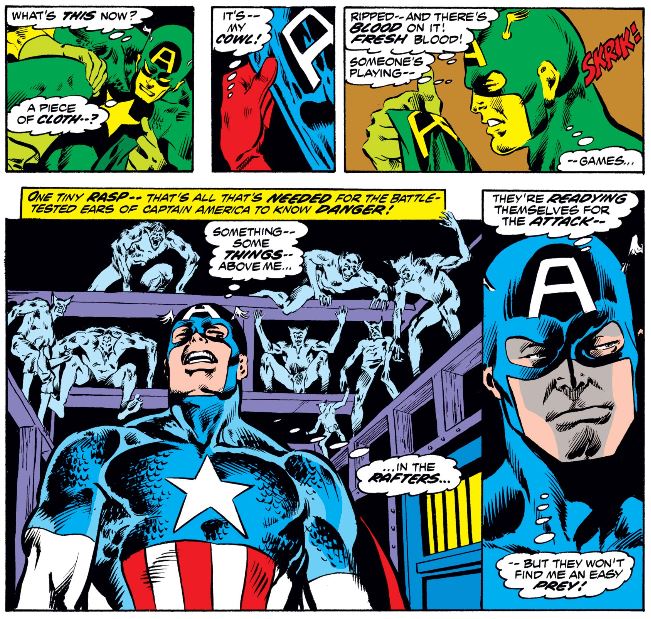 Very confident Cap is when he’s in a good mood, as we see both above and below.

Below we get some overwrought exposition that describes Cap as a brawler above all else—a distinctly different portrayal than the norm, and even odder for the fact that he’s (apparently) in a very good place emotionally. 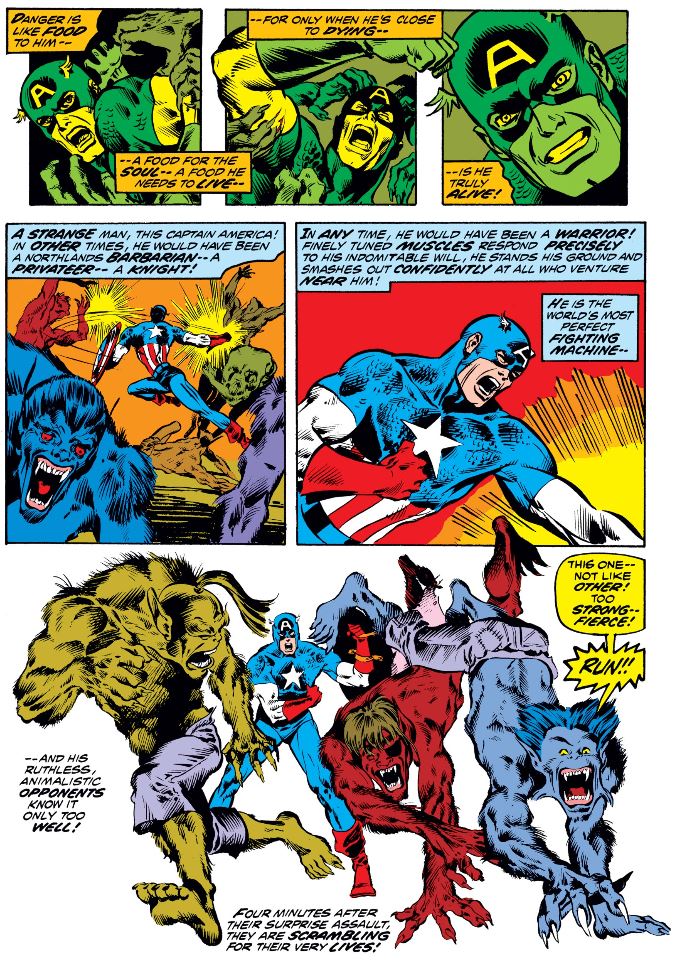 Of course, he’s not just a brawler, as the panels below remind us.

This is an auspicious debut for Nightshade (Tilda Johnson, who also goes by Deadly Nightshade), who goes on to be involved in various corners of the Marvel Universe, mostly recently in the excellent Nighthawk series. (A version of the character also appeared in season 2 of the Netflix series Luke Cage.)

Unfortunately, Nightshade had already captured the Falcon and transformed him into one of her werewolf thugs. This is many years before Steve Rogers’ own walk on the wild side as Capwolf. (That’s right, friends… Capwolf.) But for now, we have Falcon-Wolf.

A giant werewolf even, wow.

And yes, we get yet another “Cap fights mind-controlled Sam” story. At least Cap gets a chance to use his judo, which makes a comeback after being largely forgotten since the early days of his Tales of Suspense run. (No use giving lessons this time, though.) 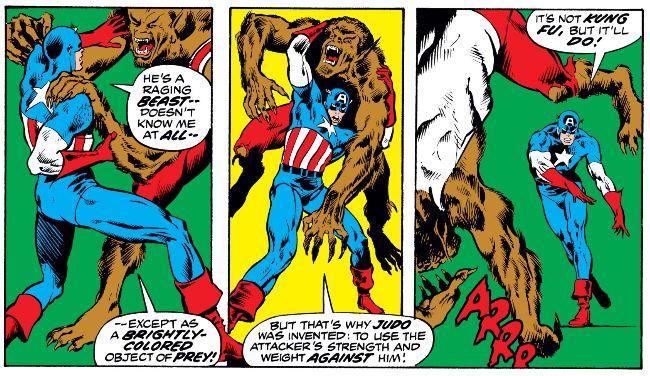 You thought I made up the name Falcon-Wolf? Alas, I’m not that clever.

Cap’s new super-strength seems to fail him below, so he uses Sam’s newfound strength to find a way out.

A slight diversion to introduce the true villain in this scenario, who was merely funding Nightshade’s werewolf experiments.

(More on the Yellow Claw in the next post when his story starts in earnest.)

Back to Cap and Hairy Sam, with Cap displaying a rather balletic fighting style in the first shot. 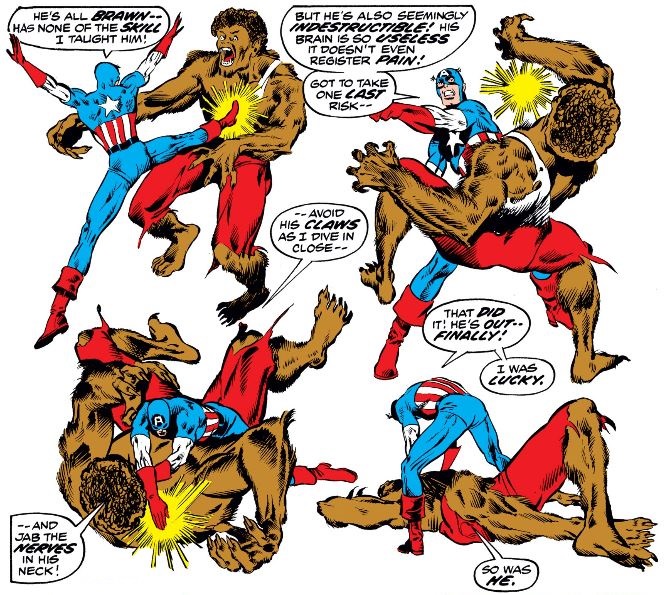 Although he doesn’t say it outright, we can assume that one of Cap’s concerns was subduing Sam without hurting him unnecessarily, aqt which it seems he succeeded above.

Nightshade flees from the Yellow Claw, leaping off a tower of the prison and leading all her were-lemmings after her… forcing Cap to try to restrain Sam as well while displaying his incredible stamina and perseverance.

Sam reverts to normal, and the story is brought full circle by the revelation about his friend Mel. 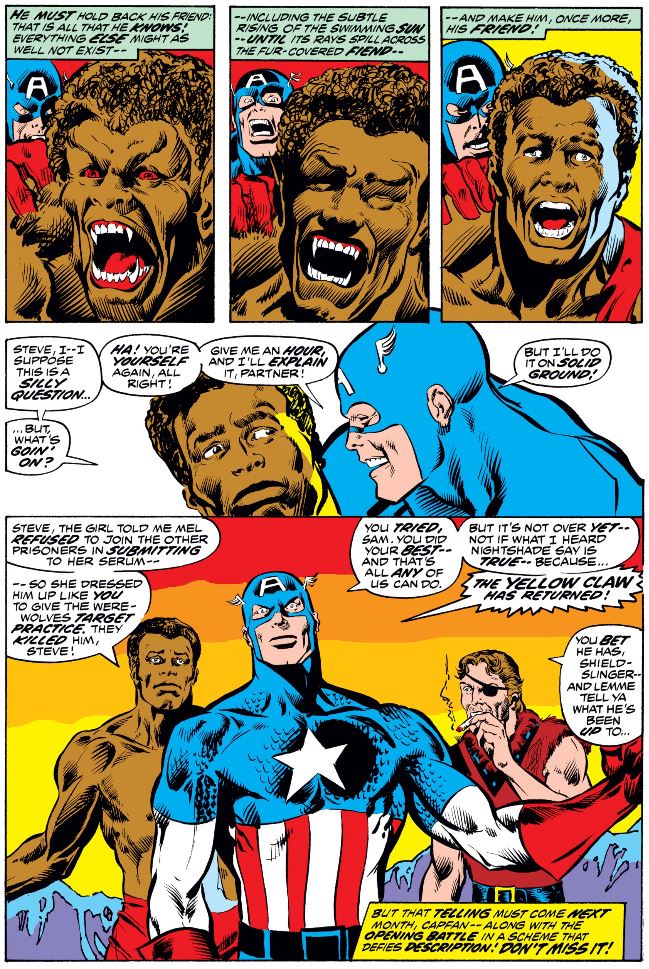 Who is that? Why it’s Nick Fury, dressed as a furry pirate to find the Yellow Claw, of course. (Don’t ask me why, but someone must have given him a mirror, because next issue he’s back in his standard issue S.H.I.E.L.D. outfit all of a sudden).