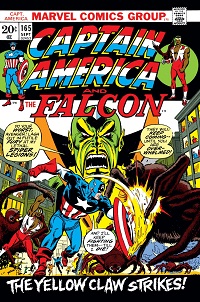 After the prelude in issue #164, we have here the main three-parter featuring Captain America and the Falcon fighting the Yellow Claw, a Fu Manchu-type villain (see also: the Mandarin) who starred in his own short-lived Atlas comic in the 1950s, who reappeared in the 1960s to fight S.H.I.E.L.D. (including behind the scenes in Strange Tales #159-162, featuring Cap), and whom writer Steve Englehart now tries to free from his racist trappings (as many other writers and artists have tried to do with the Mandarin as well).

If the focus of this story weren’t clear, enough, the splash page makes sure we know… and Cap makes sure Fury know that no man is left behind when he and Sam are involved.

And in case he wasn’t clear, he drives his point home, foreshadowing his line from the film Captain America: Civil War about not being able to stand by when things “go south.” 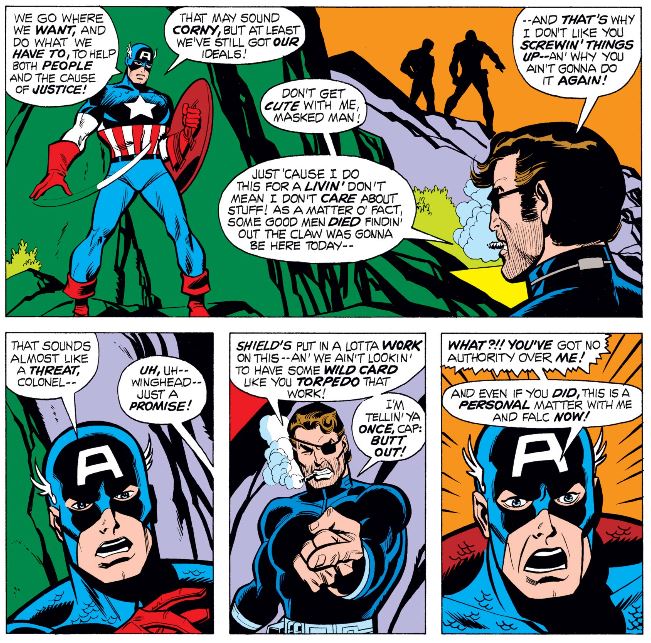 To be fair to Nick, this is a valid issue only occasionally addressed in superhero comics: the hero interfering with a police or military sting operation that may have been months or years in the planning. Better communication is key, of course, but given the quasi-official (at best) status of most superheroes, you’d think this would be a greater problem that is usually shown. (This should not be as much of a problem for Cap, though, if only he and Nick could work together better than they do!)

Cap decides to go after the Claw himself, but it looks like he will go it alone. 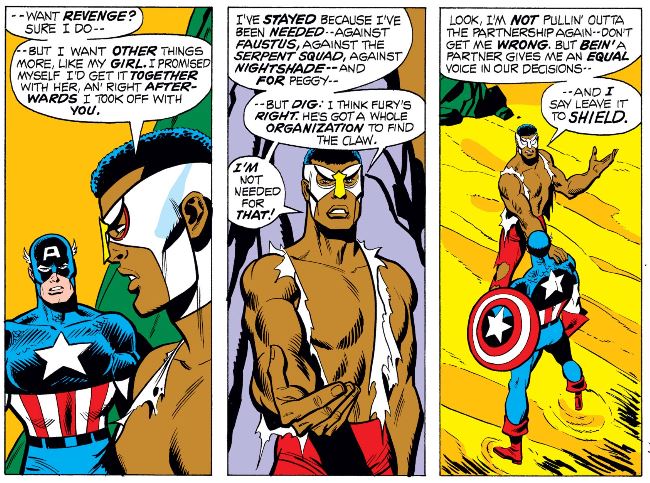 Here we see Sam confronting several conflicting priorities, using judgment to make a difficult choice among them, and defending it with sound reasoning—most importantly, deciding that his talents and energies are better used elsewhere (in both his superhero and private lives), especially given the resources of S.H.I.E.L.D. (that Cap apparently dismisses).

Cap sympathizes, but Nick has to twist the knife a bit, after which Cap asserts his independence (as well as his perpetual solitude).

After an interlude showing the Yellow Claw exerting his mind control powers over some uncooperative Chinese military personnel, we see Cap return to Virginia and the sisters Carter, confronting his own complicated situation there (and getting a little snippy with Sharon). 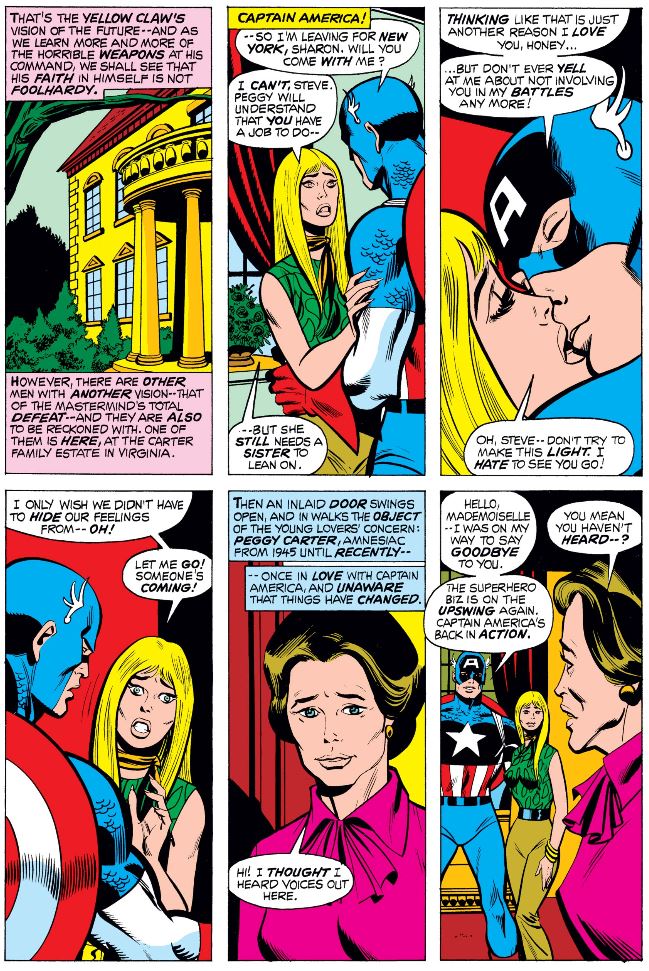 In case we’ve forgotten, Peggy reminds us of the PR campaign against Cap, orchestrated by the members of the Serpent Squad (as we saw in issue #163), which leads into the “Secret Empire” storyline that begins in issue #169. And to make things worse… they have a jingle!

Oh Cap… just wait. But in the meantime, how about some giant tarantulas? You can use this opportunity to assert your value (which must have been on your mind after the talk with Peg and Sharon).

The exposition below… hmm. Let’s see: “not without” means “with,” but if it was washed away, than it’s “without,” but… Oh never mind, the spiders burst like tomatoes!

At least the page ended with Cap giving thanks to the police who gave him a hand.

On the Yellow Claw’s signal, the spiders flee into the sewers, and Cap follows, all too aware of the Claw’s plans. And again, we get an affirmation of his role as a symbol, with the added acknowledgment of the effect of that role on his actions.

Of course, in issue #166, we learn that Nick is not actually dead, and Cap explains why, stressing that his new super-strength requires him to use even more restraint than usual, even when he thinks he’s fighting an armored man.

Speaking of Cap’s super-strength, editor Roy Thomas explained and defended it in the letter column to issue #165:

Back in issue #166, despite his defiant words to the Claw, Cap still feels guilt over almost killing Nick, as we see below, even confronting the Contessa’s accusations with silent sympathy.

When Cap gets home to the lovely Corinth Hotel, he discovers it is no longer his home… and he sees evidence of what Peggy warned him about (albeit not the aforementioned jingle). 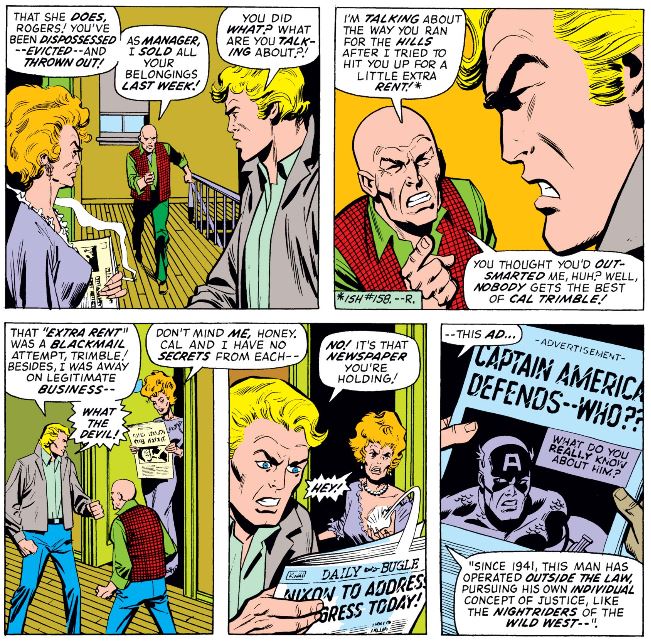 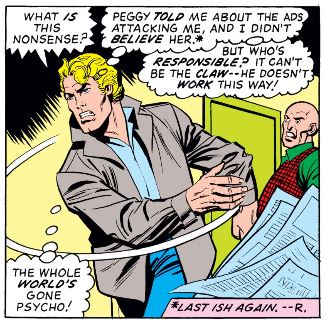 Well yeah. (Again, there will be much more of this starting in a couple issues.)

In a stark contrast to his wonderful mood at the beginning of issue #164, we find Cap back in his traditional doldrums… and that’s before he talks to Sharon. 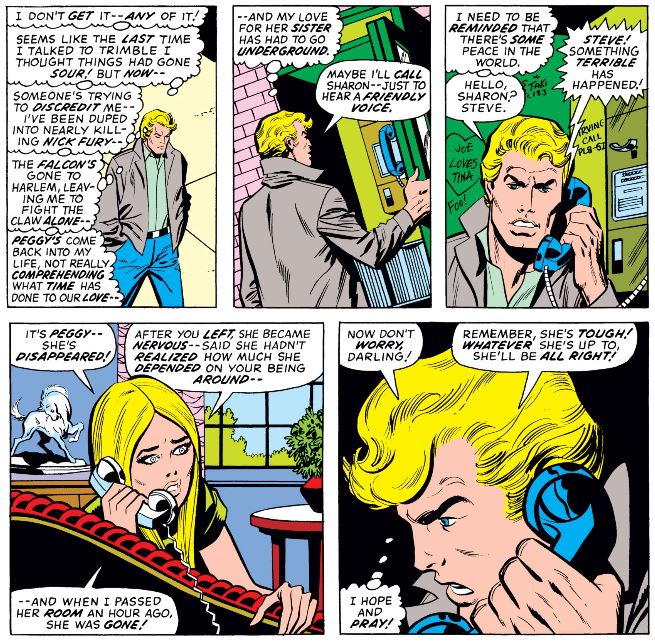 Don’t worry, Cap… she’ll come to you. Or, as close as she knows to get. 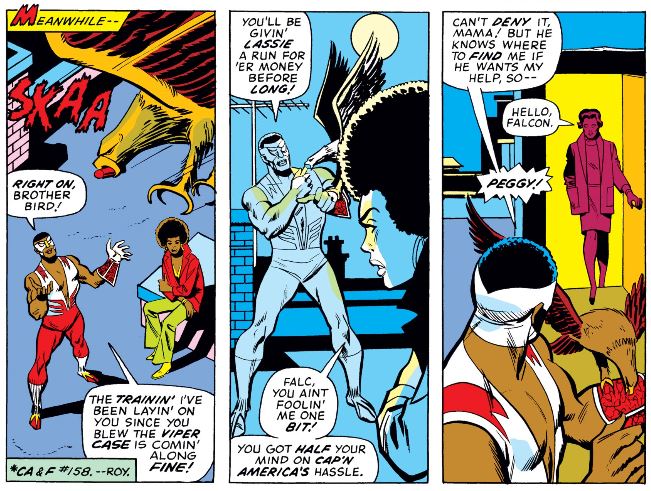 Sam assures Cap she’s OK, and also gives his friend a place to stay, when they hear news of yet another visitor to the Big Apple.

Sam agrees to join Cap again, and soon they’re fighting mummies, after which Sam has the audacity to cast aspersions on a hallowed American institution. 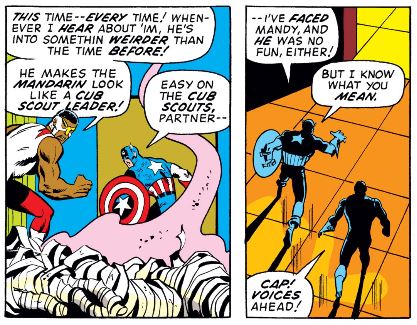 (Oh Mandy… he comes and he gives without taking, but still you send him away. Oh Mandy!)

The Claw manages to capture Cap and Sam, and in issue #167 we see them escape from his trap (which seems to be stolen from an episode of the 1960s Batman show) using teamwork and a bit of Cap’s enhanced strength. 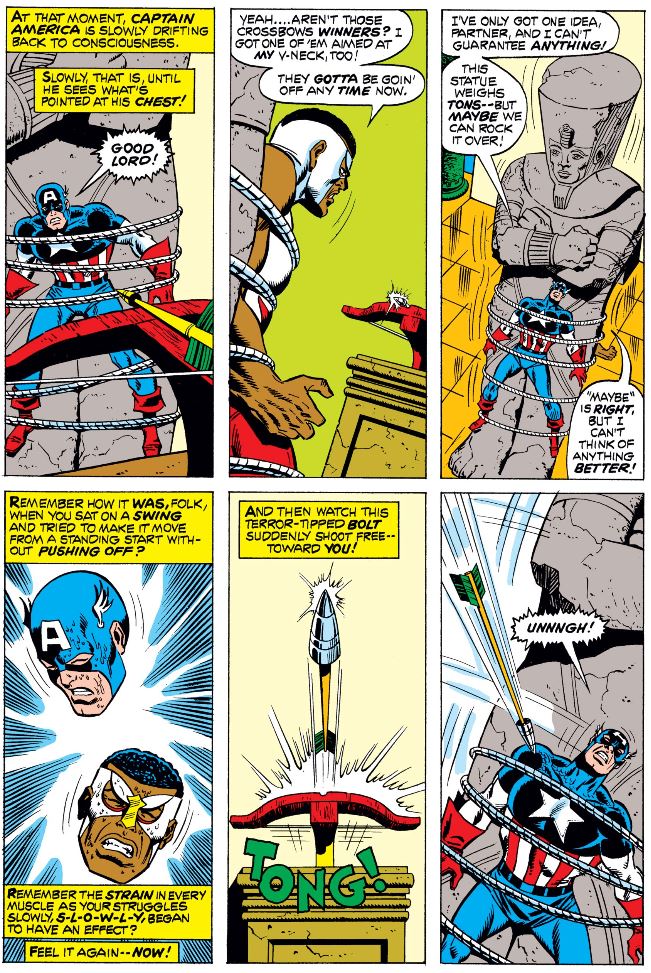 The Yellow Claw escapes—as he does after he fights Cap and Sam again at the end of the issue—but more meaningful for our purposes than their final battle is Cap’s more emotionally fraught confrontations with Sharon and Peggy. 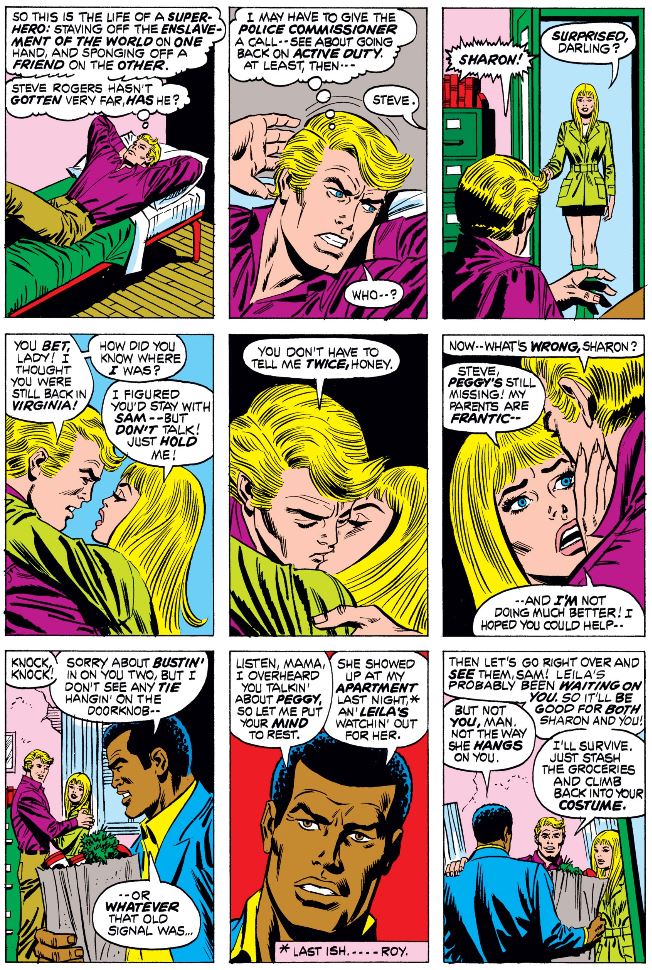 So… Cap didn’t tell Sharon that he knew where Peggy was? Maybe he just forgot, but jeez Louise, that’s cold.

But we’ll forgive Cap that, seeing that he’s facing a difficult conversation with Peggy, whose heroic spirit remains undiminished after all these years. (It’s too bad we didn’t get to hear her conversation with Leila!) 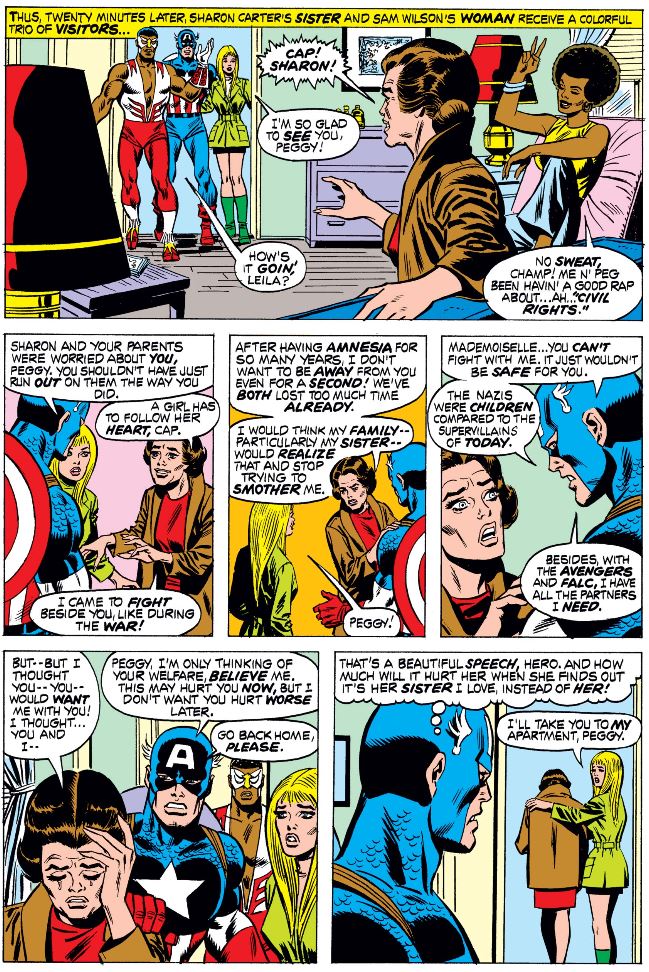 At least he’s aware, as much as he can be, of how this must be affecting Peggy, and is being careful to protect her from too much bad news at once. (Wait until she finds out Sharon is not her sister but her niece. Weird how that happens, huh?)