These five issues, plus Defenders #8 and #9 and an epilogue to Avengers #115 (in which Captain America does not appear), comprise the “Avengers/Defenders War,” by all accounts the first extended crossover between two different comics titles, in that the story went back and forth in each titles over four months, amounting to a biweekly story.

There isn’t much of a story here: Dormammu and Loki manipulate the two teams into fighting to gather the fragments of the Evil Eye, destroyed in Fantastic Four #54. Most of the story is made up of battles between specific Avengers and Defenders, and as such, Cap only appear in the set-up, finish, and his battle with Namor in Avengers #117.

But let’s not get ahead of ourselves… in Avengers #116, the team arrives at Doctor Strange’s Sanctum Sanctorum looking for the Black Knight, who was previously turned to stone and whom the Defenders were manipulated (by Dormammu) into thinking could be saved using the Evil Eye. But after Thor knocks… 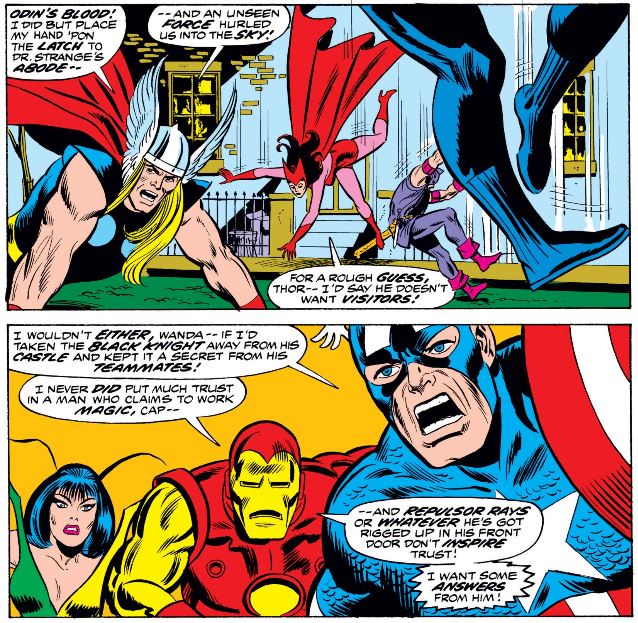 After Strange’s manservant Wong asks them to leave and they refuse, the Sanctum’s security system kicks in again (but not before Cap and Wanda see the Black Knight inside).

Fearing Dormammu’s evil plans may reach as far as Asgard, Loki decides to send his own agents after the pieces of the Evil Eye, and so appears in front of the Avengers and tells them that the Defenders are seeking the Eye to conquer the universe. (I mean, obviously, that’s been the Hulk’s plan all along.)

The Avengers split up to go after the various Defenders, which at this point include Doctor Strange, the Hulk, the Silver Surfer, the Valkyrie, Hawkeye (surprise!), and most important for us, Namor. In Avengers #117, Cap goes to Japan to face his regal chum for the first time since briefly fighting in Avengers #4, and more significantly, their WWII days as Invaders (which were glimpsed in Avengers #71 and will take off for real in Giant-Sized Invaders #1 in a couple years’ time).

But Japan isn’t thrilled to see Cap, who has to argue his political neutrality (which his outfit, to be fair, must make rather difficult). 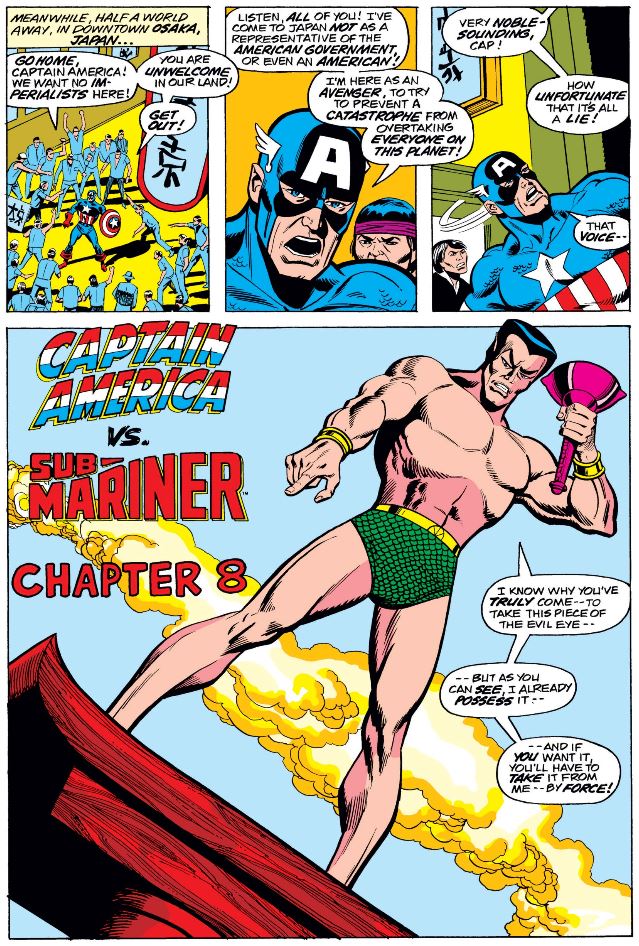 As we see above, Cap is reliably defiant—and Namor is definitely more insolent than in later interactions with Cap, when he is usually deferential to the one surface-dweller he actually respects.

How great it is that Cap’s shield goes “CLAM” when it hits Namor? Seriously, though, it’s nice to see Cap acknowledge a foe’s superior strength while realizing that skill (and surprise) can overcome it. (We often saw this in the judo lessons he would give in the early Tales of Suspense stories.)

Below, we see that Namor is destined to be a Fleetwood Mac fan, and we get another great sound effect when Namor lands on the shield. 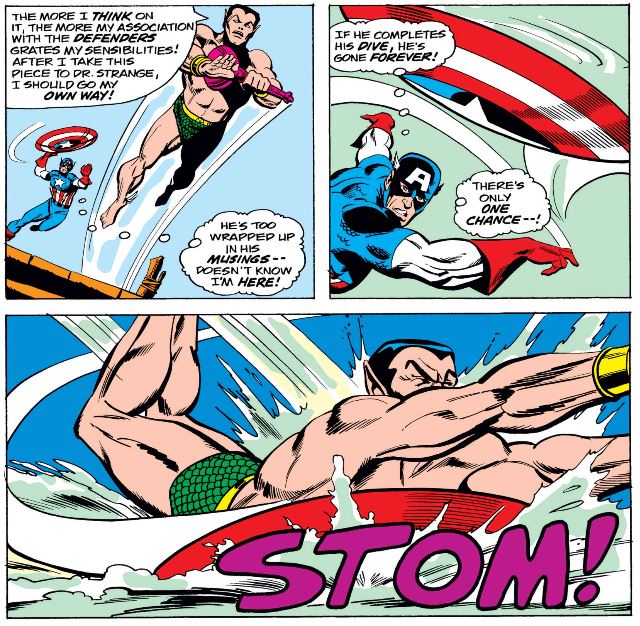 After Cap catches up with Namor, we get a tidy exchange about force and tyranny, with Namor characteristically mocking Cap’s earnest beliefs.

As if Cap fighting Namor weren’t enough to earn your two dimes, we’re joined by Japanese mutant Sunfire, who fought the X-Men and Namor earlier (and becomes an X-Man later). Sunfire decides the Evil Eye fragment must be a pretty big deal if Cap and Namor are fighting over it (and violating national sovereignty to do it, perish the thought). 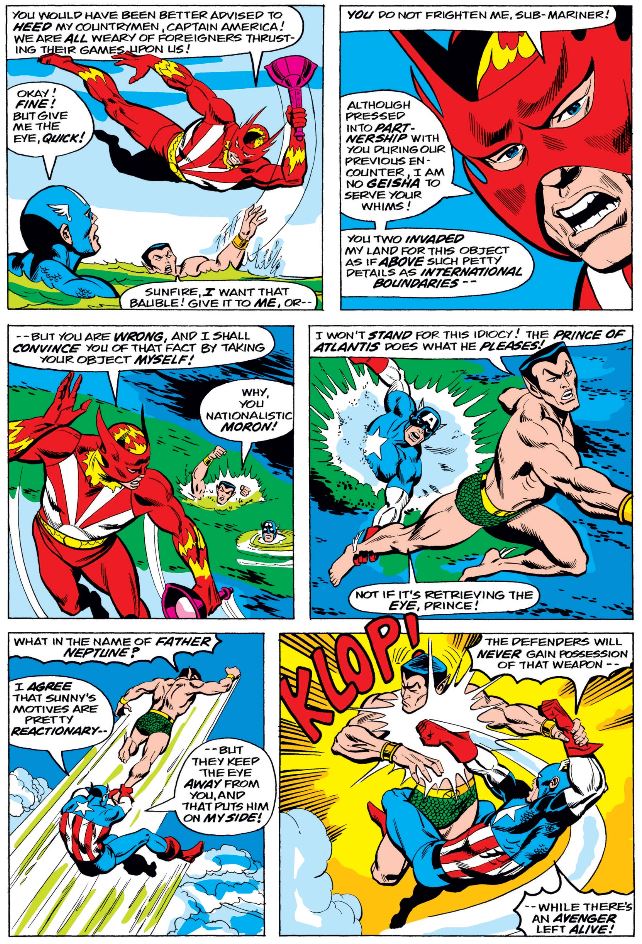 Finally, Cap and Namor say enough to each other that they start to figure out that not all is as they thought (something the other battling heroes have yet failed to do).

I really like the last panel above, as Cap reconsiders his position before continuing to fight—as always, less concerned with winning than with being right (and doing what’s right).

In the sky, Sunfire and Namor do battle, and when Sunfire drops the Eye fragment, fate lends a hand, and Cap is grateful for it. 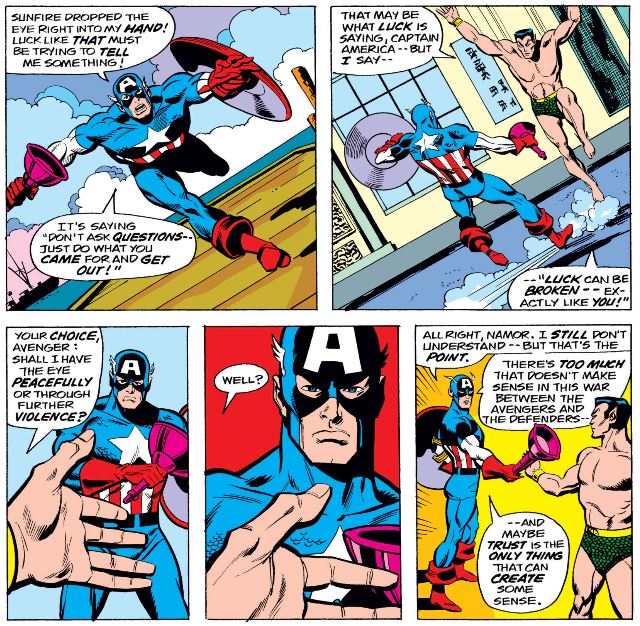 In light of questionable facts (especially from Loki… Loki), Cap wisely chooses to trust a former ally, and together they leave to discover the truth.

In Defenders #10, Thor and Hulk’s battle is interrupted by the rest of their teammates, surprisingly united… 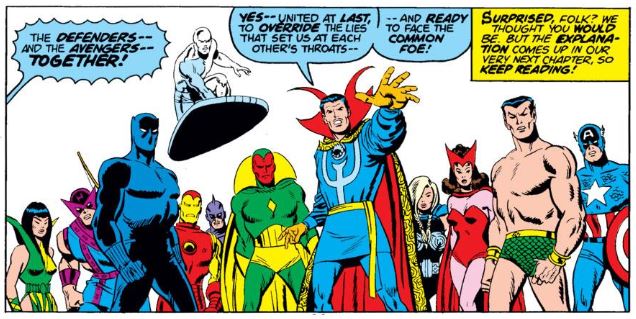 …which is explained in a flashback, as Namor brings the Avengers to the Sanctum Sanctorum to meet the Defenders and explains what he and Cap figured out.

After confirming that they have no reason to fight after all, they break into smaller discussion groups (reminding me of my favorite panels from the JLA/JSA team-ups of the 1970s and 80s, such as this one).

Cap gets a chance to express his humility, a sentiment shared by his fellow heroes. 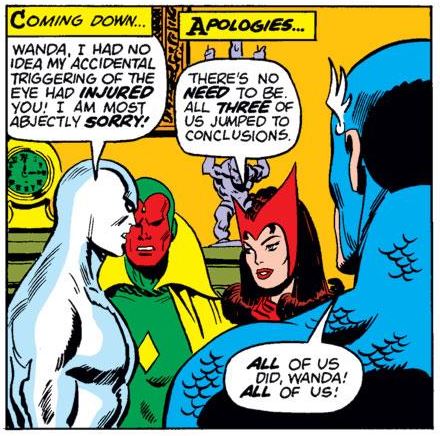 When they finally remember that Thor and Hulk are still out there somewhere… and probably fighting, as they do… both teams rush off, and Cap heads up damage control, protecting civilians “from some of us” if not their enemies!

By the end of the issue, Dormammu steals the Evil Eye and reveals himself, merging his dimension with Earth’s. In Avengers #118, the battle is joined, but when Doctor Strange wants to pursue Dormammu deep into his own dimension, Cap puts his foot down, arguing for the priority of protecting Earth’s inhabitants.

Doctor Strange is no… umm… stranger to this type of conflict, sharing Cap’s outsized sense of responsibility (as I explain in my chapter in Doctor Strange and Philosophy).

Luckily, he and Cap don’t need to settle this, as the solution comes in the form of…

(They mean Nick and Cap’s battle with the Yellow Claw in Captain America #165-167.) The Avengers and Defenders leave Nick and S.H.I.E.L.D. to deal with Earth, but they don’t have to do it alone, as the rest of the Marvel menagerie join in too, including Doctor Doom, who isn’t letting anyone conquer the Earth before he has a chance to do it! 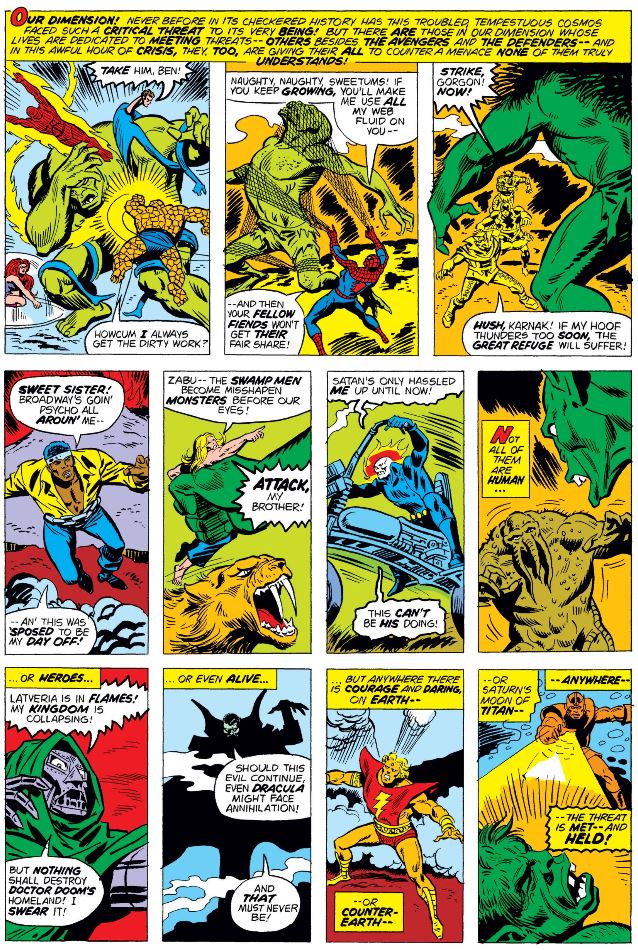 The Avengers and Defenders—to be honest, mainly the Scarlet Witch, with the help of the reliably treacherous Loki—manage to defeat Dormammu. After getting a slap on the collective back from Uatu the Watcher, Doctor Strange engages in a little mass mental manipulation. And by a little, I mean a lot, like whoa. 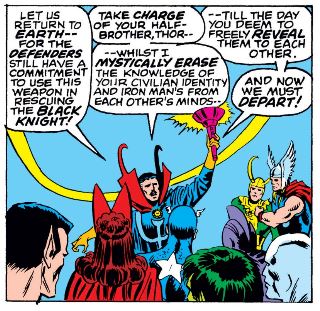 You see, one of Dormammu’s gambits during the battle was to transform Iron Man and Thor into their civilian selves (although it really didn’t require a transformation as such with Tony, but oh well), and apparently that didn’t sit too well with somebody. (However, they had figured it out several issues ago, in Avengers #113. Maybe this was what was being corrected, using Dormammu to contrive a “revelation” to correct for editorial purposes. Just one more day in the Marvel Universe, I guess.)

Even though Doctor Strange is no stranger… I mean, even though he’s familiar with such cosmic manipulations, it’s strange… I mean, weird, to see Cap just standing by, especially when he gets very angry at Tony for doing the same thing in Iron Man & Captain America Annual 1998 (as I discussed on pp. 192-93 of my book, if you can’t wait for the blog post!).

Even though the story officially concluded in Avengers #118, there is an epilogue of sorts in Defenders #11, when Doctor Strange does the same thing, this time to protect the secrecy of the Defenders’ existence, and Cap again just stands there.

Naturally, Tony thinks it’s just fine (and “honorable,” because Strange let the Avengers keep their memories). Maybe he has this episode in mind a quarter century later…