In this issue we meet the Golden Avenger, a familiar-looking fella who seems to have it out for Steve Rogers (and also seems to know he used to be Captain America, hmm). But there’s more to this encounter than meets the eye, and it ends up changing Steve’s views on being a costumed hero. Also, we see more of the Falcon’s reaction to Steve’s new status quo, and finally a resolution to the situation with Peggy Carter and her romantic delusions about Cap.

The issue opens with an ominously tranquil splash page… 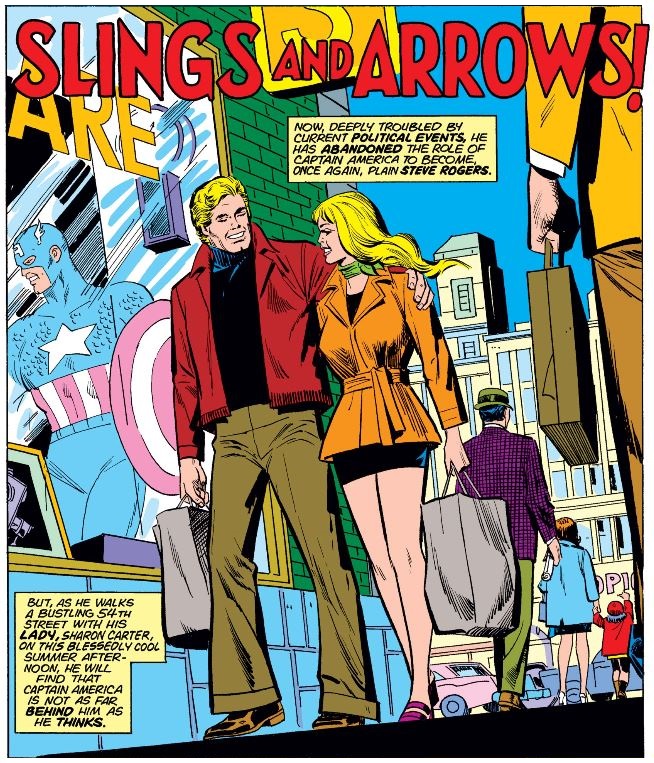 …followed by some interesting musings on the part of our (former) hero. 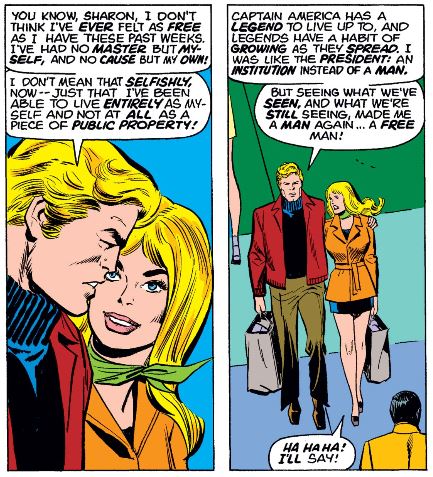 He may not mean that selfishly, but it still comes off that way, making a conscious choice to desert his responsibilities to live a private life—one that he’s long felt was devoid of meaning, although he longer seem to feel that way. It’s one thing to resent the burden of being the Sentinel of Liberty, as he’s expressed many times before as well as above, and another to abandon it altogether, especially when the country is reeling from another political upheavals, as we saw in the last post. He may be under no obligation to continue as Cap, but this apparent lack of any feeling of responsibility is surprising, to say the least. (The cinematic version of Cap made a similar choice, of course; see my comments on that here.)

Then he remembers the one person who misses Cap in her own way, and finally resolves to tell Peggy Carter the truth.

(It’s odd how Sharon seems to dismiss the problem by arguing that Steve hasn’t made any advances since Peggy’s return, as if her sister should have just gotten over it by now. If this is how she thinks, I’d think she would suspect that he’s made a pass recently.)

Just then, arrows begin to rain down from above… trick arrows, in fact.

Look, up in the sky! It’s a bird! It’s a plane! It’s Green… I mean, Golden Arrow! And he talks all fancy-like.

When he’s back with Sharon, Steve recalls the last time he retired, with the added bonus of remembering the utterly baffling Space Phantom episode from Avengers #107.

Maybe this actually explains, not just how no one remembers his secret ID, but how the Steve Rogers identity itself, which Cap intentionally “killed off” in Captain America #111, “came back.” (It still feels to me like an ad hoc retcon with an ambiguous purpose.)

And now, finally, Steve addresses Peggy’s issue… in what may be the most heartless way possible.

He couldn’t put the costume on, face her, and explain to her how so many years had passed and he had moved one. No, instead he addressed her from the shadowy distance like a coward, saying “he” has simply disappeared (when obviously she realizes that whoever is behind the mask is still around, but wants nothing to do with her). And this, after waiting so long to tell her anything at all… very sad.

Maybe we should root for the Golden Archer now?

While Steve seems to regret what “happened” with Peggy but accepts that “that’s the way it is,” the Archer returns, and Steve takes the chance to let his anger out in a way he never could as Cap. This is another strange implication, as if he held back his true feelings when in battle as Cap because Nazis and other villains did not deserve his rage. Or maybe it’s a recognition of the corrosive nature of anger, as we’ve discussed before (in the post on Captain America #146), but if that’s the case, he’s almost relishing his defiance of this ancient wisdom. (Gee, wait til he meets Wolverine.*)

* OK nerds, I know that later we find out he actually met Logan in World War II, but that story hasn’t been published yet, so just lay off.

Two slight digressions before we reach the end of the climatic battle between the Golden Archer and the Former Avenger. First, we have the Falcon, whom Steve refused to help in the last two issues (until he did and in the process embarrassed his friend), and who now sees Steve chasing another ne’er-do-well, again with an improvised shield in his hand. Sam’s hurt, and who can blame him.

And then another Cap wannabe, who faces a similar fate to the one from the last issue. 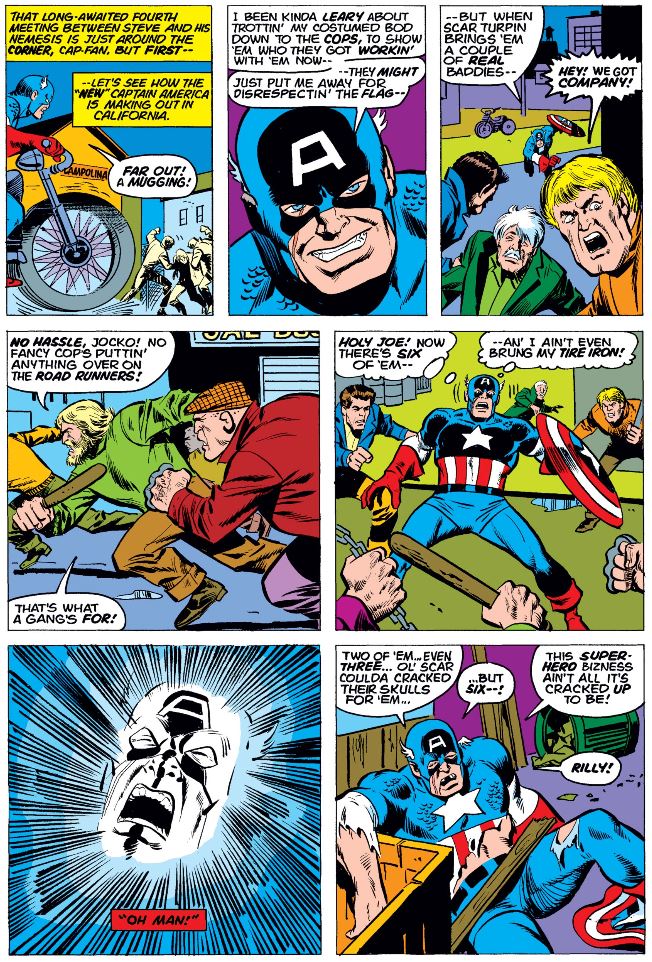 Anyway, back to Steve Rogers and his new friend: After they have a tussle, Steve finally gets the drop on the Auric Archer…

…and discovers it’s actually a friend from work. (And he had his cowl on under his facemask, weird.)

Clint explains some recent Hawkeyestory (see, it’s like “history” but with… oh, forget it), dropping a curious name in the process as well as working around the Space Phantom kerfuffle. (Comic book writers really shouldn’t resort to supernatural shenanigans to restore secret identities, as we learned from a more recent debacle.) 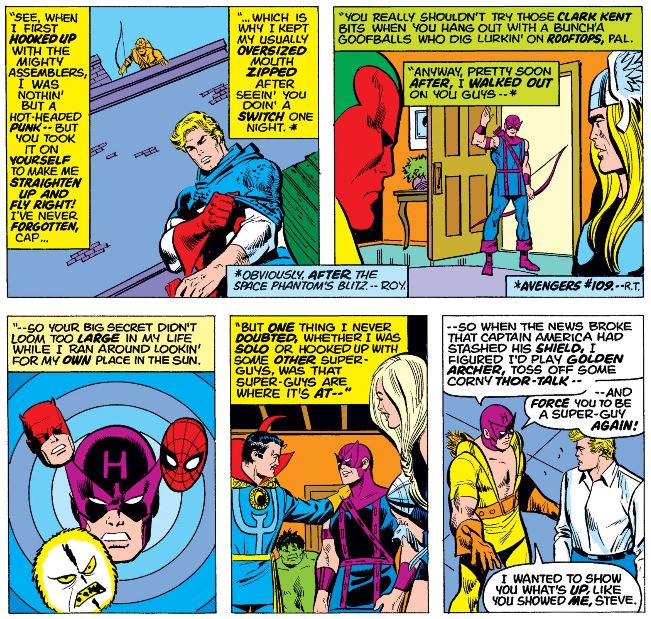 Of course, Steve’s decided not to be a super-guy, especially not Captain Super-Guy America… but Clint’s got that covered.

Why not indeed? Maybe even in the next issue…