These four issues—the last of Gary Friedrich’s short run—start out with Captain America facing Hydra (for real, not the fakes of the last issue), then confront him with a classic Spider-Man villain (soon to be a legendary Daredevil villain), and back around to Cap’s greatest foe (no need to be coy, he’s one of the covers above). We also see Cap’s brief (and inglorious) appearance in Iron Man’s book during this time. Not much of significant ethical interest here, but we do have romantic intrigue as Sharon Carter seems to gain a rival for Cap’s affections, and Falcon makes his long awaited return to the title after… zero issues away. (I told you he wasn’t going anywhere.) 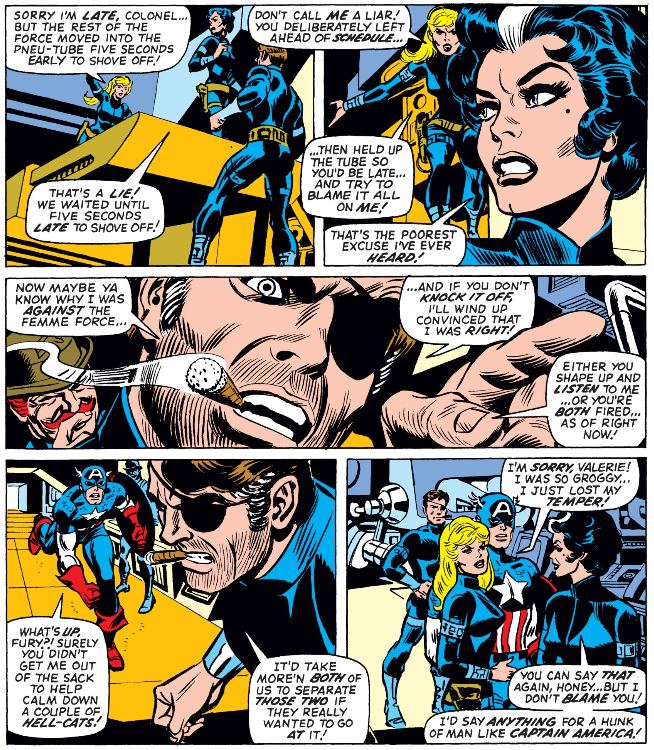 Later in the issue, as Cap tries to shore up Sharon’s confidence and they savor the thought of their coming vacation, Val makes her previous hint more blunt. 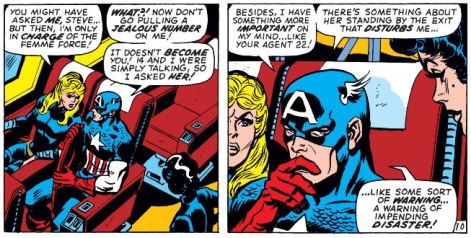 …a valid suspicion, as it turns out.

If we excuse his use of “girls” above, we can see Cap’s outsized sense of responsibility, a noble if extreme trait (and therefore not a virtue).

And below, we see the need for snap judgment in a situation of extreme risk (although, unfortunately, we’re not given any clue how we made his decision).

Valentina seems to turn the table of the sexism around her… until Cap catches her eye. 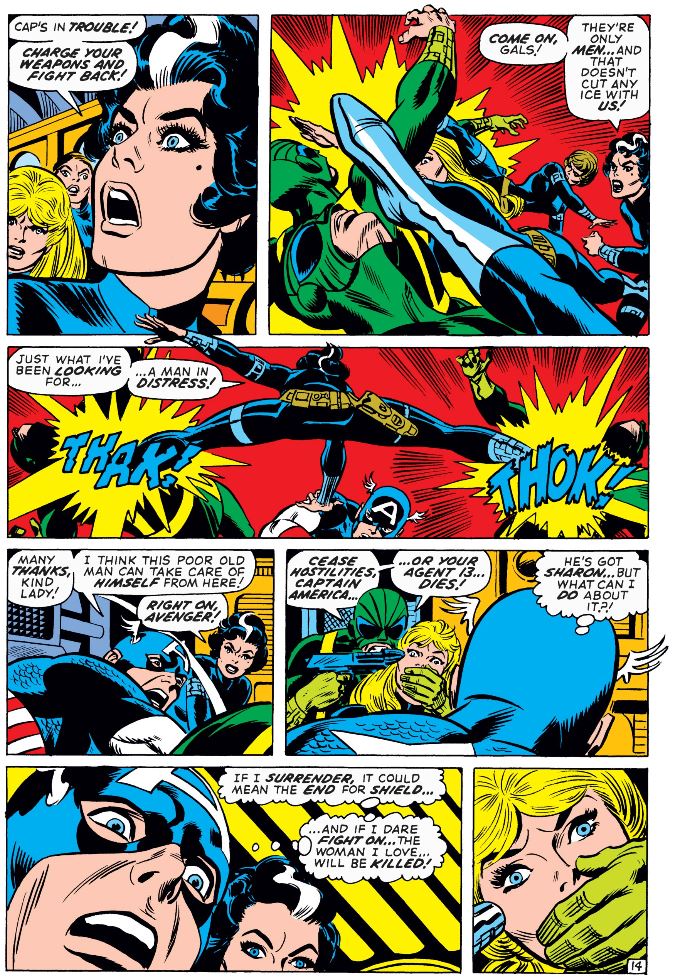 And here, Cap finds himself in a classic superhero tragic dilemma: save your love interest or save the larger group (usually the world, but in this case S.H.I.E.L.D.). Luckily for him (but unfortunately for us), he’s saved from having to make a choice, thanks to Valentina (although she’ll get no thanks from Sharon!). 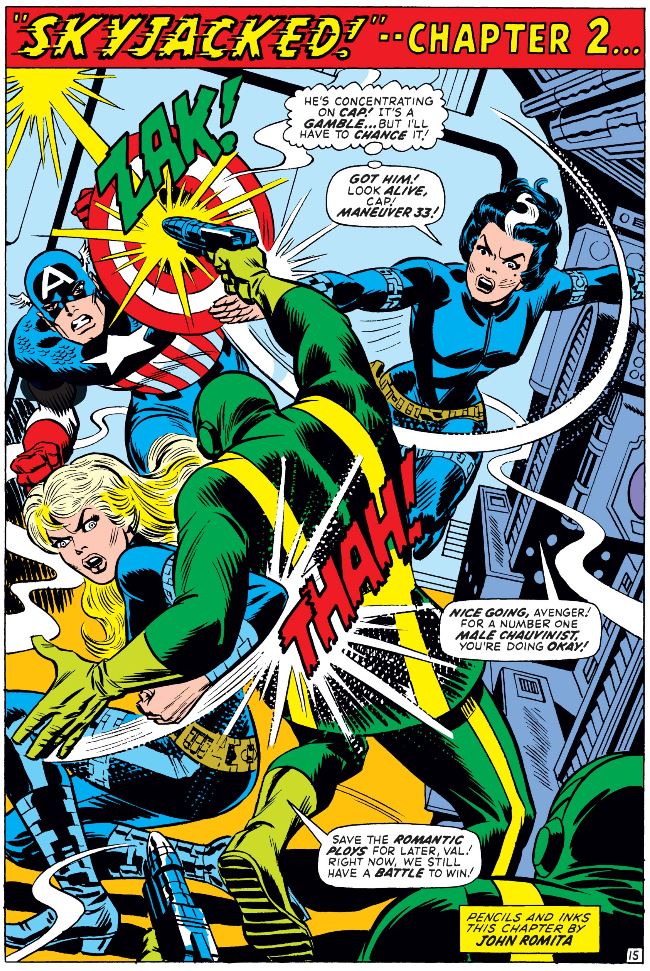 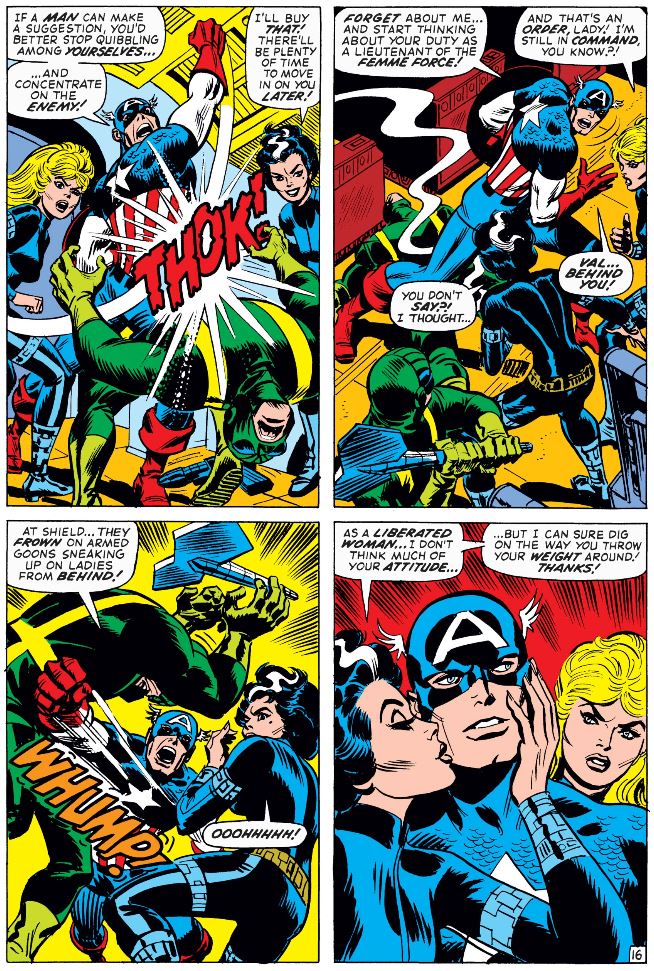 Val is anything but subtle.

I wonder if the teacher Cap references below is Mrs. Crosley, whom he remembers in Captain America #250 (as quoted on pp. 96-97 of my book) as teaching him the duty to fight for liberty and justice?

Below we see Cap in a rage after Sharon is hurt—all too understandable but hardly virtuous.

Issue #146 starts in the same vein, with Val of all people being the voice of reason.

Cap has clearly lost it—a fine illustration of Seneca’s warnings about the corruptive influences of anger, as discussed in chapter 3 of my book—but Val snaps, or slaps, him out of it, after which he is thankfully self-aware.

Cap has to make yet another quick decision in circumstances of extreme risk, but this time we see how he relies on his skill with the shield to minimize the chance of disaster.

After the fight ends and the plane lands safely—thanks to Eric Koenig, a former member of Sgt. Fury’s Howling Commandos, seen above—Cap sees Sharon off to the hospital. Then, in what seems an ill-advised move, he goes to dinner… with Valentina. (And he thinks her intentions are “good.”)

Meanwhile, Hydra agents sneaked into the hospital and abducted Sharon. How do you think Cap will react?

Cap is mighty careless with his “secret identity” here, assuming it still matters to him.

Val follows him, presumably to be ready to slap him again if he loses control… and judging from below, it’s a good idea.

When Cap finds Sharon, he finds himself in yet another moral dilemma… and is again saved from having to make a choice by Val. (She’s certainly earning his gratitude if not his affections.)

The ensuing battle between Captain America and Femme Force and the agents of Hydra carries over into issue #147, where Val reveals, even if only to herself, just how deep her feelings for Cap go (and her realization, similar to Cap and Sharon, that her duty must come first). 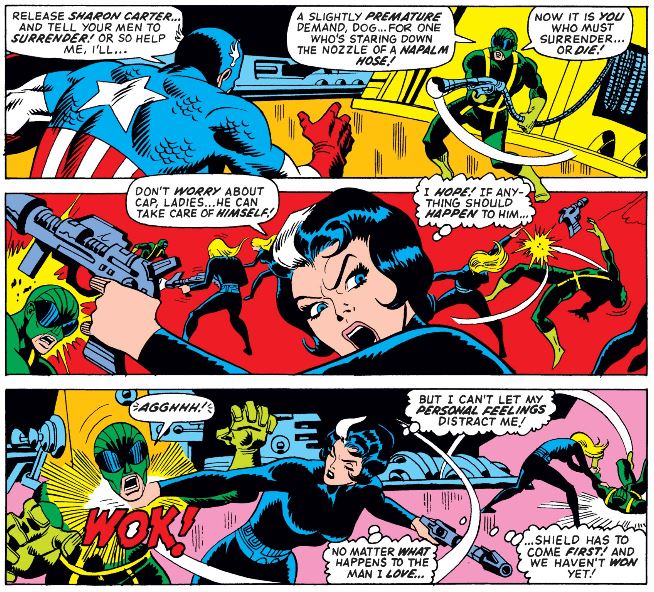 Below, Cap faces what even he sees as “the same deadly choice,” but this time he solves it himself… or does he?

And… we’re back to Rage-Cap, until you-know-who speaks up. 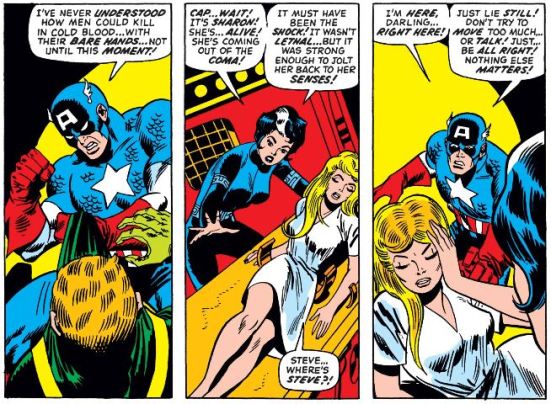 Anyhoo… it turns out the Supreme Hydra is Richard Fisk, whose father is none other than Wilson Fisk, otherwise known as the Kingpin, well known at this point from Spidey’s book and soon to become an archfoe of Daredevil (and later the shining light of the first and third seasons of the Netflix show).

It is very difficult for me to believe that Captain America would ever consider Wilson Fisk a serious physical threat. As quick as any foe he’s ever faced, as “probably at least as strong”? Please.

Nonetheless, below Fisk proves to be… the Bane of Cap’s existence. (Not sorry!) 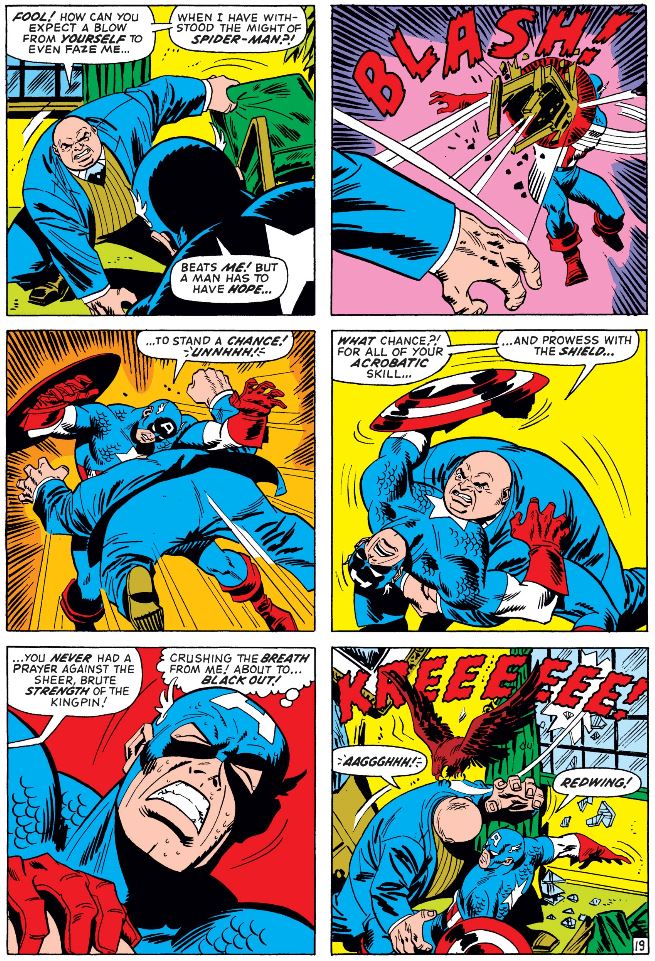 And it’s Redwing to the rescue, yet again, followed by the Falcon, who has been present in every issue of this storyline, waking after dreams of Cap in danger (in issue #145) or being recruited by S.H.I.E.L.D. to help Cap fight Hydra (in issue #146), which he turns down before having the change of heart that led to his reappearance at Cap’s side.

But wait… did you think the Kingpin was the real threat behind Hydra? Not so fast! 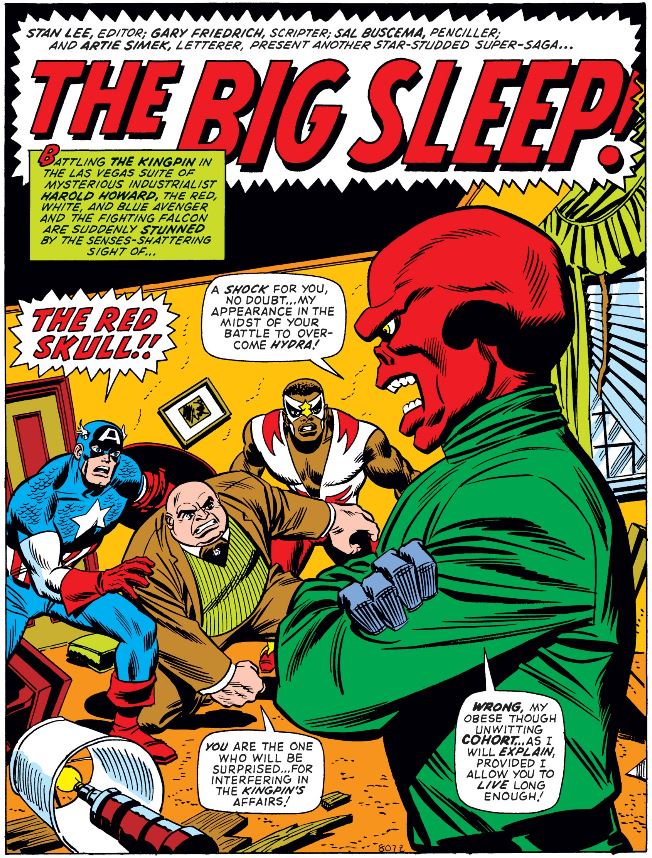 Wow, we haven’t seen the Red Skull since… when was it… oh yeah, issue #143, when he was spurring on racial discord in Harlem. (I have a feeling that next time Cap finds his dry cleaning missing, he’ll discover the Red Skill behind it.)

What is interesting here, however, is the Skull’s explanation the links between him, Hydra, and Nazism, which are relevant to the controversy over Cap being Cosmic-Cubed into allying with Hydra in the recent Secret Empire storyline (not to be confused with the Englehart classic coming soon to this very blog).

Not only is the Skull making is short-awaited comeback, but he’s bringing Sleeper 5.0 with him. (You may remember the previous Sleepers from such classic comics/posts as Tales of Suspense #72-74 and Captain America #101-102.)

The Red Skull sets up another classic tragic dilemma for Cap… and Sam’s not really any help. (Thanks, buddy.) Cap insists on finding a way out, denying the tragic dilemma, and the Kingpin just wants to force the issue (literally.)

Note that Cap also agrees to work with the Kingpin (assuming he follows orders), as he has in the past with other villains such as Batroc. We could see this as putting aside disagreements for a higher cause, or maybe Cap’s belief that anyone can rise above their worse nature and do good, despite their more base inclinations. (Or maybe he just wants to keep an eye on him!)

I find something almost poetic in the awe Cap expresses in the panels below.

Once Cap makes it inside the Sleeper, there’s a scuffle—there’s always a scuffle—and Cap gets a chance to crack wise and give a not-so-welcome lesson. 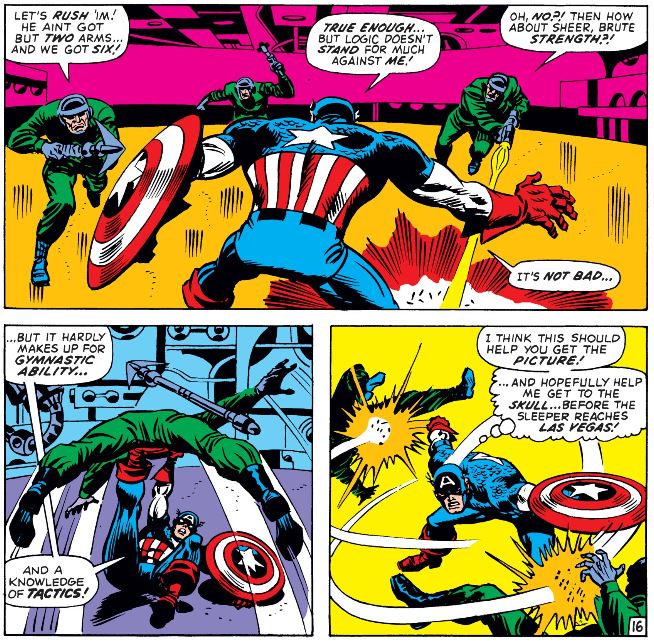 Nonetheless, the Red Skull gets the upper hand, has Cap in his sights, and… it’s Redwing to the rescue once again! (How come his name’s not on the cover of this book?)

Cap is sure to thank the real hero here—and Sam—although the latter does not take the bait of the word “partner,” and Captain America and the Falcon remain a team in name only, for the time being. 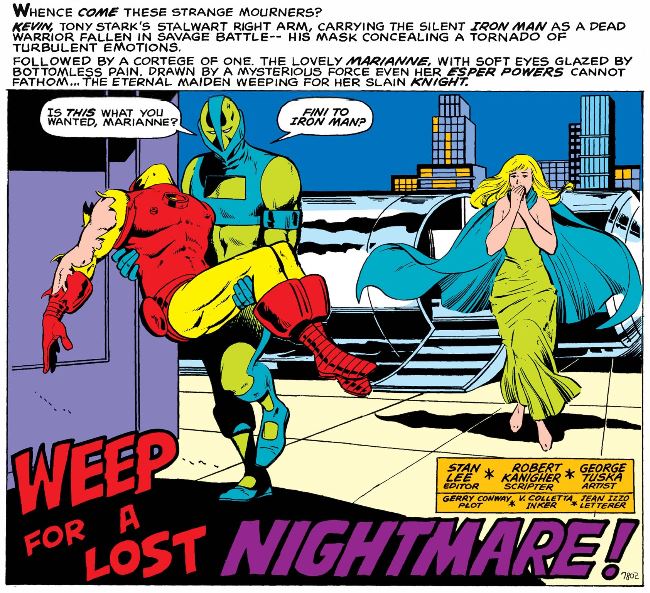 When they bring him to Avengers Mansion, where Cap is on monitor duty, the Sentinel of Liberty jumps to the wrong conclusion. 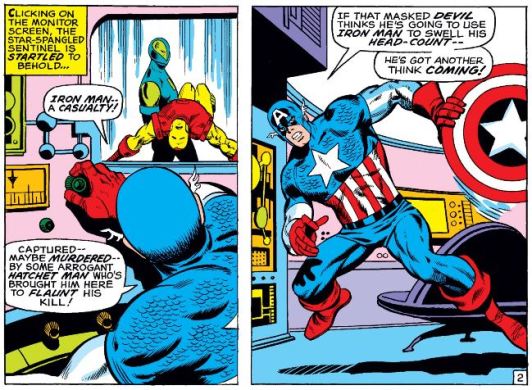 As fine as his intentions and his impulse to protect his friend were, Cap nonetheless mixes it up with the man who’s trying to save Tony, and only after Kevin holds his own long enough to explain the truth to Cap do they straighten things out and get down to business.

Yes, Cap, you certainly “jumped the gun”… but only because you haven’t known Tony long enough yet! (I kid, I kid.)

Collected in: Iron Man Epic Collection: The Fury of the Firebrand and Marvel Masterworks: The Invincible Iron Man Volume Eight