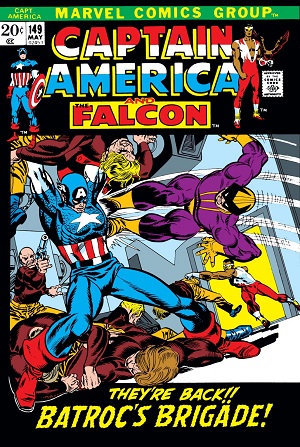 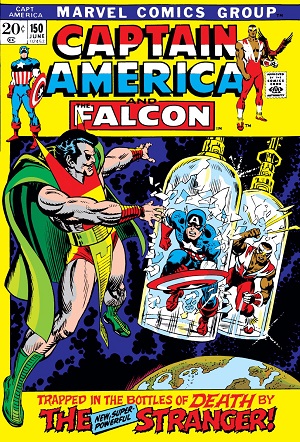 These two issues continue the romantic intrigue of the past storyline, while reintroducing Batroc and a new Stranger (not the old Stranger whom we knew so well e still called him the Stranger). These are the first two of four issues scripted by Gerry Conway, which set the stage for Steve Englehart’s legendary run starting (with a bombshell) in issue #153.

We’ll start with a “brooding Avenger,” once again lamenting the state of his life, when in walks a very angry director of S.H.I.E.L.D.

Setting aside Angry Nick for a moment, you have to appreciate the difference between this scene and Cap’s torment earlier over wanting to join S.H.I.E.L.D., writing Nick a letter (in Avengers #15) and not receiving an answer quickly enough (in Avengers #19). What’s even more interesting is that joining S.H.I.E.L.D. was one of Cap’s earliest attempts to find a life for himself outside of being Captain America and an Avenger, and now he rejects that, even though he still has the same issues with purpose and meaning.

And oh yeah… what’s up with Nick, anyway? We’ll find out in the next issue, although Nick won’t actually admit it until issue #152 (covered in the next post). Let’s just say it’s not his proudest moment (and that’s saying something).

At least Cap didn’t have to surf on top of a jet off the helicarrier, as in Civil War #1.

And wait, “gentles down”? That must have been a misprint… or not.

Strange that he so easily “accepts” that he can’t see Sharon just because Daddy Fury forbids it… and that he’s thinking of Val at all. But when he sees the time, he remembers that he’s due at police headquarters, where he’s still serving at a beat cop, and sees un homme très étrange… (Who could that be?)

Meanwhile, Sam has sent him a message to help find some missing kids, but the two heroes’ priorities are a bit askew. Nonetheless, they respect each other’s missions—which I suspect may coincide before they know it.

Quelle surprise… the strange man was Batroc, ze leapair! And Cap takes his reappearance as an opportunity to work out his own anger and frustration—a justified action, perhaps, but with an ignoble motivation. (We discussed the problems with Cap’s anger management in the last post in the context of issues #145 and 146.) 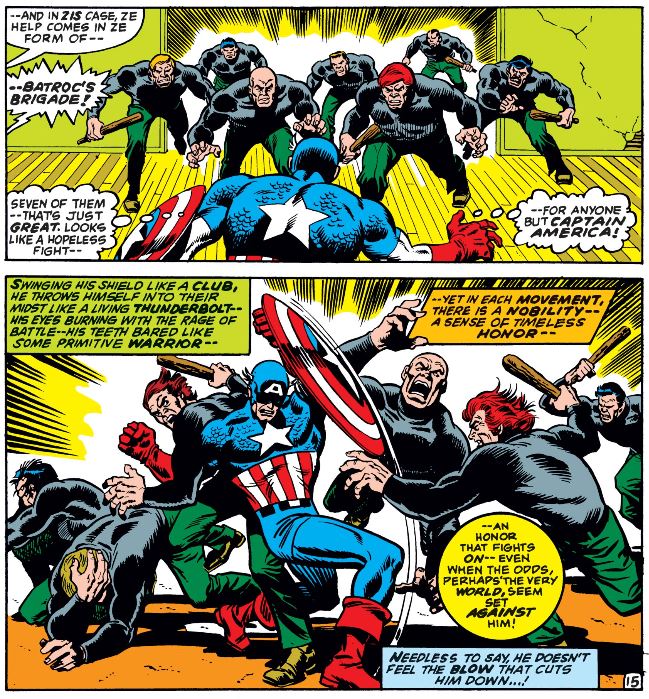 …which gives Conway a chance to wax eloquent about the contrast between Cap’s rage and his nobility and honor in combat (although these are not well explained).

(For more on Cap and honor, see chapter 4 in my book.)

Remember those kids Sam was looking for? Guess who’s got ’em… 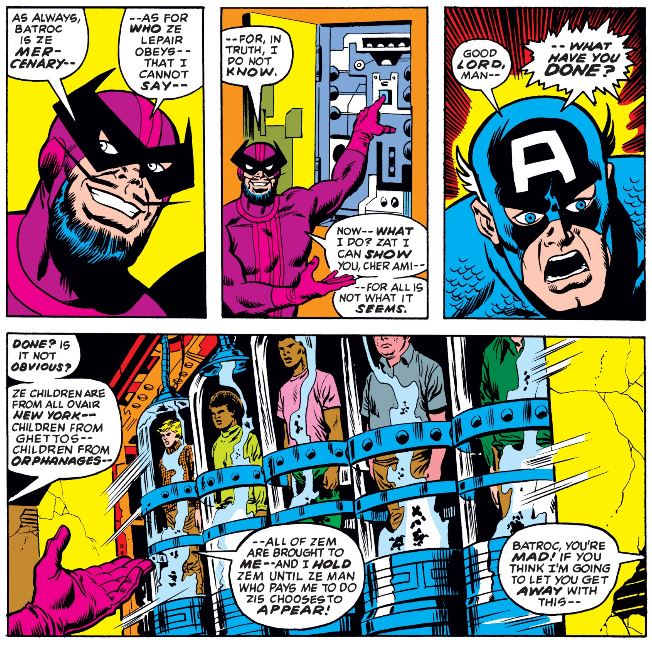 …and guess who wants them back.

Don’t toy with us, Sam… you know we always love to see the Fantastic Four!

It’s strange that, below, Sam seems happier than Cap is to be working together again, given that he’s the one that has pulled away lately.

Not quite the classic Kirby battle scenes of old (although I see a bit of homage in the center panel), but this will do.

In the very end of the issue we learn who hired Batroc, and we learn more about him in issue #150: a man who at first impersonated the Stranger, a cosmic being who faced off against the X-Men and the Fantastic Four, among others, but was actually just… Jakar. You know—Jakar! (One suspects an editorial snafu here.)

As Jakar tells Cap, the Falcon, and Batroc, he just wants to save his race and needs the abducted kids to do it. (That’s all, no big deal.) 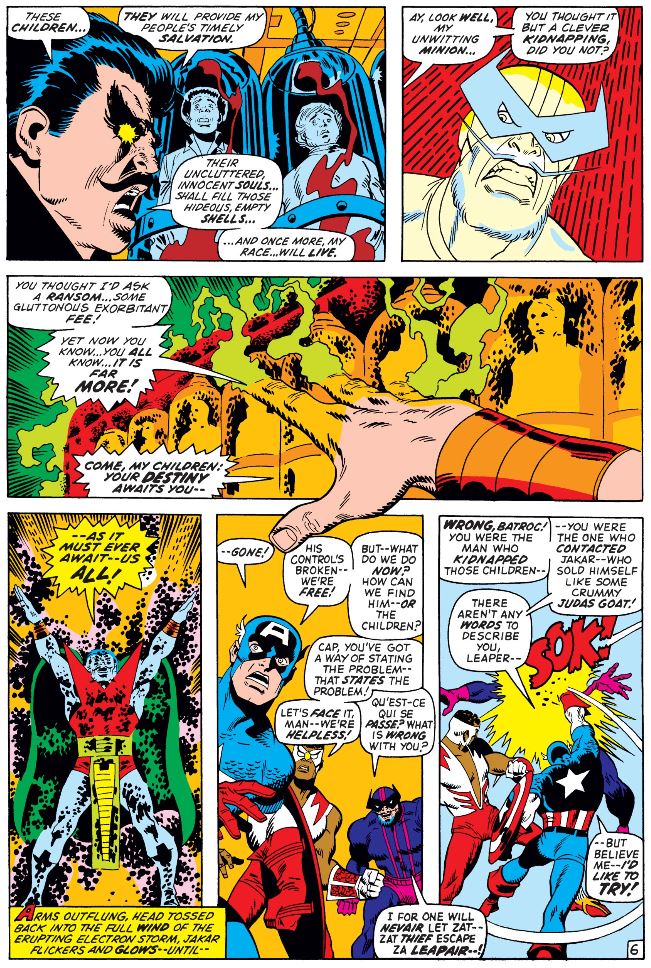 Then Jakar disappears in a wash of Kirby Krackle, leaving no one for Cap to punch but Batroc.

Now, back to S.H.I.E.L.D. and the reason Nick threw Cap out in the last issue. 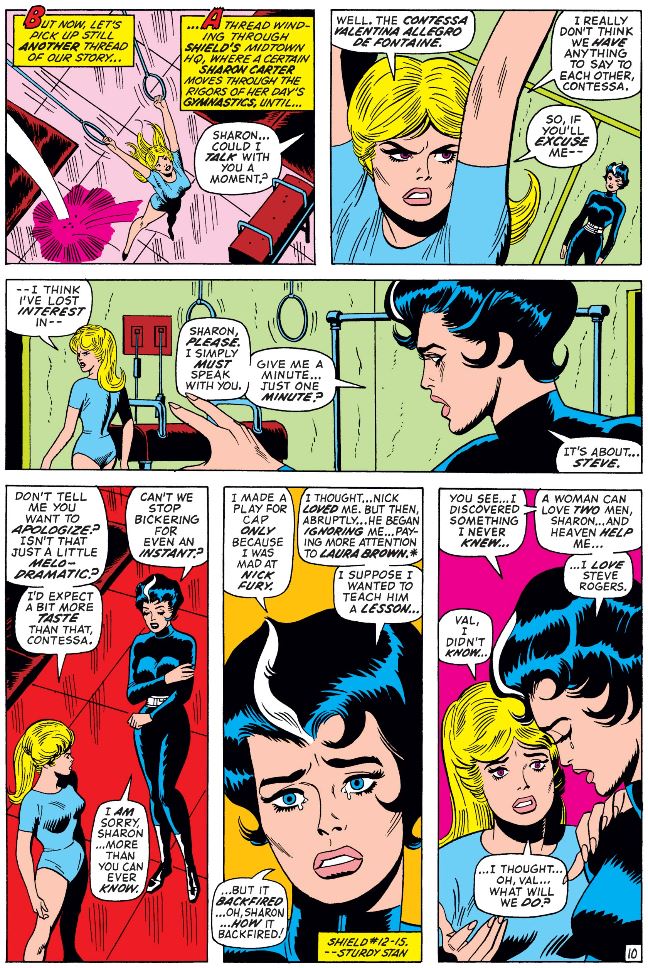 It’s rather generous of Sharon to feel sympathy for the woman who tried to steal Cap away and now says she’s in love with him. This may simply reflect Sharon’s confidence in her relationship with Cap, which would be understandable in the present-day comics, but at this point in the storyline, I don’t think that much confidence is merited.

“Intreat me not to leave thee, or to return from following after thee: for whither thou goest, I will go; and where thou lodgest, I will lodge: thy people shall be my people, and thy God my God.” (Ruth 1:16)

And if you rethink Redwing is going to save the day yet again, just wait!

…and dares impugn both the institution of the nation-state as well as Cap’s patriotism. (On the latter, see chapter 6 in my book; and although I’m no political philosopher or theorist, I’ve never understood the antipathy towards nation-states in science fiction, as if a one-world state is necessarily the preferable option for a heterogeneous people.)

After Sam uses his claws to break them out, we see just how personally Cap took Jakar’s comments.

We haven’t seen a display of shieldwork like this in quite a while… an underappreciated skill of Cap’s around this time.

No matter how many times they seems to split, Captain America and the Falcon remain a team when it counts the most. (And Cap gives Batroc a much-needed lesson in honor in combat, this mention more meaningful than the earlier one.) 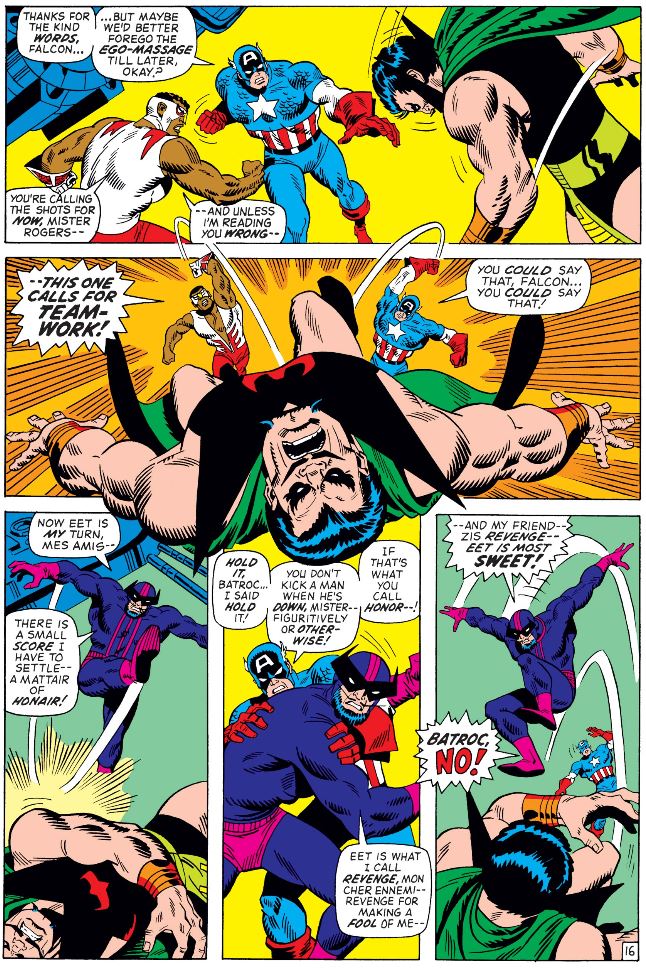 In the final battle against Jakar, Sam calls in their secret weapon… 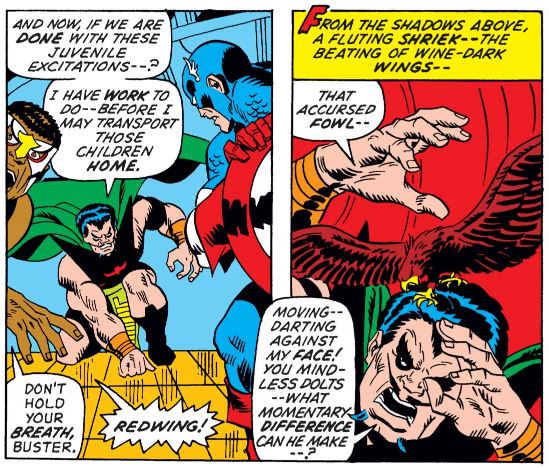 …and Cap makes use of a rare tool: the power of shame in the form of Jakar’s wife, the real motivation behind Jakar’s actions.

Jakar realizes the cost of his plan is too high, especially in terms of what his wife would think of him after he saved her, so he leaves to roam space and ponder his fate.

Unfortunately, it seems Batroc knows no shame, but Cap seems to. Or maybe he’s just returned to sulking…

…but not for long, as his confusion over Nick seems to reveal the truth before salvation appears at the door.

Again, Sharon is admirably but oddly sympathetic… but her and Steve’s attention soon turn to each other, in a long-overdue respite from events. (We all know how they feel!) 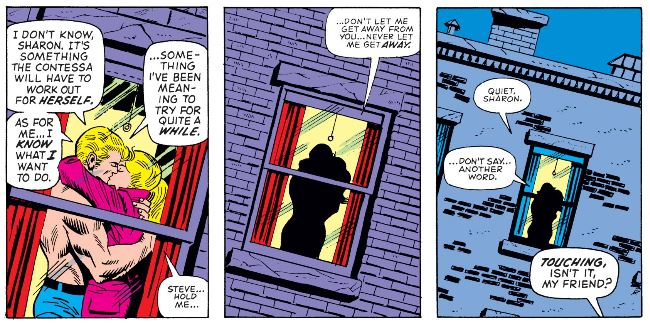 And who’s that speaking at the bottom? Come back for the next post and find out!

Cap also makes a quick appearance in The Incredible Hulk #152 in June, supervising General Thunderbolt Ross’s latest attempt to capture the Green Goliath, alongside none other than Nick Fury—and Cap is upfront with the general about how uncomfortable that situation is, given his and Nick’s rift of late.

Even after they capture the Hulk, and Nick gets petulant, Cap apologizes for him to Ross—and expresses his admiration and respect for his military superior while he’s at it.