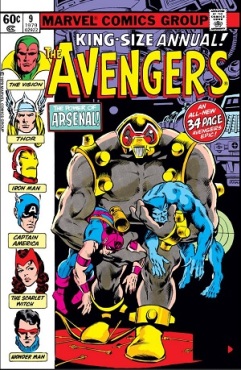 These three issues are three separate stories, the first of which is most interesting from our point of view, but all with something to offer fans of this blog. As with most of the recent issues, the relevant underlying story threads are Cap’s leadership of the team (in Iron Man’s absence, as explained in the last post), Falcon’s uneasiness with being “assigned” to the team to satisfy affirmative action requirements (in issue #181), and, as always, the positive presence of everyone’s favorite G-man, Henry Gyrich.

In issue #188, on their way back from the Scarlet Witch and Quicksilver’s ancestral home in Transia—with a quick stop at Attilan, home of the Inhumans, where Pietro lives with his wife Crystal—the Avengers debate whether they should fly through Soviet airspace to get home.

(See here for more on Gary Powers, whose US spyplane was shot down in 1960 while over the USSR, after which he was captured, tried, and convicted by the Soviets.)

As the team approaches the Soviet border, two Russian jets intercept them, and when Cap respectfully requests the OK to fly over their territory, one of the pilots pulls a Korath, but his fellow pilot clues him in by referring to heroes more familiar to him. 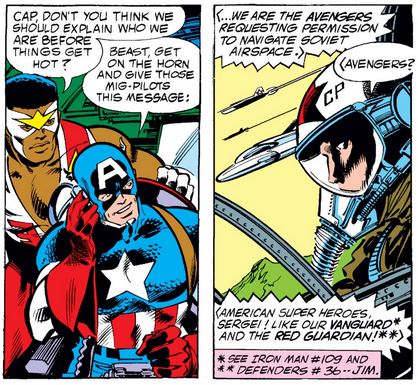 Before our heroes have a chance to answer, one of the jets breaks up in midair and the other rushes off to an emergency, leading the Avengers to debate whether to get the Don Heck out of there or offer their help. We see the whole range of opinions from our gathered heroes, with Cap in particular preferring in this case to respect national sovereignty even in the face of a “situation pointing south,” presumably due to the especially tense diplomatic atmosphere. 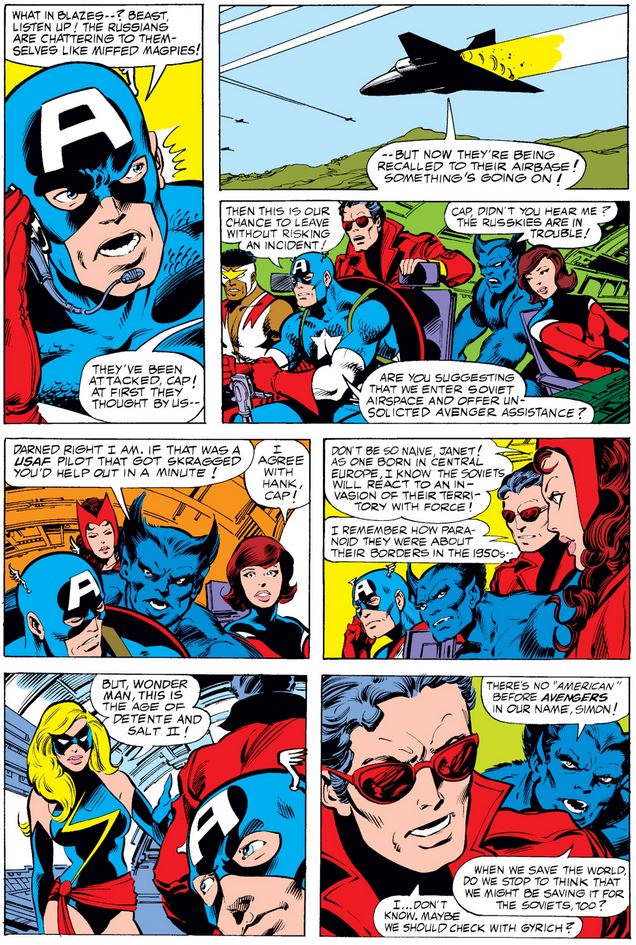 Before we consider the wise counsel of Mr. Gyrich, let me interject that the issue of international invention by superheroes is a fascinating and perennial topic in comics, and this won’t be the last time we see it in these pages (or this blog).

Cap continues his pragmatic stance toward the National Security Council’s restrictions on the Avengers, reflecting a general stance of respect for authority as long as its demands aren’t immoral or unjust, while Ms. Marvel takes matters into her own hands (literally) to push Cap in the direction of cautious intervention. 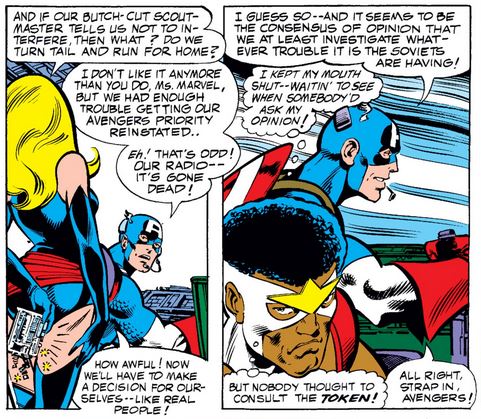 Above, we also see the first instance in these issues of Sam’s ongoing resentment about how he was invited to join the team.

When the Avengers land outside a nuclear power plant where the Soviet military is gathered, they get the only welcome they could have expected—until the Soviet colonel reminds his troops that Cap fought with them in World War II.

Before long, the threat—or one of them, as we shall soon learn—emerges from the power plant, and Cap urges caution and deliberation to no one who’s listening…

It was one thing for Sam to use such vernacular with Gyrich in issue #184 to express his anger at him for treated as a token, but his thinking it to himself above suggests that his resentment stretches to his fellow Avengers, who—unbeknownst to him—resisted the idea as well. Or does he have a grudge against Simon in particular, perhaps because he’s just filling in for Iron Man and the Vision, while Sam is a primary member of the team?

To his credit, Cap does pick up of his friend’s distress (as shown in the partial panel below).

Below, Cap shows he remembers his high school chemistry, while I can’t help thinking Dr. Will Magnus must be behind this somehow. 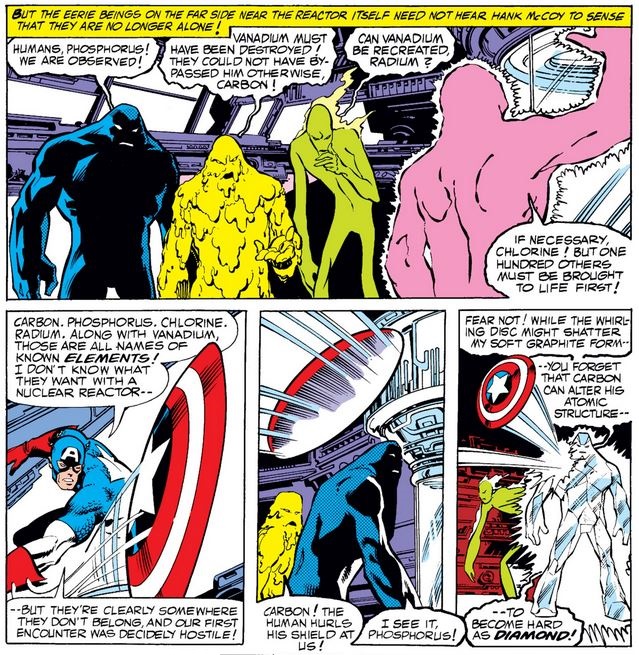 Sam joins the fray, once again making a reference to what he perceives as second-class treatment on the part of the team… 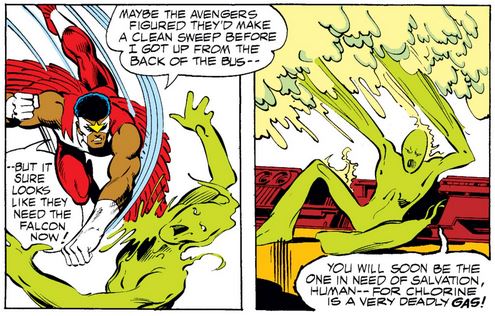 …but his tactical error leads Cap to call for the team to fall back, and also causes Sam to turn inward and question his own qualifications to be an Avengers. 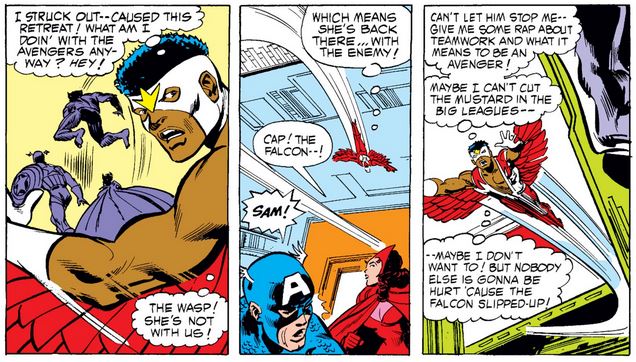 He sure knows Cap well, doesn’t he? Probably well enough to understand his decision below too (although not his overblown concern with Gyrich’s wrath).

To make matters worse, Cap forgets that the Wasp is a fellow Avenger, and has been for longer than he has…

…but makes a partial save soon afterwards as the reassuring leader. 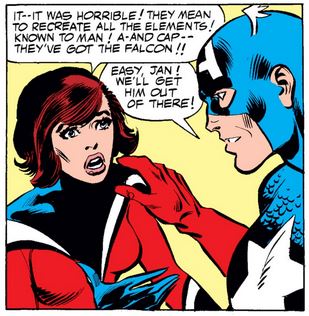 After they rescue Sam and destroy the Not-Metal Men, they need to get out of the power plant…

…and if Sam did harbor some grudge against Simon, I don’t think he does any more (although I don’t think this helps his self-confidence issues, and probably only reinforces his resentment over how he was chosen for the team over more powerful alternatives).

As our story wraps up, the Soviet military shows their appreciation for the assistance, and Cap makes a very welcome snide comment about Gyrich.

“Distruction”? I hope he was trying to tie the word to “disruption,” but I suspect a spelling gag like that would fall flat when spoken. (Or an editor missed it—nah, never happens!)

Avengers Annual #9 follows up on events from an issue of Iron Man we discussed earlier, featuring the same robot antagonist, Arsenal. (See the earlier post for other Arsenals this Arsenal ain’t.)

When Thor suggests the initial battle would have gone differently had he been there—verily!—Tony gets upset, and Cap has to reassure him… 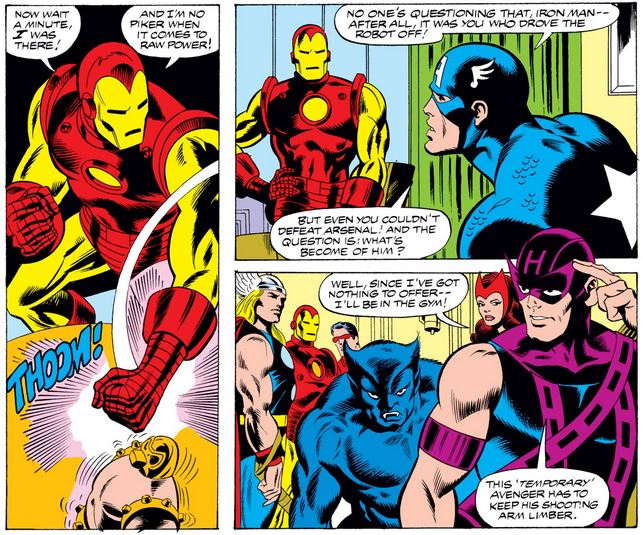 …and Thor joins him later in giving wise counsel to Tony, all of them agreeing to be careful. (Cap must be so proud.)

Below, we see Cap and Tony working together—a welcome sight, given their recent tensions—with Tony going so far as to protect Cap even if it compromises his efforts against Arsenal.

I won’t give away the ending, but the “mistress” behind Arsenal is quite a surprise indeed (and very personal to a certain Armored Avenger). Also, it’s great to see the pencils of Don Newton here, who drew excellent runs on Batman and others for DC, but very little for Marvel, before his tragic death at the age of 49. (We’ll see him here once more on Avengers #204.)

Finally, in Avengers #189, Sam tries to mend fences with Hawkeye, who was passed over by Gyrich for Sam, but Hawkeye blows him off (to have own adventure which takes up most of the issue, as reflected in the cover). Cap swoops in to be the reassuring friend again, which makes me wonder if Cap’s ever told Sam about the guff he got from Clint in the days of Cap’s Kooky Quartet!

Gyrich is very pleased with Cap’s compliance with bureaucratic expectations…

…while Sam extends his resentment of Gyrich beyond his issues with how he joined the team.

But when Gyrich doesn’t want to grant Wanda an extended leave of absence, the Avengers object—including, I assume, Cap, although he doesn’t want the Beast to live up to his name—and Gyrich… 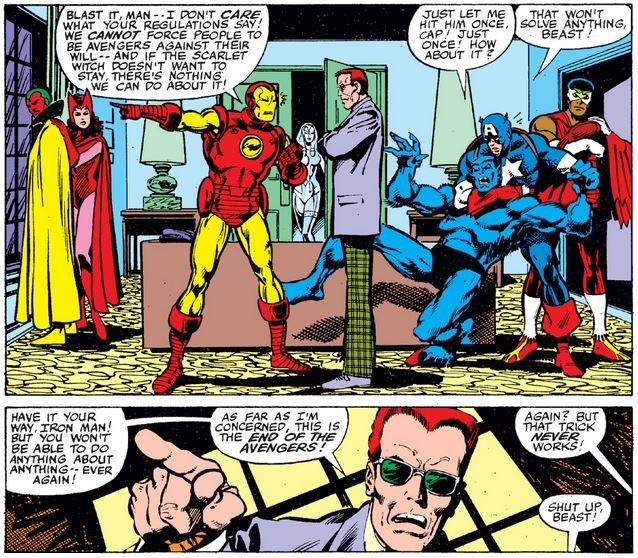 …well, Gyrich does what any useless manager does when his arbitrary exercise of authority is questioned. (We’ll see what happens next in the next issue and post.)

Both collected in: Marvel Masterworks: The Avengers Volume Eighteen.

Collected in: Avengers: Heart of Stone and Marvel Masterworks: The Avengers Volume Nineteen.