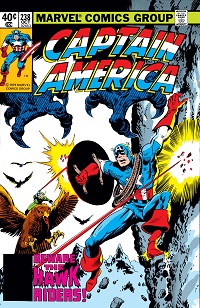 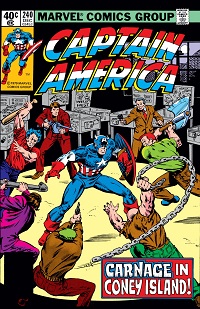 These three issues of Captain America take us a bit outside the current storyline (especially Cap’s new status quo established in the last issue) with fill-in issues by guest creative teams (a trend which will continue until a new regular team takes over with issue #247). Plus, a bonus pair of panels from a Fantastic Four annual, just for kicks!

…which, if nothing else, shows his icy determination and resilience. 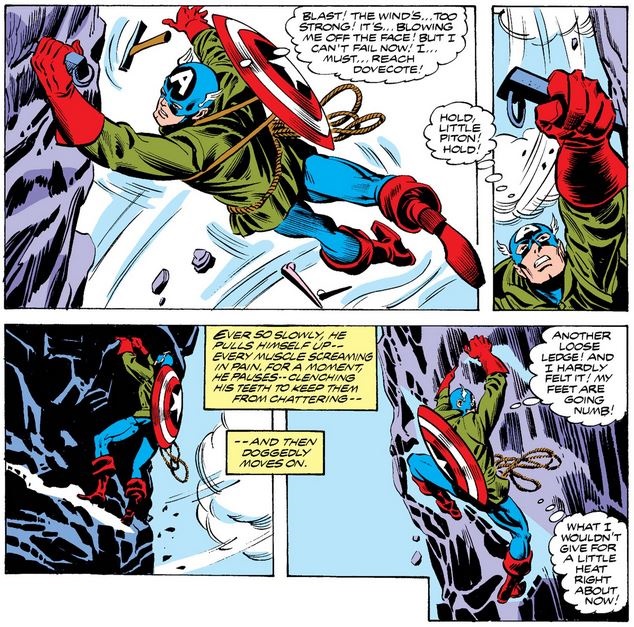 Cap does his version of the “yes it’s me, I bet you’re wondering how I got here” meme as he takes a break to reminisce on exactly that, providing the only link to recent issues as he references his chilly relationship with S.H.I.E.L.D. (since issue #231).

While speaking to Nick, Cap gets a strange vision of a woman named Snowfall, imprisoned due to her powers in a place called Dovecote high up in the unnamed mountains, who callsd on him to rescue her. 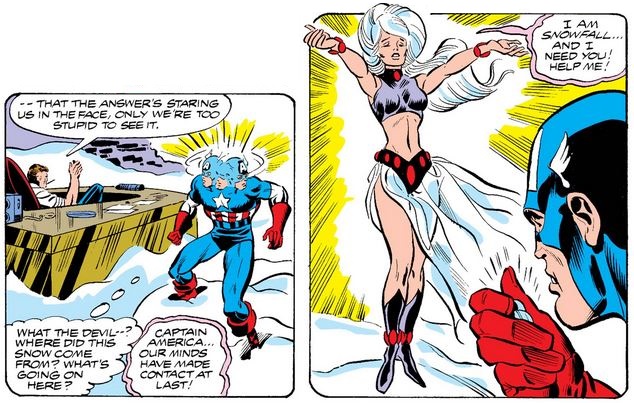 This brings us back to the present, where Cap has been cornered by Dovecote guards, armed with laser guns and riding giant birds. (Comics!) Below we see Cap’s classic defiance…

…as well as a little clever tomfoolery straight of classic Hollywood slapstick.

By the time Cap gets to Dovecote, he is reflecting on his exhaustion and pain, neither of which deter him from his duty—for which we never get a good reason other than being bedazzled by the vision of Snowfall—when he encounters a friendly fella with a name to match.

After they tussle for a while, Widowmaker gets the best of Cap, until Captain America #239 begins and a sudden distant message gives Cap a momentary edge (and a chance to show off his grammar skills).

More noble words below—albeit wasted, I fear, on Widowmaker—inspired, again, by a mere vision of a mysterious ethereal woman… 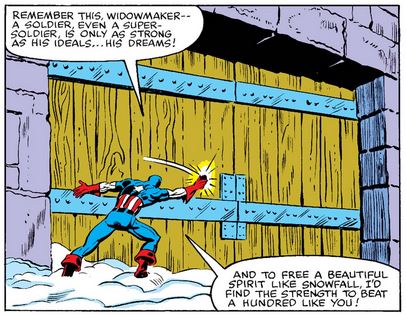 …a woman who, to make a long story short, turns out to be a little girl named Ginny Snow. But this is no ordinary little girl, as Cap learns, much to his shock and dismay.

If there were more background to this story, and if he’d had any real connection to Ginny, this could have been yet another tragic loss for Cap to bear. (And I didn’t even show you the illusions that the man behind Dovecote and Ginny’s abduction—an old foe of Namor’s named the Mind-Master—put Cap through, including reliving his defrosting in reverse, all of which could have affected him deeply as well.)

Things return to normal in Captain America #240, with Cap back in Brooklyn (Coney Island, to be exact), fighting thugs threatening an old man when all he wanted to do was take a walk. But, when duty calls, Cap answers.

When Cap learns why the man is being hassled, he swears to protect him… 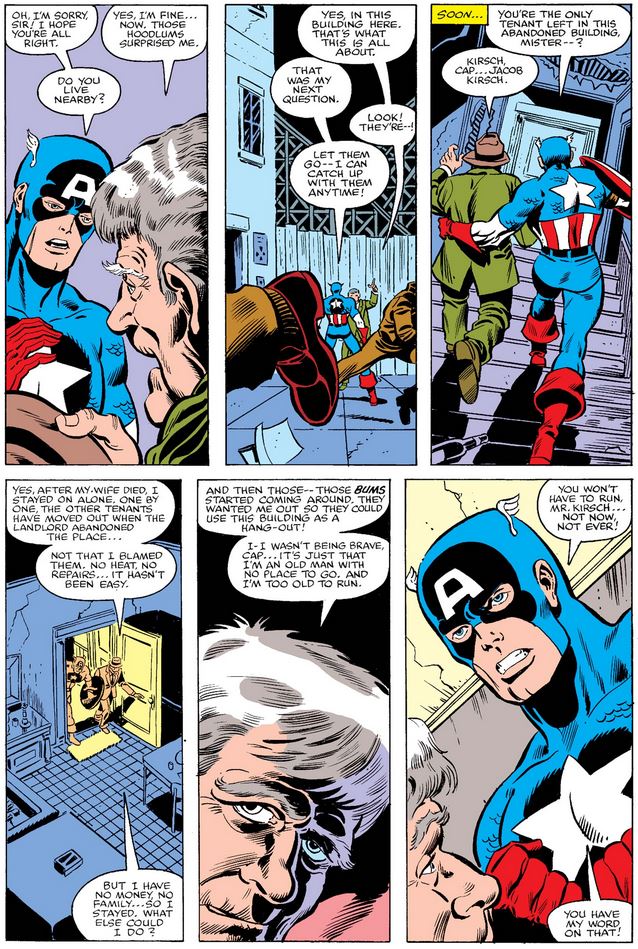 …and begins a Daredevil-esque tour through the seedy underbelly of Brooklyn to get to the bottom of it. 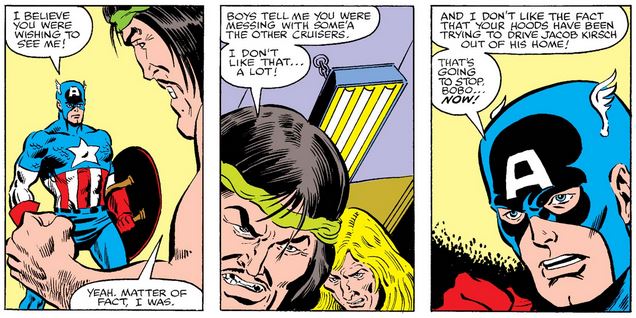 I usually appreciate a good reference to the struggle against the Nazis, but Cap may be reaching a bit here. (And you have to hand it to Bobo for referencing Fearless Fosdick, a parody of Dick Tracy who appeared in a comic-within-a-comic in Li’l Abner.) 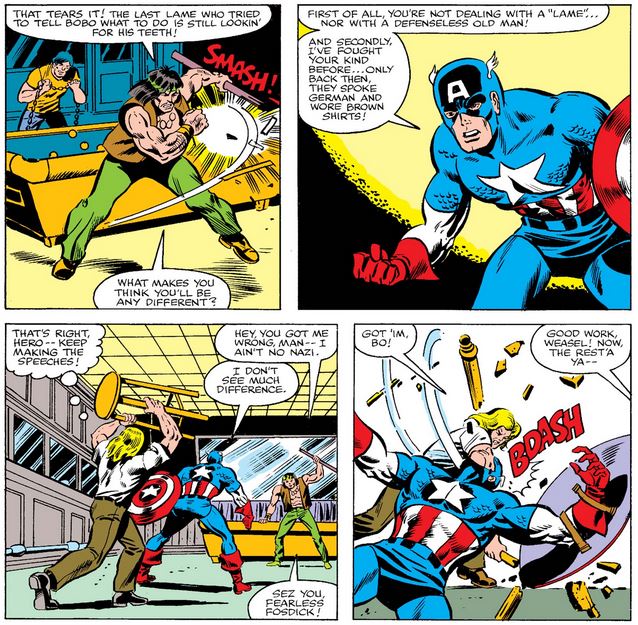 To be fair to Cap, though, Bobo does whip out the “just following orders” excuse. 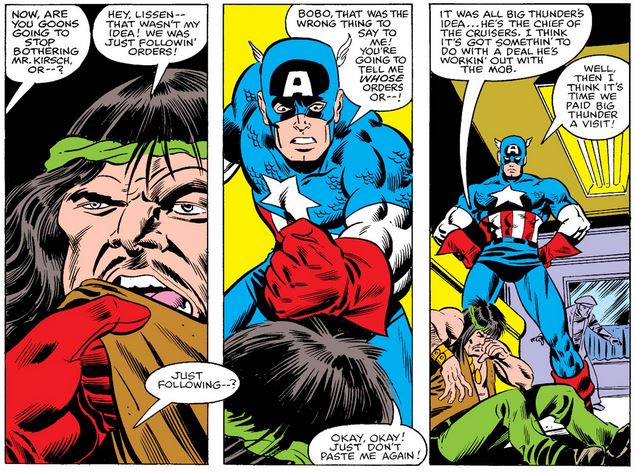 When Cap finally finds this Big Thunder character, he’s in the strange situation of having to throw a fight to make B.T. looks good and save Kirsch (even though he knows full well the deal is hardly ironclad). 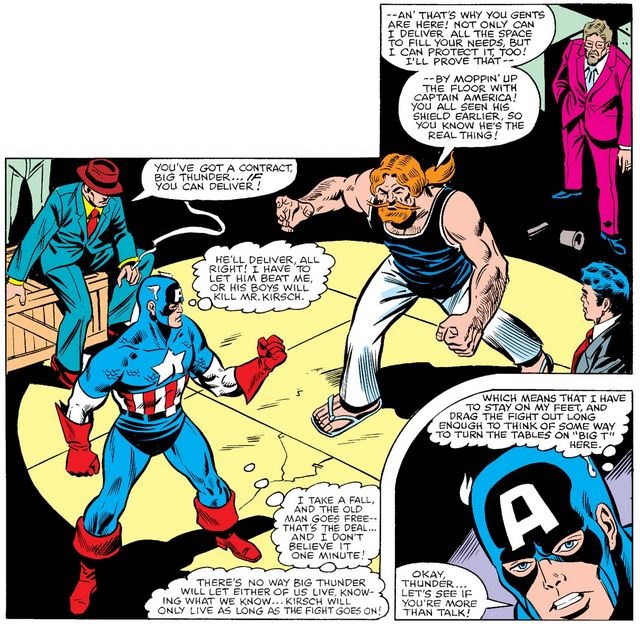 To no one’s surprise, Cap manages to defeat Big Thunder and save Kirsch, even promising to find him a real apartment. (Speaking of which, Cap finally returns to his new apartment in the next issue, before he meets a new guy around town, one who really really likes to punish people.)

Finally, we have a pair of panels from Fantastic Four Annual #14, by future super-team Marv Wolfman and George Pérez (New Teen Titans, Crisis on Infinite Earths, History of the DC Universe), in which Cap helps the military trying to punch through a force shield surrounding New York City (courtesy of the Salem Seven, mystical foes of Marvel’s first family.)

Well, OK then… I guess that’s one reason Cap doesn’t show up again in that story!