This issue serves as an aftermath to the six-issue storyline, which began in issue #231 and ended in the last issue, involving Captain America fighting against the white supremacist Grand Director (who ended up being someone from his past—see the last issue if you don’t know who), his National Force, and the man behind it all, Dr. Faustus. It also confirms the fate of Sharon Carter, who was brainwashed by Faustus into working with the National Force and disappeared in issue #233, and sets up a new status quo for Cap… I mean, Steve Rogers.

Before we get to all that, however, Cap has to deal with the fallout from his own brainwashing (in issue #234), during which he pledged allegiance to the National Front on television while holding up his shield with a swastika painted on it, as you can see in the opening splash to the current issue below. (It’s nice to see him publicly addressing this sort of thing, which we didn’t see happen when the Red Skull forced him to do something similar in Tales of Suspense #90-91, nor after his “conversion” to Hydra in the recent “Secret Empire” event.) 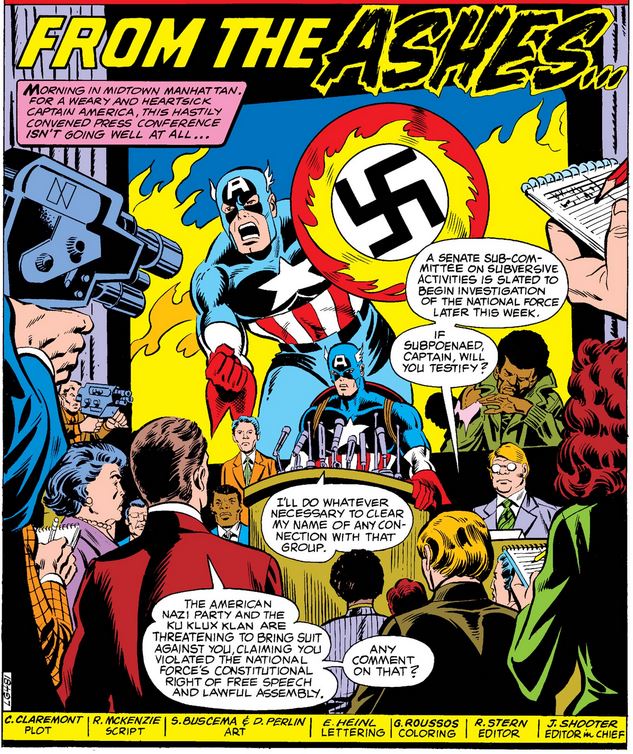 This lawsuit makes no sense for several reasons: We never saw Cap interfere with a National Force rally or speech, and even if he had, there would be cause to sue only if Cap were acting as a government agent (which, to be fair, is normally left vague).

In his answer, Cap alludes to the first point, correctly arguing that he resisted the National Front’s violence, not their speech.

That last part suggests that the Klan and the Nazis may think that by recanting his coerced statements, Cap violated the National Front’s free speech rights, which is… odd, to say the least.

As Peter Parker lends his pal a friendly thought, Cap is asked a question he has asked himself many times since being rescued from the ice years ago.

Another reporter presses him on whether he plans to retire, to which he replies “no comment”—perhaps thanks to his friend Matt Murdock, who helped him fight Faustus over the last three issues—before leaving the press conference, only to run into a reporter with something to offer him.

Ms. Burns leads him into her newsvan where she shows him some tape, and his reaction is well portrayed by the artists (Sal Buscema, Don Perlin, and George Roussos).

From this point on, Sharon Carter is presumed dead, not to re-emerge, alive and kicking, until 1995 (!) in Captain America #446; since then, she has remained a significant and constant presence in Cap’s life (although she would be presumed dead once more).

Good friend that he is, Sam Wilson, aka the Falcon, looks for Cap to see how he is, but finds his apartment deserted, as he tells the Avengers. (And guess who isn’t on the group texts!) 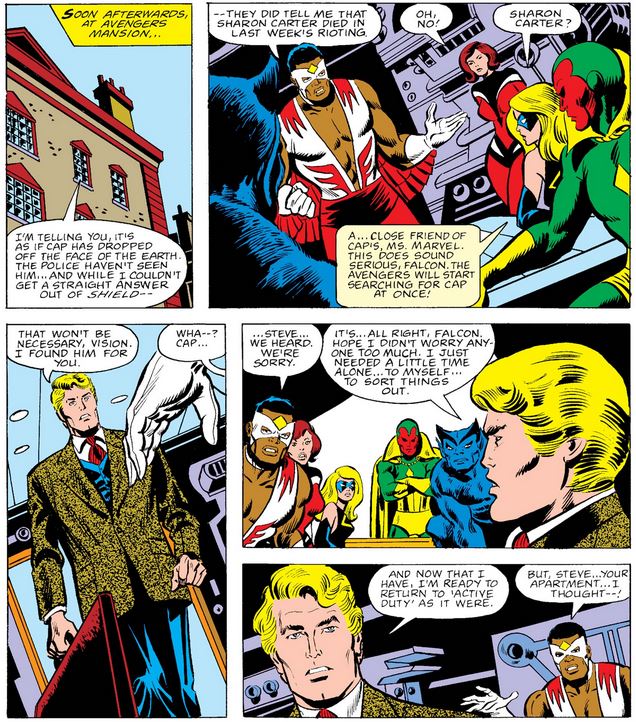 But never mind… hey Steve, what’s the portfolio for?

Finally, Steve is embracing his artistic side, which we’ll see much more of in the near future (including a stint working for Marvel Comics).

Plus… new digs, which will be his home for quite a while as well.

It seems the recent events, capped off by the press conference, not only made Cap question his relevance as the Sentinel of Liberty, but also renewed his need for a life as Steve Rogers, an intermittent theme itself for many years, but never taken as seriously as he does above—except perhaps his very short retirement in Tales of Suspense #95-96. (I do find it a little uncomfortable that he’s looking forward to getting married and starting a family so soon after he learns of Sharon’s death, though.) 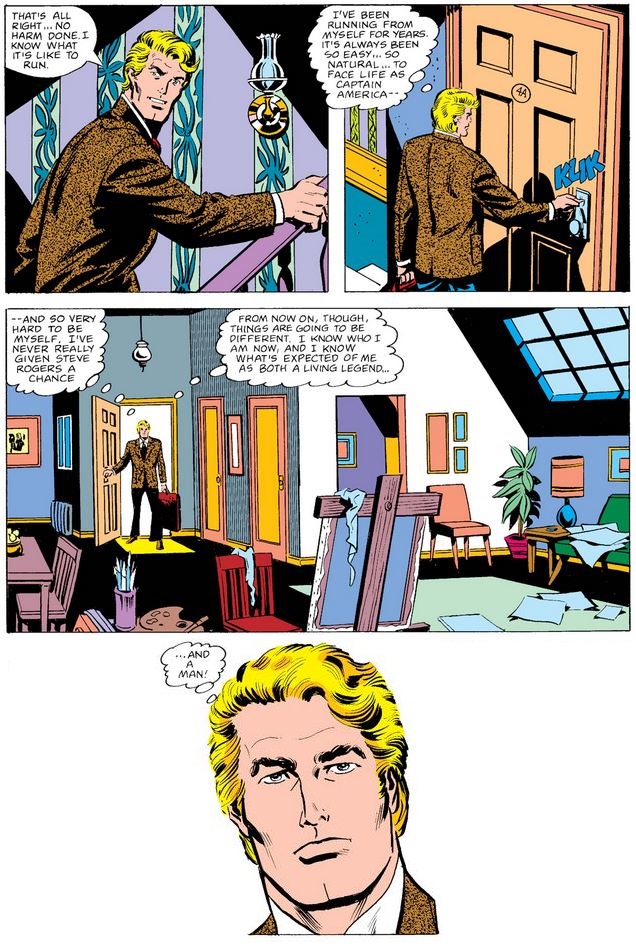 It’s not clear (to me, at least) what led to this revelation, but it’s good to see Cap trying to introduce some balance into his life. (In particular, I wonder if “I know who I am now” refers to the “facts” he learned about his early life before Project Rebirth, which will be recanted fairly soon, or some more general self-realization.)

When Steve meets his first neighbor, he shows that he doesn’t talk to new people very often.

“Things are going reasonably well, I suppose” is my new “fine.” (And the “to America” is both on point and over the top!) Despite Steve’s awkwardness, Josh welcomes him all the same and expresses exactly the neighborly sentiment Steve needs to hear right now.

When Steve meets Anna Kapplebaum, his legendary recall is triggered. 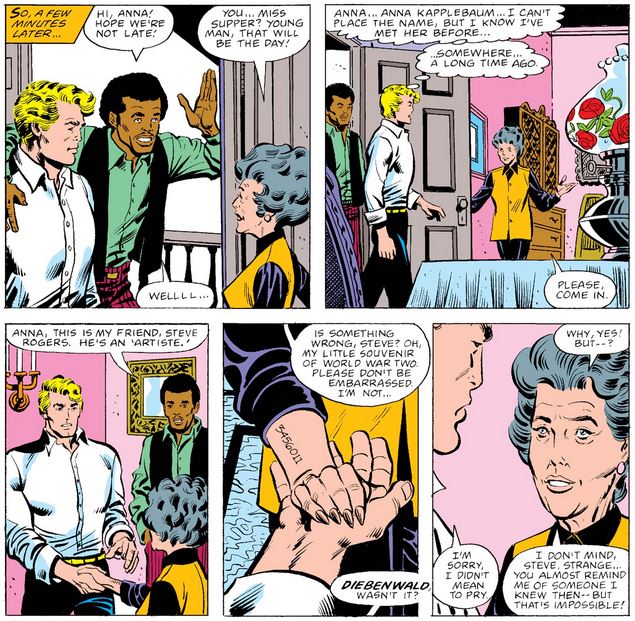 Anna then tells her harrowing tale of being a little girl in 1940s Germany, having been sent to the (fictional) Diebenwald death camp with her parents, whom she watched the Nazis beat to death in front of her. She was about to shoot herself when a man arrived on a motorcycle…

Cap embraces young Anna and tries to comfort her, but then he sees the rest of the prisoners, and his face echoes the existential shock expressed by the GI behind him. 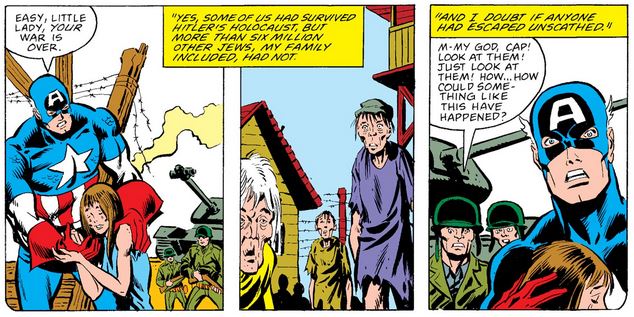 When Steve returns to his own apartment, his thoughts connect the loss of Sharon to that of Bucky before reaffirming the importance of continuing as Captain America, answering that pesky reporter’s question from the press conference at the beginning of the issue.

Steve manages to get to sleep, but makes the mistake of answering his phone—and gets a chance to give his old buddy Nick Fury an earful about the way S.H.I.E.L.D. treated him in issue #231.

But Nick knows how to push Cap’s buttons—the magic word, apparently, is “duty”—and even though he agrees to suit up for Nick, Cap promises himself that he will find balance between serving as Captain America and living as Steve Rogers.

Will he, though? Wait and see!