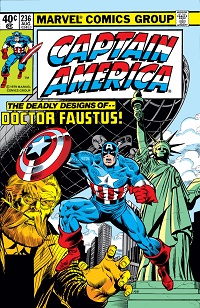 This issue of Captain America marks the end of the story about the National Front that began in issue #231, and finally reveals the identity of its leader, the Grand Director. It also finishes Daredevil’s three-issue guest appearance, including the answer to the most pressing question of 1979: Can DD actually fly a plane? The answer will… not surprise you, probably. Plus, Cap has a short appearance in the Falcon’s first full-length solo tale (in Marvel Premiere, an anthology series of the day that previously featured the Liberty Legion in a crossover with Invaders).

The last time we saw Cap, he was jumping off a plane onto a dirigible flown by Dr. Faustus and the Grand Director, carrying Faustus’s mind-control gas—but the plane lurched at the last moment and threw Cap off course. (The fact that Daredevil was flying the plane had absolutely nothing to do it, no-sir-ee.) 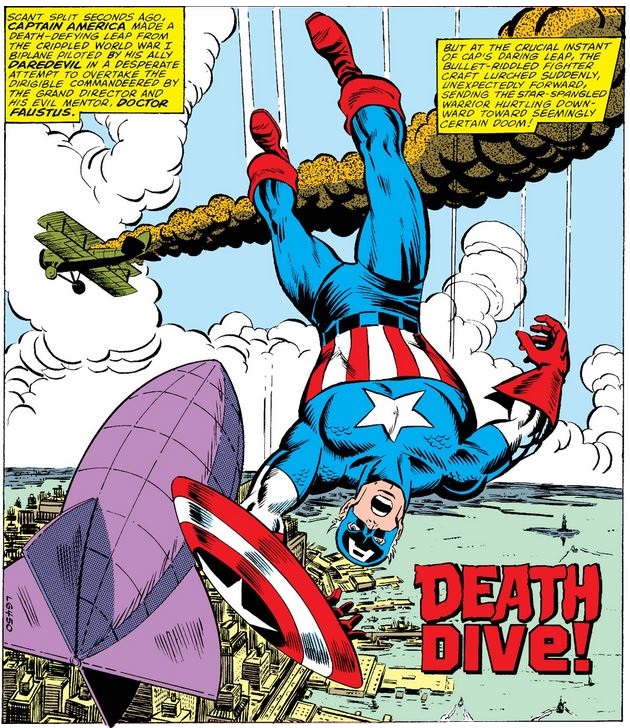 Of course, DD blames it on the plane before he turns into an aeronautical acrobat and ends up stalling the engine. (Obviously a bad plane.) 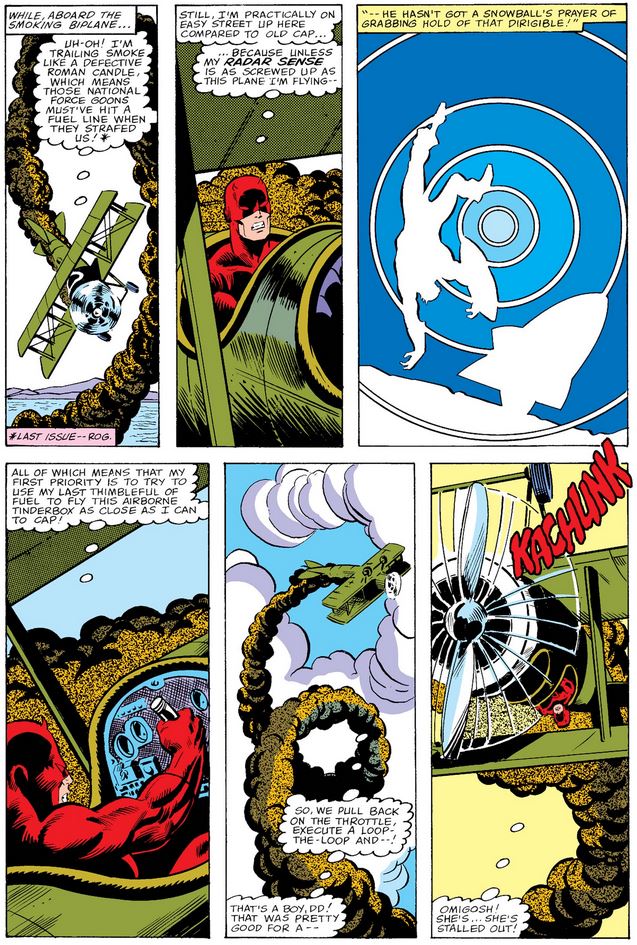 Meanwhile, Cap does a better job flying… and he doesn’t even have a plane! Just excellent coordination, amazing resilience… and at least some skydiving experience. 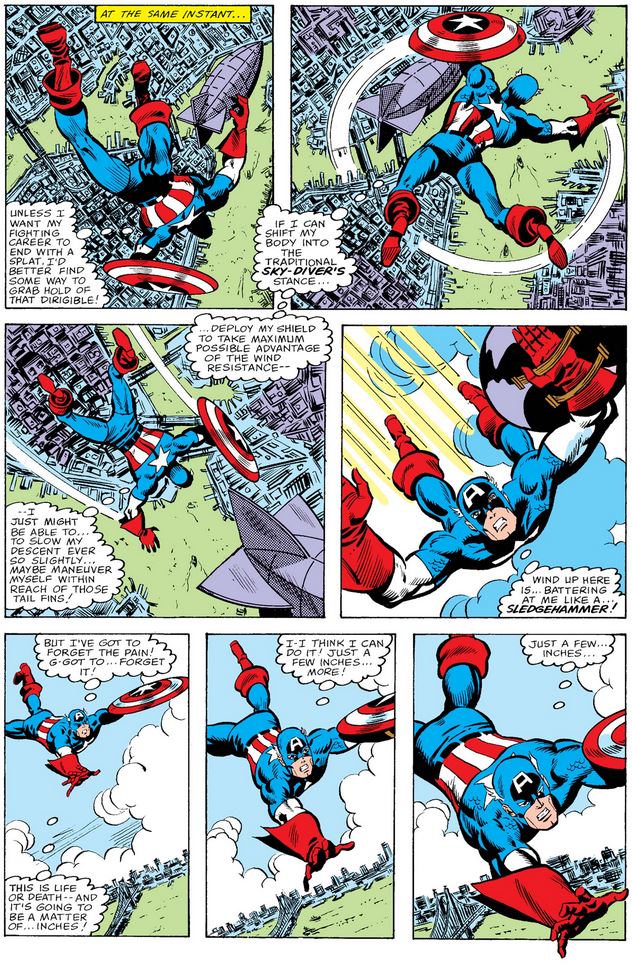 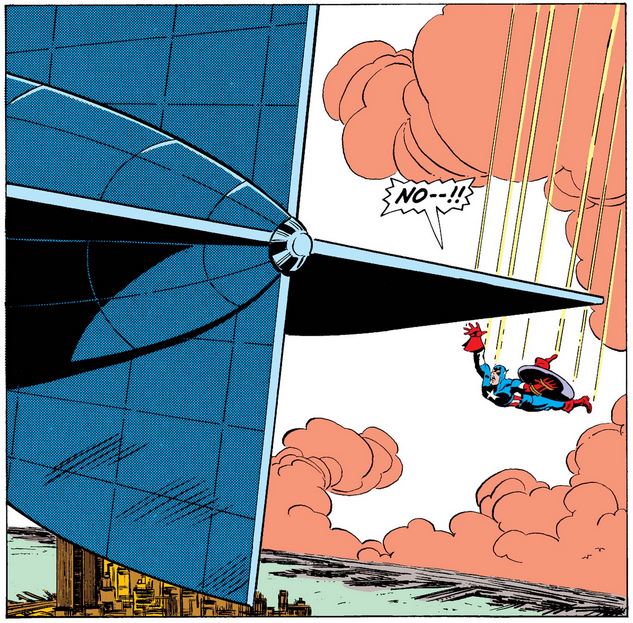 Daredevil’s still flying that plane, although it’s more of a glider by this point, but the important thing is that he’s trying to help Cap, specifically by sharing his toys. 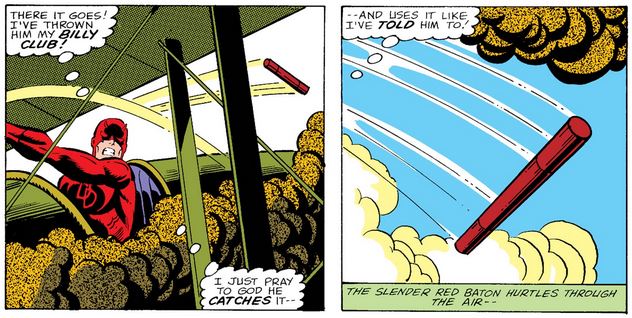 What’s this “like I’ve told him to”? The same way Cap told you how to fly a plane? (We’re in trouble.) 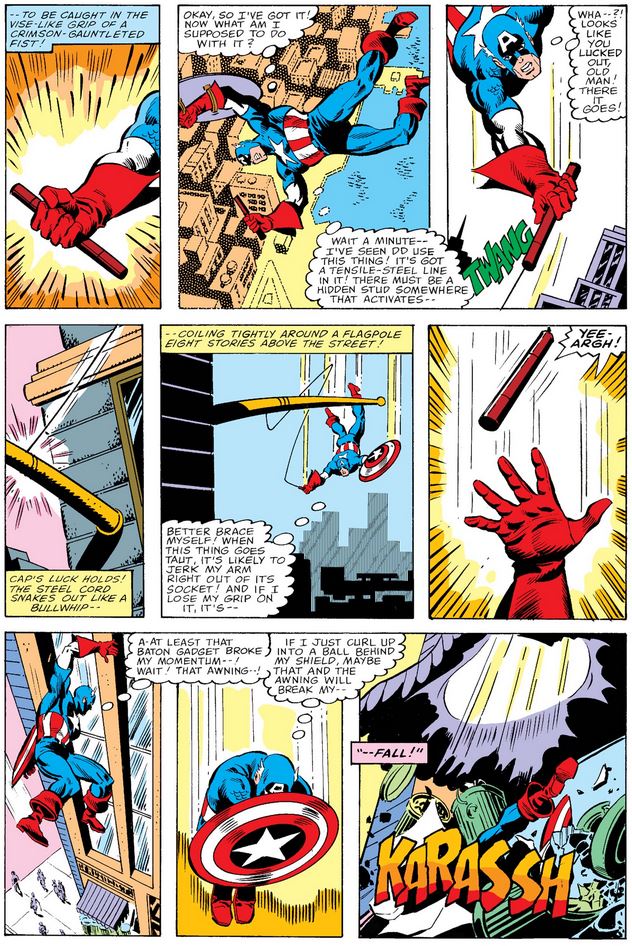 I really like how Cap acknowledges what will happen when the line is fully extended—after all, it’s not a bungee cord—as well as his inability to keep his grip and his quick thinking before he goes through the awning. None of these are ordinary situations for Cap, but they still pale in comparison to Daredevil operating an aircraft.

Let’s check on our erstwhile pilot, shall we? (Remember that Cap doesn’t know at this point that Daredevil is blind.) 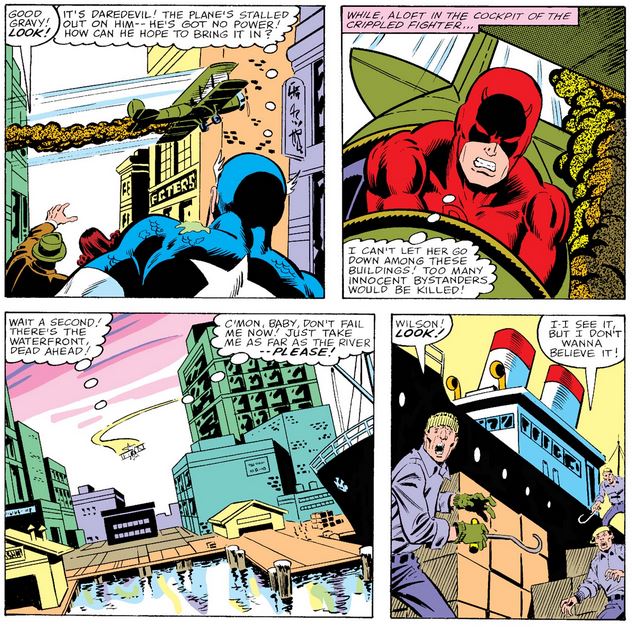 He doesn’t make it to the water, but to his credit, Daredevil does manage to guide the plane to the ground and into a stack of crates, which totals it. (Ironically, his radar sense surely did him much more good once he was flying among the city buildings than high up in the air.)

And just like Peggy Carter at the end of issue #231, Daredevil managed to get clear of the crash, saving Cap yet another devastating loss. (This is his book, after all.)

Back in the blimp, Faustus is explaining his foolproof plan to Peggy Carter, who also learns (alongside the reader) the true identity of the Grand Director.

That’s right… it’s the 1950s Cap! As Faustus explains, after being defeated by the “real” Cap (with the help of Sharon Carter and the Falcon) in issue #156, the 1950s Cap and Bucky were funneled by the evil Corporation into the hands of Faustus, who used his gas to increase their psychotic hatred and complete obedience. 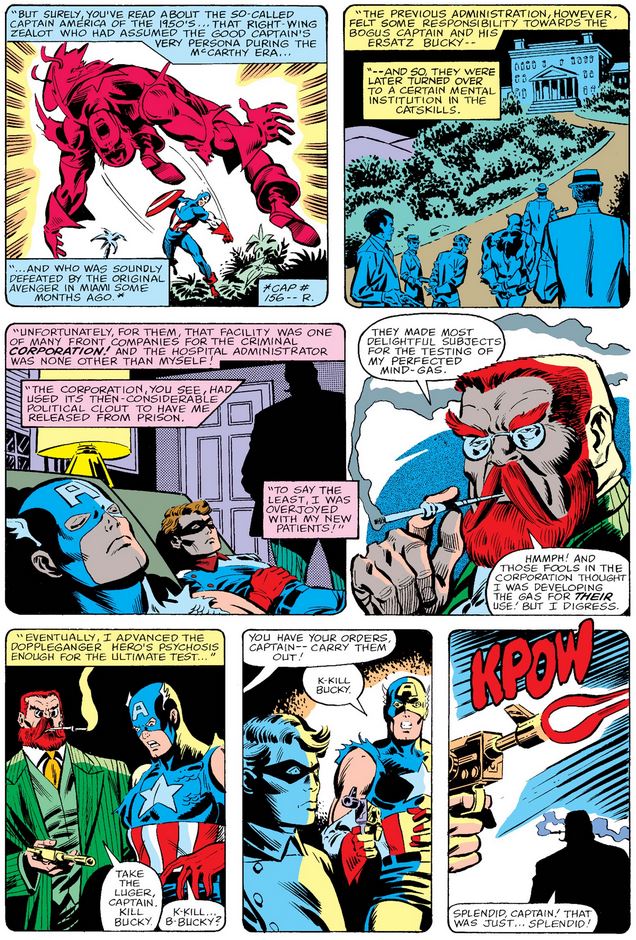 I don’t think it’s spoiling anything to tell you that this murder was later revealed to be staged; the 1950s Bucky, né Jack Monroe, will return in 1983’s Captain America #281 and will play a significant role in future stories.

Meanwhile, Cap and Daredevil pursue the dirigible in an Avengers quinjet, and they’ve shown they’ve learned nothing from the earlier part of the issue, as DD appears to be flying again, and Cap prepares to jump onto the blimp, cracked ribs and all. 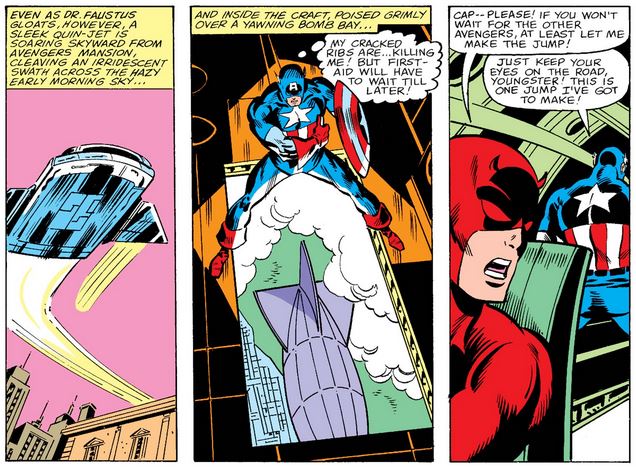 (And I doubt Daredevil prefers “youngster” to “son,” which he objected to in the last issue!)

Happily for us, Cap lands safely on the blimp, and has several deep thoughts in the process, including pondering the fate of Sharon Carter and his role as the Sentinel of Liberty in the modern world. 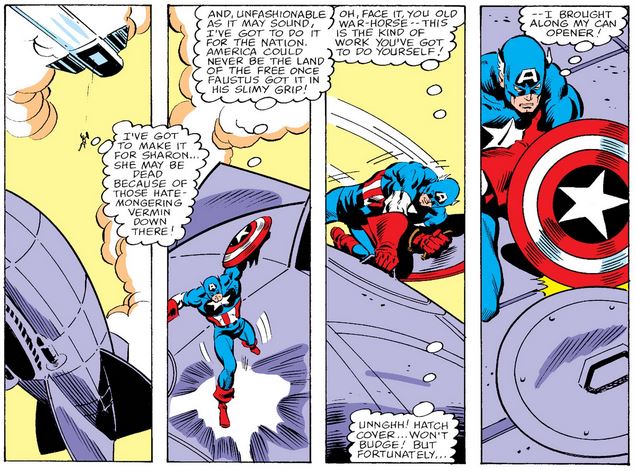 As always, Peggy calls ’em as she sees ’em, setting up Cap’s entrance perfectly (almost like they planned it).

Faustus orders the 1950s Cap to “do something,” and he does… he triggers a device on his belt that sets him aflame, as other National Force personnel did earlier in the story, possibly including Sharon. (Faustus should have been more specific.) Cap’s muted response is appropriate, given the fact that he’s effectively watching himself die.

Like his young partner, the 1950s Cap, né William Burnside, does not die here, but it will be a long time before we see him again—in 2008’s Captain America (vol. 5) #37 (still being manipulated by Faustus).

Peggy shows herself to always be a fighter at heart, relieving Faustus of his hostage… 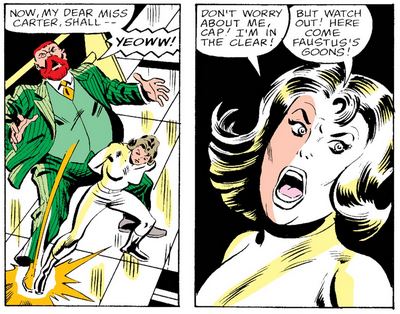 …and freeing Cap to go all out in wiping out the rest of the National Force on the blimp, struggling against his pain and exhaustion but nonetheless having the presence of mind to make sure no more of them commit suicide as the 1950s Cap apparently did.

When Cap is done, he introduces his shield to Faustus’s wrist, and reveals another reason he kept the National Force thugs alive. (Now that’s something that Daredevil, secretly lawyer Matt Murdock, might have told him.)

Speaking of Daredevil, he’s waiting with the quinjet when the blimp plunges into the water, and Cap has a little of the weight of the last six issues lifted by the sight of his true love. 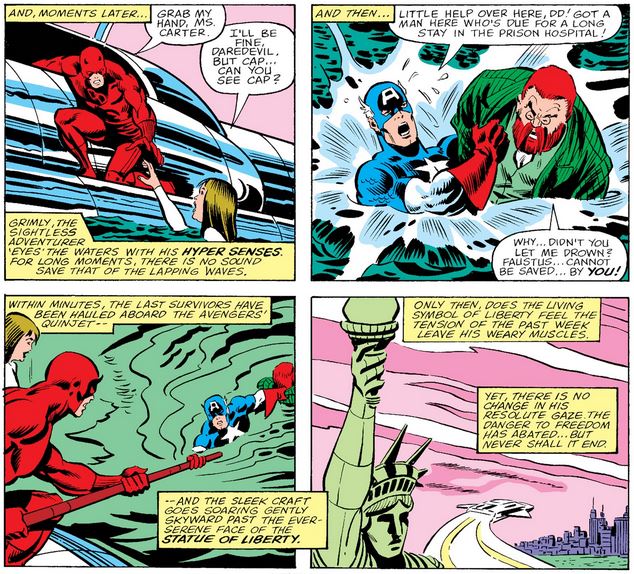 We’ll see the aftermath of this story in the next issue of Captain America, but over in Marvel Premiere #49, Sam Wilson, aka the Falcon, is enjoying his first full-length solo story, but not without his former partner, who is always “on your left.”

Sam is investigating the murder of Sigjid Roskoff, a “Bodavian” writer and philosopher who had been critical of both the United States and Captain America, especially for using “unpatriotic” means like violence in pursuit of “patriotic” ends—something I wish had been elaborated more in the story, but it is Sam’s song, after all! Sam was accused in the press of not trying hard enough to protect Roskoff, but Cap urges him to forget what they say (something he would elaborate on to Spider-Man during the “Civil War” in most has become one of Cap’s most famous speeches). 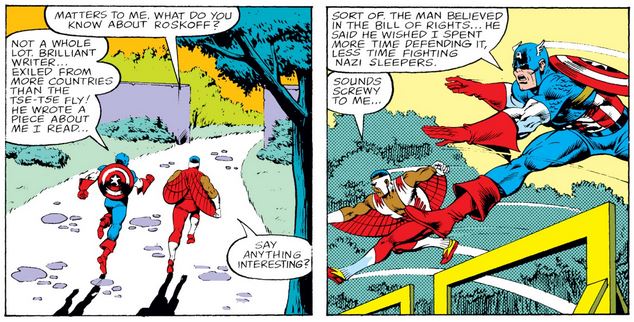 Cap offers a nice sympathetic thought as Sam leaves to solve the mystery of Roskoff’s death… read it for yourself at the links below.