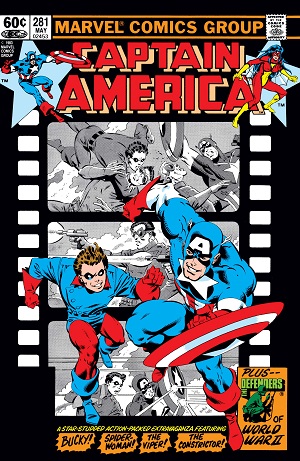 With this issue we begin a three-part storyline featuring Captain America fighting the menace of Viper—originally known as Madame Hydra when introduced in issue #110—and the return of an old enemy who wants to turn over a new leaf, which is the more important aspect of these issues as far as we’re concerned. (Oh, and then there’s Spider-Woman, right there on the cover, like she’s a guest-star in the book. She appears very little in these issues, serving more as a link to her own book and her battle with Viper there.)

We open with our favorite romantic couple, Steve Rogers and Bernie Rosenthal, watching old newsreels, including one from 1941 featuring Captain America and Bucky.

Predictably, this only saddens Steve, reminding him once again of the loss of his partner and friend. On the bright side, he has recently become aware of his tendency to wallow, since his childhood friend Arnie Roth called him on it in issue #279. 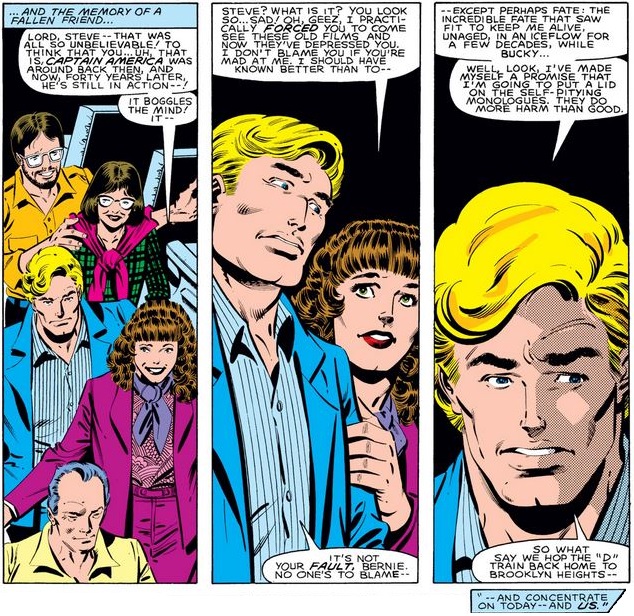 But there was someone else in that theater who was keenly interested in the newsreel and the legacy of Captain America and Bucky.

Gee, it kinda looks like… nah, couldn’t be, way too soon. (You’ll have to wait another two decades for him.)

This is much the same reaction Arnie Roth had to seeing Steve for the first time back in issue #270, but this gawker is a much more recent acquaintance. Don’t worry, we’ll learn his identity very soon… because he seems to have followed our lovebirds home, where Bernie is contemplating the future as an Avenger.

Steve is too distracted to appreciate Bernie’s humor—he can only think of what she might have done with the shapeshifting creature Primus during the short time he took Steve’s place (in issues #278 and #279). 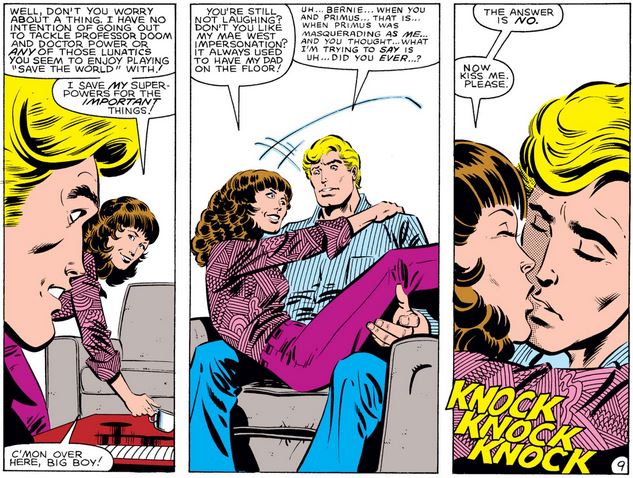 I find this a very interesting admission on Steve’s part, a glimpse of jealousy that reveals the depth of his feelings for Bernie. (Even if Primus had tried something, I’m sure Bernie would have gotten wise when he said everything was “five by five.”)

After the knock on the door, Bernie shows a little jealousy herself at the prospect of S.H.I.E.L.D. Agent Gail Runciter showing up again to whisk Cap away on a mission, but Steve remembers (as do we) what happened last night time they met, so he dismisses the thought… and then forgets it altogether after he opens the door to a ghost.

Apparently still upset after the newsreel screening earlier, Steve reacts badly… very badly… as he assumes the young man is a devious impostor. (To be fair, this does happen on occasion.)

Bucky isn’t lying, although he could have saved everyone a lot of trouble if he’d elaborated a bit. 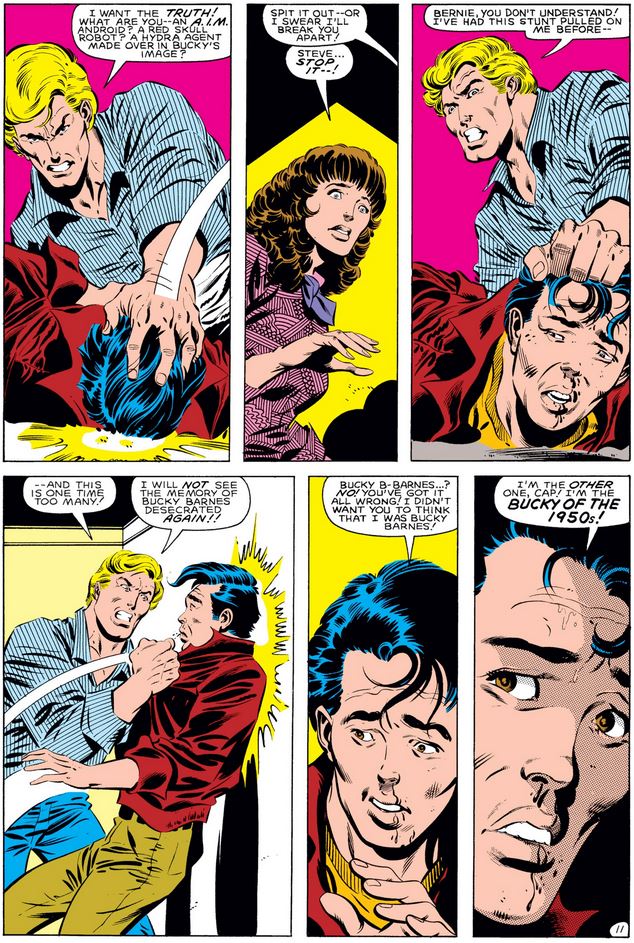 “Oh, you thought I meant Bucky Barnes when I said I was Bucky. Ha, I can see that now. My bad!”

We know the history that Bucky 2.0 recounts below (from issues #155 and #236), but it’s interesting to hear it from his point of view. 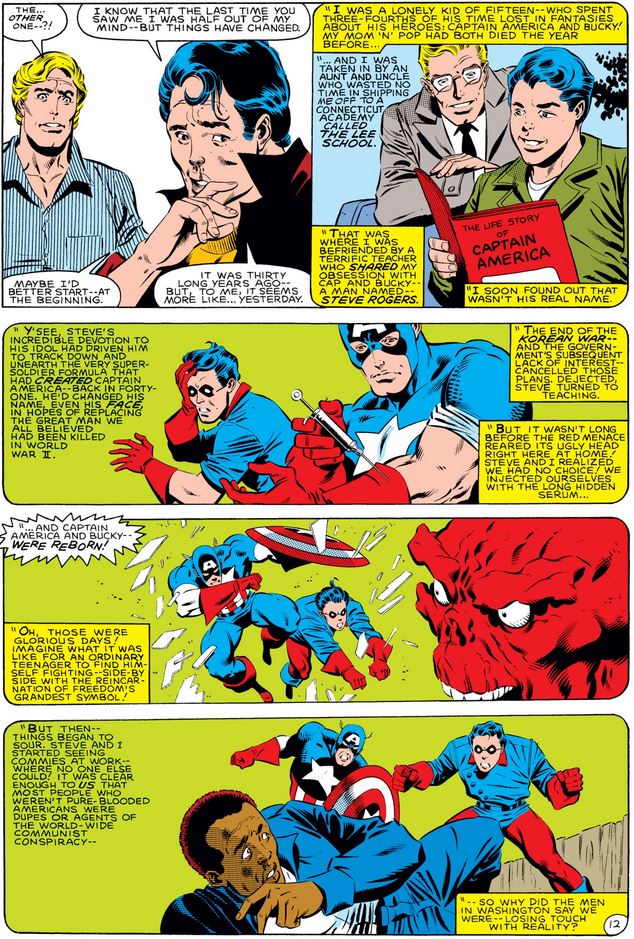 Of course, we all thought this Bucky died in issue #236, but we learn the truth here. (Gee, what other Bucky might not really be dead… hmm…)

(Actually, the 50s Cap is not dead either… but he takes even longer to come back than the O.G. Bucky.)

Steve forgets his anger, apologizes, and finds compassion for a young “man out of time” like himself, not so long ago. 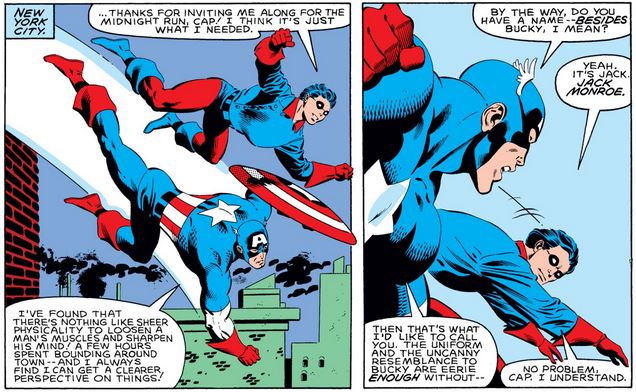 …with Cap catching on just in time. Unfortunately, Jack’s battle skills are a bit rusty, and he rushes into action in an attempt to impress his new partner.

Because it is only the Constrictor, though, Cap handles him easily… maybe too easily.

While Constrictor keeps Cap occupied, Viper’s men shoot our hero in the back and abscond with him…

…leaving Jack wondering how he could have screwed up so badly on his very first mission. (Maybe he just needs a new identity… come back for the next issue to see!)