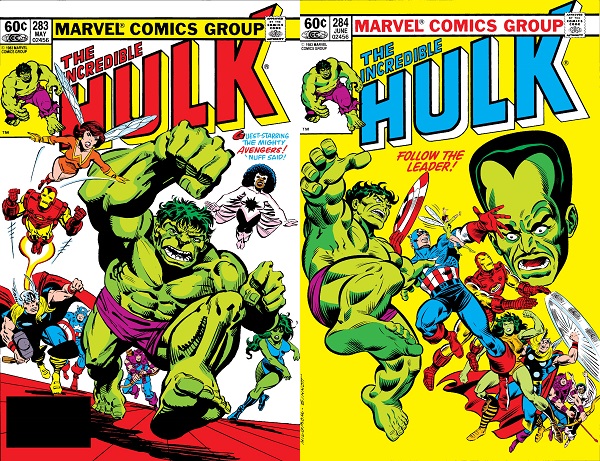 These four issues of The Incredible Hulk, in which the Green Goliath, fully under the control of Bruce Banner at this point, battles his foe the Leader. The Avengers feature in the last two issues (shown above), in which Captain America has an opportunity to show leadership (in space!) and even travels through time and gets to see Bucky again (although he doesn’t completely realize it, sadly).

In issue #281, after borrowing a quinjet from his former teammates while refusing their help, Bruce Banner takes off to the Leader’s space station.

As the Avengers watch Banner fly away, they each share their sentiments, and you have to wonder if Tony’s filing away the concept of sending the Hulk in case it might be useful in the future. (And yes, the role of Iron Man is still played by Tony Stark in this story, despite events in his own book at this time.)

Don’t worry, Jen, you’re involved in the next issue, #282, by which time Banner has returned to Earth (unsuccessfully) and is meeting with you in Avengers Mansion when a blast from the past returns.

…only to discover that it was all a set-up to show that he needs to use Hulk’s rage as well as Banner’s brains if he hopes to defeat the Leader.

“…and later, we’ll have a talk about this whole ruse, dear cousin. Hulk is not amused.”

In issue #283, Hulk and the Avengers head back into space…

…where they attack the Leader’s space station, with Cap taking charge of strategy on behalf of team leader the Wasp (as she often asks him to, making good use of her team member’s skills).

The Avengers fight a swarm of rubbery androids—just like Reed Richards, without the intelligence but with twice the charm—against whom the mighty Mjolnir does no good…

…but at least it doesn’t get caught. (Oops.) Unfortunately, Hawkeye doesn’t fare any better.

Captain Marvel uses her energy power to make the androids brittle, making the boys’ toys effective once more. (Everybody smash!)

Once inside the space station, our heroes learn that the Leader has traveled back in time to create gamma-infused creatures that he can control, and suddenly the Avengers vanish, lost in time themselves, with Hulk and She-Hulk following close behind.

In issue #284, the Hulks learn that Cap was sent to a very convenient place and point in time… 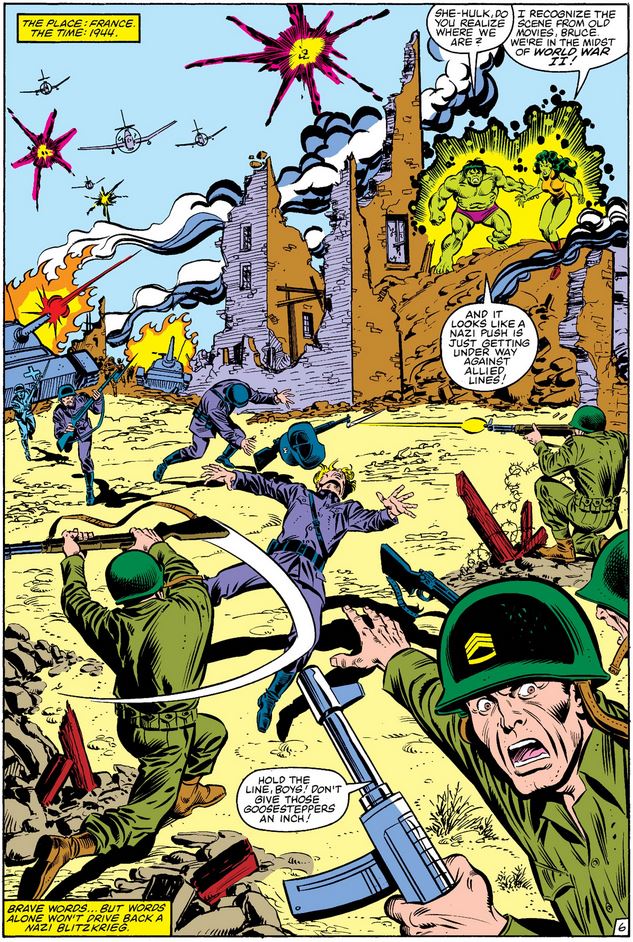 …but our verdant friends can’t be sure which Cap they’re looking at, especially seeing that Bucky is beside him. (If it is “our” Cap, he definitely falls into old patterns very easily, doesn’t he?)

The Hulks join the fight and Cap seems to recognize them, suggesting that he is the Cap of 1983, not 1944, and they start to craft a way out of this temporal mess. 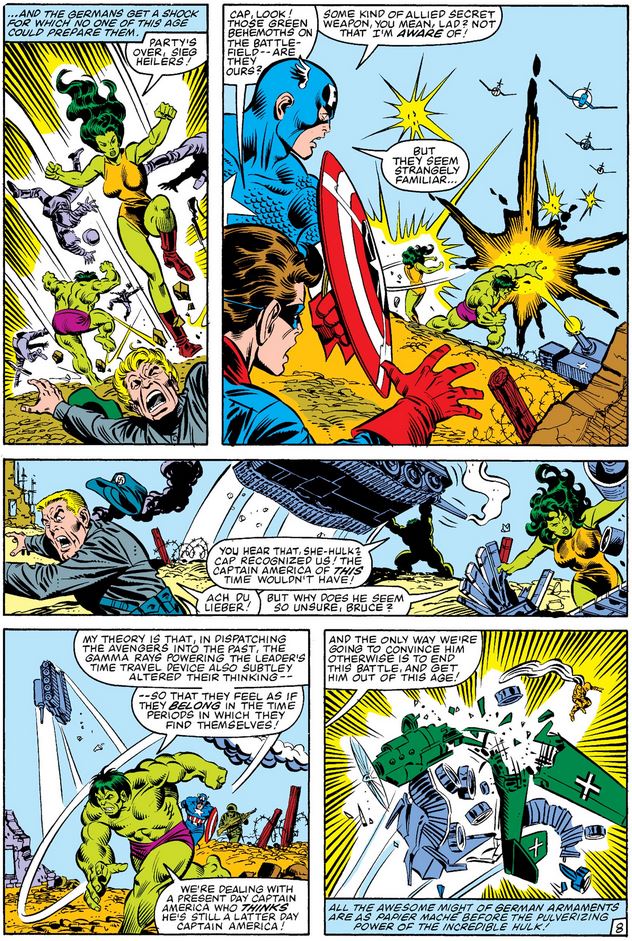 The Hulks begin to convince Cap of what’s going on, and an exploding Nazi bomb masks their disappearance into the time-stream… giving young Bucky quite the fright until his “real” partner returns.

Cap and the Hulks next find themselves in the days of Robin Hood, where Hawkeye has found himself at homes among the archers, and Iron Man among the knights (and not for the first time).

While the Hulks deal with Iron Man, Cap talks some sense into Hawkeye… and it works?! 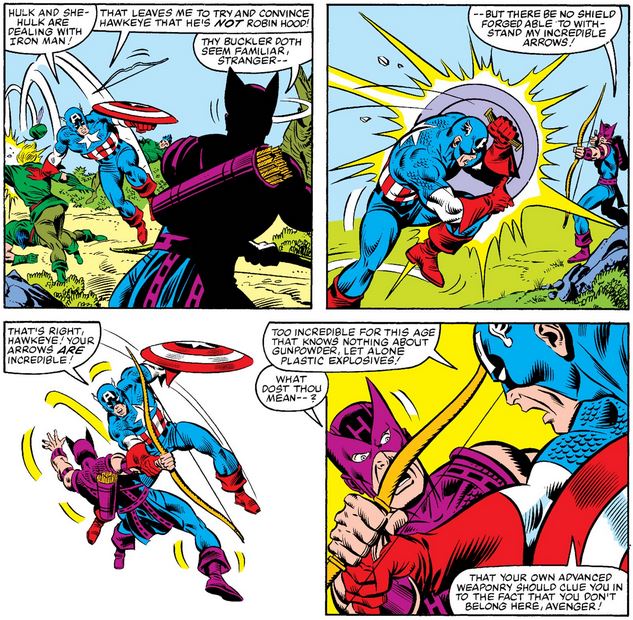 Eventually, the collected heroes find themselves facing the Leader in prehistoric times, and… well, I won’t spoil the ending for you!

All collected in The Incredible Hulk: Pardoned.