This issue continues Captain America’s battle with Viper and Constrictor alongside Jack Monroe, the Bucky from the 1950s, who reappeared in the last issue after having presumably been killed by his former partner in issue #236. Not only is Jack alive, but in this issue he once again adopts someone else’s identity, as seen on the cover to the right.

When we last saw Cap, he had been defeated and abducted by Viper’s men, and the opening of the present issue suggests that he just might have been drugged. (To be fair, though, being confronted by “a” Bucky last issue must have been pretty trippy.)

Nonetheless, that doesn’t compare to what Cap “sees” next.

This is actually the first time we’ve “seen” Joseph Rogers, who is shown very seldom in the comics, for the reason Cap states above.

Cap soon comes to, and immediately asks about Jack. 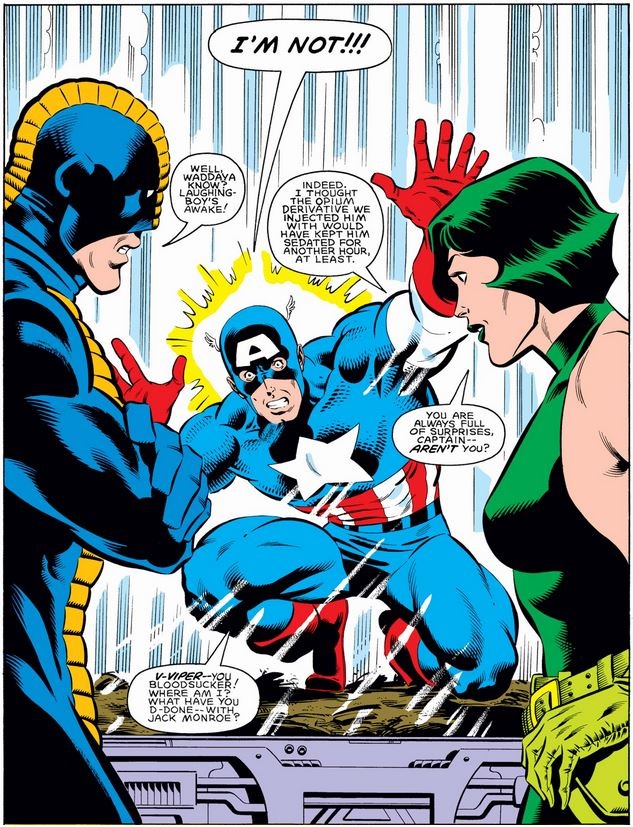 Despite his compromised state, he retains his legendary defiance…

…even taking a chance to escape, never giving up, but he is again subdued by Constrictor (who, unbeknownst to Cap, is beginning to have second thoughts about his alliance with Viper). 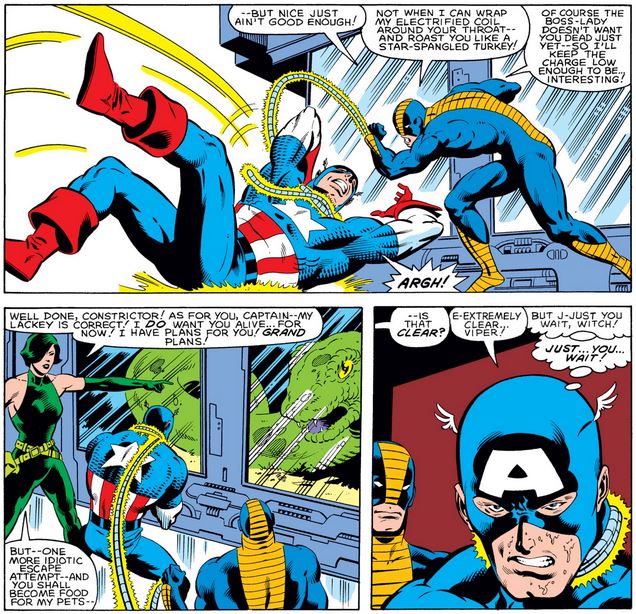 This scene is an extended display of Cap’s resilience, expressed both internally (as above) and verbally (as below).

We get a quick glimpse of our favorite S.H.I.E.L.D. agent, Gail Runciter, operating undercover as one of Viper’s forces, before our attention turns to young Jack, unloading to Bernie, who is sympathetic not refuses to coddle him.

Apparently either Bernie or Jack now has transportation powers, because they somehow make it from Brooklyn Heights to Harlem in just thirty minutes… But never mind, it’s always great to see Sam Wilson, although he is less than thrilled to see Jack, whom he remembers as half of the racist Cap-and-Bucky team from the 50s he fought in issues #155 and #156.

It probably took more than thirty minutes to get up the S.H.I.E.L.D. helicarrier, but once there, they get an update from Runciter, who risks everything for the man she loves but knows she can never have. (No, silly reader, not Nick… check out Marvel Team-Up #128 if you don’t know.)

Nick fills Bernie in on the situation with Viper, but makes the mistake of criticizing the man she loves. 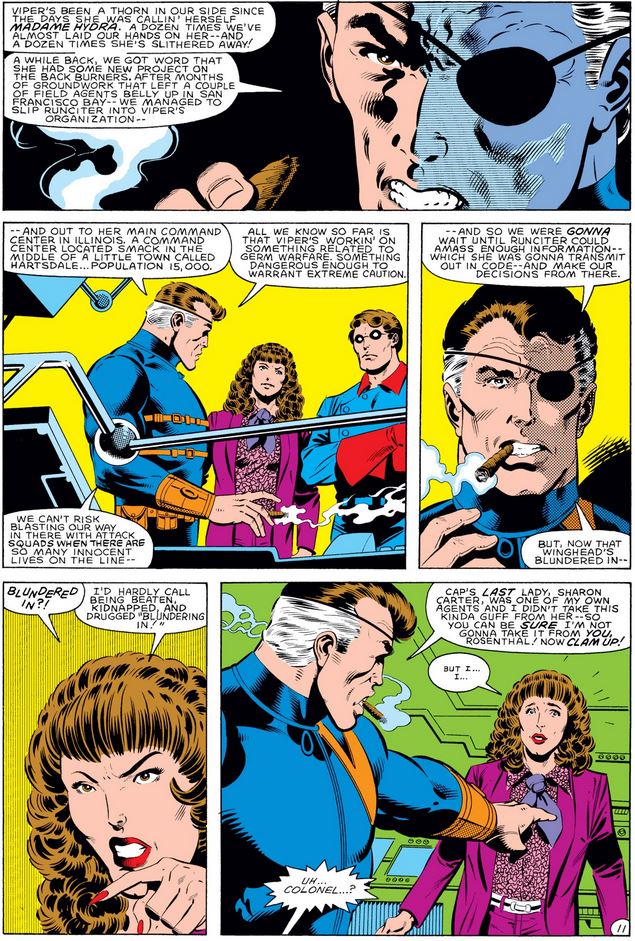 The battle royale is prevented by Spider-Woman, who unmutes herself on Zoom to tell Nick she can’t help with Viper, but in the process gives Jack another idea, the culmination of which we’ll see soon… after Cap goes to dreamland once again.

At least the Joseph Rogers of his dreams is warmly encouraging, unlike the more disturbing depiction we get many years later in Captain America (vol. 7) #1. Unfortunately, though, it doesn’t last, as Viper outlines her plans to reveal the dark underbelly of American society… 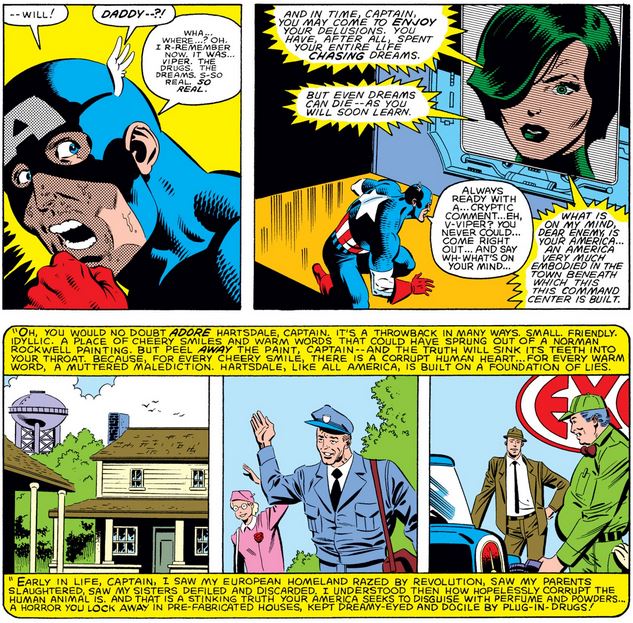 …by subjecting them to a more deadly version of the bubonic plague responsible for the Black Death of the 14th century. (Were you expecting something more deviously ideological? Me too.) Needless to say (or show), Cap is as determined as ever to stop her—and so is Constrictor, who was just in it for the bucks (and a spot of revenge against his star-spangled foe).

Meanwhile, Dum-Dum Dugan and Jack Monroe are on their way to Viper’s base, the latter sporting duds we haven’t seen since issue #183, and for a very specific reason, explained by Dugan.

Jack parachutes to the ground and is immediately attacked by Viper’s men, but the one-man cavalry soon arrives, lifting the young man’s spirits and giving him new purpose. 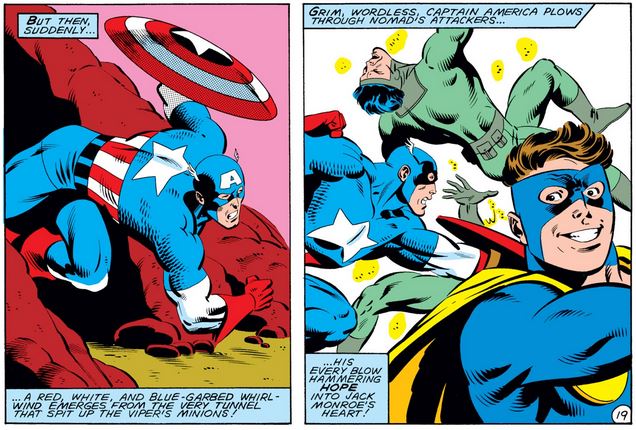 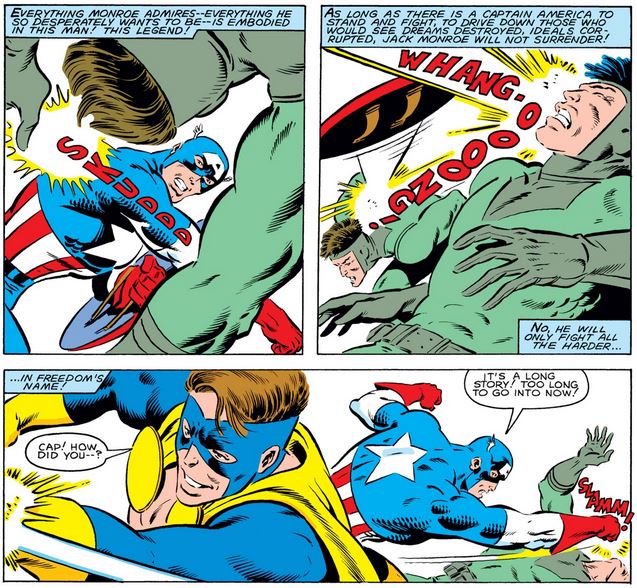 …but unfortunately he does not act on those suspicions when he had a chance. 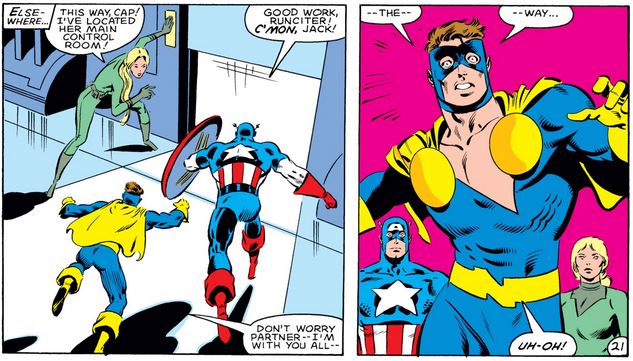 Come back next time for the exciting conclusion… maybe Gail will get her man at last?