This issue concludes the three-part story of Captain America’s battle against Viper and Constrictor, fighting alongside Jack Monroe, originally the Bucky of the 1950s but now operating as Nomad (Cap’s brief identity after the Secret Empire episode), as well as S.H.I.E.L.D. Agent Gail Runciter, looking an awful lot like Sharon Carter in the issue and on the cover. (This will be addressed at the end of this post.)

Like the last issue, this one opens in Cap’s dreamworld, where little Steve enjoys a meal with his parents, now long deceased…

…but after an encouraging start—that nonetheless touches on his father’s alcoholism, which is also mentioned in Iron Man #172 this month—this dream soon turns dark, as the Viper’s influence becomes apparent.

After Viper comes upon Constrictor “restraining” a writhing Cap—he was actually trying to rouse the hero after having turned against her—she explains her background with both Cap and “Nomad,” which only hardens Constrictor’s resolve to oppose her plan, revealed in the last issue, to unleash a deadly plague on the world.

Constrictor continues to rebel against his boss, realizing that the world’s only hope at this point may be the Sentinel of Liberty. 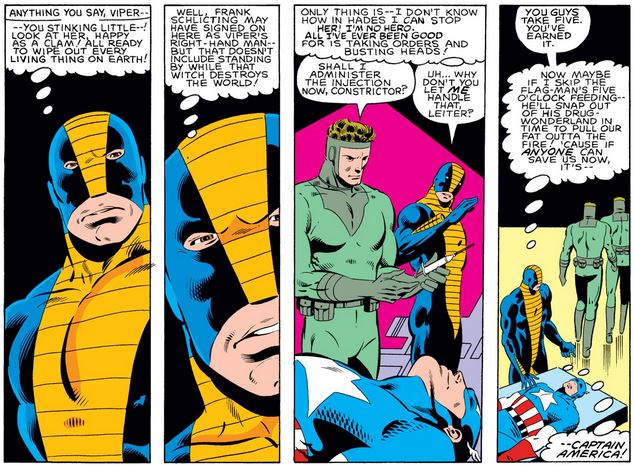 We’ll see if Constrictor’s reduction of dosage has any effect when Viper puts her plan into motion, starting with a wholesome parade through the small town she’s hiding in, starring a bedazzled Cap, Nomad, and Agent Runciter. 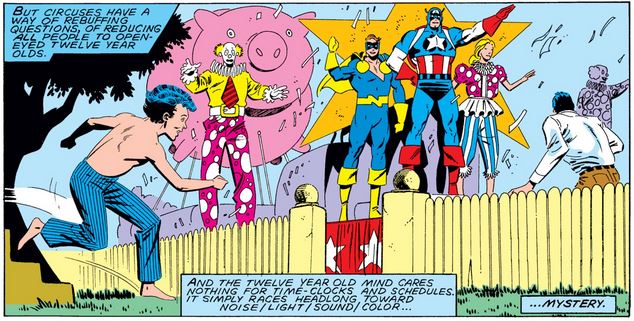 Underneath the plastered smile, Cap continues to have drug-influenced hallucinations…

…which, thanks to his subconscious, urge him into action (albeit rather cruelly).

Shocked into lucidity—aided by Constrictor’s earlier actions—Cap springs into action, his resolve unaffected by the medications.

Cap looks skyward to the balloons carrying the deadly virus… in the form of snake venom, no less… to be delivered by snakes, of course. (Subtle, Viper is not.) Note how he starts to creep toward self-doubt and fatalism, only to catch himself and realize it’s just the drugs talking.

Cap realizes Dum-Dum is not in good shape, and regrets that he can’t do more for him with so many other lives at stake… but luckily, Constrictor chooses that moment to announce he’s switching teams.

To his credit, Constrictor tries his best and gives his all…

…but in the end, it’s up to Cap to save the day, although he’s still struggling through the lingering effects of the drugs. 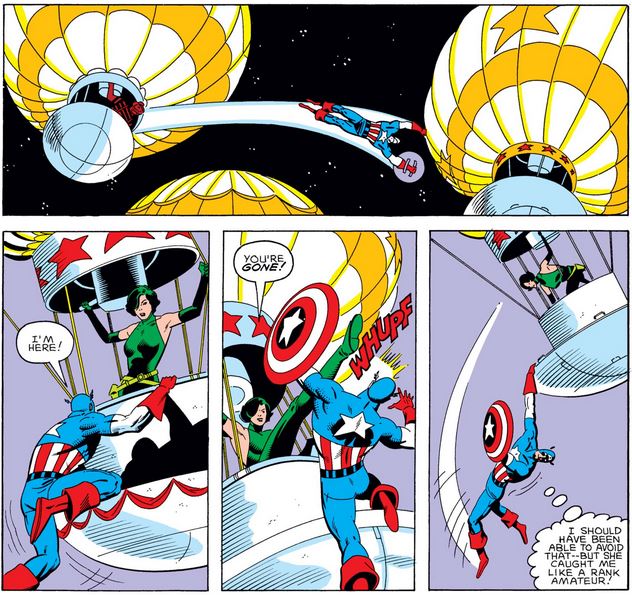 Let me change that: It’s up to Constrictor and Nomad to save the day. (Another point to the bad guy, who withheld drugs from both heroes.) Jack’s hesitant, of course, but after both Cap and Dum-Dum implore him to shoot, he shoots.

But he doesn’t shoot at the balloons carrying Cap and Dum-Dum, so Cap first tries to get to Dum-Dum’s balloon…

…and then tries to get Viper to save herself… 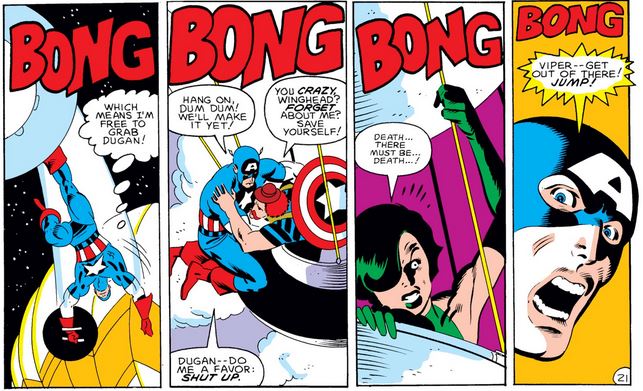 …but no doing. So after Cap and Dum-Dum jump to safety, Jack fires, presumably at the balloon the two heroes bailed out of, but triggering Viper’s balloon as well.

Afterwards, Cap recommends leniency for Constrictor and expresses relief that the country is once again safe… 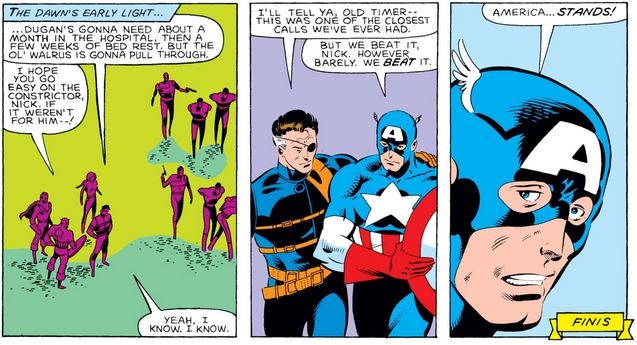 …but curiously does not express any concern for Viper, evil as she was. (It will come as no surprise to you, dear reader, that she is very much alive and will return to these pages in issue #341. Maybe he knew that too!)

In the letters page, we have an editorial note (from Mark Gruenwald and/or Mike Carlin):

For what it’s worth, I actually did assume Gail’s hair was blonde because she was undercover! (I didn’t notice the other two.)