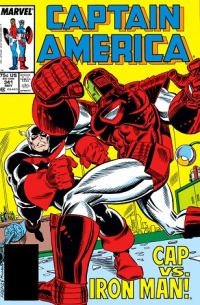 This issue follows up on the “disagreement” between Iron Man and the Captain in Iron Man #228 over Tony’s ongoing campaign to reclaim or disable all of his tech in other people’s hands, including the U.S. government, and by whatever means necessary. This is just one of many examples of Tony’s utilitarian approach to ethical decisions (especially those regarding his own interests), a perspective that contrasts starkly (sorry) with Cap’s own. Also, we see Lemar Hoskins adopt his new name and costume—and he tells us why (although we already covered that when he was introduced as the new Bucky in issue #334).

And lest I forget: The cover, by Ron Frenz and Al Milgrom, is a brilliant homage to Jack Kirby’s cover to Daredevil #43 from August 1968, covered here.

As you may recall, the title of last issue’s story was “Breakout,” a consequence of Tony’s invasion of the supervillain prison the Vault, so Cap returns the favor with Tony’s own house.

Tony obviously has his mind on other things, so he doesn’t notice Cap until he spins around in his chair…

The Presumptuous Avenger assumes he knows why Cap stopped by—remembering the events of Iron Man #228, not #229—but his teammate surprises him, starting with giving back Tony’s “gift.” (Notice how casually Cap flings it and how hard it hits Tony, reminiscent of Bruce Lee’s famous one-inch punch.)

Cap’s second reason is to let Tony know of the extended consequences of his actions, which Tony claims he would have accounted for somehow, had he foreseen them… some futurist he is! (This is one of the burdens of being a utilitarian: having to forecast all the consequences, good and bad, of your planned actions, in order to choose the best one.) And finally… the sheriff has come to town, and he’s a-bringin’ you in, varmint. 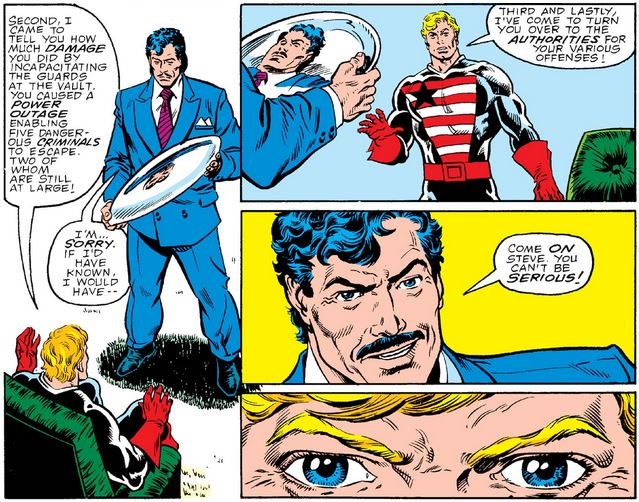 Tony uses the shield to distract Cap for just long enough to duck into his bedroom and emerge as Iron Man, while Cap confirms that he refuses to use a shield given to him for duplicitous purposes.

Cap displays his legendary defiance when faced with overwhelming odds: Of course he’s a far better and more experienced fighter than unarmored Tony Stark, but Iron Man is a different threat altogether (even in the silly “Silver Centurion” armor, ugh).

Below, we see an additional reason for Cap’s confidence: He thinks being in Tony’s home gives him an advantage. We’ll see how well that works out, but it’s also interesting how Cap uses the argument from obeying the law against Tony, when he himself has faced that question several times over the last few issues (including following Tony into the Vault in Iron Man #228). The two heroes’ circumstances weren’t identical, of course, but you’d think it would at least give Cap pause in bringing that up here, especially when Tony cites the greater cause of fighting for justice, an argument Cap has used himself to justify his few brief trips outside Lawtown.

Tony hails Cap’s resolve when he’s decided on the appropriate course of action (although he didn’t mean it in a good way) before giving him a utilitarian version of his argument for fighting the government to reclaim his tech, showing that he can see future consequences when he wants to. (“Siri, can you give me an example of motivated reasoning?”) 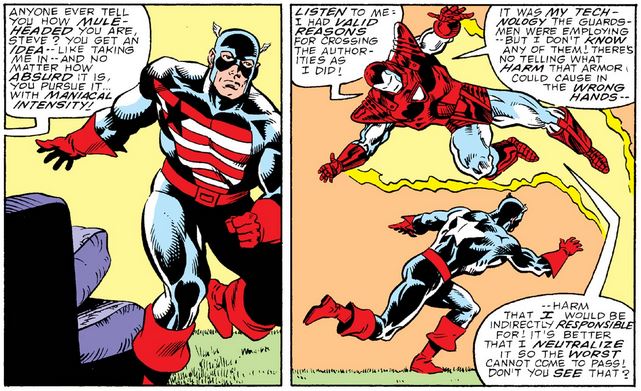 But Cap counters with the harm Tony caused by breaking into the Vault, showing how counterproductive utilitarian thinking can be when it’s not done right.

Tony finally uses his armor for more than just strength and protection, and acknowledges their ethical stalemate before Cap plays the “honor” card (which seems more relevant to Tony’s gambit with the shield than anything he’s doing with regard to the government).

And then Tony does what Cap gambled he wouldn’t: He uses his most powerful weapon, his armor’s unibeam, in his own living room. 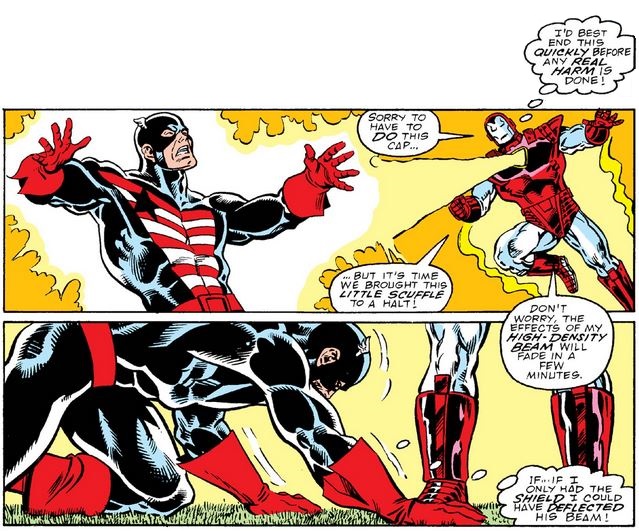 “High-density beam”? Density of what? (Does he mean concentrated and focused, like a laser… ’cause that was no laser, son.) And regardless, wouldn’t higher density make it more powerful? It actually looks like he made the beam more diffuse, which implies less density… sigh.

While Cap’s kissing the high-density carpet, Tony states the obvious, and then promises “a long talk about ethics,” which they do actually have on several occasions in the future, which will be treated lovingly in this space (as well as in my books on Captain America and the Civil War storyline).

After Tony leaves, Cap questions his own priorities and makes a judgment call, deciding that he has more important things to do than chase after Tony, whom he also wants to give a chance to redeem himself, showing that he maintains faith in even his most fallen friends. 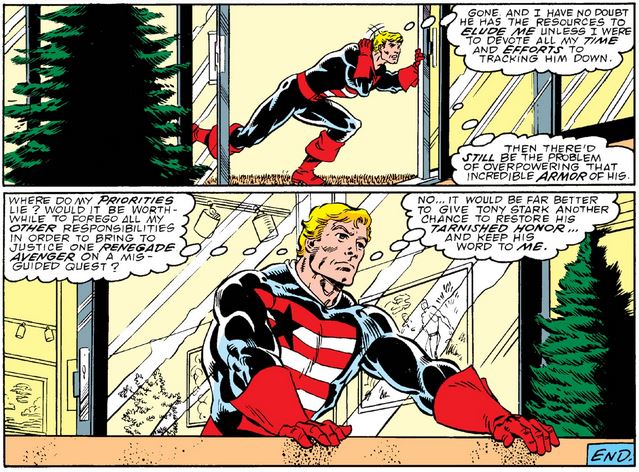 All that happens in just the first eight pages of this issue, comprising the first of three stories. The second deals with Lemar Hoskins and his own identity crisis, and he definitely does not bury the lede, revealing his new look to John Walker on the opening splash page.

No doubt you remember from our post on Captain America #334, when Hoskins was introduced as the new Bucky, that the inappropriate nature of his name and assignment was pointed out by comics writer Dwayne McDuffie as well as fans. One of the fan letters about Hoskins was printed in issue #340, laying out the issues extremely well, followed by a response from (I assume) editor Ralph Macchio.

In the story, a Guardsman from the Vault plays the role of Dwayne McDuffie or LaMont Ridgell, informing Hoskins about the issues with his name and convincing him to adopt a new one.

Soon thereafter, not only does Walker introduce his partner Battlestar (usually presented as one word, despite the way it’s shown here), but he also outs himself as a new Captain America, replacing the “retired” original. (We can imagine that Walker was emboldened by the leeway the Commission gave Hoskins regarding his identity.) 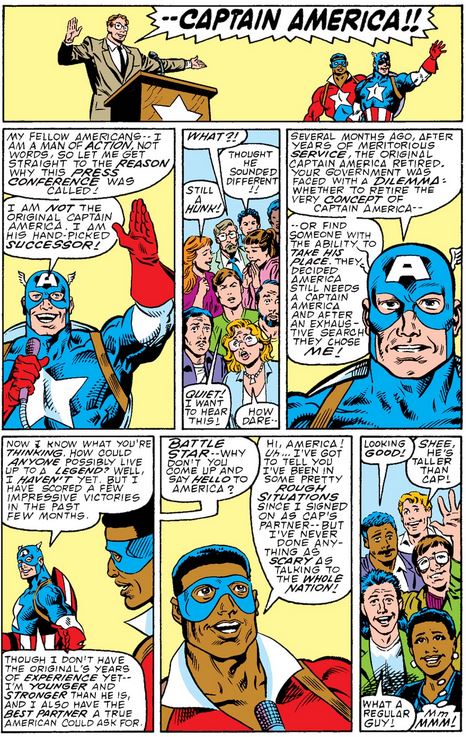 That’s not the end of the revelations, however: The other two “Buckies” who originally worked alongside Walker’s Super-Patriot appear, now calling themselves Right-Winger and Left-Winger (groan). They’re angry at Walker and Hoskins for “selling out,” and announce Walker’s real name (but are defeated before they can do the same for Hoskins).

The third story deals with the Serpent Society, the only important aspect of which for our purposes is to re-introduce Rachel Leighton, aka Diamondback, who calls Cap’s hotline for help with an infestation of false Serpents led by the Viper… which will continue in the next issue.