To say this issue is pivotal in the histories of both Captain America and Thor is an understatement… and we’ll find out why soon enough. For now, just know that this is the second half of the Captain’s side-trip on the way to confront Tony Stark for his actions in Iron Man #228, the first half having been Avengers #290, in which Cap helped his teammates defeat his old foe the Super-Adaptoid.

As Thor #390 opens, the Avengers are preparing to clean up the mess on Hydrobase, when who should appear but the God of Thunder himself, twirling his hammer in a pose reminiscent of the opening splash page of his first appearance in Journey into Mystery #83 (August 1962). 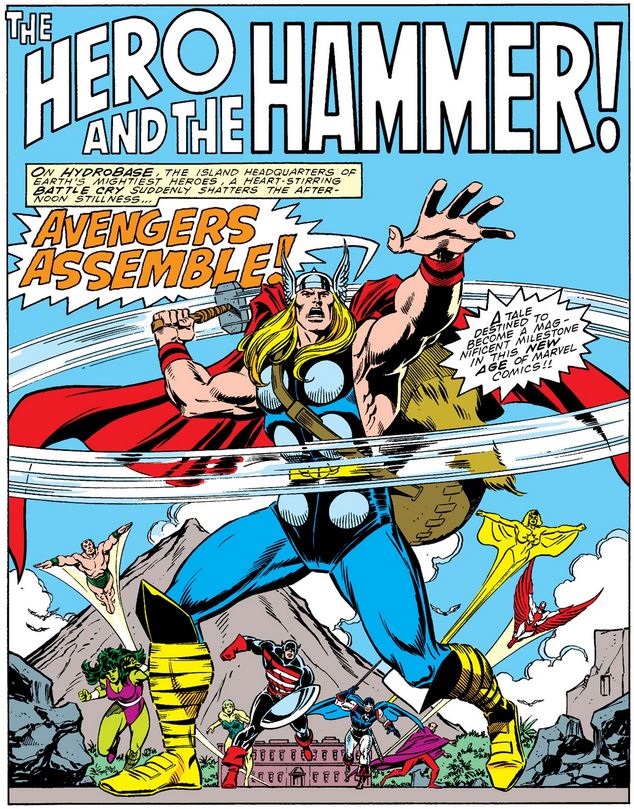 What’s the fuss, Gus? Turns out… nothing at all, other than returning from a battle with the Celestials, which had the pleasant result of healing the wounds he had the last time we saw him and restored his old costume. Like so many others, he does not recognizing the Man in Black; Cap does not seem to take this well, and challenges the Asgardian to hurl the mighty hammer Mjolnir at him. Thor does not hesitate to do this, confirming his old friend’s identity without even having to ask for his mother’s maiden name (which has never been revealed, I believe—impressive cybersecurity on Cap’s part!).

“Dramatically altered your appearance”… give me a break. (Sigh.)

Cap wastes no time in putting Thor to work, having been deputized for the time being by the Avengers’ leader Captain Marvel, who is suddenly doubting her ability to run the team despite having been through all this before—with Captain America, no less.

After the team finishes up, most of them take off, leaving the two longest-serving members to chat amongst themselves, and Cap starts by clarifying his new name. (Seeing that Thor usually calls him “Captain” anyway, it shouldn’t be that big a deal.) 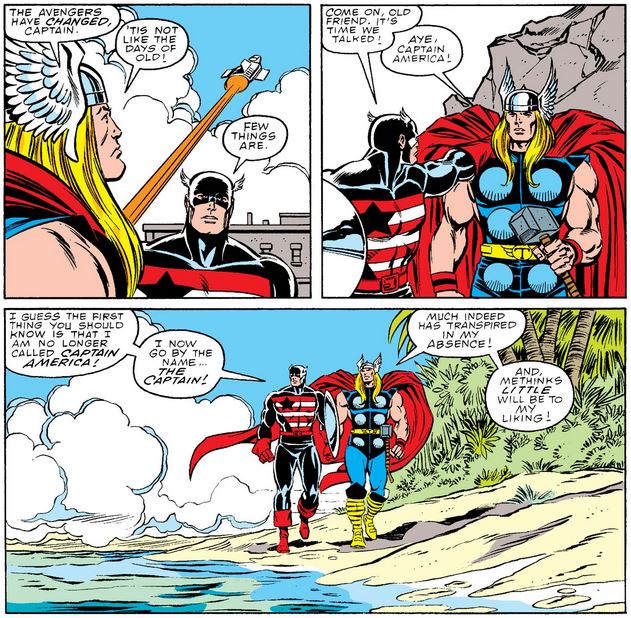 Cap tells his sad tale while the comic shifts focus, first to Asgard and then to Seth the Serpent God of Death, who swears vengeance on Thor… but Thor is more upset about events here on Earth, making the Falcon look reserved in his urging to fight back against the Commission in Washington, DC. But he told Sam several times, Cap tells Thor he does not want to fight his own government—rather, he has one particular person in mind.

He very concisely explains the events of Iron Man #228… 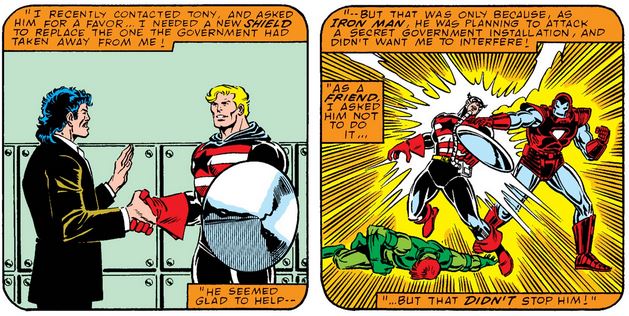 …and his posture makes his despair clear, as he give Thor (and us) a sneak preview of Captain America #341. For his part, Thor ponders this new struggle between two of his longtime allies and friends, one whom he admires above all others and one whom doth be his true bud, verily.

Of course, Thor has been around the block, so he considers that one or the other has been “affected,” with Tony having the more immediately obvious explanation (which happens to not apply this time). Little does he know that neither has changed; rather, both are acting consistent with their established moral characters (if just a bit more extreme, Tony with his “no holds barred” mission to reclaim his tech, and Cap with his absolute refusal to push back against the government).

Before Thor can break more rocks, though, an invasion force led by Grog the God Crusher—not to be confused with Gorr the God Butcher, from the recent Thor saga by Jason Aaron and Esad Ribić—appears on Hydrobase, sent by Seth the Serpent God of Death to defeat Thor the God of Thunder. (Enough with these titles, geez.) The Black Knight, who is still on the island too, hears the call of battle, but wonders where the other two fellas are…

…providing an excuse (as if one were needed) for a fine panel courtesy of Ron Frenz, Brett Breeding, and Christie Scheele, with inspiring exposition by Tom DeFalco that emphasizes the martial virtues of both heroes.

Finally, the moment we’ve been waiting for: As Thor is subdued by Gogg, Cap sees Mjolnir lying nearby. He watched earlier as Gogg tried in vain to lift it, so he wonders how he can possibly do it—perhaps being unaware of its inscription, reflecting Odin’s enchantment demanding that one be worthy in order to lift the mighty Uru hammer.

Apparently Gogg’s forces are rugby fans, forming a ruck on top of the Captain and making it very difficult for him to lift anything, much less Mjolnir!

But lift it he does, proclaiming the indomitable will of a determined individual as the same time that he privately marvels at the fact that he was able to lift the hammer at all.

Cap relishes in the power of Mjolnir for a moment before tossing it back to its rightful owner, who breaks free from his own rugby ruck just in time to catch and show the true power of Thor: the Thorspeak!

Who says Cap is the only one who can give profound speeches?

Thor pounds Gogg into the ground and—oopsie—all the way through Hydrobase, setting up a conflict of duties that shows a key difference between Thor and Cap: The former would pursue the wrongdoers and take the battle to Seth, while the latter would rather save lives at the cost of letting Gogg and his forces escape. Neither is right or wrong, but this shows how two virtuous people can make different choices in a case of moral conflict, reflecting their unique moral characters. 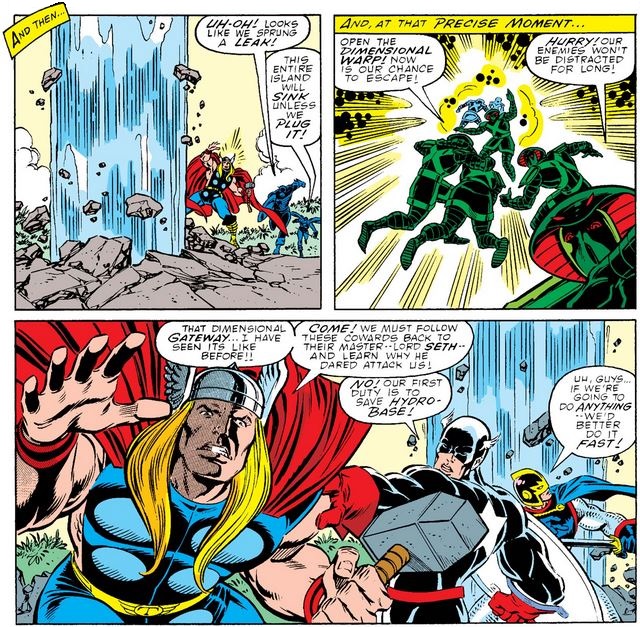 Luckily, solving the Hydrobase problem is easier than anybody thought, surprising the Black Knight but apparently not Cap. 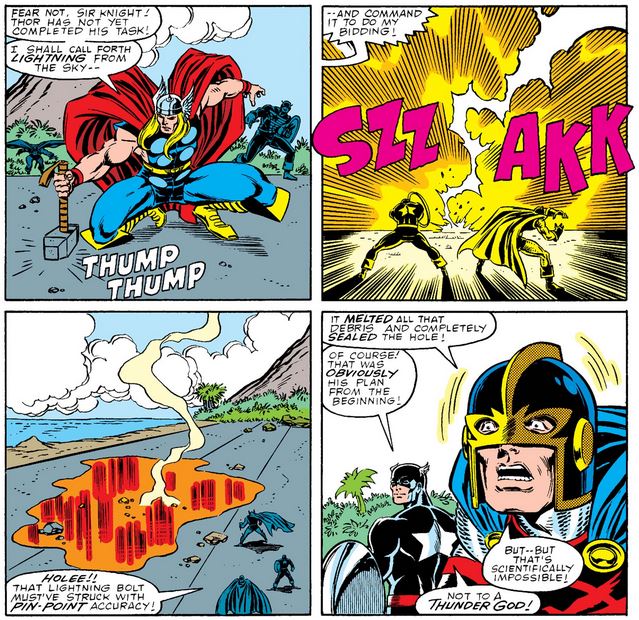 When all is said and done, Thor admits his earlier doubts to Cap, which were “quickly erased” after he lifted Mjolnir, proving his worth in the highest manner, based on being “pure of heart and noble of mind.” 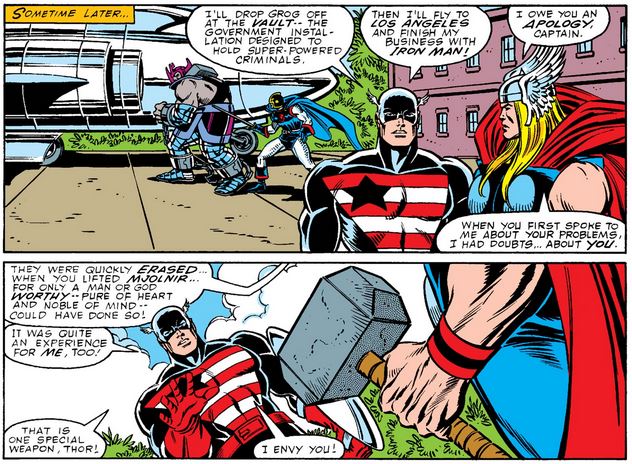 Of course, few others have wielded Mjolnir, before or since, which Thor acknowledges by declaring that he and Cap are “hammer bros.”

In fact, a feature page in Thor #400 (February 1989), drawn by Frenz and Breeding, shows all who have wielded Mjolnir to that point, and it is a select group indeed.

(Dargo, heh. Why wasn’t he invited to the ThorFest at the end of the War of the Realms, I wonder? I mean, he was a charter member of the Thor Corps!)

(We won’t speak of the issue of the recent Secret Empire event in which the Hydra-ted Captain America lifted it… it’s complicated.)

Finally, someone might just have a book coming out in 2022, ahead of the movie Thor: Love and Thunder, about what makes one worthy of wielding Mjolnir, and there’s a pretty good chance it mentions this issue. (More on that soon, I hope, here and elsewhere.) In the meantime, check out this episode of the Across the Bifrost podcast, guest-starring Rick Verbanas from the Captain America Comic Books Fans podcast, discussing Thor #390 and the other times Cap wielded Mjolnir.

Collected in: Thor Epic Collection: War of the Pantheons