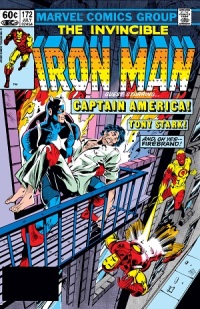 This issue comes soon after two pivotal events in the life of Tony Stark: falling off the wagon in issue #167, then giving up the Iron Man armor and identity to his pilot Jim Rhodes at the end of issue #169. Both lead into a protracted story, lasting through issue #200 and inspiring much of the first Iron Man film, during which Obadiah Stane takes over Stark International while Tony struggles against his disease and Rhodey acclimates to being a superhero. As we’ve seen in recent issues of Avengers, Captain America has been worried about his friend for a while, and paid him a visit (alongside the Wasp) in Avengers #232, but this issue’s encounter is more eventful.

We come into the issue after Rhodey is called into the office by Tony’s staff, who need him to find Tony in a last-ditch attempt to save his company… and he knows just who to call.

As is usual in Cap’s guest appearances, the narrator spends a little time extolling on his characteristics, including his supreme physical qualities as well as his moral ones—in this case, highlighting his “air of righteousness that stops short of self-righteousness,” a delicate balancing act worthy of the term virtue.

His self-recrimination above is consistent with his portrayal in recent issues of Avengers, including #233-234, which led directly into this issue.

Luckily for Cap, a fellow veteran points him in the right direction…

…while an onlooker has a distinctly different attitude toward the Sentinel of Liberty, regarding him just as much a part of the corrupt establishment as Tony Stark.

If you don’t recognize it, that is the mask of Firebrand—not to be confused with other Firebrands, such as the Golden Age Quality Comics hero and his sister, a key member of DC Comics’ All-Star Squadron—although he shares the fiery powers of the latter (not to mention a dozen other heroes and villains).

It doesn’t take long for Cap to find Tony…

…nor to lay into him, asking the obvious question (although rarely an effective one). 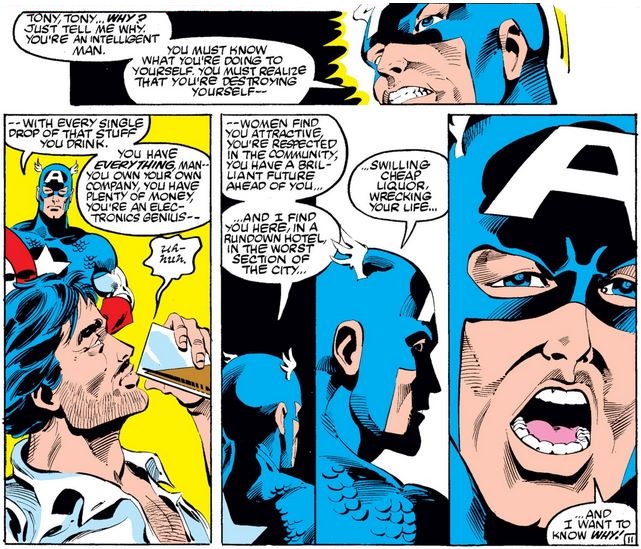 Cap gets mildly physical, but Tony knows him too well to fall for his bluff.

Tony explains that he has no choice but to drink, given how he feels, and Cap has heard enough, citing his own father’s alcoholism (mentioned for the first time, both here and in this month’s Captain America #283).

Cap ends their all-too-brief encounter with the common wisdom that you can’t force an addict to seek help—they have to want it (although you can certainly help them see why they should want it). On his way out of the building, he lets out some of his anger on the wall before going all Daredevil on us. 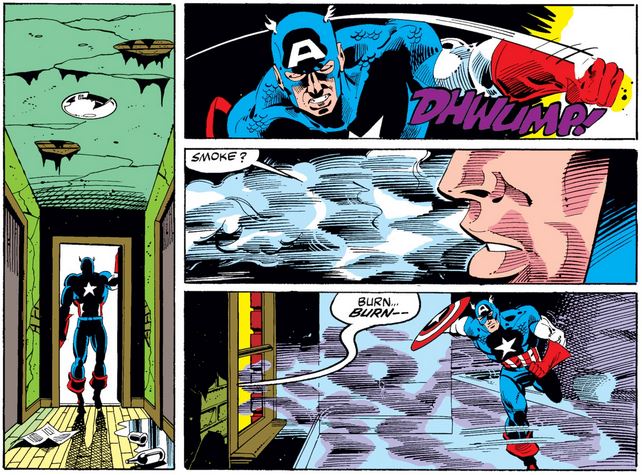 After he discovers Firebrand hovering outside, torching the hotel, Cap leaps at him, only to be called an anachronism (real original, fella) and then running back inside the hotel for Tony and other residents.

Tony picks up where he and Cap left their discussion, claiming that he doesn’t want to be helped. As Cap carries him out, they run in a familiar shiny face, whom Cap quickly enlists in the effort to fight the fire. 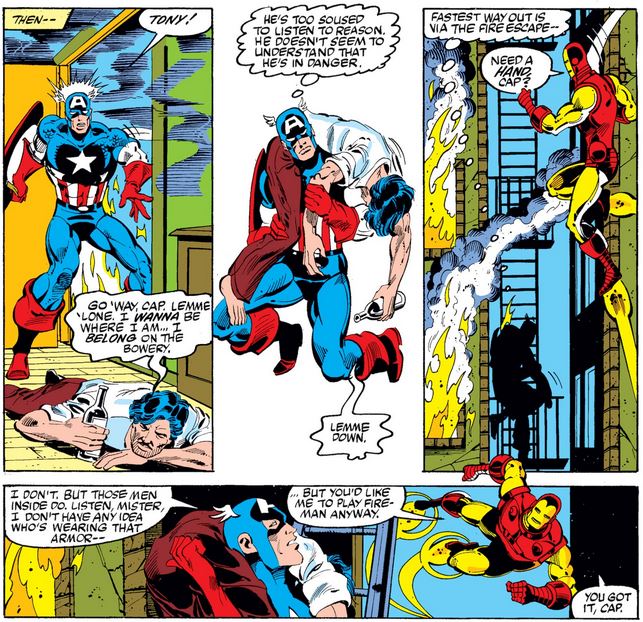 While Rhodey prepares to dump a nearby building’s water tank on the blazing hotel, Firebrand returns to stop him, but a quick dunk in the East River douses his flame (although his grievances still burn bright). 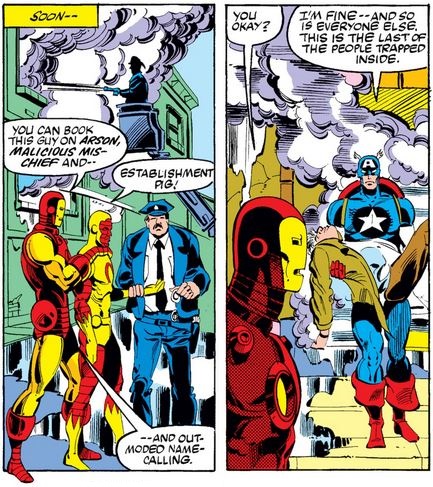 …but even in his compromised state, Tony’s one step ahead. 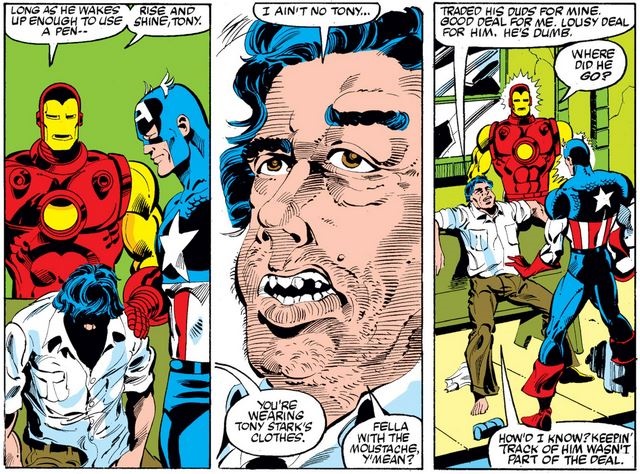 Of course, Cap blames himself for Tony getting away, and it falls to Rhodey to make him feel better. (Good luck with that, Jim.)

By the way, Tony’s struggles with alcohol are discussed in Ron Novy’s chapter “Fate at the Bottom of a Bottle: Alcohol and Tony Stark” in my edited volume Iron Man and Philosophy: Facing the Stark Reality (Wiley, 2010).

If you or someone you love is struggling with substance abuse, please contact SAMHSA’s National Helpline at 1-800-662-HELP (4357) or at this link.

(And if you’re caring for an addict, please know that Al-Anon is available for you as well.)

Collected in Iron Man Epic Collection: The Enemy Within.