This issue sees Captain America take on the Scarecrow, whom he last fought in Captain America Annual #6, and also confront the mysterious Coalition for an Upstanding America, who have been placing posters with his image on them around the city for the last few issues.

After we see Scarecrow kill a man in his apartment, our hero appears for the first time, with the exposition suggesting a rationale for Cap’s NYC residency, while the man himself swings by one of the posters in question while reflecting on the events of the last few issues…

…especially what his childhood friend Arnie Roth said to him at the end of the last issue.

Cap nicely connects this recent personal revelation to a recurring theme in this book (especially in the current run by writer J.M. DeMatteis) regarding the country itself, before making a very Spidey-esque entrance.

Turns out our wannabe Jimmy Olsen is not Captain America’s best friend after all… especially after he explains the Coalition’s goal. 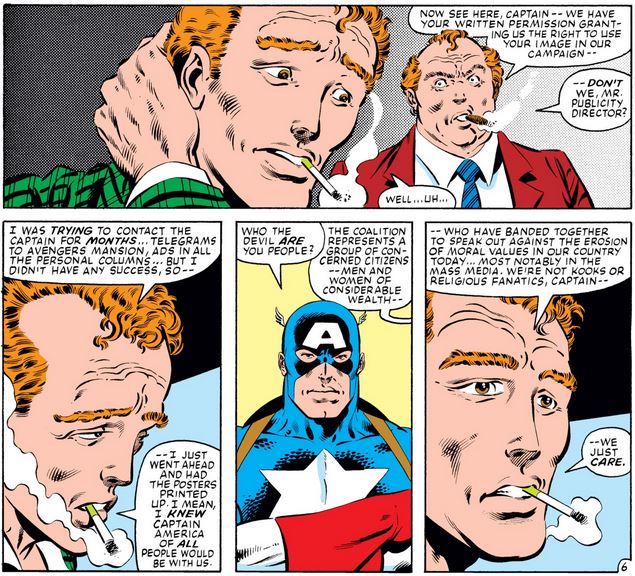 After Cap hears the young man out, he makes clear where he stands.

Note he is not denying the Coalition their right to speak out on the issues they believe in—or even explicitly disagreeing with them—but he does not want his name to be associated with them, so he can be free to stand for all Americans.

Soon, however, his attention to drawn to more pressing matters involving the Scarecrow, who is targeting people associated with the Coalition. 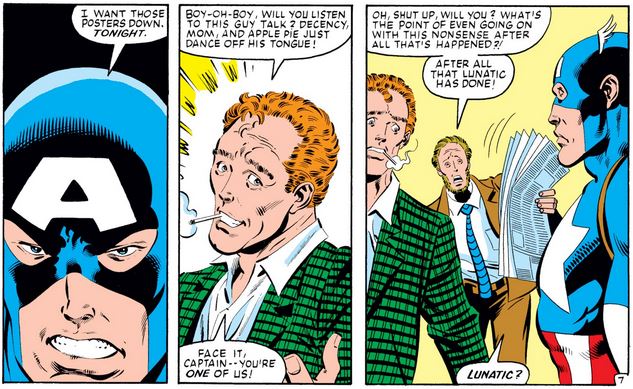 As Cap prepares to leave and investigate this new development, he leaves a stern command for the Coalition… and we get an important lesson about the dangers of nepotism!

Cap ponders the Scarecrow’s recent change in behavior and possible motivations, while also berating himself for not apprehending him last time they fought (although he was abducted himself, as we know).

Cap changes into his commercial artist’s attire to visit Arthur Bennett, the advertising executive working on the Coalition’s account whom Steve has worked for in the past (and who revealed himself to be an anti-Semite in issue #275), although he doesn’t end up getting much useful information.

Later that week, Cap is staking out the situation while mulling over why the Coalition bothers him so much.

This is an interesting and more subtle variation on the more common issue of the influence of money on politics: Cap is more concerned here with wealthy interests affecting people’s values (and assuming that people may be too susceptible to such influence), which is an even more pressing issue in today’s mass media and social media landscape than it was in 1983.

Luckily for him, Cap stops by Bennett’s office to drop off some work and finds the Scarecrow in the middle of a murder attempt. (This scene reminds us that this Scarecrow more closely resembles DC Comics’ Rag Doll than the Batman villain who shares his name.)

(That last comment will become important later in the issue.) 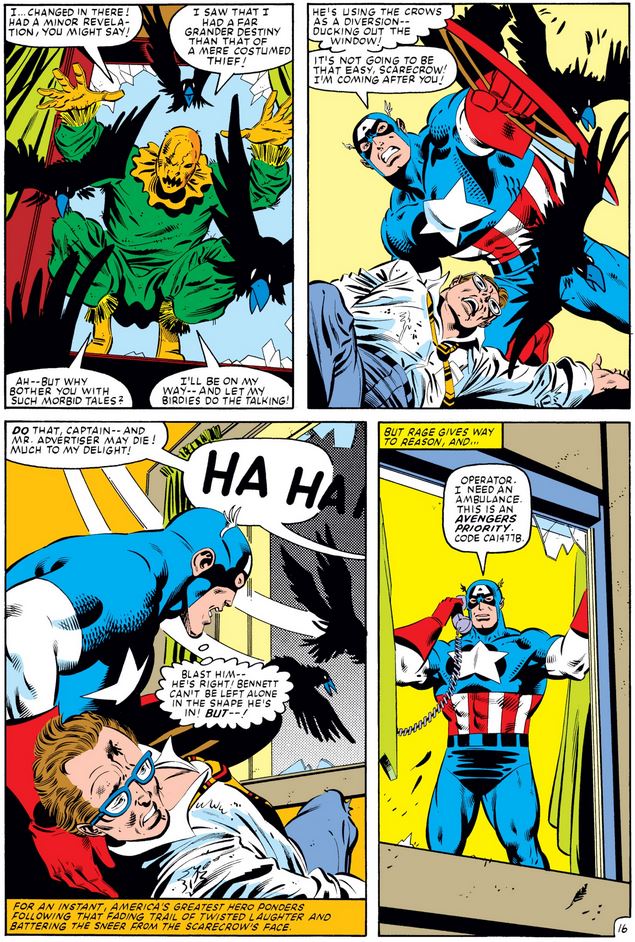 …and Cap gives away the secret to getting a quick ambulance. (Make sure you bookmark this page for easy reference!)

Finally, at the press conference to start off the Coalition’s cable network, mild-mannered freelance artist Steve Rogers sounds more than a little like Captain America as he expresses doubts about the wisdom of the endeavor.

(Bennett doesn’t get it, apparently.)

But the launch goes off the rails almost as soon as it begins.

…and also offers proof of McArthur’s hypocrisy, revealing that he plans to sell false morality to people he actually mocks.

McArthur admits the truth before Cap subdues the Scarecrow, after which his brother reveals the real story behind the Scarecrow’s actions, in what amounts to a commentary on the practice of solitary confinement. (For more on this, see this piece by Elena Weissmann.) 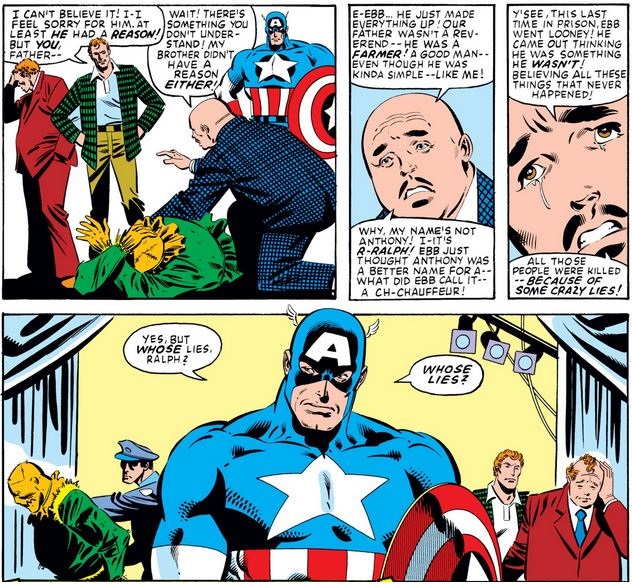 Take your pick—there are certainly enough lies (and liars) in this issue to go around.