These issues are just four of the fourteen chapters of “Atlantis Attacks,” the crossover event among the Marvel Comics annuals in 1989. I won’t even attempt to put these panels in the context of the story, especially since these issues comprise less than a third of it. Most of what I share here shows Captain America in a leadership role and comments on his relationships with other heroes. Of more interest is some of the bonus material, particularly in the Avengers Annual, which we will cover after the main story content.

In the main story in the Avengers Annual, we see an odd assemblage of team members, including Sersi (who becomes a full member in next year’s Avengers #314) and the original Human Torch (who was revived and joined the team in West Coast Avengers #50).

Cap’s “wise” counsel to young Quasar foreshadows another story in this issue, discussed later in the post, regarding the latter’s induction into the team.

You want more heroes? We’ve got more heroes! (I absolutely loved these huge spreads when I was a kid.)

Eventually, as often happens in annuals, the larger team splits into smaller groups, with Cap’s heading down Florida way. After observing his old friend Vision, Cap reflects on how much he’s changed since being reconstructed without his original personality. 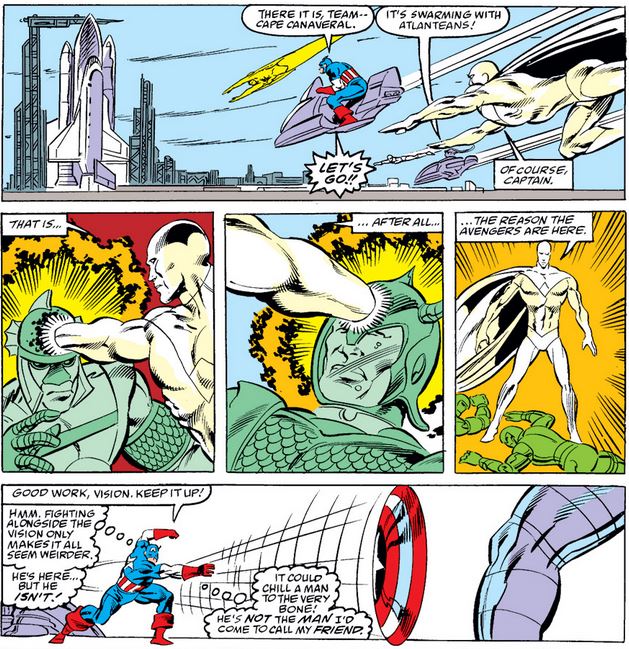 Cap performs his traditional role of cheerleader for the team…

…and by the end of this installment, he feels there is cause for celebration. (No one told him there are ten more issues in the story, apparently.)

In the West Coast Avengers Annual, Cap reconnects briefly with the Torch—more than he had a chance to do in the Avengers Annual, I presume—and has to remind himself that the Vision was never built out of the Torch’s body, as he (and we) had been led to believe since Avengers #133-135 (as explained here).

Just like the old days, Cap castigates the Beast for joking in times of crisis.

Falling naturally into a leadership role with the enlarged team, Cap gives them a rallying cry…

…as well as strategic orders on the battlefield.

In this issue, the team is in search of seven female heroes who were abducted one of whom is Storm, who was believed to be dead at the time (as of Uncanny X-Men #248)…

…which explains Cap and the Wasp’s confusion (but not their failure to recognize her, duh). However, it does give the two longtime Avengers a chance to show their teamwork (all too rarely seen). 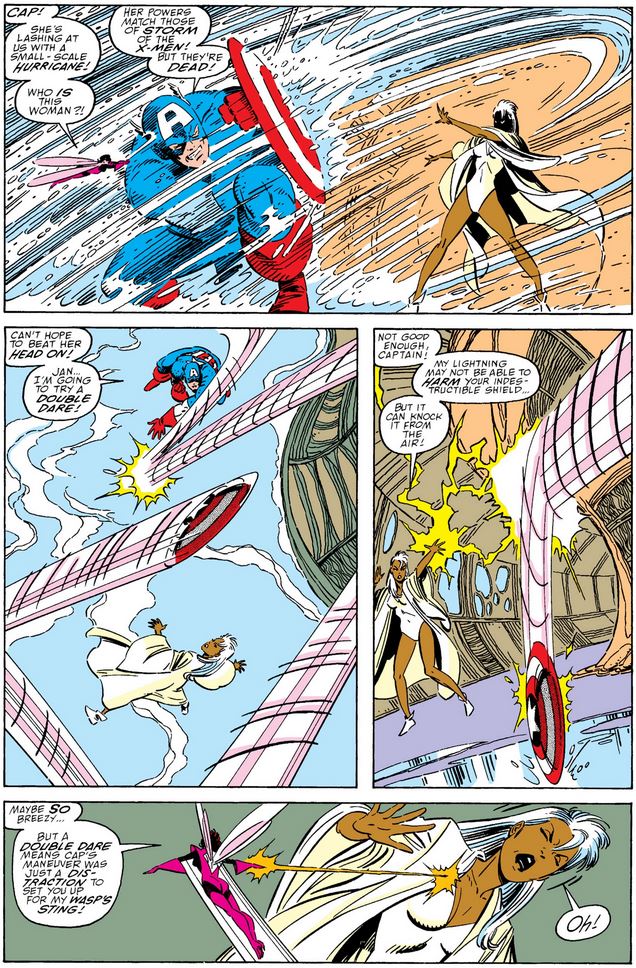 Cap issues another call to action, this time acknowledging the worsening stakes…

…as shown in the episode’s final scene.

Cap is unusually despondent here, which I always find dispiriting: I never like to see him relinquish his fighting spirit, no matter how bad things look.

Stepping outside the story for a second, I think this is all too often a cheap ploy by creators to emphasize the gravity of the situation: “Look, even Cap’s worried!” Another example is the bottom of the final page of Age of Ultron #1 (May 2013), by Brian Michael Bendis, Brian Hitch, and Paul Neary, which uses Captain Sads as an emoji to represent the dystopian nature of the story: 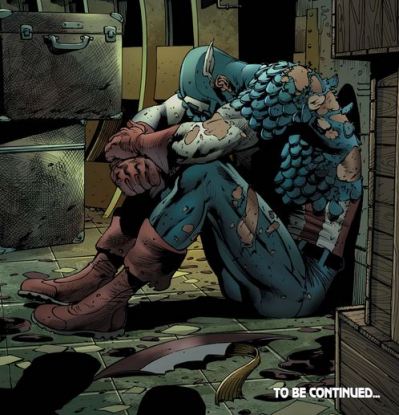 Back to 1989… the Thor Annual picks up exactly where the West Coast Avengers Annual left off, with the Thing, Thor, Quasar, and Doctor Strange arriving to help… and in his sole relevant appearance in the issue, Cap is more than willing to let them try.

Finally, in the Fantastic Four Annual that wraps up the whole story, the heroes head underwater, and Tony makes the mistake of referencing Vision’s past relationship with the Scarlet Witch. 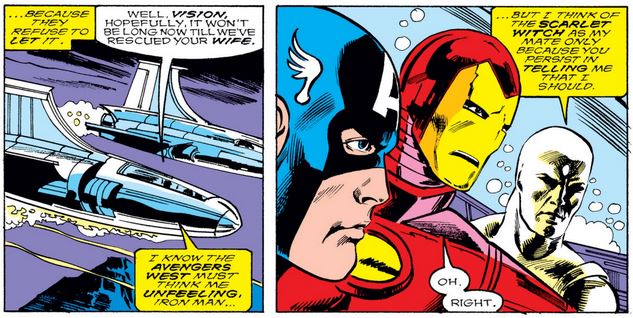 He tries to make up for it, but Cap lets him know, is no uncertain terms, that it’s not necessary. (It seems Cap is really affected by “Tabula Rasa Vision,” not only because of their long time together as teammates, but perhaps also because of the links with the original Human Torch that for years he thought existed.)

After the battle is won and evil defeated (until next time), Namor—also thought deceased until now—flies away with his cousin Namorita, and Cap reminisces with the Torch about their days as the Invaders during World War II and their young sidekicks, and makes a very odd statement using a very specific term that calls back to his episodes as Nomad and the Captain (but why?). 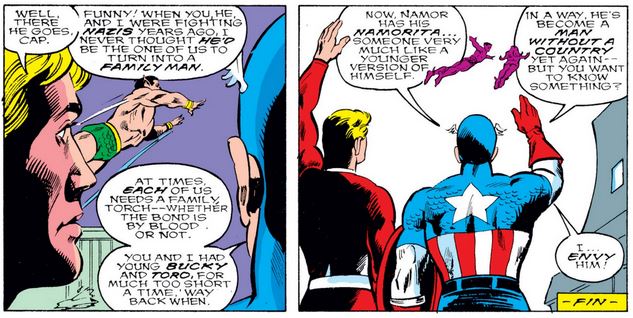 Also in the Avengers Annual is a short story, set a few months earlier, featuring Captain America interviewing and training Quasar for a spot of the team, starting with Cap pulling the young hero aside for a talkin’-to. (Note the mention of Damage Control, whose second miniseries will be covered here soon.)

Cap makes the formal invitation, but there’s another suitor… who calls Quasar “Blondie” even though all three of them are blonde. (Oh Clint.)

Not the toughest battle Cap has ever fought… which may explain his smile throughout!

Before the papers are signed, though, Cap has some questions he’d like answers to, and Quasar is torn between keeping his secrets…

…and opening up to his longtime hero.

After recounting his story to this point, he admits to a conflict of duties, a concept Cap is all too familiar with himself—and one that he has also convinced Quasar is a non-issue. 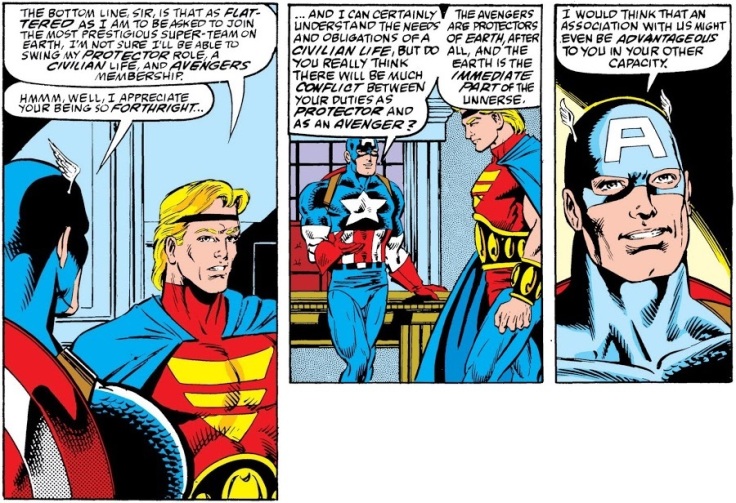 After some testing and training—plus an unexpected attack from Firelord, seen in the opening page of the story, like Chekhov’s flamethrower—they make it formal, and Quasar is an Avenger (as we saw in Avengers #305).

Also in the Avengers Annual is an interesting feature, written by Fabian Nicieza and illustrated by a number of different artists (including Paul Ryan in the panels below), that shows our favorite college department chair procrastinating about conducting annual reviews of his faculty…

…and like any department chair—trust me on this—he would rather be doing anything else. 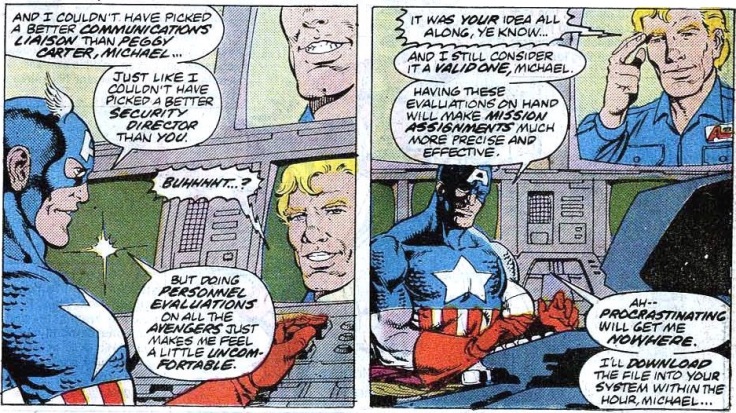 This gives us fascinating insight into Cap’s opinions of his fellow Avengers, which are actually quite candid, especially regarding their fighting skills (or lack thereof).

First up is the Asgardian of the group, whose fighting skills and power are unmatched… but he’s not a tech guy. (And Cap is?) Nothing about his impetuous nature, though.

He covers Tony next, who more than makes up for the Luddite above in the tech department, and is a decent fighter as well (who’s nonetheless lucky he has armor)… and Cap is not shy about pointing out his character flaws, no-sir-ee. 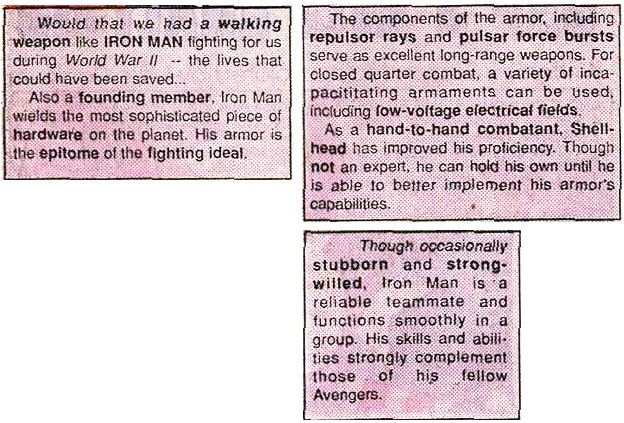 Next up are the former spouses, Hank Pym and Janet Van Dyne: Cap doesn’t go into Hank’s mental problems, choosing to focus on his continued usefulness despite abandoning an explicit superheroic identity, and he positively gushes about Janet’s growth since founding the Avengers and becoming more resourceful as a fighter, leader, and hero.

He seems to see the chaos within Wanda, which will only grow in coming years…

…while remaining concerned about the Vision, now impaired by a lack of emotion that leaves his rationality naked and his artificial humanity incomplete, possibly compromising his potential as a hero.

Oh boy… it’s Clint’s turn, although Cap spares him most of the criticisms he might have registered in their early years together, having come to see him as a worthy colleague and leader (as well as an excellent combatant both with weapons and hand-to-hand).

Overall, Cap praises T’Challa, but not in the glowing terms we’ve become used to (and which will continue for years to come). And once again, he seems ignorant of the powers granted to Black Panthers by the “heart-shaped herb.”

He covers some others Avengers, including She-Hulk, Wonder Man, Tigra, the Black Knight, and Quasar, but I’ll wrap this up with his write-up of his former partner, Sam Wilson, which is short and sweet (but reasonable, highlighting the skills Sam would probably agree are his best). 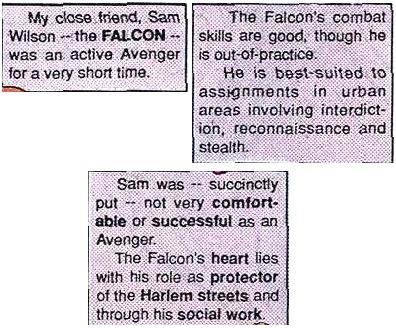 I’m happy to see I’m not the only one who uses exercise as a procrastination too!

“Why am I so reliable?” This reminds me of this great exchange between a later Hawkeye, Kate Bishop, and Jessica Jones in July 2017’s Hawkeye (vol. 5) #6, by Kelly Thompson and Michael Walsh: 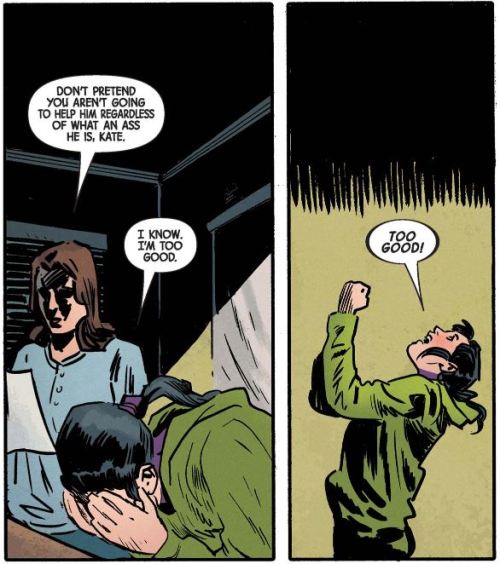 Finally, there is a more lighthearted analogue to Cap’s overview in the West Coast Avengers Annual, “Rate the Hunks” by Mark Gruenwald, Amanda Conner (!), and Christopher Ivy, in which Janet and She-Hulk size up their male teammates…

After they discuss Thor, whom they both agree is a perfect 10, and Iron Man, who rates a 7 and a 9, they get to Cap, whom She-Hulk regards as too stiff and gives him an 8, while Janet rates him a 10, even with Thor. 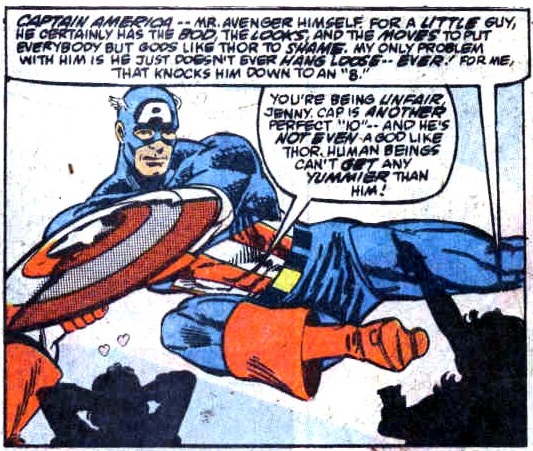 (The hearts over Janet’s head are very cute—I appreciate how she is portrayed as both worthy of Cap’s respect and still goofy when appropriate.)

Oh, and they actually rate former Avenger Reed Richards, who gets a 9 from Janet—who likes “brainy older men” (cough, Hank, cough)—while She-Hulk can’t even think about it, and gives him a 4 (“his favorite number”).

All collected in Atlantis Attacks: The Original Epic.