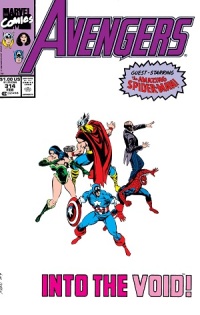 What’s this—an entire post devoted to a single issue of Avengers? No minor appearances in other books connected to a crossover event? Is that even allowed? It is true, my friends (and what a relief): Avengers #314 launches a five-part story that sees Sersi of the Eternals join the Avengers, who are also joined for this tale by Spider-Man, with nary a tie-in in sight.

The issue opens over the ruins at Avengers Park following the events of the last issue, as observed by Iron Man—whoever he may currently be—and with Cap overseeing an ambitious reconstruction of Avengers Mansion.

What did I mean by “who Iron Man might be”?

UPDATE: In a comment, Michael Hoskin explains what I missed:

In Iron Man #230, Tony arranged the “death” of Iron Man at the hands of Firepower. In #231, Tony resumed being Iron Man but claimed to the public that he had simply hired a new Iron Man. Tony kept up this pretense with the Avengers for several years, even among those who had previously been in his confidence (including Cap). It probably didn’t hurt that many of the Avengers knew Rhodes had been one of them for a while, so Tony genuinely had sent a “replacement” to the Avengers before.

Cap’s not wondering who the Iron Man is because of Tony being shot – he’s wondering because Tony claims he’s not the one wearing the armor and they are no longer on sufficiently friendly terms.

Cap confirms that, even in the Marvel Universe, New Jersey is New York’s dumping ground… and Thor is now the God of Trash.

As we see above, Cap continues to be skeptical about the man in the iron mask, but he’s off to see a movie star…

…namely Sersi, who is quite in the Christmas spirit, making sure to bring out the mistletoe when Cap is around (as we know from Captain America #355 and #357). Unfortunately for her, he has another kind of liaison in mind. 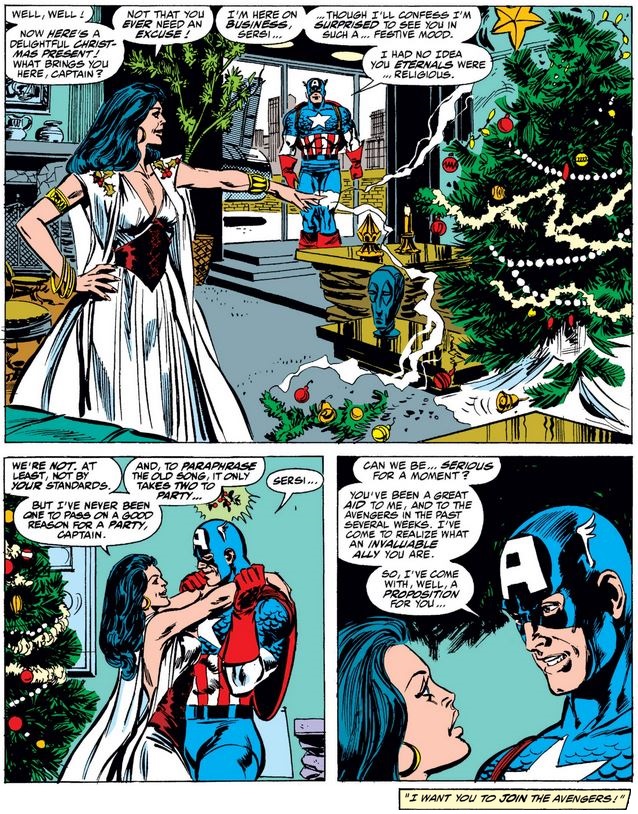 Before she can answer, though, reality seems to turn itself inside out (as Thor notes while taking out the trash, returning with a webcrawler in what amounts to a fine trade), and as Cap leaves to return to Avengers Park, Sersi signs on for the time being (literally changing into her costume as she leaves her apartment). 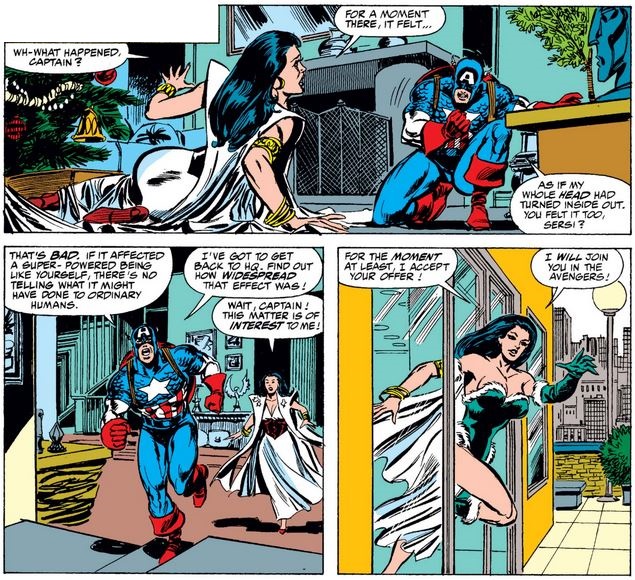 Before they take to the sky, we get yet another bit of foreshadowing as John Jameson mentions his experience as Man-Wolf. (Although, seeing as this is not Cap’s own book, it may be just a coincidence.) 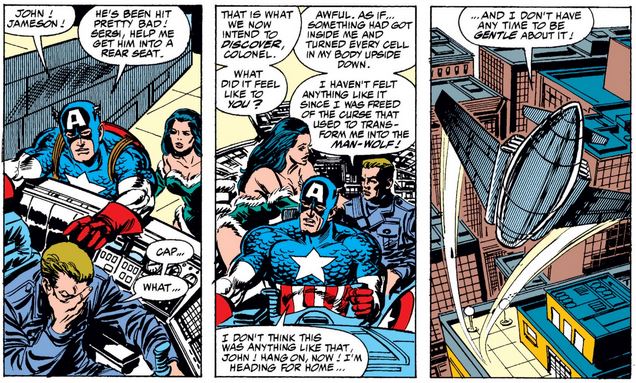 Once back with the other Avengers in the communications center beneath Avengers Park, Cap touches base with Hank Pym on the west coast, who reports that they felt the disruption there too, and Sersi confirms it was worldwide, leaving Vision to make the logical deduction. 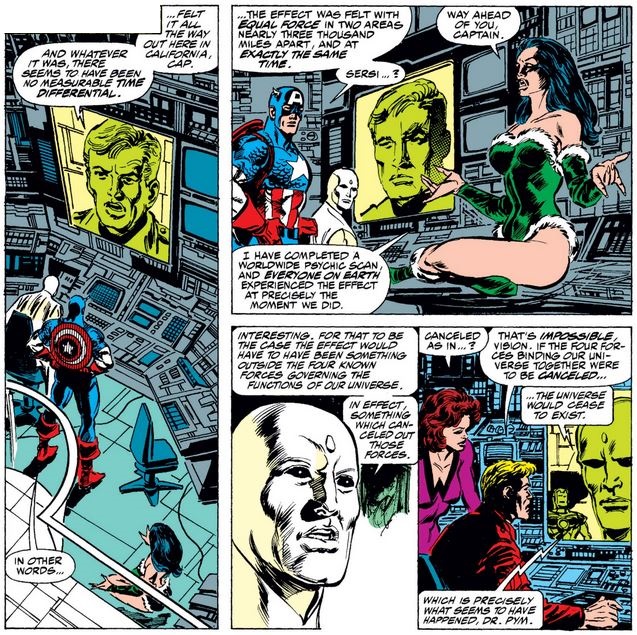 It’s not a good sign when an Eternal is shocked, and Cap only makes it worse by suggesting a possible source of an extra-universal invasion.

Hank doesn’t want to consider it, and suggests waiting until it happens again—at which point the reader learns that the disruption was connected to Nebula (adopted daughter of Thanos), who co-opted a research project on Earth which stumbled on the power source that caused it.

Starfox (brother of Thanos) discovers this and manages to contact Jarvis before he is captured by Nebula’s ally, and after Cap calms Sersi down—inappropriately, as Jarvis points out—he impresses us with his scientific analysis. 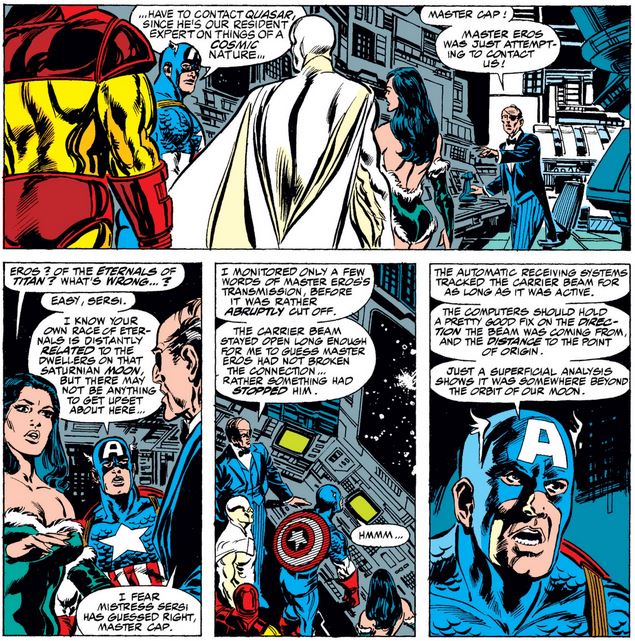 Tony doesn’t contribute much, but just enough to arouse Cap’s suspicions once again.

After Tony finds the precise source of the signal, he and Vision start to leave to investigate, passing a returned Thor and his amazing friend Spider-Man in the hall, just before a trio of reality disruptions rocks the Avengers. Cap asks the newest member to use her powers to block the effect from their immediate area…

…which shes does, with significant effort, collapsing afterwards. 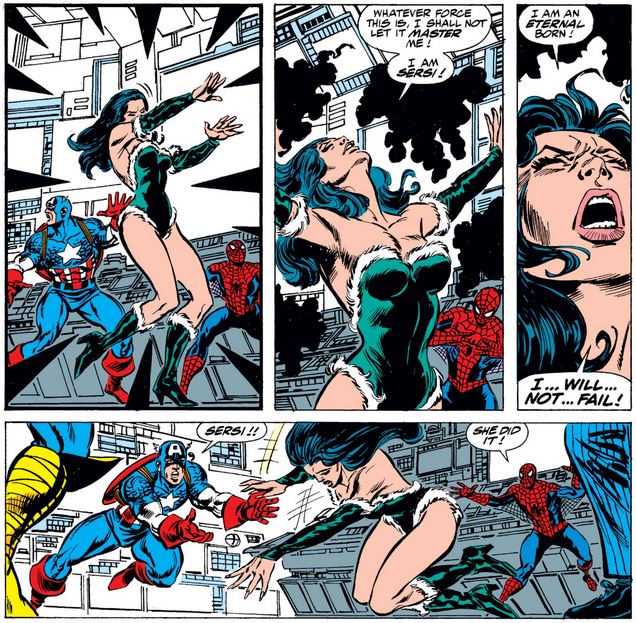 She’s not too tired to flirt, though, leaving Spider-Man to call the others’ attention to the screen…

…and he asks the obvious question (suggested by the cover). 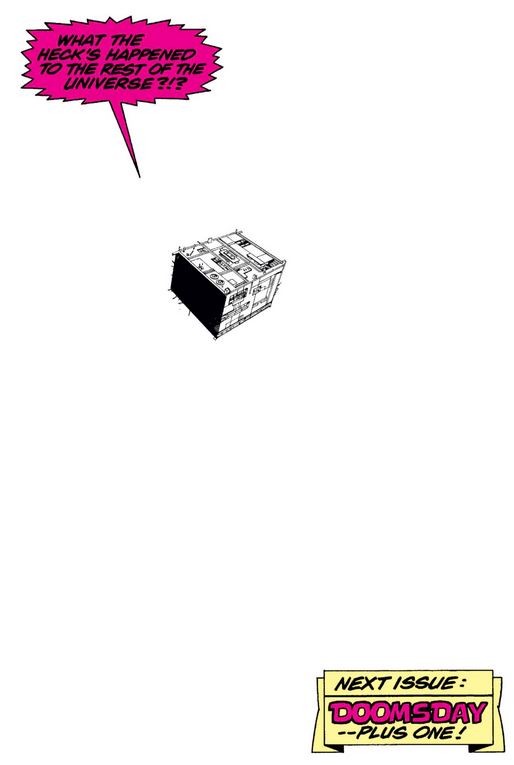 More answers to come in the next issue!

Collected in Spider-Man: Am I an Avenger? (and eventually in volume 19 of the Avengers Epic Collection).