This issue of Avengers continues the five-part story guest-starring Spider-Man that began with issue #314, picking up their fight with Nebula after the heroes rescued reality itself in the last issue. As a bonus, we get a scene from Silver Surfer as Norrin seeks out Captain America for information of Thanos, but has to deal with She-Hulk first.

The first third of Avengers #316 deals with Iron Man and Vision, who are tracking Starfox’s signal to Nebula’s ship after his distress call was cut off in issue #314. In the lab on Earth where the resolved universal disturbance was created, the Avengers had Nebula in their grasp for a moment, but failed to keep an eye on her during their “moment of jubilation,” allowing her ally Gunthar to teleport her away. But Cap stays cool, seeing the whole picture, and considers the case closed…

…triggering a return to jubilation for the God of Thunder.

Cap thanks Spider-Man for his service, but he’s not ready to leave yet (and I imagine his contract has him signed for five issues anyway). 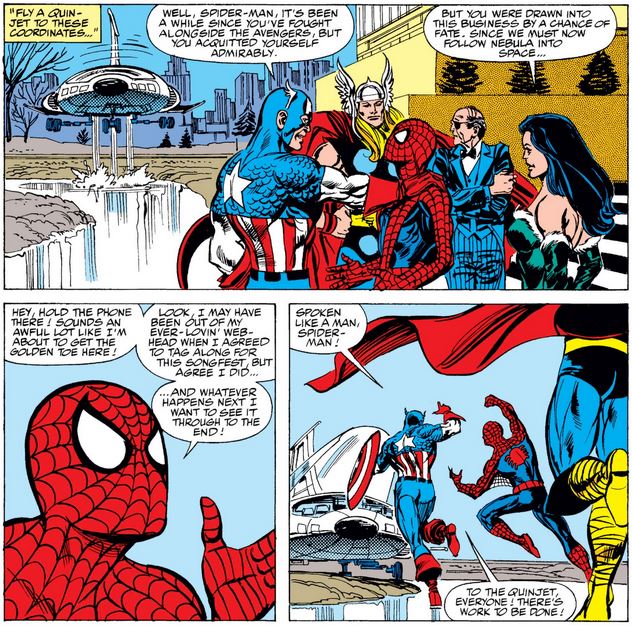 The “spoken like a man” comment reminds me of a terrific panel from War of the Realms #1 (June 2019), by Jason Aaron, Russell Dauterman, and Matt Wilson,  in which Spidey corrects the Asgardian warrior Hildegarde:

Back in 1990, Iron Man and Vision manage to break into Nebula’s ship, after which they engage with Nebula’s security forces, with both Avengers gratifyingly affirming the value of alien life (which is all too often disposed of without a thought in battles such as this). 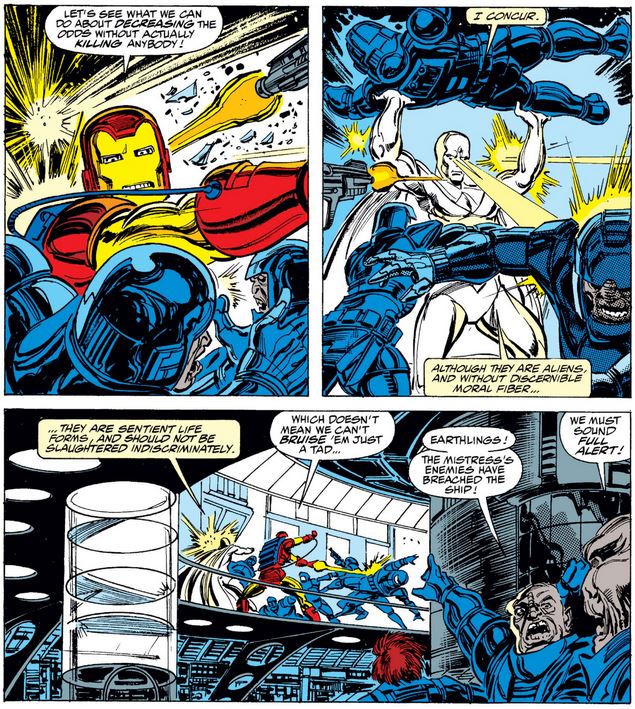 Happily for them, the cavalry is nearby, although one of them seems to have had it with informal language… 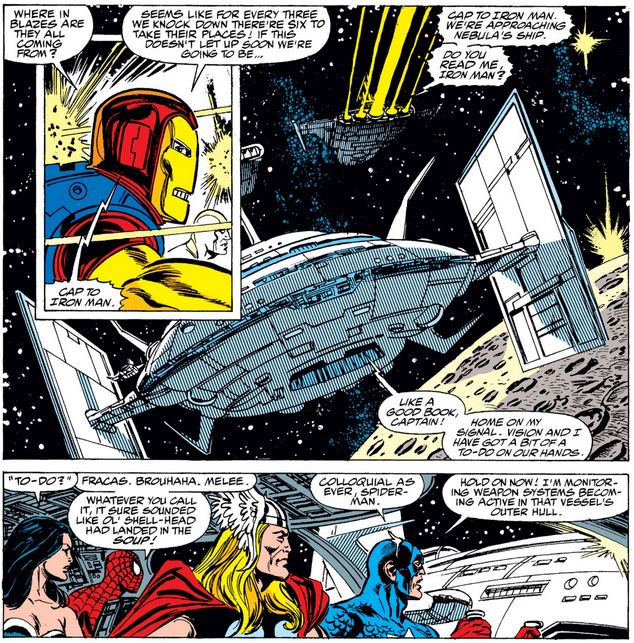 …or maybe he just wants to the be the only one to use it.

In actuality, Cap’s thoughts below reveal that he appreciates the lightness Spider-Man brings to the team.

Cap also admires Spidey’s work with the rest of the team before they play a little game of “Duck, Duck, Shield.” 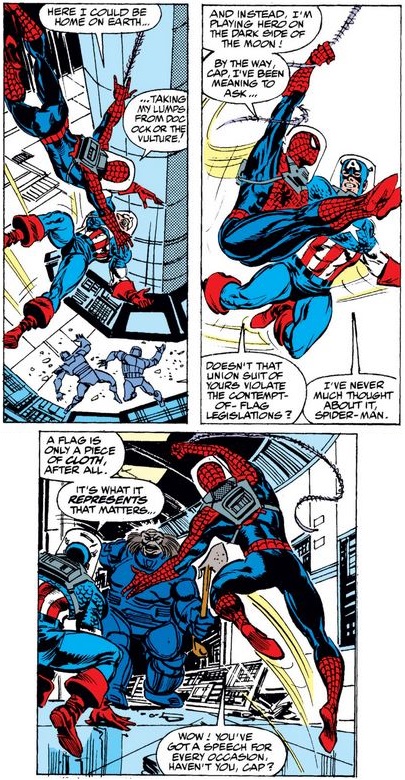 …and gets an answer based more on principle than statute. (Anyway, his outfit is not literally the flag, but simply adopts its elements, and was given to him by the US government, so he’s probably fine.)

By the time the Avengers fight their way to the ship’s bridge, they find that Nebula and her compatriots have been dealt with—and very happily, at least for them. 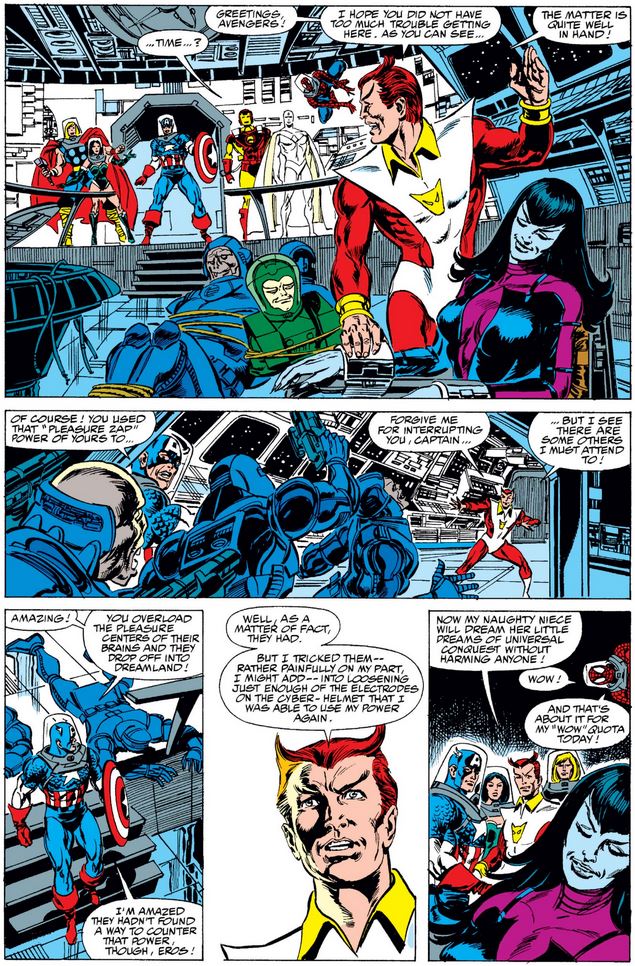 Apparently believing the adventure to be over (again), Cap extends an invitation, acknowledging the value of humor and good spirits (even over eloquently delivered statements of ideals).

The rest of the team concurs, and Spider-Man becomes a real boy—I mean, a man—no, an Avenger—at long last.

And just in time, because this story is not yet over as Cap calls out one last tune for this karaoke night. 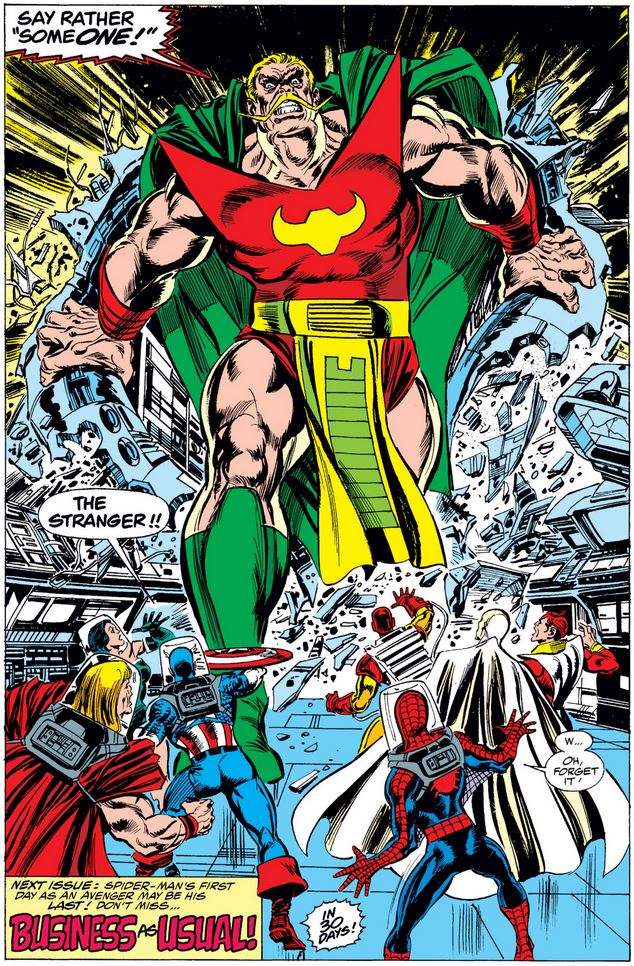 In the meantime, in Silver Surfer #36, Norrin and She-Hulk act like they’ve never met (?) and mix it up before Cap breaks up their fight and gives Jen a stern talking-to.

At this point, the Surfer also knows little about Thanos, so he has come to Avengers Mansion because Google hadn’t been invented yet, and in the process gives Cap a much-needed update on the Mad Titan as well.

Cap and Norrin spend the next few pages swapping intel, with the latter spoiling the premise of the upcoming miniseries The Infinity Gauntlet (not to mention the last two Avengers movies).

…and questions the Avengers’ membership policy because of it. (Don’t tell him they just let Spider-Man join!)

Collected in Spider-Man: Am I an Avenger? (and eventually in volume 19 of the Avengers Epic Collection).

Not yet collected (but eventually in volume 4 of the Silver Surfer Epic Collection).