This issue not only continues the “Streets of Poison” storyline begun in issue #372, but it also follows up on Captain America’s appearance in Daredevil #283, which took place in middle of Captain America #374. (Got it?) There, Cap and Matt had a deep conversation about the state of America in 1990, but in this issue, they don’t talk as much, as suggested by the cover, including the tagline “Cap Goes Wild!”, due to the effects of the explosion in the drug lab in the first issue of the current story.

Before we get to those two, however, the issue picks up where the last left off, with Diamondback and John Jameson being gunned down on the streets of New York, which leads John (and the reader) to think twice about the received wisdom regarding Rachel’s moral character (as well as reinforcing the growing feelings he has for her).

Meanwhile, Cap is on the hunt for information—in the style of Daredevil, as it happens…

…but a little “wilder,” causing him to look and act more like John Walker than Steve Rogers.

When “Jerkweed” takes one of his customers hostage to try to deter Cap, our hero calls  “language!” before executing an impossible but nonetheless very cool trick with his shield. 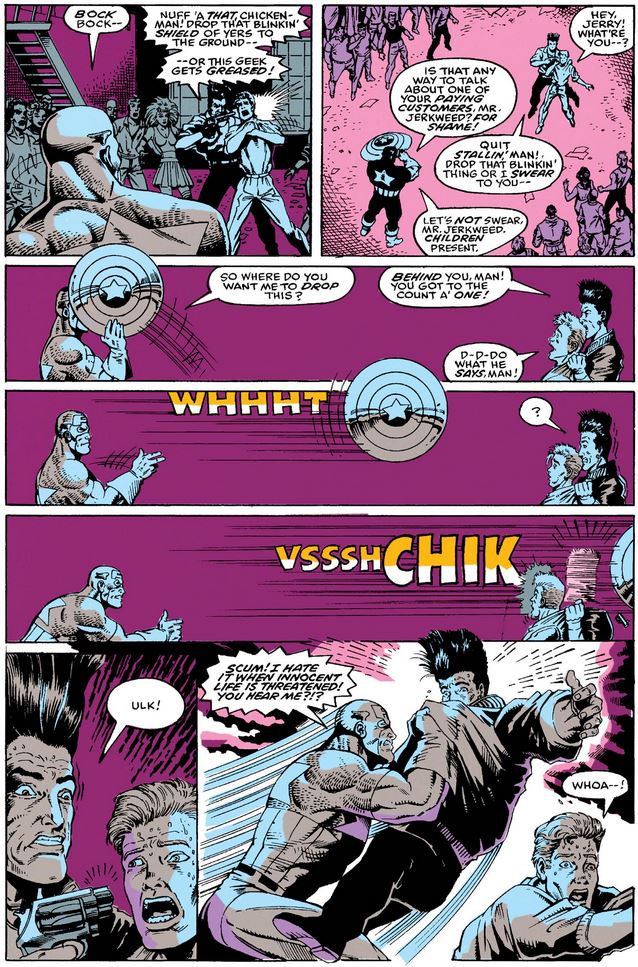 (I know, Cap’s vertical shield throw is almost a tradition by now, but still.)

Cap gets mad enough to pull a Batman on Jerkweed, pushing him out a window, only to surprise him with a soft landing on Cap’s sky-cycle.

And not to make too big a deal of it, but that last comment was definitely not typical of the Sentinel of Liberty. (Frank Castle would be proud, though.) Jerkweed, perceptive soul that he is, picks up on this too, even as Cap steps it up by holding the drug dealer high over Manhattan to get information on a certain Kingpin of Crime. 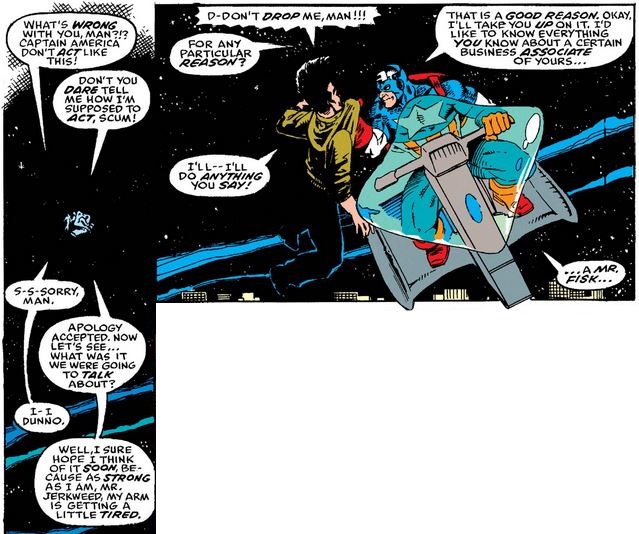 Apparently it worked, because Cap visits Fisk to deliver some restaurant criticism, and asks for a side of combat instead.

As uncharacteristic as this behavior is for Cap, I find it somewhat refreshing to see someone (other than Spider-Man) be so snide with the Kingpin, as opposed to Daredevil’s more existentially tortured arguments with him in recent years. 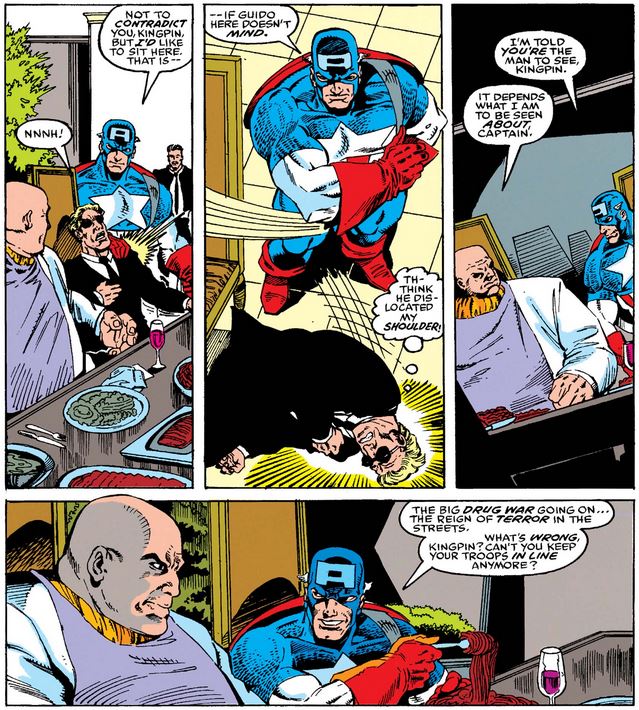 Cap tries to get Fisk to reveal who his competitors are, but the Kingpin is too smart for that… and you have to respect his sheer facetiousness in the second panel below.

After frustrating Typhoid Mary and leaving the Kingpin behind, Cap runs into Daredevil…

…who just wants to make sure his fellow hero is OK (and maybe pick up some cannoli). But Cap responds with a denial typical of drug user, and then pushes things too far. 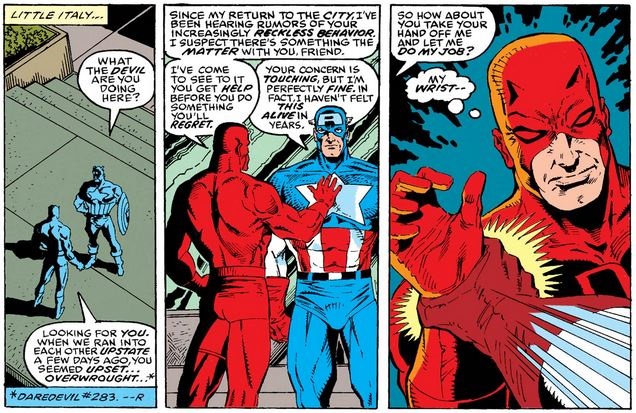 It’s on! And Cap isn’t holding back, as Matt realizes very quickly.

Daredevil leads his combatant to a safer place to fight, and Cap switches from insults to a more direct attack. 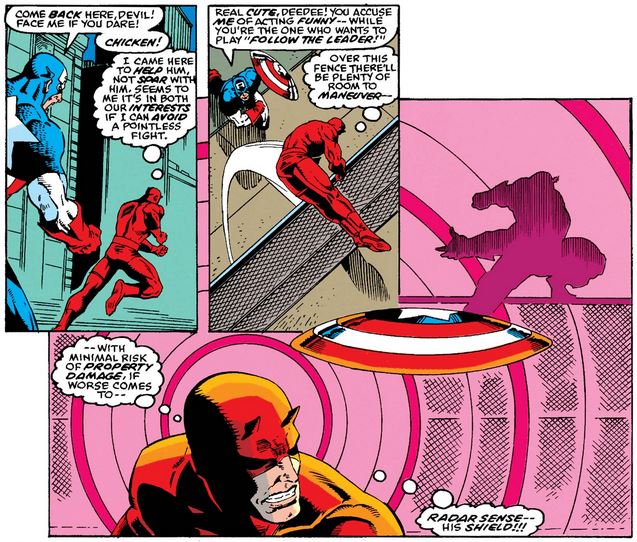 Unlike Cap, Matt’s not old enough to have played with a hoop and a stick when he was a kid, but he comes close with his trick below.

Meanwhile, Cap steps up the paranoia—while denying it—and we get a clue as to how Matt perceives Cap’s vitals (as I mentioned with respect to Daredevil #283) while he bemoans the fact that he’s not up to speed himself after his own recent adventures. 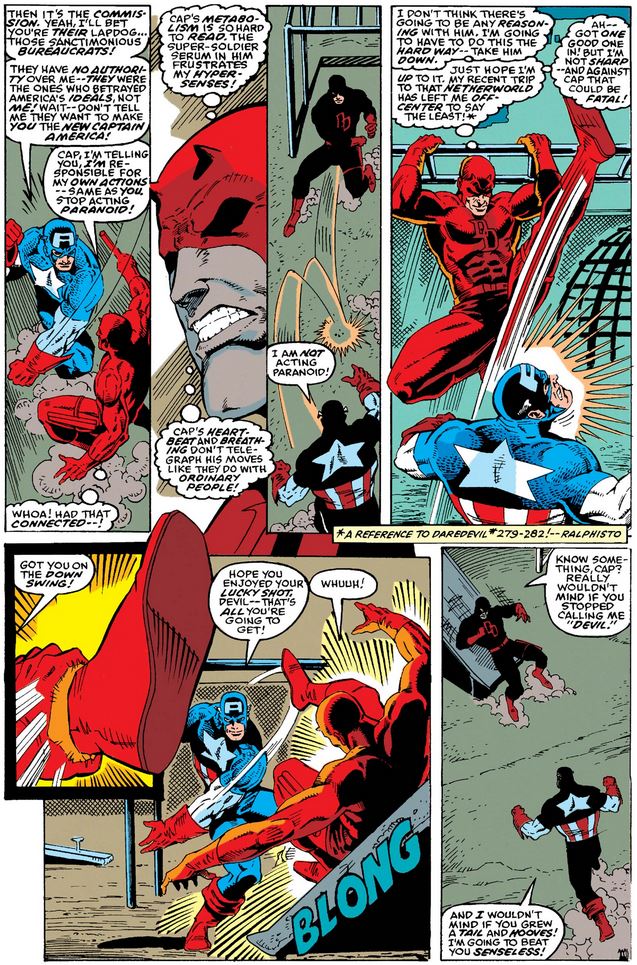 …and Matt realizes he might be outmatched, especially against an opponent who isn’t pulling his punches. 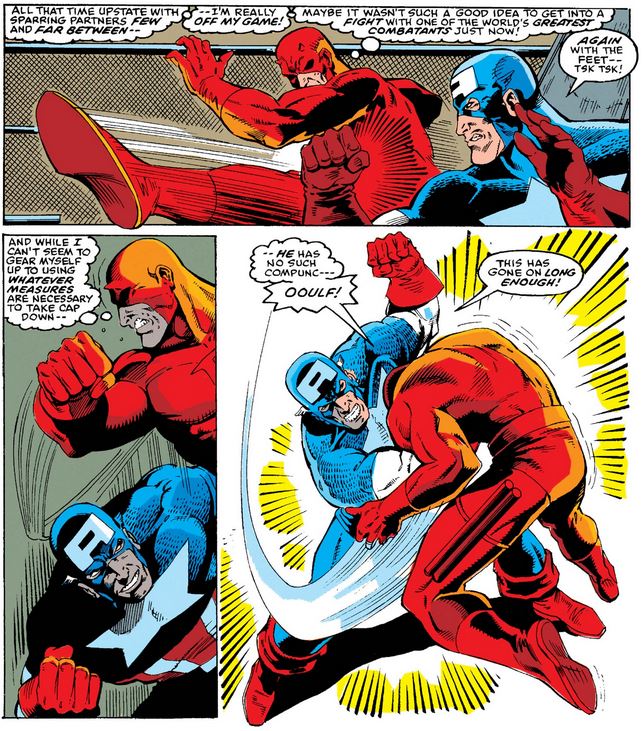 And with one strike it’s over.

Unfortunately we won’t see any of that bout in the next post, where we wrap up this storyline as Cap descends further into his drug-addled state and his friends have to take radical steps to cure him.