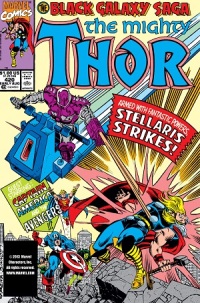 These two issues of Thor are part of a larger story called “The Black Galaxy Saga,” in which the God of Thunder is called to… well, you know… in response to the latest scheme of the High Evolutionary. The story began in issue #419, where a Replicoid was sent by the Celestials to gather Thor, but before they could finish their discussion, they were ambushed by Stellaris, “the Celestial Slayer.” This causes a ruckus sufficient to attract the notice of the Avengers, which is where we come in.

In fact, based on the first page of issue #420, you might wonder whose book this is if it weren’t for the logo at the top. 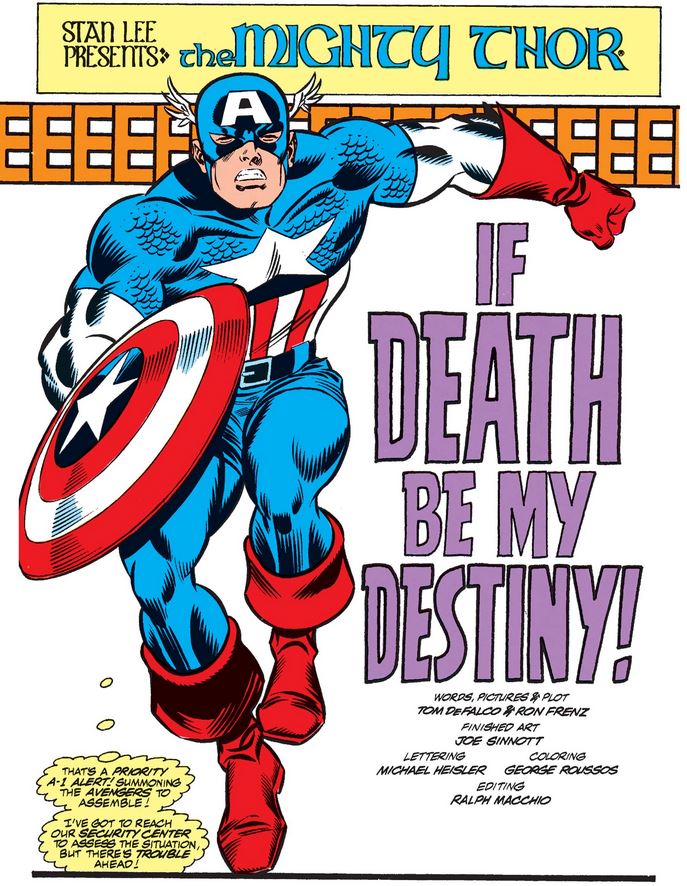 He could have simply said “excuse me,” but no. 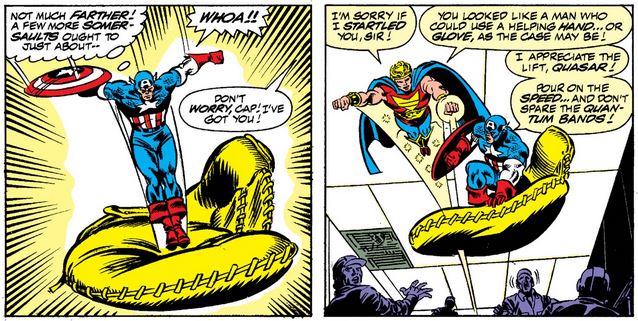 Once Quasar gets Cap to Peggy Carter’s desk for the news, we see our Avengers team for this story, with Sersi in both flirty and condescending mode. 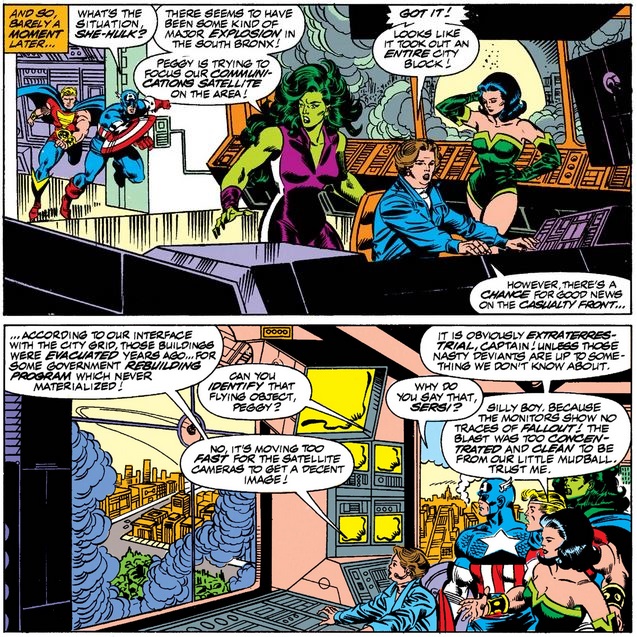 Cap orders the team to the scene, unaware that the Avenger he asks Peggy to contact is already in the middle of it. 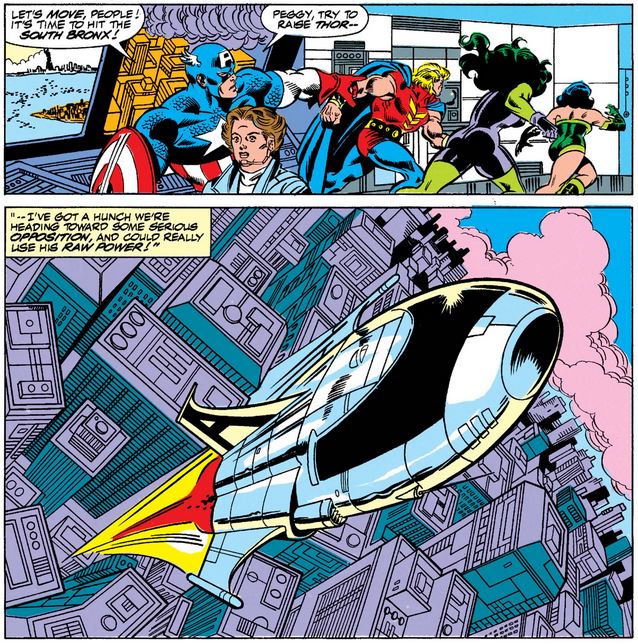 When the Avengers arrive, Stellaris is bearing down on Thor and the Replicoid, until Cap gets his attention… 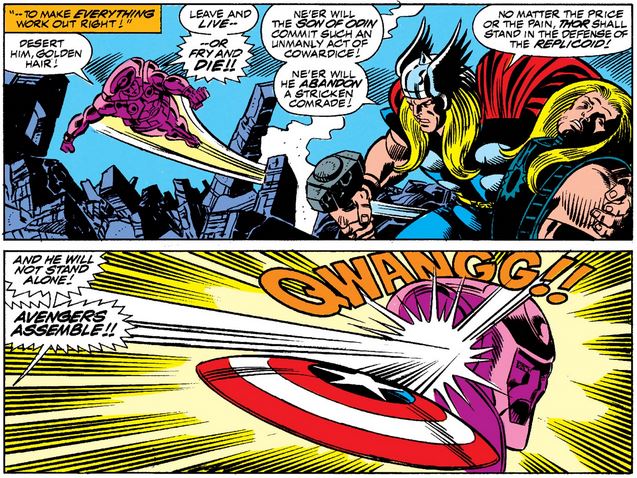 …and recommends caution to the rest of the team, including the designated suck-up. 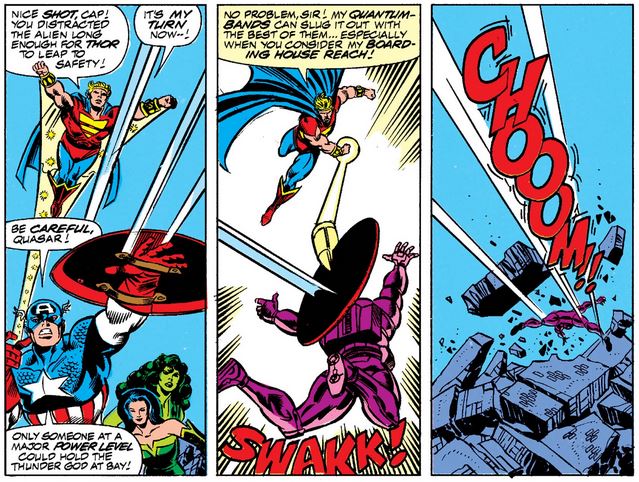 In case there were any doubt, Stellaris lets the Replicoid know why he’s called the Celestial Slayer, and Cap shows he is never one to abandon an effective tactic… 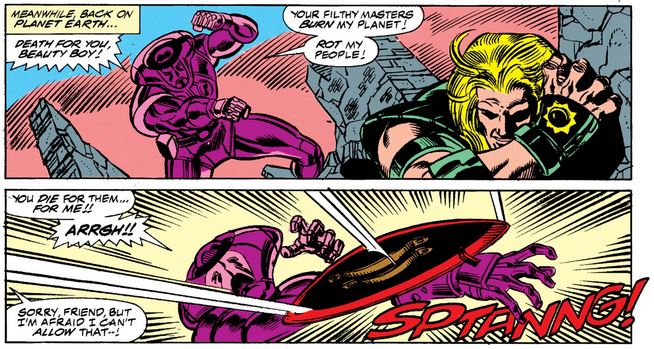 …before lecturing Stellaris on the sanctity of life and the problem with “justified” murder. 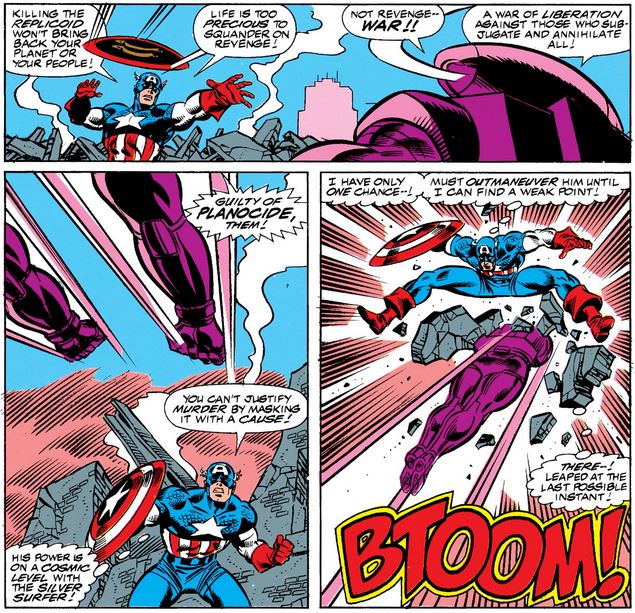 (It’s always nice to see the little Kirby touches throughout Ron Frenz and Joe Sinnott’s art, such as Cap’s spread-legged leap in the last panel above.)

Stellaris didn’t appreciate Cap’s first lesson, but nonetheless our hero delivers another in explanation of his effective judo skills. 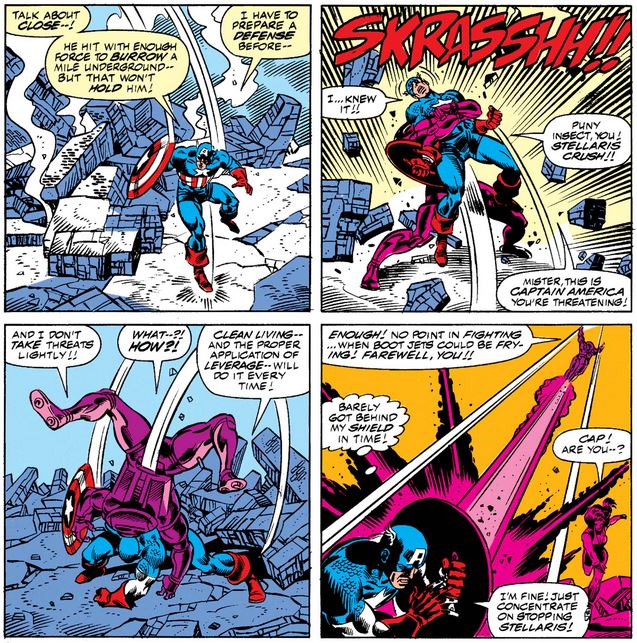 After Quasar stops Stellaris from escaping, the Avengers surround him, and the main character of the book gets to give the team battle cry. (Hey, I don’t make the rules.) 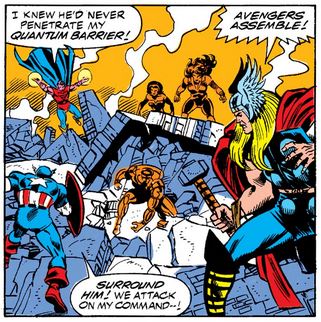 The Replicoid serves up a dose of realism—which really brings the mood down, if you ask me—and implores Thor to leave with Hercules (his current roommate) for the Black Galaxy, before being killed by Stellaris. Thor is enraged with vengeance, which Cap would normally argue against, but we can assume he realizes it wouldn’t work with Thor in his current state of mind. 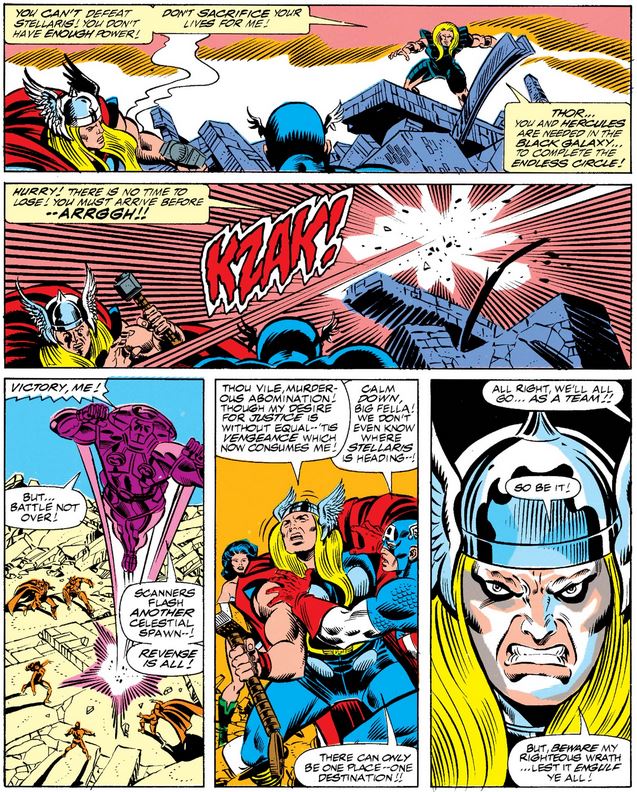 We see in issue #421 that Stellaris left to find Hercules, who is at the apartment of Eric Masterson (Thor’s current human form), protecting Eric’s son Kevin, who is very impressed at the sight of Captain America (after just realizing that his dad’s pal “Harry Cleese” is actually Hercules—what a day for Kevin!). 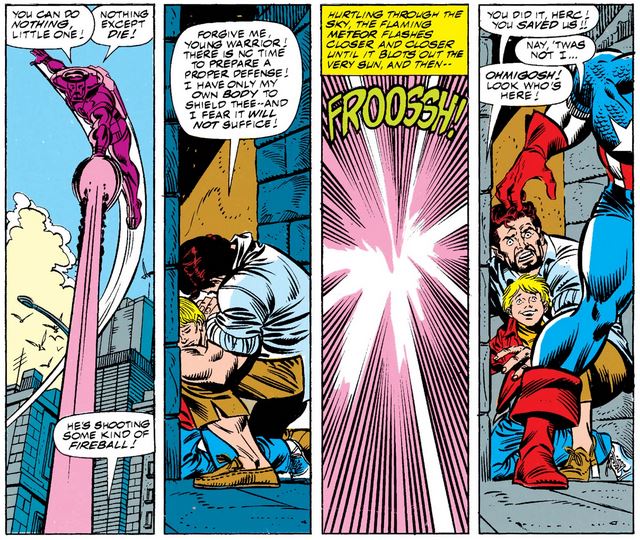 Even in Thor’s book, Kevin gives Cap first billing, while Sersi shares our appreciation for his virtues (in her own way). 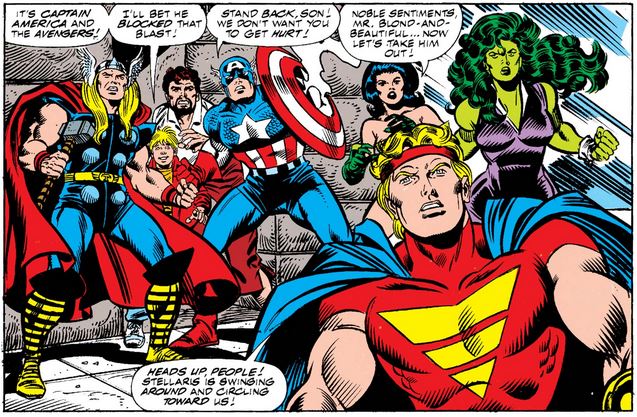 She does, however, manage to slow Stellaris long enough for Thor to reclaim center stage… 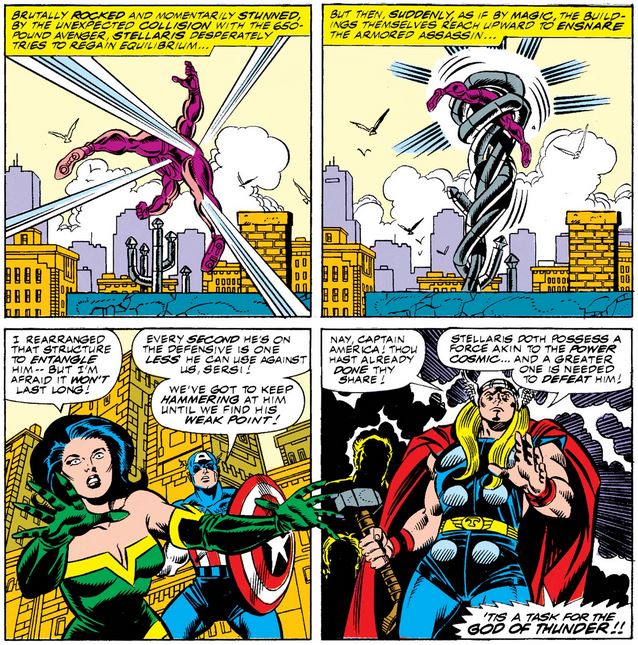 …and to tell his fellow Avengers (and Hercules) that this is a fight Thor must fight alone, which Cap endorses (especially after Thor made sure innocent citizens were protected). 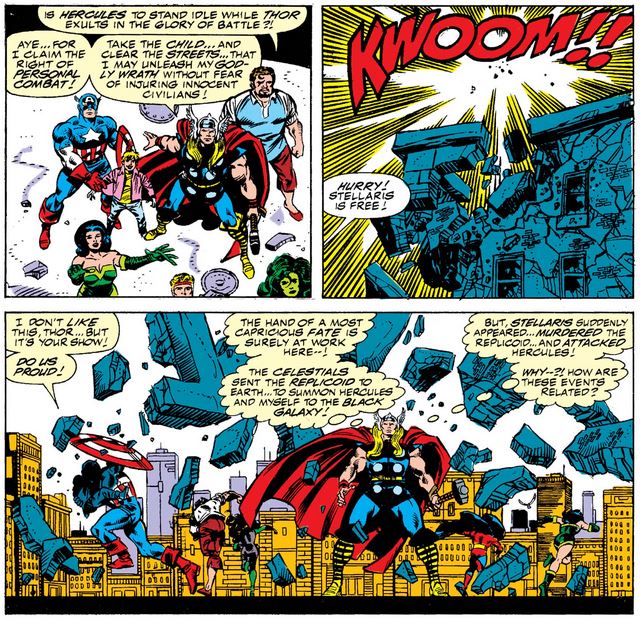 After Thor manages to defeat Stellaris, he discovers he made a flawed assumption, which his foe had banked on. More important, she makes a threat that can only prompt one response from Captain America—which he firmly asserts to Thor (using the “voice that can command a god“). 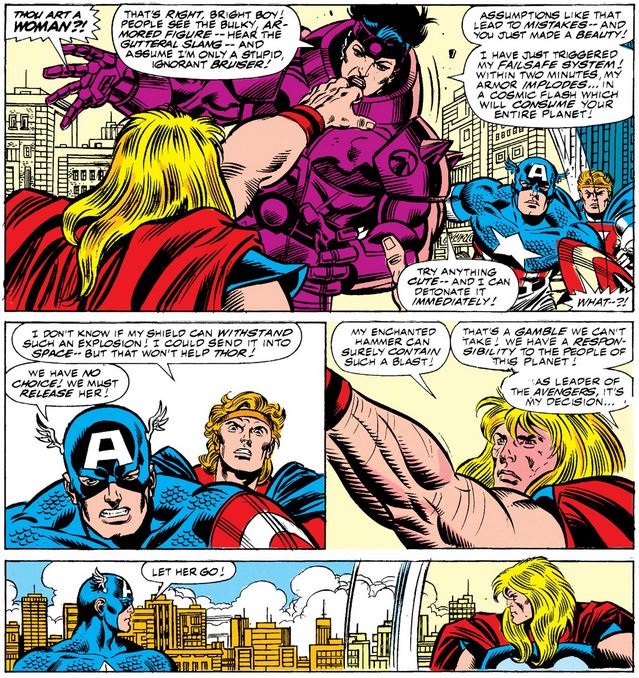 But when Cap offers the Avengers’ assistance in tracking Stellaris, Thor puts his foot down, which Cap accepts, sensing once again that now is not the time to fight his old friend. 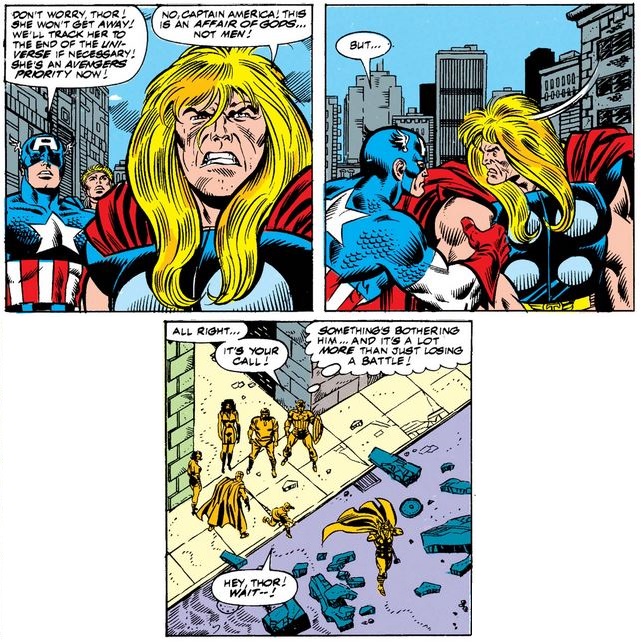 While Cap says goodbye to Kevin the only way he can, we see what was bothering the God of Thunder: Eric Masterson has been locked in a custody battle with his ex-wife, and he now realizes he has to relinquish his parental claim to Kevin so he can go to the Black Galaxy as Thor. 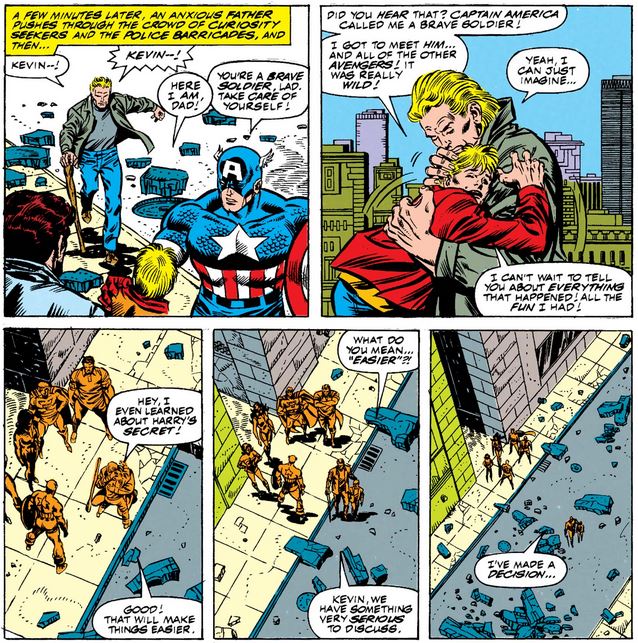 Later, in Eric’s apartment, we see a very touching scene of a father having to say goodbye to his son… 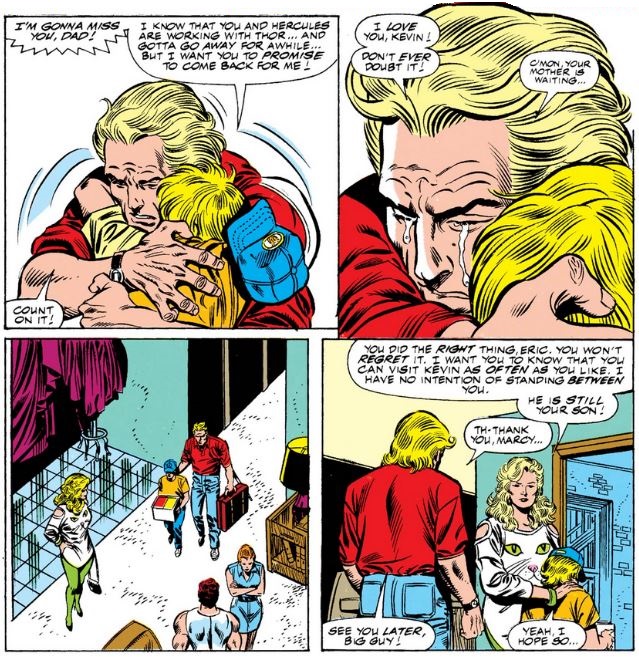 …and a friend providing comfort when it is sorely needed. 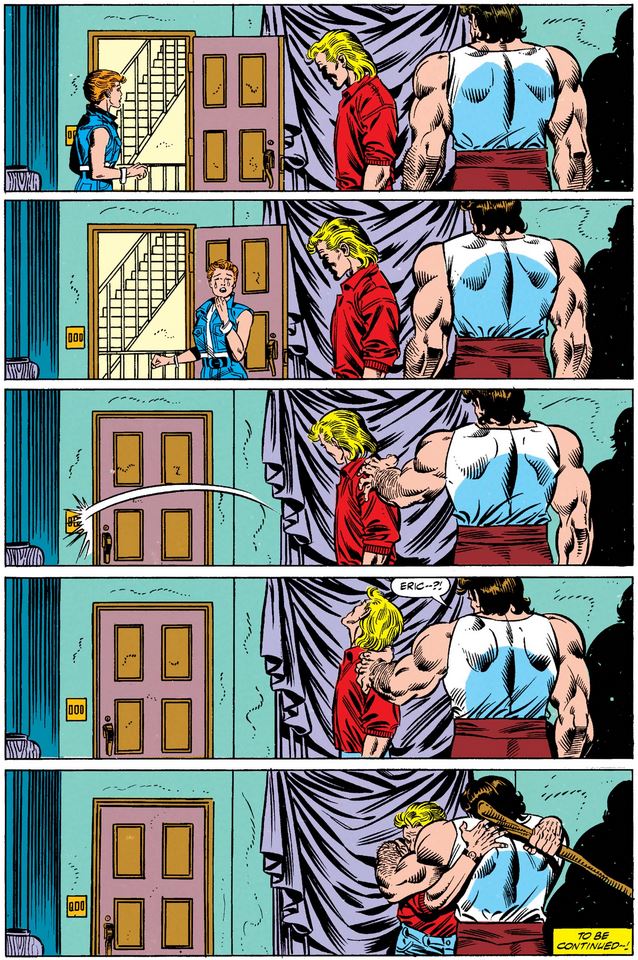