This three part story is based on repeated cases of mistaken identity, thanks to an old Avengers foe that is often responsible for such things, and sees Spider-Man join forces with a new team that does not quite measure up to his alliances in the past (including his guest-stars).

In issue #168, She-Hulk leads Spider-Man to a condemned building where they open a crypt and release a strange black substance—not a symbiote—after which Spidey becomes trapped in the crypt and She-Hulk abandons him to die. After he frees himself, Spider-Man calls on She-Hulk at the Avengers’ headquarters, literally alarming the entire team in the process.

Apparently Cap’s exhortation to the others to relax was premature. 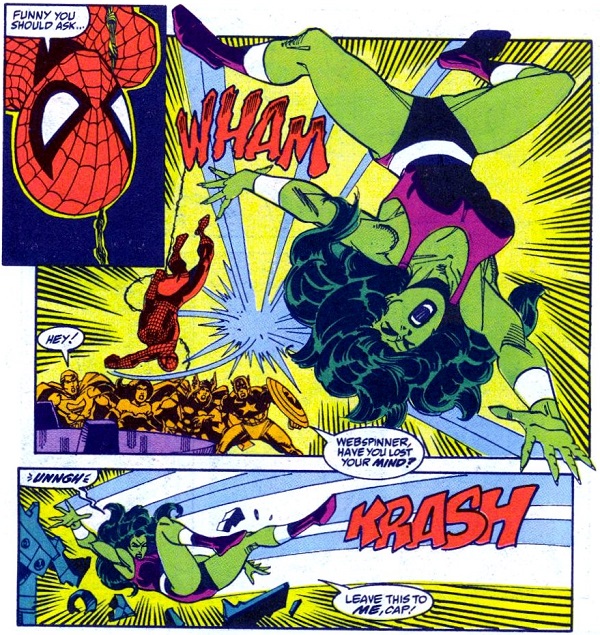 She-Hulk assures Spidey she was at Avengers headquarters all day, and when he doubts her, Cap really takes offense—and provides hard evidence to back her up. 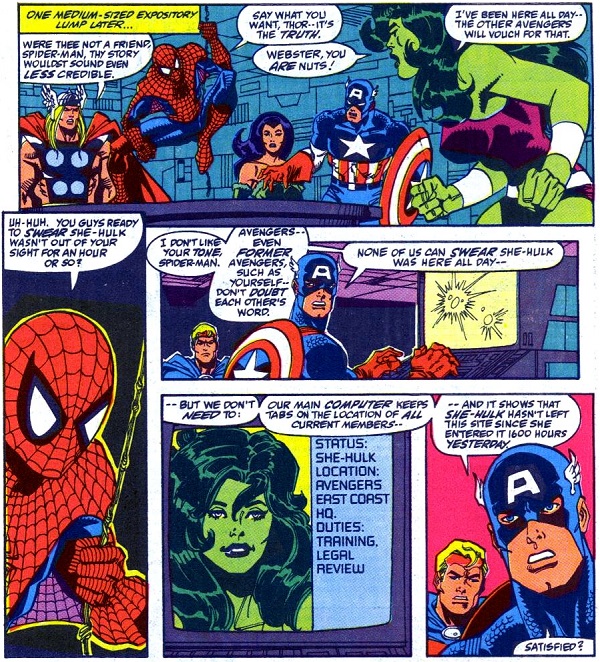 Spidey still doesn’t believe them and swings off in anger, and the Avengers see more guest appearances in their future.

In issue #169, your friendly paranoid Spider-Man gathers the Outlaws, a team of A-list and B-list villains he has worked with before, to help, and even if it makes him feel better, the Observant Avengers feel differently.

This gives us one of great understated Captain America panels ever.

The Avengers cast their votes on their next step, with Thor and She-Hulk, against type, recommending patience, and Sersi and Quasar giving Cap their proxies… which he uses to side with the first two. (Democracy in action!)

The Avengers confront Spidey again, but his grasp of logic does not impress.

In issue #170, Spider-Man and the Outlaws ambush the Avengers—seriously.

Then, to make matters worse, Spidey dredges up the old canard about Cap’s costume, given to him by the United States government, abusing the American flag.

Spidey tries to get the Outlaws to join the fight, but they are understandably hesitant…

… but it’s too late to back down now, because the gauntlet has been thrown (which is to say Cap gave the battle cry).

While the two teams fight, Spider-Man disappears and reverts to the Space Phantom, the foe from Avengers #2 (pre-Cap!) that later became a deus ex machina for resolving continuity problems. When the real wallcrawler returns, he tries to stop the fight the Phantom started, claiming he wasn’t himself… and luckily, the real culprit, who also impersonated She-Hulk at the beginning of issue #168, didn’t get away (thanks to Puma’s enhanced senses).

The rest of the issue sees the Avengers and the Outlaws defeating the black substance that came out of the crypt in issue #168—again, not a symbiote, but a swarm of… something.

When all is said and done, Spidey takes She-Hulk’s hand and apologizes to her, while his other hand rests on Cap’s shoulder, for some reason. (Perhaps to steady himself in case She-Hulk does not accept his apology?)

And who was behind the whole thing? Would you believe… a guy named Calculus? Don’t worry if you don’t know who that is—it’s not integral to the plot.