These two issues wrap up the three-part story about the “trial” of Diamondback (aka Rachel Leighton) by the Serpent Society, who accuse of her treason for consorting with Captain America. In the last issue, they convicted her to death, but their former leader Sidewinder appeared before her execution and transported her away.

Meanwhile, Cap was reunited with his ex-fiancée, Bernie Rosenthal, which has his mind in a whirl, as we see in issue #381 while he grabs a bite at a local diner with John Jameson. To his credit, he still regrets keeping his relationship with Rachel from Bernie (as noted in the last issue).

Of course, Cap does not wait until the vehicle comes to a complete stop. (Don’t do this at home, kids!) But more important, we see the return of the awesome trenchcoat, a sign that this is an important covert operation. Likewise, he’s surprised by seeing Diamondback’s out of her stealth outfit (which she adopted in issue #374), but after she updates him on recent events, his surprise turns to genuine concern for her well-being.

(And no more trenchcoat, for the record.)

Rachel and Cap make plans to bust the Serpent Society, but she wants sure two of her friends, Black Mamba and Asp, will not be included. Naturally, Cap is uncomfortable with this, preferring to let the courts settle their guilt, but when Rachel suggests they not be arrested at all, Cap seems sympathetic but noncommittal. By this, he may mean that he won’t bring them in, but he can’t promise someone else won’t arrest them, but she definitely doesn’t take it that way. 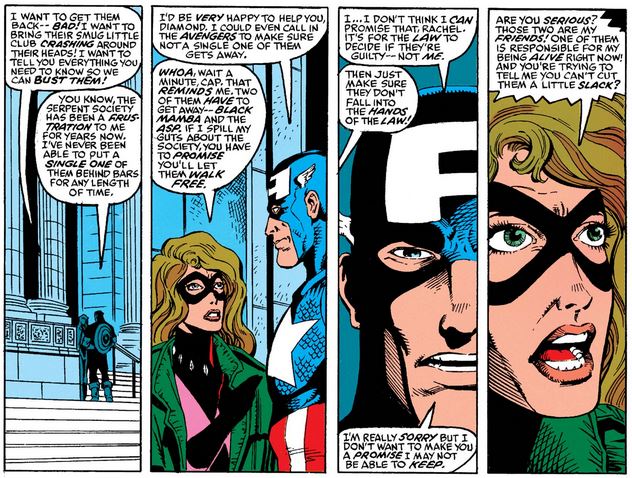 Rachel storms off and contacts the mercenary Paladin for help rescuing her friends before Cap can storm the Serpent Society… but Cap is staking out her apartment, where he finds two members waiting for her. He regrets his sneak attack, but justifies it by reference to his diminished strength due to his loss of the super-soldier serum in issue #377.

He continues to fight them—forgiving them for using the same tactics he did—but eventually they get the upper hand, which holds him suspended over the street below.

In issue #382, they drop him, recreating the cover of Tales of Suspense #96, and with no recourse to fancy acrobatics, he hits the ground hard (saved only by the force-absorbent properties of the mighty shield).

Nonetheless, it hurt (and likely would have even if he were at full strength), but it doesn’t stop him from joining John to track the snakes, with Cap giving the young man some well-deserved praise.

Cap finds one of the Society’s aircraft descending into a building and rides down with it, after which he makes much easier work of the two Serpents he first encounters inside.

While Cap makes his way through the Society headquarters, let’s check in with Bernie, who’s confiding to their old neighbor Mike Farrel that she definitely has plans concerning her ex. 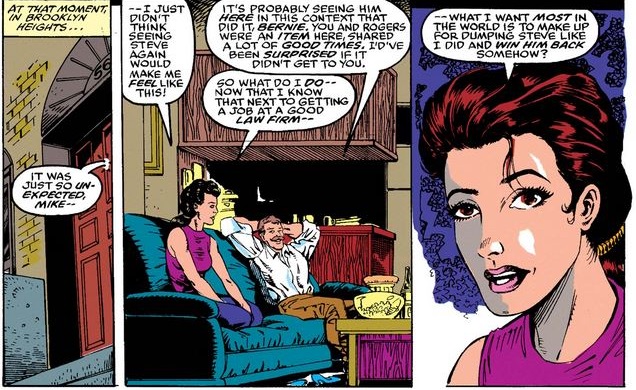 Mike may not know Steve Rogers is Captain America, but he knows him well enough to realize Bernie will have to hit him over the head with this news rather than drop subtle hints. (It’s nice to know Cap and I have something in common… besides being 6’2″, that is.) 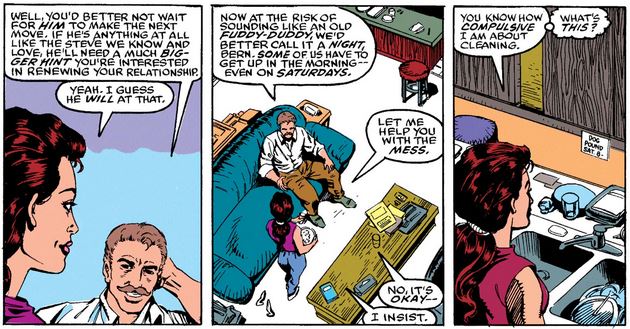 That note Bernie sees leads to something that will be picked up in issue #385… but for now, let’s get back to Cap’s continued fight through the Serpents, until he finally finds Diamondback and Her Amazing Friends (including “this guy–Paladin”).

I didn’t hear anybody mention rights, but Cap lands a nice one nonetheless before Cobra slithers to Diamondback and threatens her life… 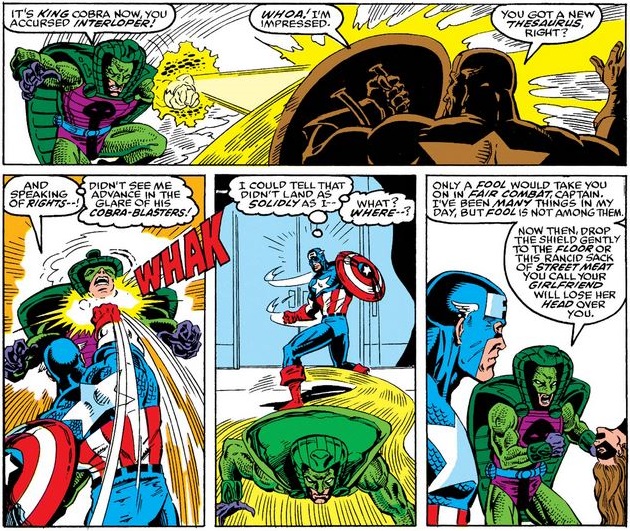 …which elicits some more hair-splitting with respect to honest dealing from the Sentinel of Liberty. 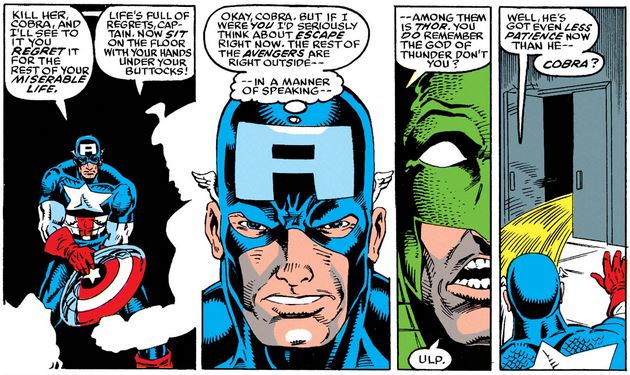 …and as they head to find the antidote, they run into even more snakes, who call Cap on the accuracy of his insinuation above.

Unlike Avengers #327-328, where Cap and the team were in an alternate dimension with different physics that might allow a curved disc to travel vertically, it can’t happen here, but somehow still does. 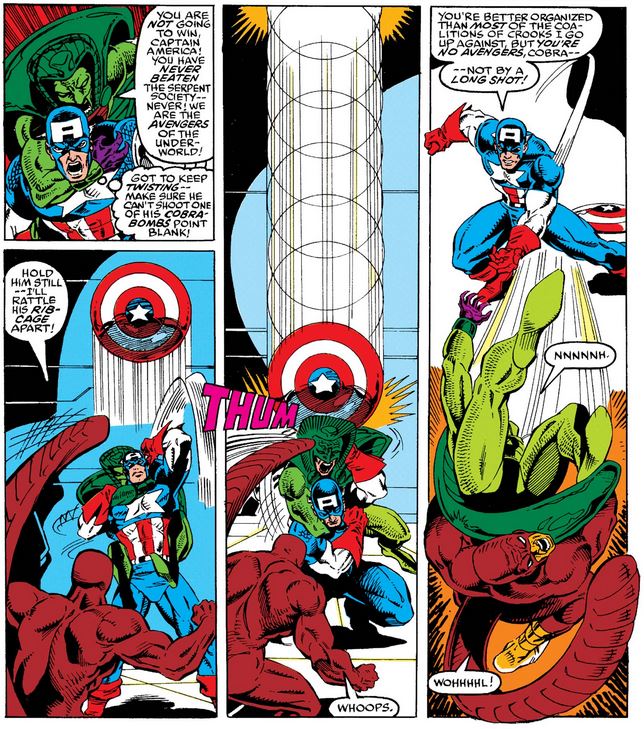 This adventure has the benefit of helping at least of Rachel’s friends understand her feelings for Cap.

When the Serpent Society is all wrapped up and Rachel has gotten her antidote, Cap does manage to keep Black Mamba and Asp out of the authorities’ hands, presumably because of how they helped capture the rest of their teammates.

Rachel had promised Paladin a date if he helped her, but she seems to flaunt it in front of Cap—does she still hold a grudge, even though Cap kept her friends free (which she acknowledged above)?

Cap wonders about this too, and when a lady comes a-callin’ lter, he hopes it is Rachel… but it is not.

This soap opera will continue in issue #385—in the meantime, we have a fiftieth anniversary issue to cover, and then a resolution to the question of Cap’s missing super-soldier serum, which may not be missing after all.

Both collected in: Captain America Epic Collection: Streets of Poison