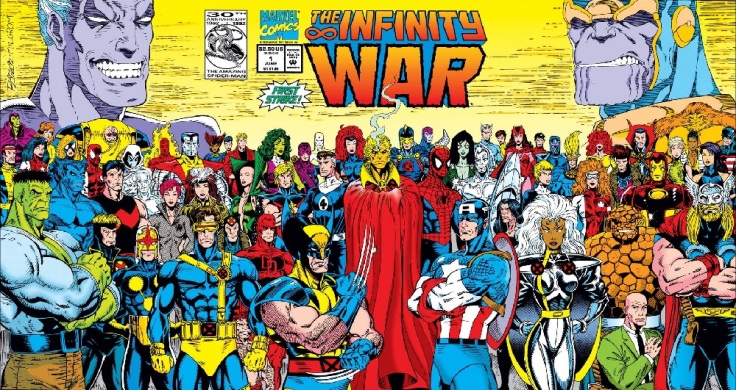 This month sees the beginning of Infinity War, the sequel miniseries to Infinity Gauntlet, which inspired the film Avengers: Infinity War. (Got it?) We’ll do this one a couple issues at a time rather than all at once, for two reasons: Captain America appears more regularly (although still not a lot) throughout the miniseries, and starting in August there are a lot of tie-ins to each issue, some of which simply duplicate scenes from the main series, but others do add to them, and the latter will need to be covered (briefly). Also in this post we have a couple panels from the final issue of a distinctly lower-profile miniseries, Death’s Head II (derived from a Marvel UK character), that didn’t fit anywhere else (especially since Cap won’t be in Avengers for a while but is still appearing with the team in other titles, oops).

There are a lot of moving parts/subplots in Infinity War, and Cap only appears in some of them, so as always with this type of story, do not expect detailed synopses of the entire thing. In fact, Cap only appears briefly (and silently) in Infinity War #1, as Reed Richards summons the Legion of Super-Teams to confront the latest threat… 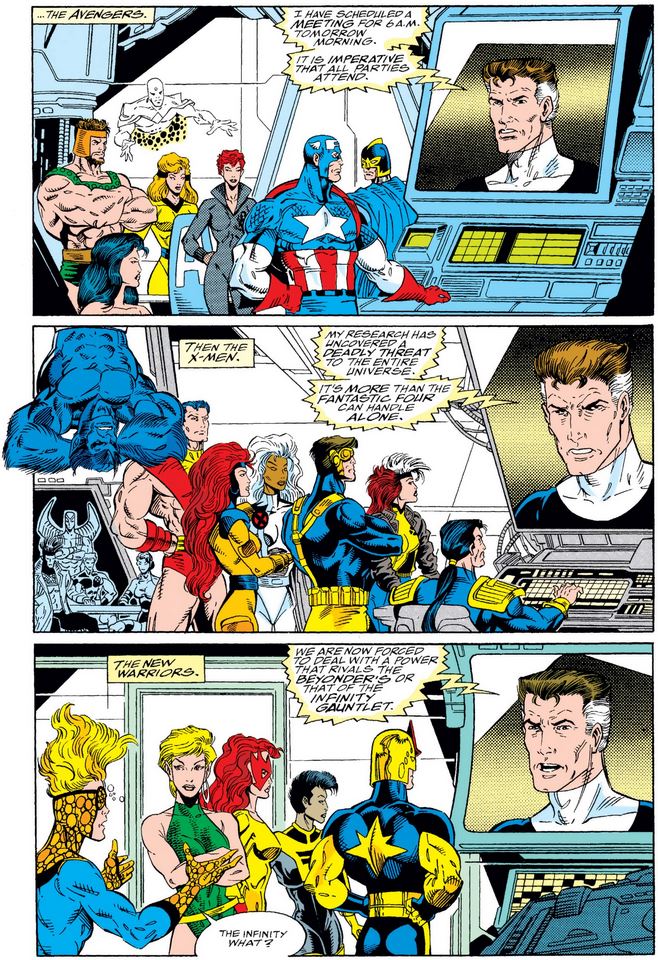 …but is just a big ol’ tease with respect to any details.

This may be due to the fact that this is actually not Reed Richards but an alien replacement, as  happens to several heroes over the course of this issue—you could almost say it is an invasion that is secret—and it’s all the work of the fella below, an evil future version of Adam Warlock from another dimension.

All the Avengers and non-Avengers assemble in Infinity War #2, and the adage about herding cats applies, especially the big green ones. (Cap looks like the fake Reed’s hired muscle here, but I interpret this as Cap lending his authority and leadership to the man he thinks is a valued colleague.)

Iron Man—actually his alien replacement, but you could easily confuse it for Tony in one of his “moods”—finally arrives and tells the group that Hawkeye (who was replaced) and Spider-Man (who defeated his replacement before being defeated by the imposters Iron Man and Hawkeye) won’t be coming, and Professor Xavier makes a mental note to talk to Wolverine (who has defeated his imposter and will show up soon). “Reed” gives a fairly accurate account of what happened to him in the last issue, leaving out the fact that he is the “nearly exact double.” 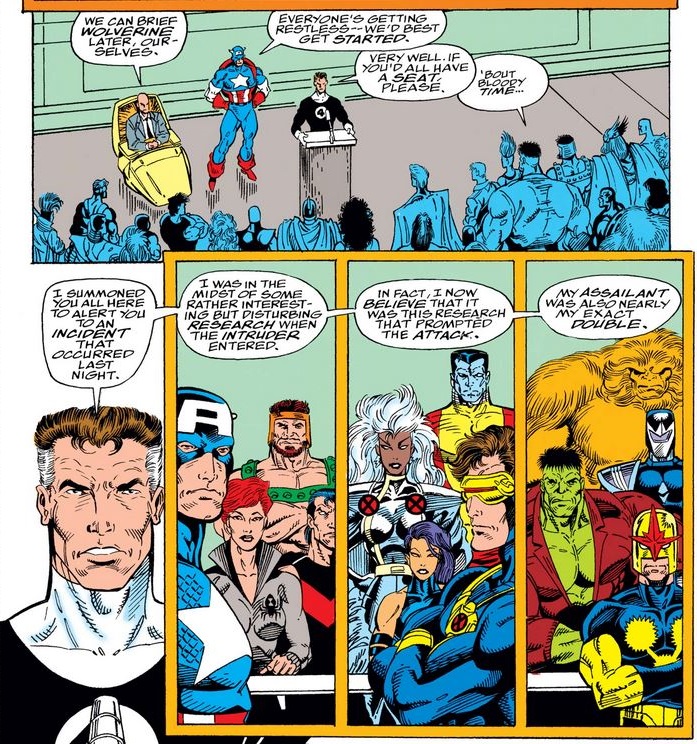 Some of the heroes, including Daredevil, are respectfully skeptical that anyone could duplicate anyone that precisely, given the unique physiology of someone like Reed, until Wolverine barges in, with his own story of fighting an imposter, and calls out Reed and Tony as imposters themselves. (I wonder how he can smell anything with all that cigar smoke in front of his face.) 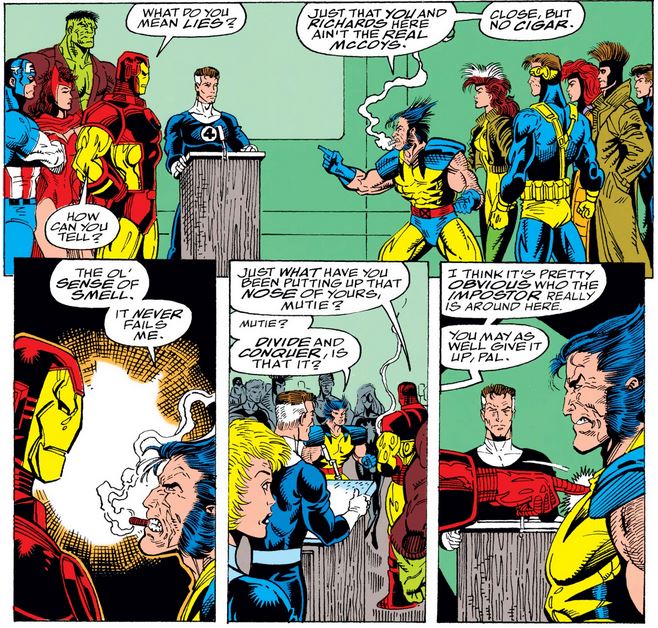 Of course, “Tony” counters with the classic “nyuh-uh, you are” response, and as Cap says below—that’s him in the back of the first panel—they appear to be at a stalemate. Colossus calls out Reed on his simplistic analysis of strategy (which could go on forever), and the rest of the heroes try to figure some way out of this conundrum.

After his brief crisis of confidence when confronted with the possibility that someone smells better than him, Daredevil is clearly on to something, and below he seems to figure it out…

…although we’re never told exactly how or why.

Given that Matt mentioned the podium, we can assume he “saw” the gamma bomb inside it, which the fake Reed activates when he decides the ensuing battle—between those who believe Reed and Tony are imposters and those who don’t—is not going his way.

Moondragon and Pip (from Adam Warlock’s Infinity Watch, a group of beings entrusted with the Infinity Stones after “Infinity Gauntlet”) arrive just in time to see the big green blast.

This certainly doesn’t look good for our heroes… come back for issue #3 to how (or if) anybody possibly survives this!

Coincidentally, Death’s Head II #4 also involves versions of our heroes from another dimension: Below, several people from that dimension meet the (oddly colored) 616 versions, led by a commanding yet polite Captain America.

Soon, after their colors and corrected and they are joined by the Fantastic Four (and what we can only hope is the real Reed), Cap leads the entire group to figure out “what happened here.” (If he doesn’t know, I certainty don’t.)