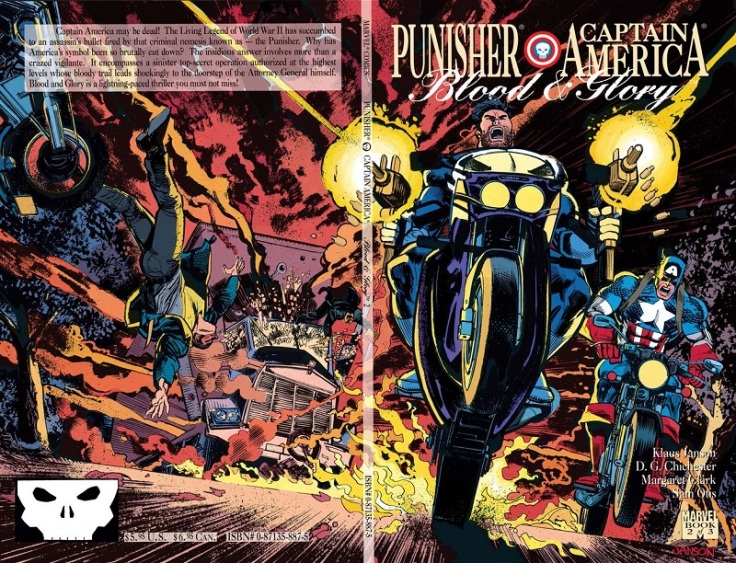 This second issue of the miniseries Blood and Glory opens after Frank Castle’s apparent assassination of Captain America at the end of the first issue, as Cap was gradually uncovering a government conspiracy involving drugs, guns, and General Navatilas, the dictator of the (fictional) South American country of Medisuela, whom forces in the American government are enlisting to fight his communist neighbors. In this issue, Cap and Frank might get to know each other a little better… that is, if Cap doesn’t die, of course.

Below we see the grisly aftermath of Frank’s actions as Cap is wheeled into Walter Reed National Military Medical Center, accompanied by Nick Fury… 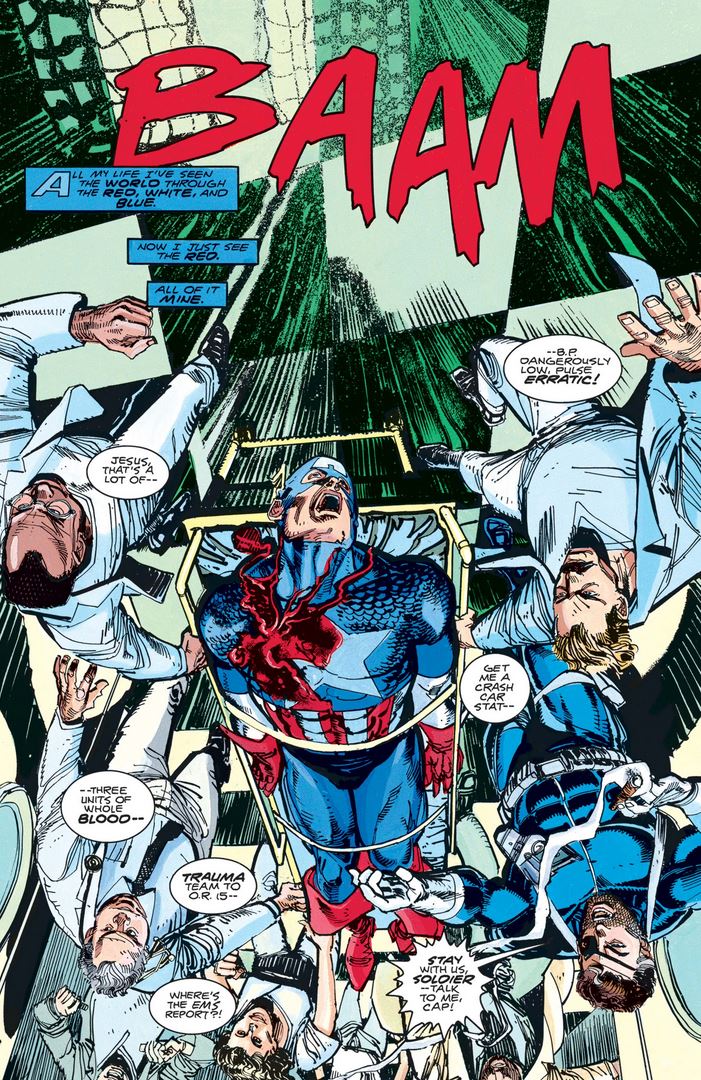 …smoking a cigar, of course. While the Contessa Valentina Allegra de la Fontaine examines him, suggesting his chain mail tunic may have saved his life (again), Cap tries to explain the conspiracy he’s uncovered. 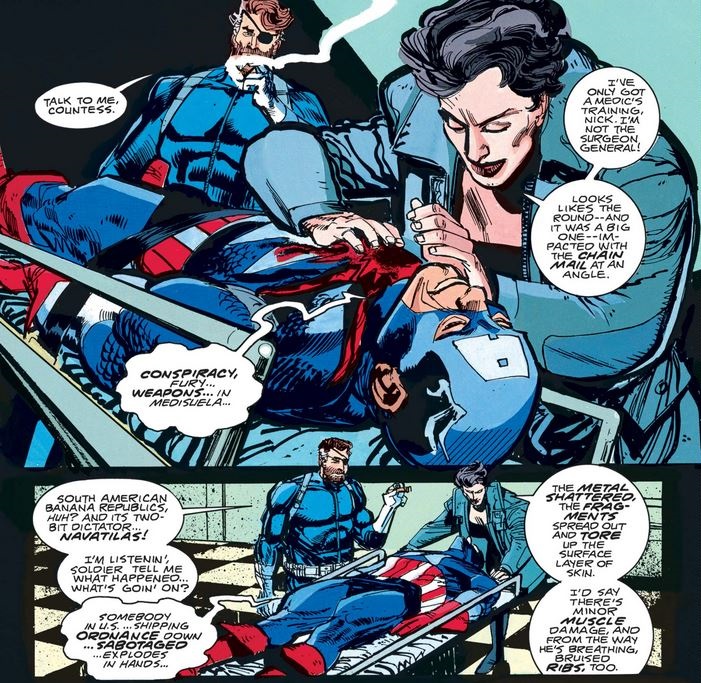 After the Contessa de Medici—get it, she’s a medic, ha ha—gives Cap a “clean” bill of health, Nick promises Cap whatever help he needs, but the (Barely) Living Legend of World War II has just one request. 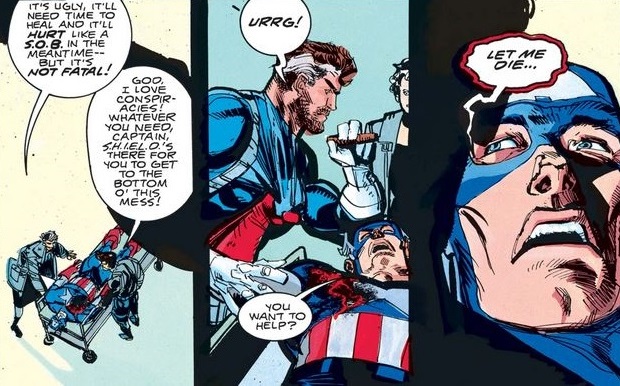 Cap was too weak to make air quotes with his fingers when he said that, but I’m sure Nick understood that Cap wants the world to think he’s dead so he can more easily get to the bottom of what’s going on. And as we see before, the world does believe it—but does not believe that Nick’s hands are clean. (No good deed goes unpunished, right?) 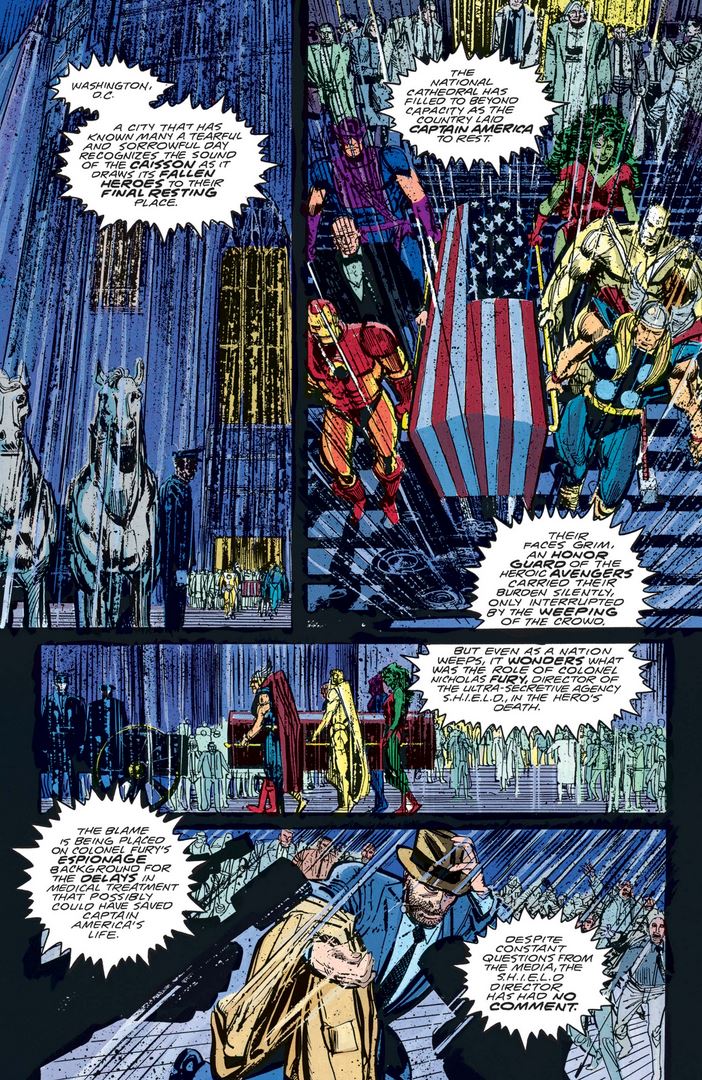 Speaking of punishment, we see elsewhere that Frank learns more about the depth and source of the corruption in the government from a low-level government insider named Booch over a diner meal, and starts to realize maybe he oughtn’t have shot Captain America after all.

Cap reveals himself after the Defense Intelligence Agency goons from the last issue beat up Booch outside the diner. He orders them to call for help… 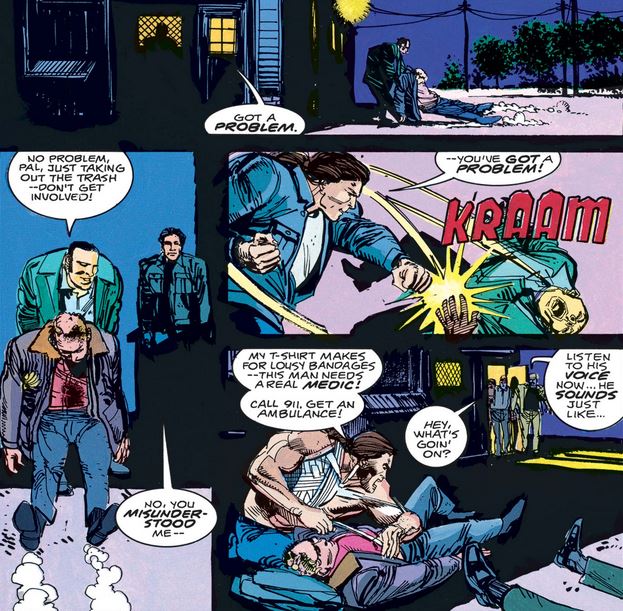 …and they actually listen, such is the voice of Captain America. (If it can “command a god,” it can certainly command these guys.) 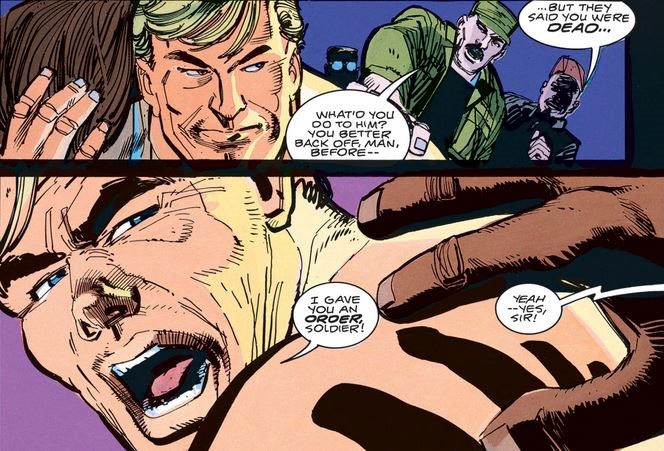 Meanwhile, Castle is in a motorcycle chase with the other DIA thugs, and just as two of them have him in their sights, another fella on a bike rides by… 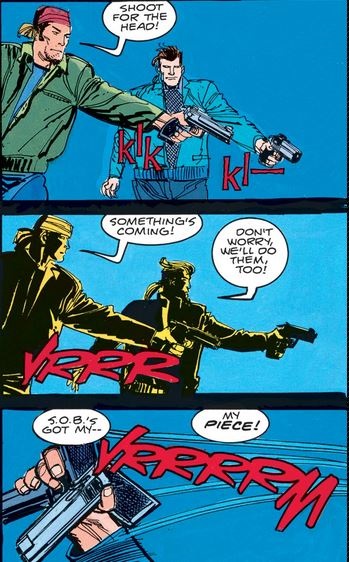 …a fella whom one can hardly believe was on death’s doorstep not long ago.

As Cap watches the last of the DIA men escape in a semi, Frank starts to doubt his skill, and Cap nails the dark comeback (muttered through gritted teeth, one hopes). 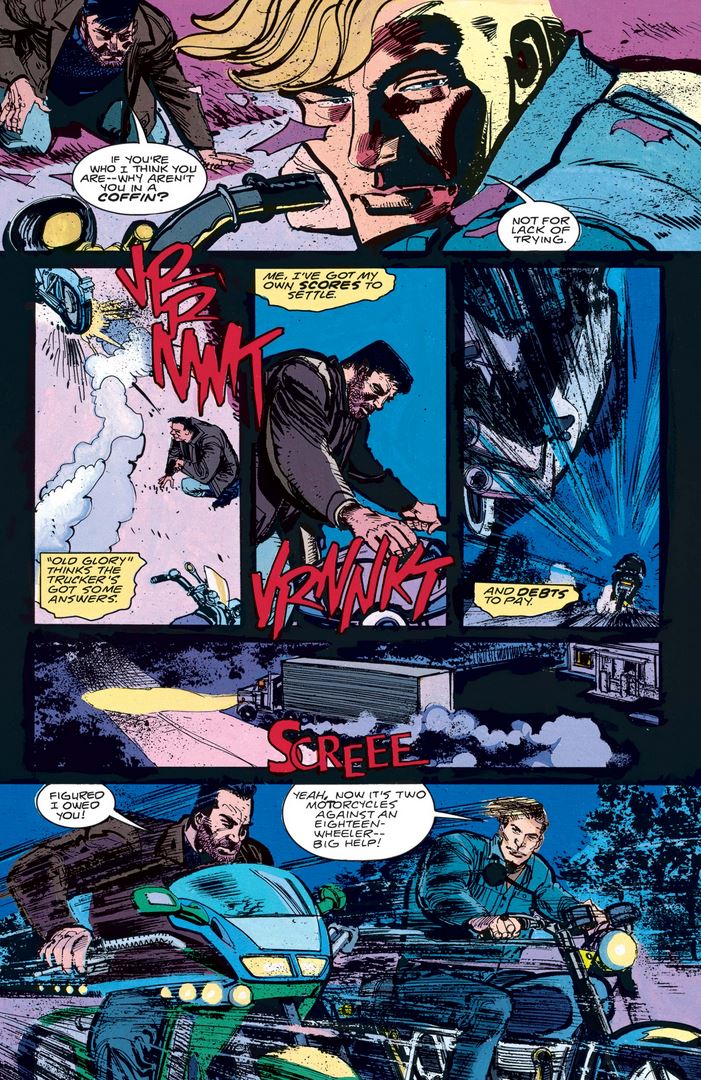 As Cap and Frank face off against the truck—the driver of which, Theopolus, would seem to know who Cap is as well, judging from his tune of choice—our hero reviews the rules of “Chicken.” 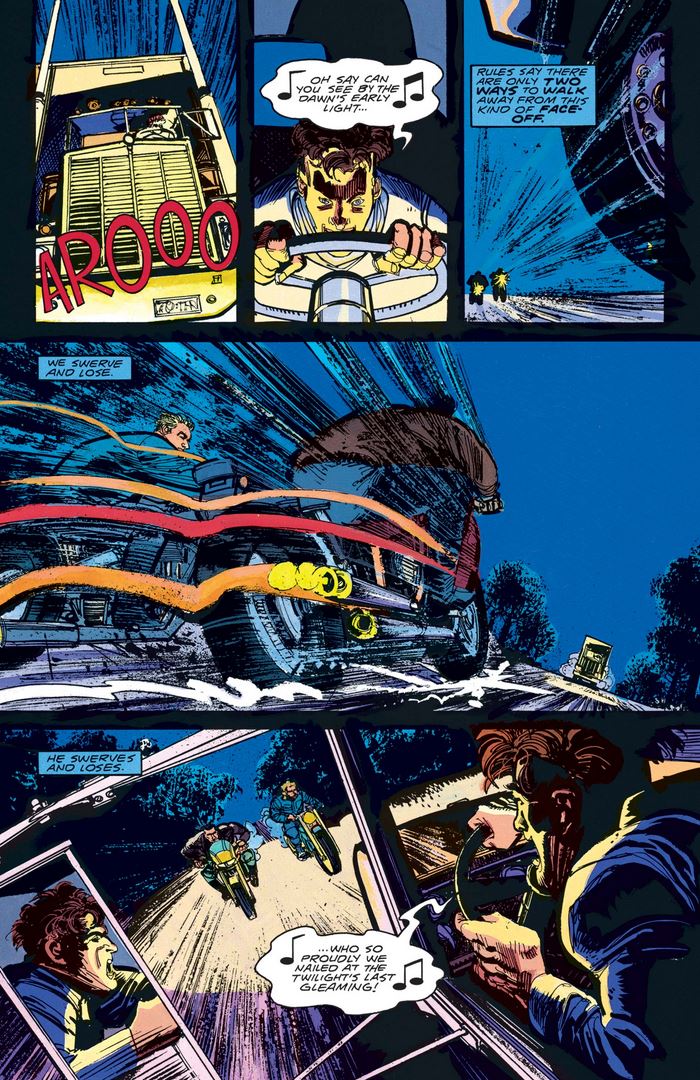 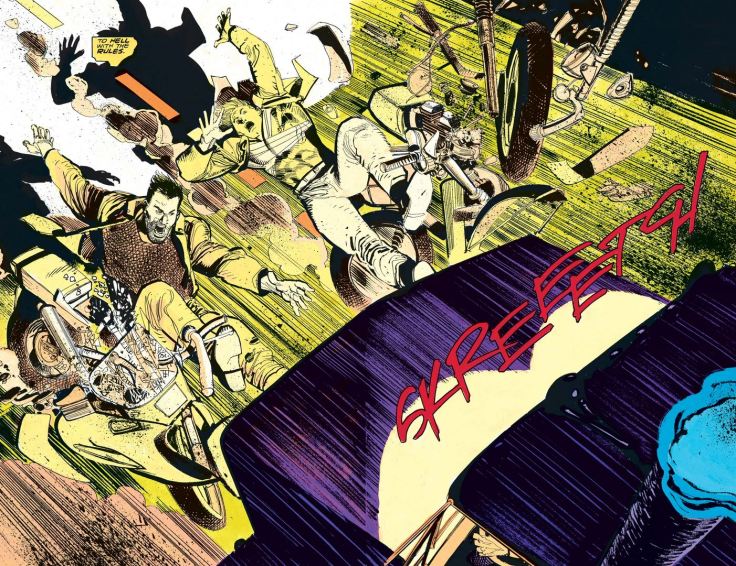 Cap and Frank hold on to the chassis of the truck until Cap can climb into the cab to surprise Theopolus, who recovers quickly enough from his shock to take advantage of Cap’s injuries. 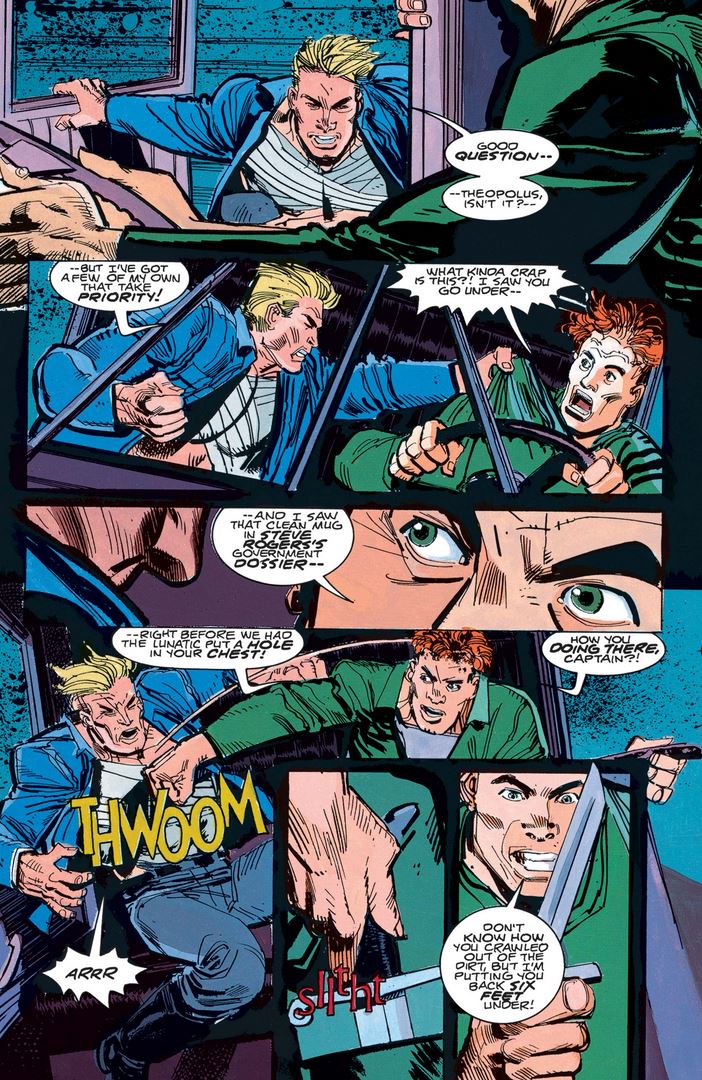 Frank joins them and uses Theopolus’ knife to stab his foot to the gas pedal before he jumps out of the truck, which goes over a cliff and explodes. This finally gives Cap and Frank a chance to talk, with each making his feelings about the other perfectly clear. 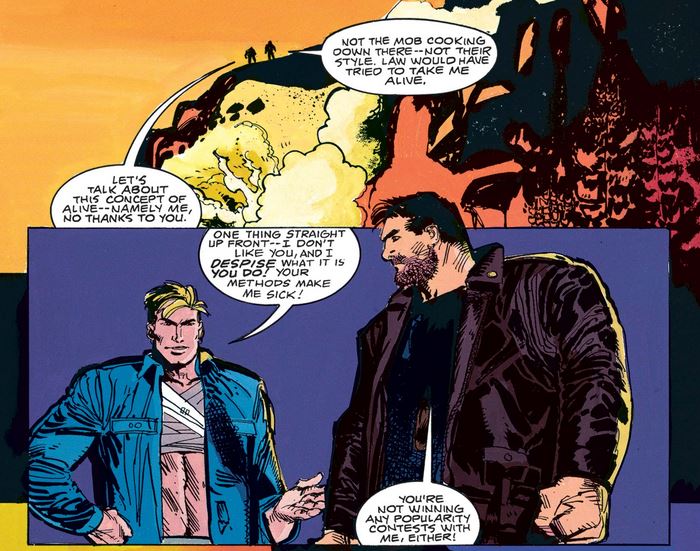 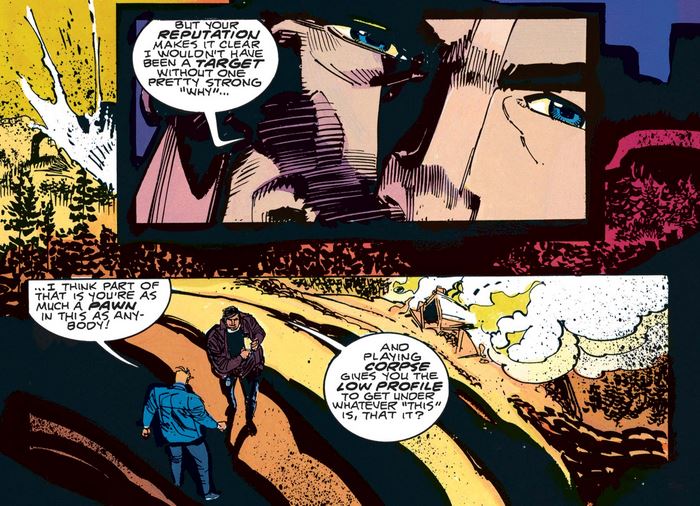 …and Frank fills in more of the gaps before apologizing for, you know, shooting him and all. But Cap isn’t done with him yet. 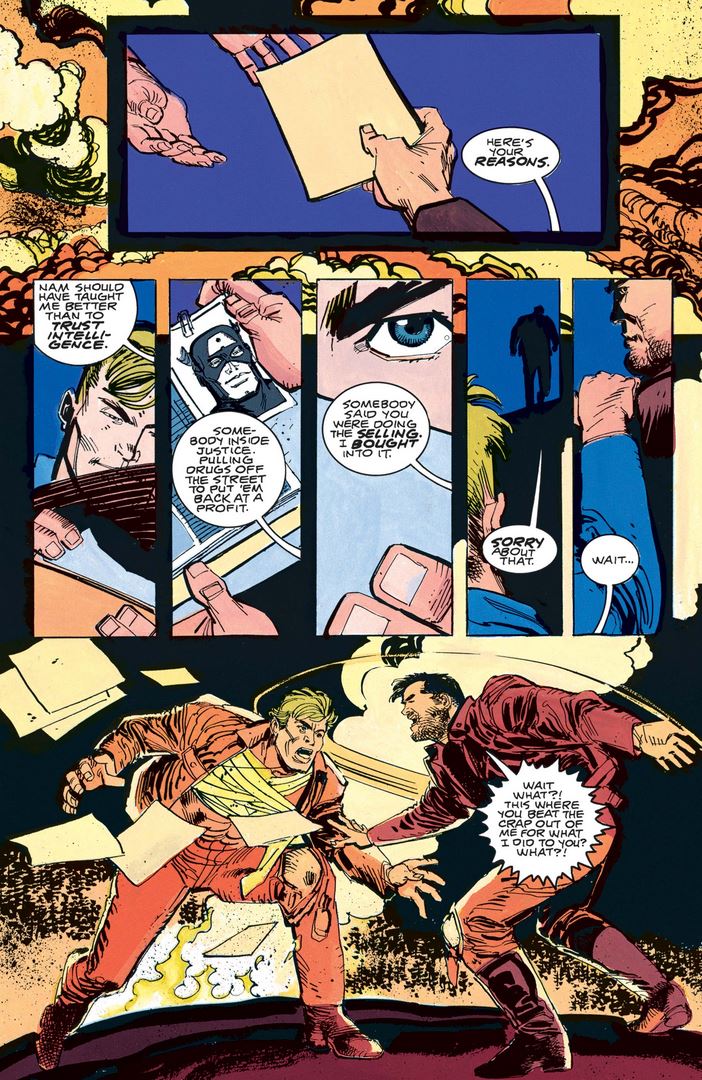 Cap wants Frank’s help in exposing the entire conspiracy, but Frank says no. Cap thinks that reminding Frank of what he did will change his mind… 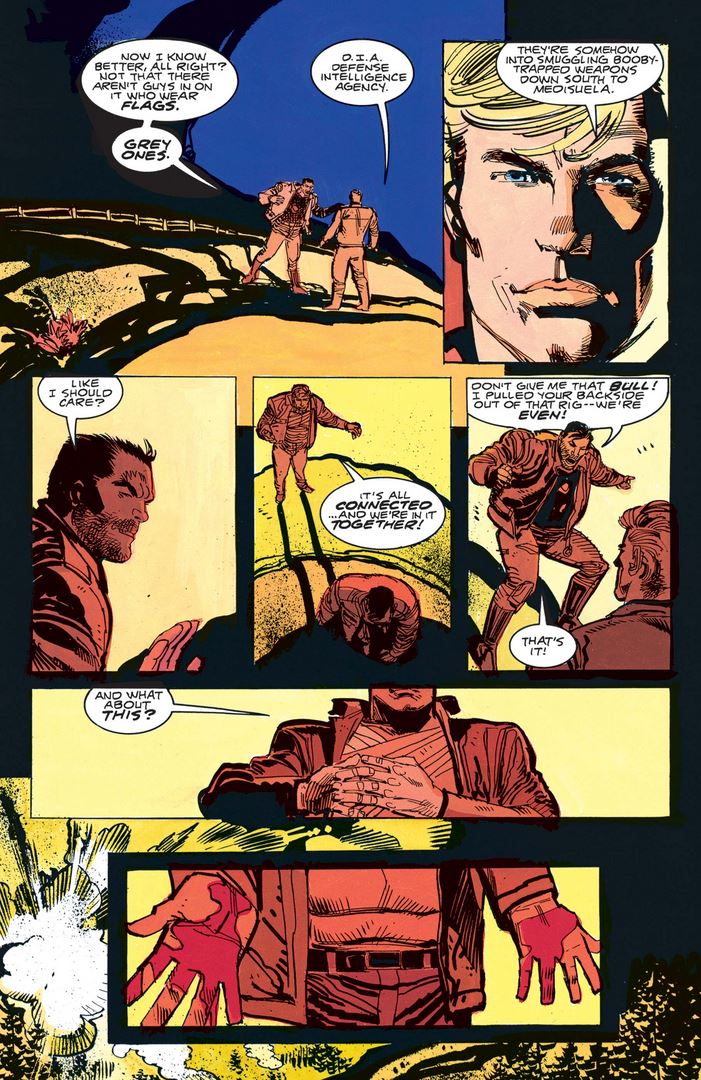 …but Frank has his share of injuries too, from a war Cap wasn’t involved in.

Cap takes Frank’s lead, appealing to the soldier inside him and reminding him that they don’t always get to pick their battles, and this is the argument that gets through. 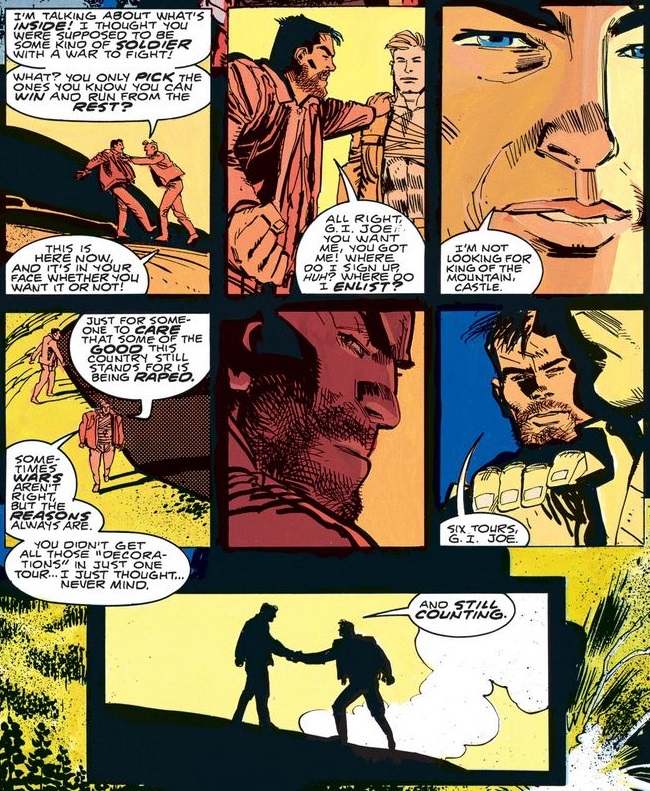 I’m interested in Cap’s statement that “sometimes wars aren’t right, but the reasons always are”: I assume he’s referring to wars that are justified based on the reasons behind it (self-defense or defense of other states or of valuable principles) but conducted immorally (targeting civilians or using disproportionate force). But his statement that “the reasons always are” would seem to grant too much (if taken literally), especially given his negative comments about war in general in the last issue.

Anyway, now that Cap and Frank are partners—don’t tell Sam!—they go undercover to find who’s supplying the faulty weapons to Medisuela, with Cap more open to the possibility of government or military corruption at this point in his career than Frank is. Cap is presumably using his surprising effective “Roger Stevens” alias with Ms. White (no relation)… 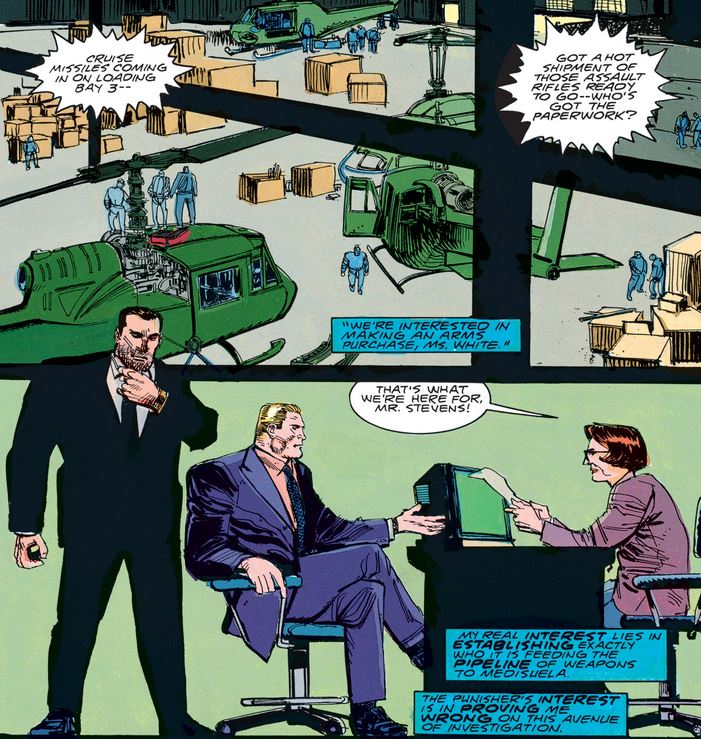 …but regardless of his name, Ms. White is clearly smitten. Unfortunately for her, Cap doesn’t fall for her charms or her offer, regarding her as just another cog in the corrupt machine. 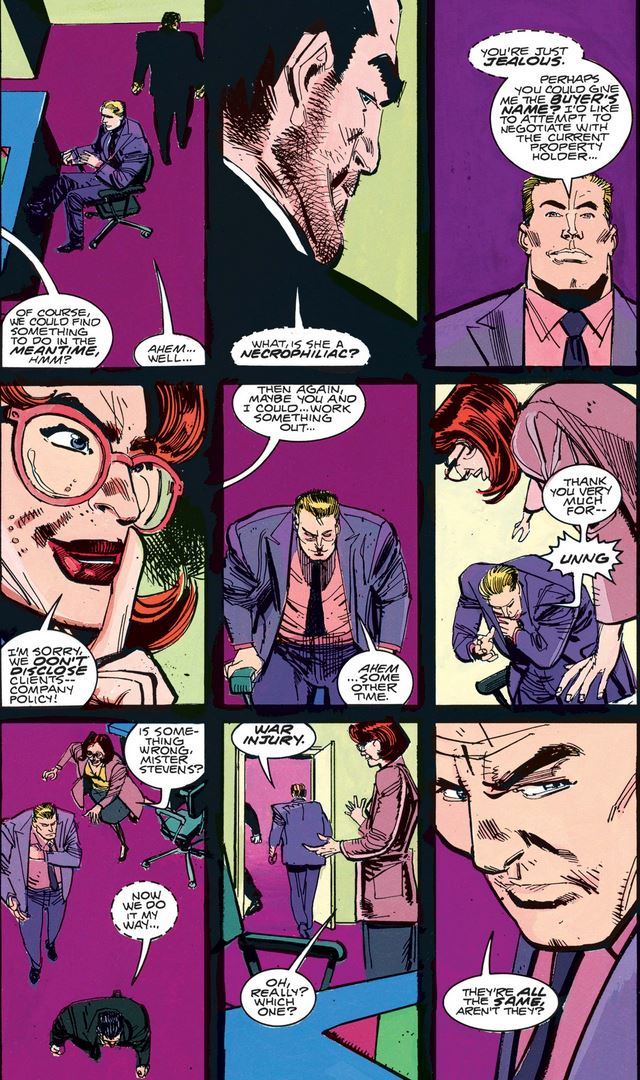 Once back in action, Cap finds himself countering Frank’s more assertive approach with stealth (although I don’t see how reflective material helps one hide in the dark).

Cap appreciates some of Frank’s tactics while disavowing his approach in general, accepting the pragmatic need in the moment to work with him while identifying how deep their differences go. 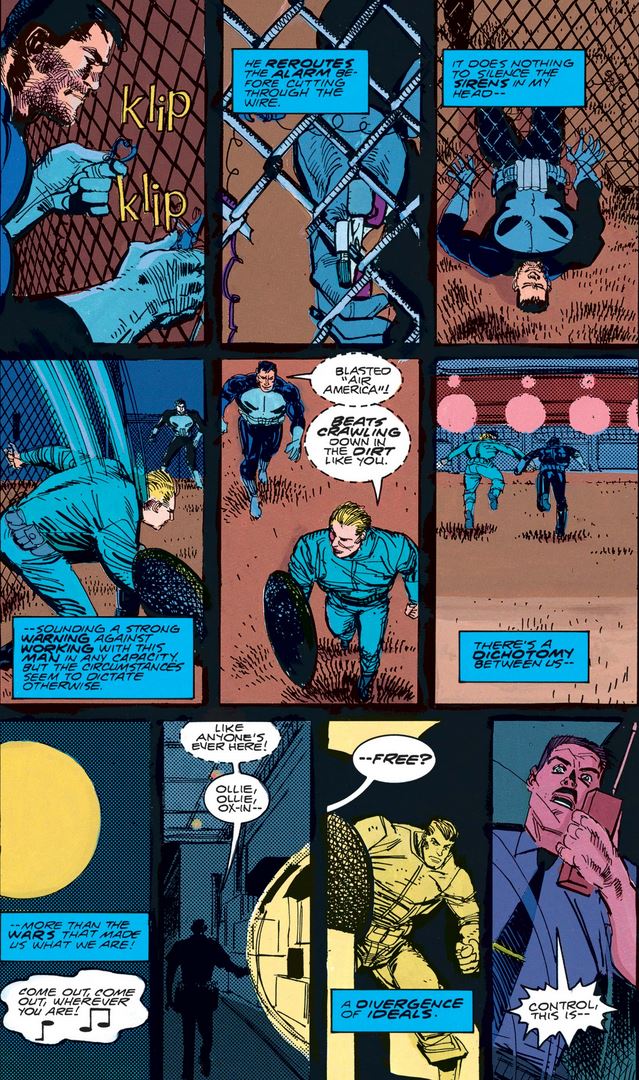 Below, Cap seems to endorse “ends justify the means” reasoning—don’t tell Tony!—but I trust he’s only acknowledging the occasional need to compromise one principle in service of a greater one, such as working with the Punisher to expose a massive government conspiracy. And speaking of that conspiracy, after finding conclusive evidence of it, both men are determined to get to the bottom of it, with Cap putting the stakes in clear terms. 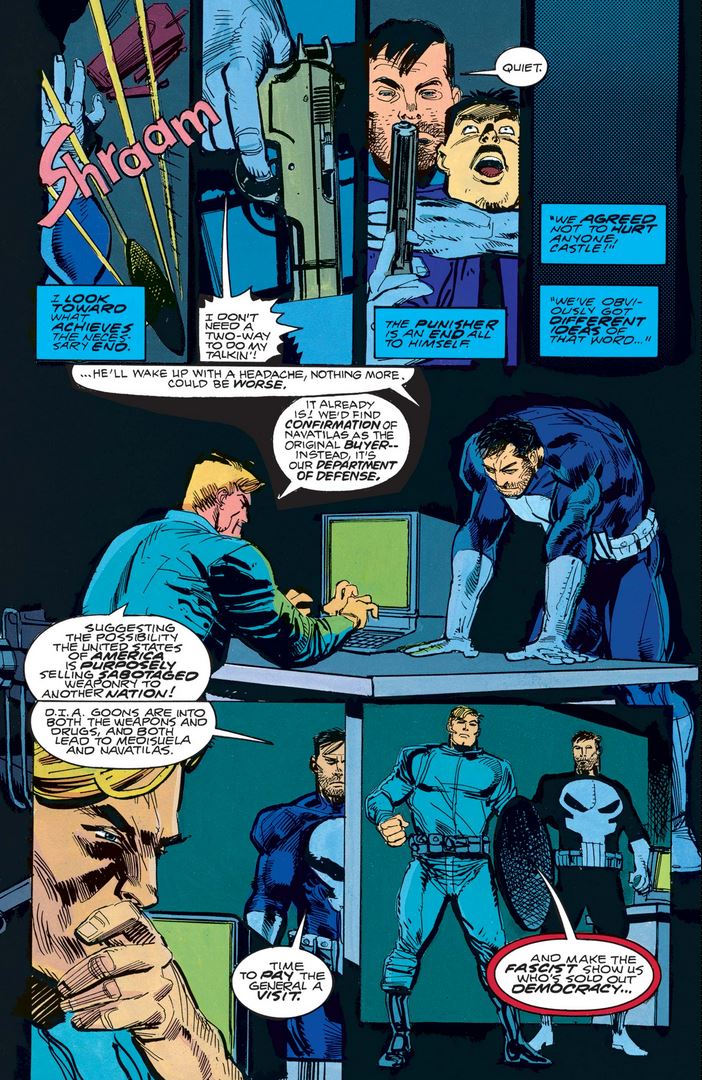 Once in Medisuela, Frank shows off his “Soldier of Fortune” starter pack, and Cap doesn’t even have to smirk in response. 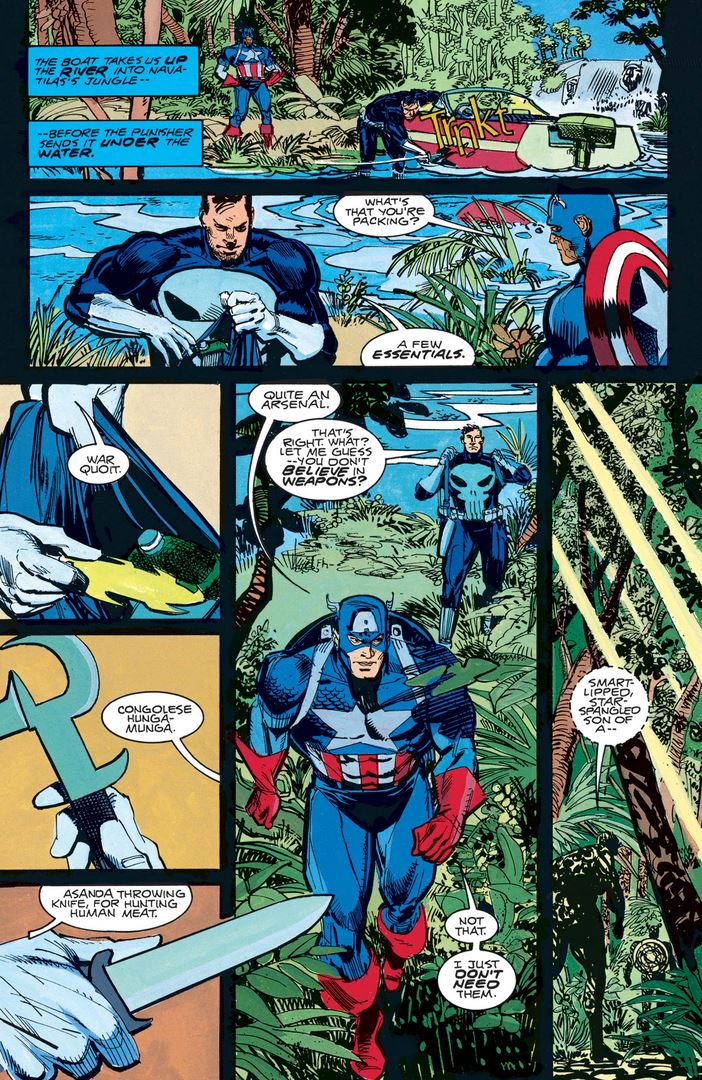 While he muses on the deceptive dead calm in the air, Cap still wonders why the government is supplying an ally (such that they are) with faulty weapons. 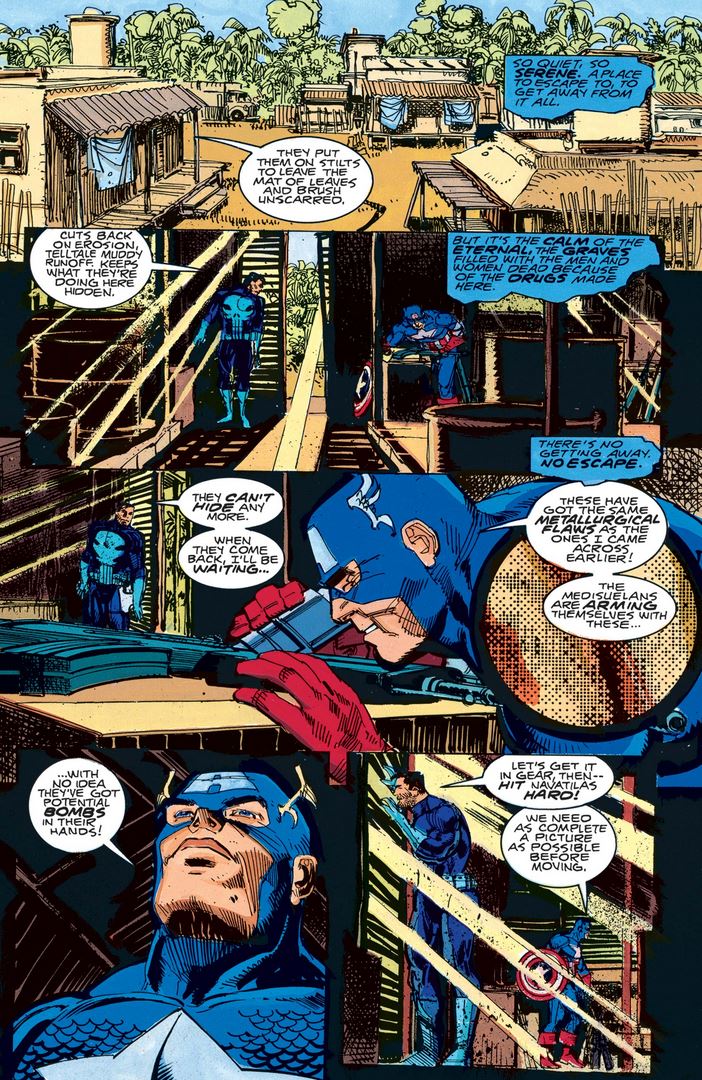 But it turns out this weapons cache in particular will never be used, as both men separately realize the trap they’ve walked into, and Cap sacrifices his ally to save his new partner (again recalling language from the last issue). 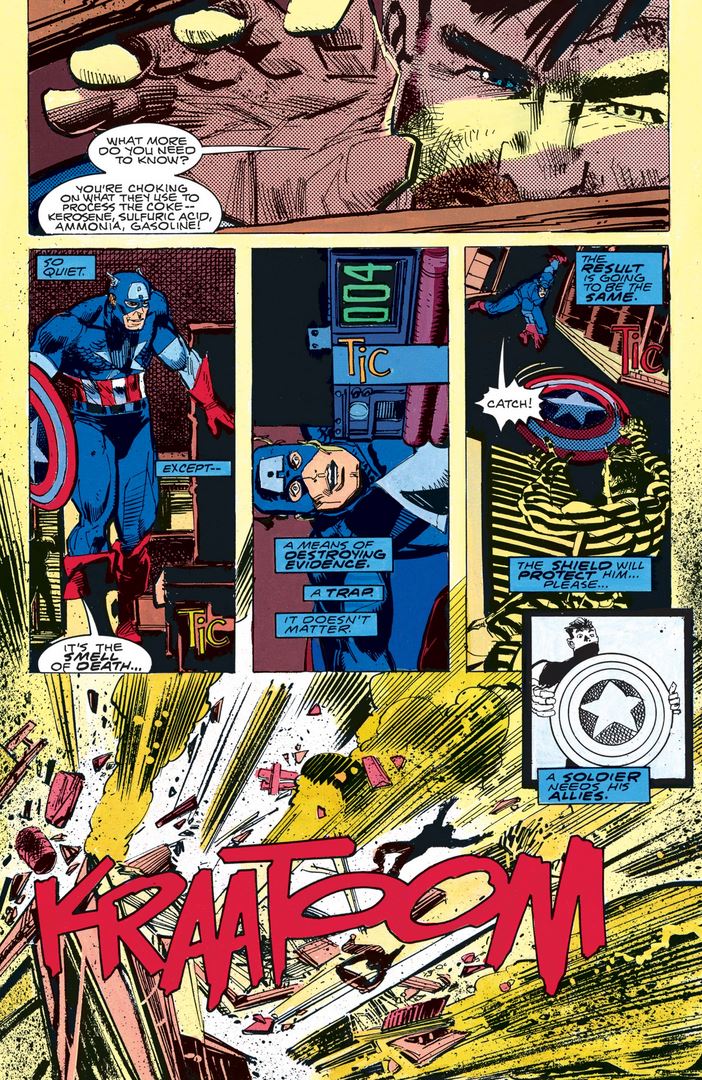 Cap survives, only to be captured by the Navatilas’s men… 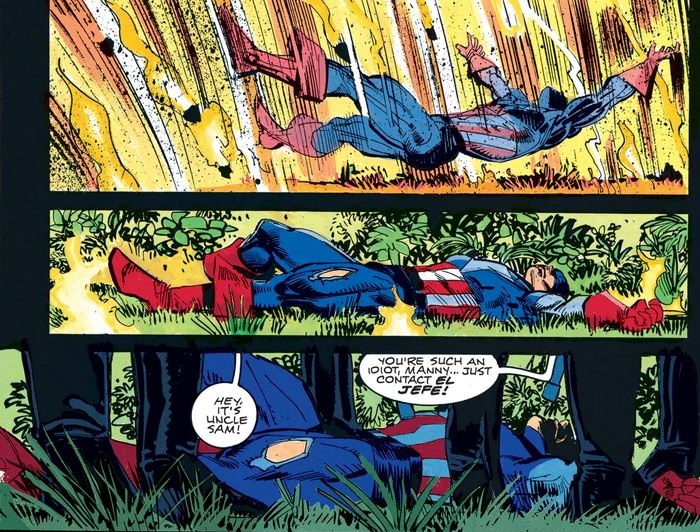 …and the general, alongside his partner, the U.S. attorney general, gives the same order Frank failed to complete at the end of the last issue (while Frank lies unconscious outside). 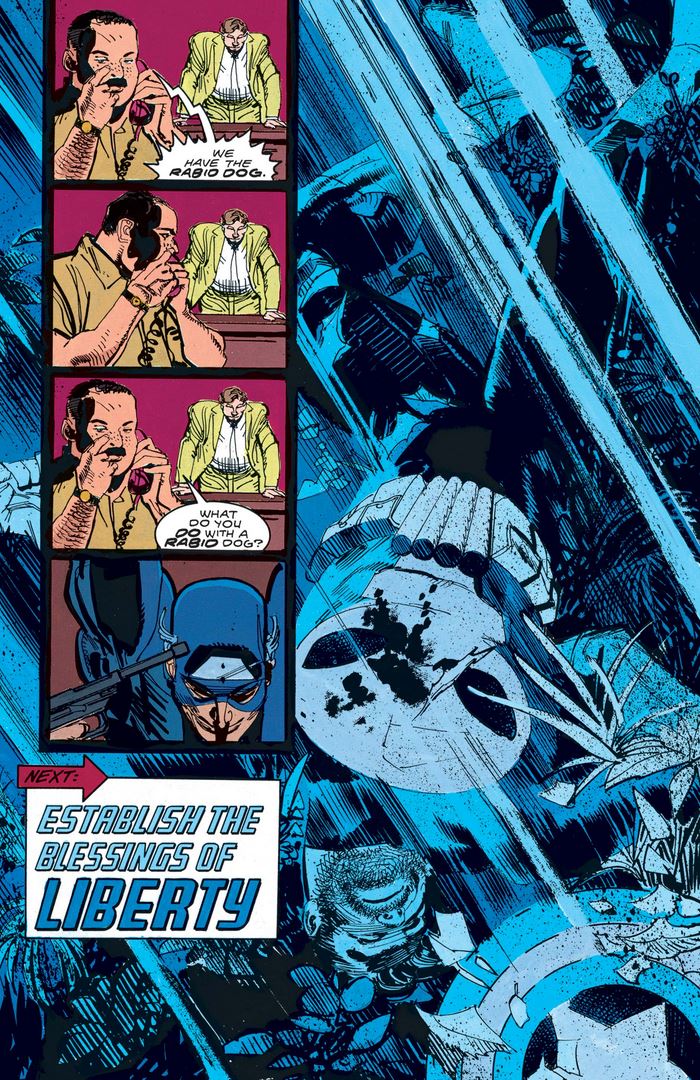 Will Cap survive again? What is the secret behind the government conspiracy in Medisuela? And is Frank having a nice nap? Find out when this story wraps up in the next issue.