Captain America guest-starred alongside fellow Avenger Iron Man in Tales of Suspense #58 before Cap’s regular feature began in #59. This issue is notable for being the first of many battles between the two heroes—and a classic cover to boot—even though this fight resulted from a ruse created by a villain rather than an ideological disagreement (such as the ones surveyed in my books The Virtues of Captain America and A Philosopher Reads Marvel Comics’ Civil War).

OH NO, NOT AGAIN…

When Cap finds Iron Man, he tells him how the Chameleon—a foe of Spider-Man and a master of disguise—captured him and is now out there impersonating him.

But of course, it is the Chameleon himself who told this to Tony, who then unwittingly heads out in search of Cham-Cap and finds the real article instead. (What it is with fake Caps? Remember that a false Cap appeared in a Human Torch story in Strange Adventures #114 months before the real article made his Silver Age debut in Avengers #4.)

The real Cap doesn’t take kindly to being Iron Manhandled…

Note that Cap consistently tries to avoid fighting his fellow Avenger—at least after the initial whack with the shield! After Cap realizes he has to put up a real fight, however reluctantly, Tony’s armor starts running low on energy, and the Armored Avenger has to flee.

Cap thinks it means the entire attack was just a joke. 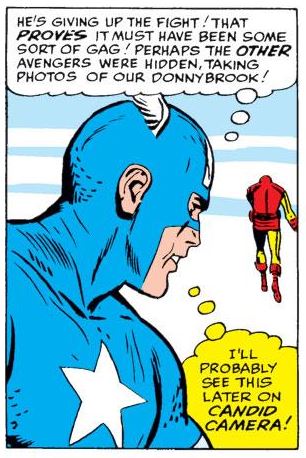 After Iron Man recharged he searches again for the Cap he thinks is really the Chameleon, while Cap tries to hide—and is very generous and patient with an elderly watchman who takes a few shot at him (literally).

When Tony finally finds Cap, he calls him Chameleon—and instead of putting two and two together, Cap instead starts to doubt he’s facing the real Iron Man. (To be fair, “evil doppelganger” is probably the better guess.)

This panel also has my favorite line of the issue: “Iron Man… and Captain America… acting like enemies! It doesn’t seem possible!!”

After all… “aren’t they on the same team?”

You’d think so, wouldn’t you? But we know better.

After Cap saves Happy from falling into a gravel pit, Tony starts to doubt his own grasp of the facts.

Luckily, a giant man arrives with another Captain America, who was driving the steam shovel that attacked Tony… and this, Tony questions. “He’s dressed like Captain America… but why would he attack me?” he asks… as opposed to the Captain America you’ve been fighting for most of this issue, Tony?

Once Tony realizes the truth, Cap takes offense at the fact that Tony was so easily fooled by the criminal impersonator.

To be fair, though, Tony and Cap really haven’t known each other very long at this point. (And it’s not as if Chameleon said “five by five” or anything.)

I’d like to think Tony is winking underneath that helmet.

For the first Iron Man-Captain America battle, this one is heavy on action and thin on rationale, relying on a standard conflict-generating trope all too common to comic book battles between superheroes. I find it enjoyable mainly due to how the onlookers can’t believe these two would fight, when by now we know much better.