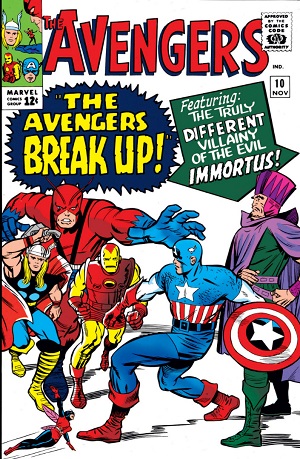 In this story we meet Immortus, a far-flung future version of Kang, with all the time-travel shenanigans you’ve come to expect. (Groan.) But also, we see more physical prowess on the part of Captain America, who also revisits the issue of Rick Jones becoming his new partner (and possibly even an Avenger) and loses control when the young man is kidnapped by Immortus, yet another instance in which Cap lets his anger get the best of him (as it is does quite a bit in these early stories).

Apparently tired of being the only Avengers with any fighting skills whatsoever, Cap has taken to testing his four teammates to see how quickly they can take him (together). 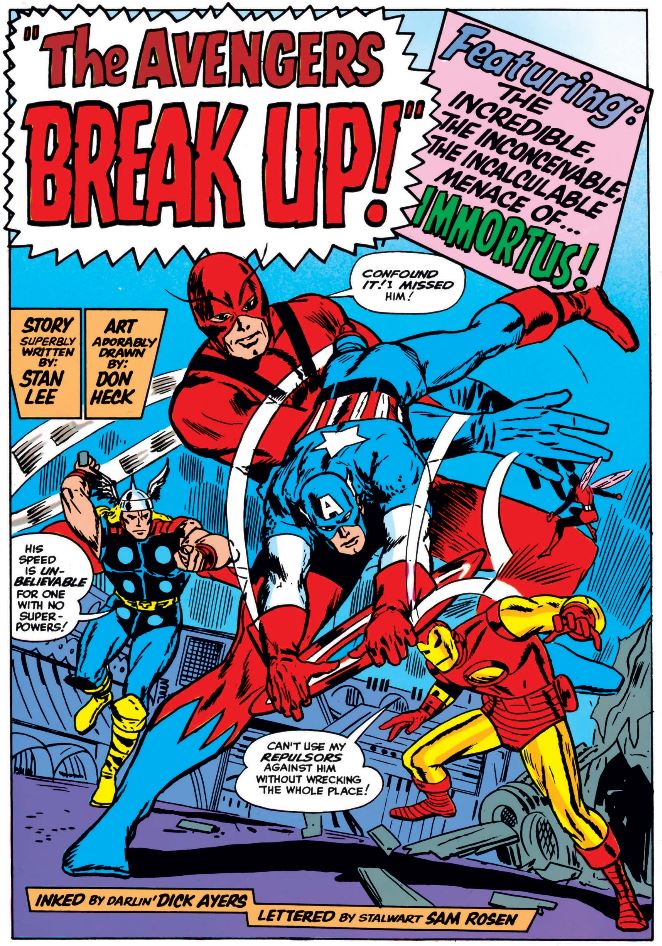 Apparently it takes 47 seconds—although, with moves like shown below, I can’t imagine why Hank doesn’t capture him instantly. 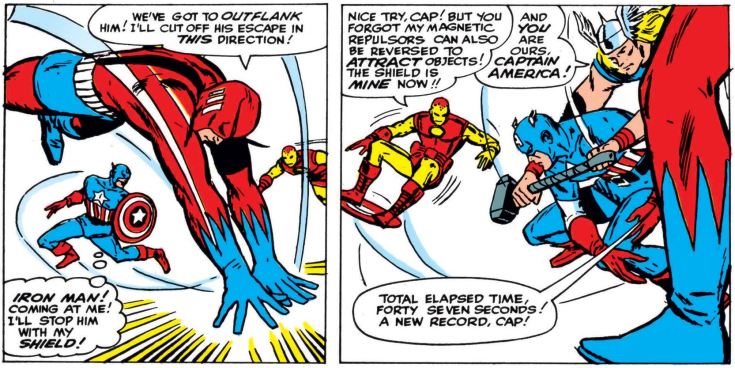 Of course, Cap regards this as a failure on this own part, and thinks he should have been able to hold out for longer… a little longer, at least. (But then he may have had to exert himself!) 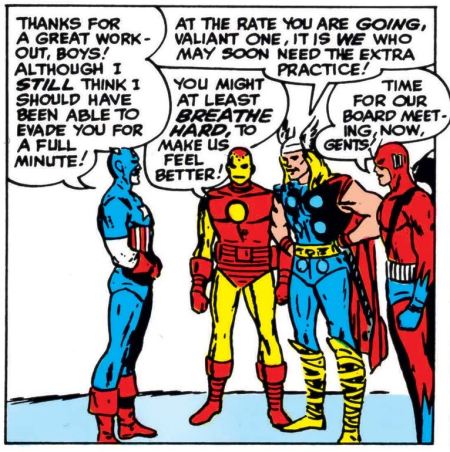 At the boarding meeting Hank is so keen on getting to, Iron Man brings up a perennial topic.

But first… why does Tony single out the Wasp as having “official” membership, as if the rest granted it to her despite her being a founding member (and naming the group)? As it weren’t bad enough that the guys dismiss and devalue her, now they’re considering her a second-class Avenger? There was no indication in earlier issues that her membership was of any less status than the rest… very strange.

Although Tony calls Rick Cap’s “young sidekick” and merely suggests making his Avengers status official and giving him a uniform—taking his relationship to Cap for granted but not mentioning Bucky—Cap obviously takes it very personally and claims authority over the decision. Later, he reiterates his reticence to Rick himself, citing the guilt he still carries over Bucky and how much he fears losing another young partner.

It is this fear that Immortus plays on to break up the Avengers (as the title on the opening splash page proclaims)—or at least siphon off their newest member. After luring Rick to his lair with an ad in the back of a comic book promising super powers, Cap hurries to the address in the ad and confronts Immortus. 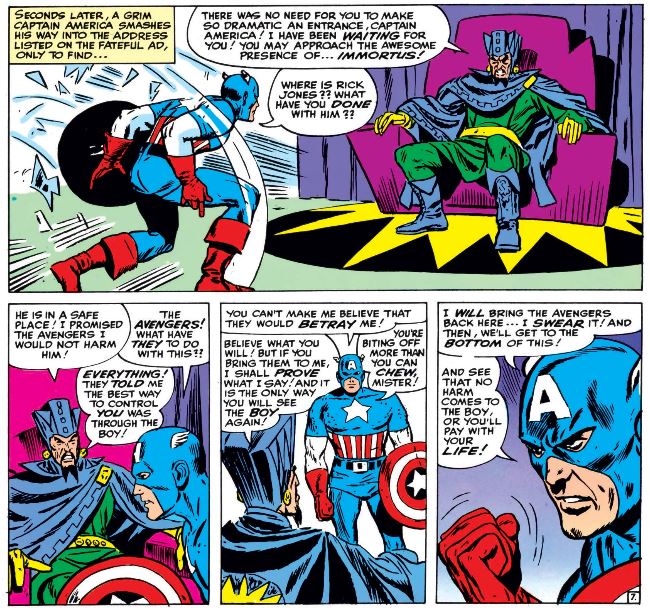 Although Cap claims that he doesn’t buy that the Avengers sold him out, his fear and rage at the thought of losing another young partner nonetheless drive him to attack his fellow Avengers in what is perhaps one of his most gullible moments.

The other Avengers should be commended, however, for recognizing that Cap is not in his right mind.

Well, all except for Thor, who certainly brings to life the saying “when the only tool you have is a hammer, every problem looks like a nail”—and in this case, the problem is Cap. 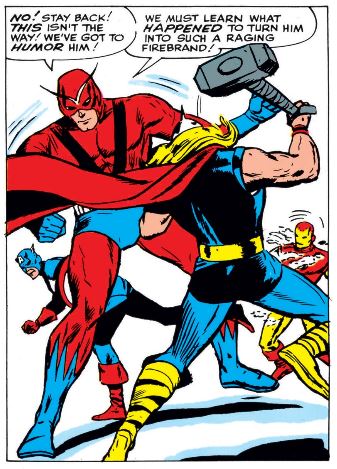 Luckily Hank is there to stop the Prince of Asgard, and the entire team goes to confront Immortus.

This gives us a chance to revisit the Stoic insight (discussed further in The Virtues of Captain America, pp. 54-58) that anger, especially when uncontrolled, corrupts the rational faculties and makes a person careless and rash—which is much more dangerous when that person has super-soldier serum flowing through his veins! As we said before, Cap’s precarious mental state in these early Avengers issues is understandable given all he had recently been through, from Bucky’s loss to his displacement in time. This also explains why he behaves so differently here compared to most of his time in the modern day when he is the exemplar of cool and collected thinking.

Immortus takes Cap into the past with him—he’s Kang, remember, this is what he does—while the other Avengers seem very easily defeated. Hank is ready to give up his membership card, while Tony is optimistic about Cap’s chances wherever or whenever he is.

While Cap battles knights outside the Tower of London in 1760 (where Immortus has imprisoned Rick Jones), the rest of the Avengers (or ex-Avengers?) sit around and mope. 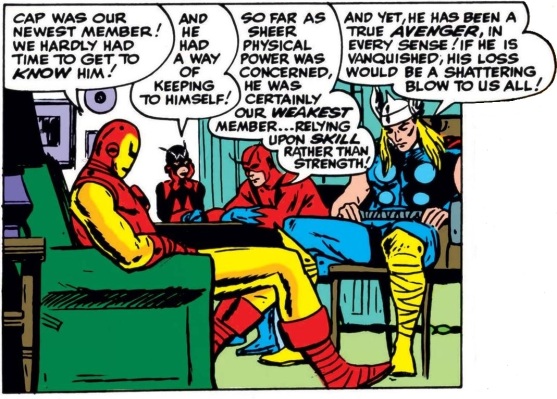 I guess this is what Cap’s friends say when he’s not around: he’s a loner and he’s weak. (Apparently Hank has not been privy to Cap’s many lessons on judo and using leverage against strength.) At least Thor recognizes their lost comrade for what he is, “a true Avenger in every sense.”

This is a quite a contrast to the words of high praise that his fellow heroes proclaim about Cap in later years, once he has become enshrined as a moral leader and source of inspiration in the Marvel Universe. For the time being, though: what a weak loner!

While the remaining Avengers fight Baron Zemo, Enchantress, and the Executioner, a familiar shield flies through the air—with a very convenient explanation that leaves Immortus looking like a swell guy. 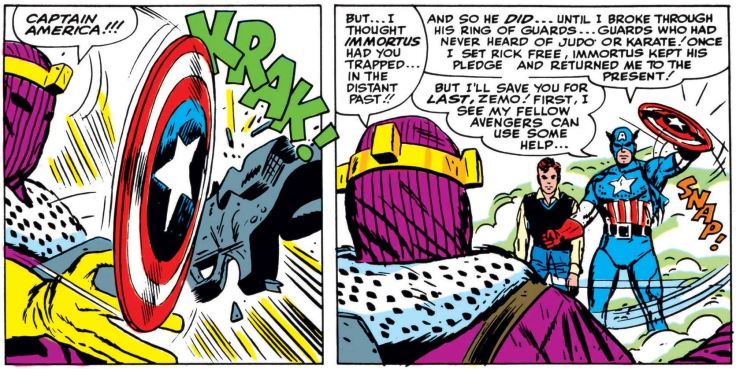 Then he proceeds to help his pals wipe the floor with the villains, displaying a glee not often seen outside his fighting practices. 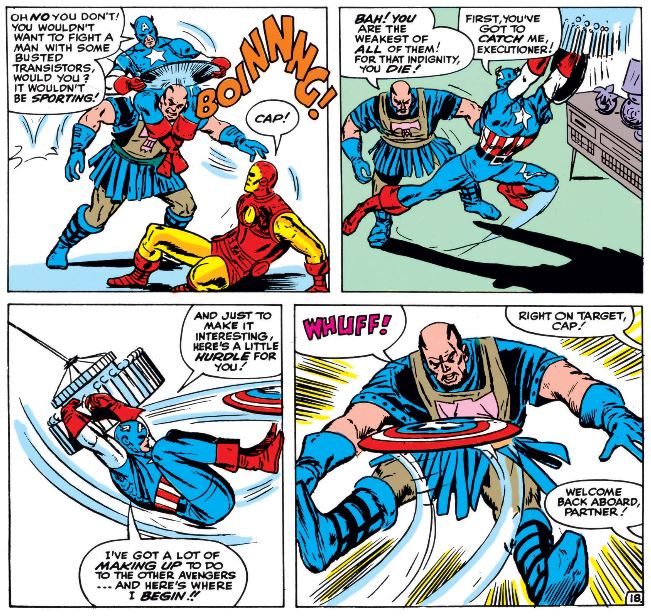 Don Heck doesn’t pencil a fight scene as well as Jack Kirby, but then again, who does? 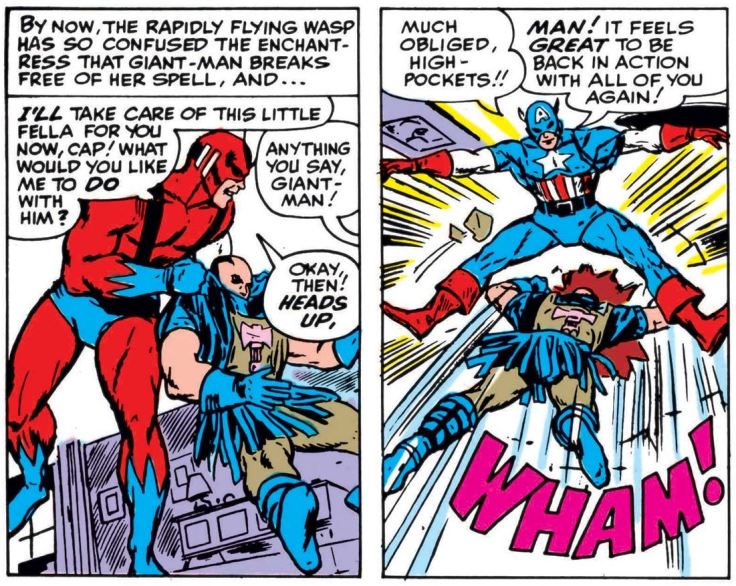 Cap comes down to earth, though, when the Masters of Evil regroup and now have the Avengers on their toes.

Even though this story focuses on Immortus, it is Enchantress who here plays with time, erasing the events with Immortus seen in this issue. (This blog post, however, remains… for now!)

ONE CURIOUS THING (IN TWO PARTS)

Before Immortus takes Cap into the past, he brings warriors from the past to fight the other Avengers, including two who share names with future Avengers. 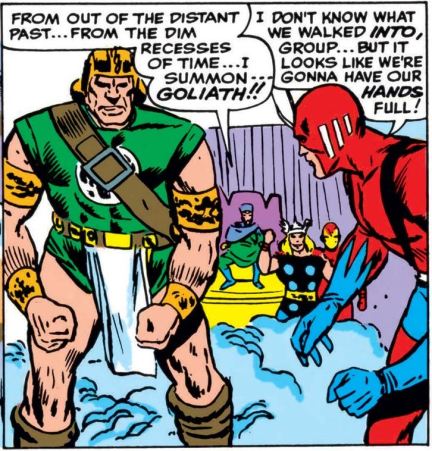 Goliath is the name that many people take up, including Hank Pym and later Clint Barton, when he gives up archery and uses Pym Particles to be the new Hank. (What an auspicious goal that was.)

Hercules, of course, becomes a famous and long-time Avenger (and Champion)—but this Hercules is actually the Space Phantom from Avengers #2 (while Cap was still under ice).

(For what it’s worth, Iron Man confronts the wizard Merlin, whom he would encounter again in his time travels with Doctor Doom, remembered through classic films such as “Road to Camelot.”)

AND ONE PRETTY THING

A Cap pin-up from the King himself! 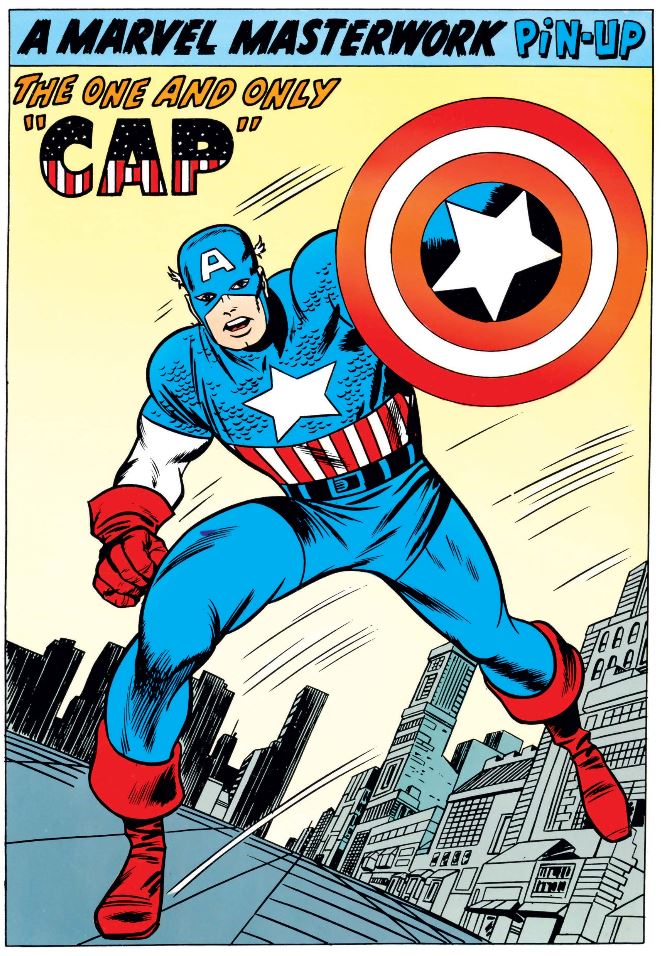